At home in the 'Shoe

At home in the 'Shoe

Ohio Stadium is like a second home to Mary Ann Trapp. She has ties that date back to its creation and has spent every fall Saturday in it for the last 89 seasons.

At 93 years old, Mary Ann Trapp ’50 makes her way to her seat in C deck at the ’Shoe. She’s an off-the-field fan favorite.

“That’s your No. 1 fan right there,” yells one ticket-holder.

“She bleeds Scarlet and Gray,” calls another. “Nobody loves the Buckeyes more.”

On this chilly November afternoon, the Buckeyes will take on the Terrapins, but it’s a scene Trapp clearly knows well regardless of the opponent. It’s the second-to-last game of her 89th consecutive season in the stands. 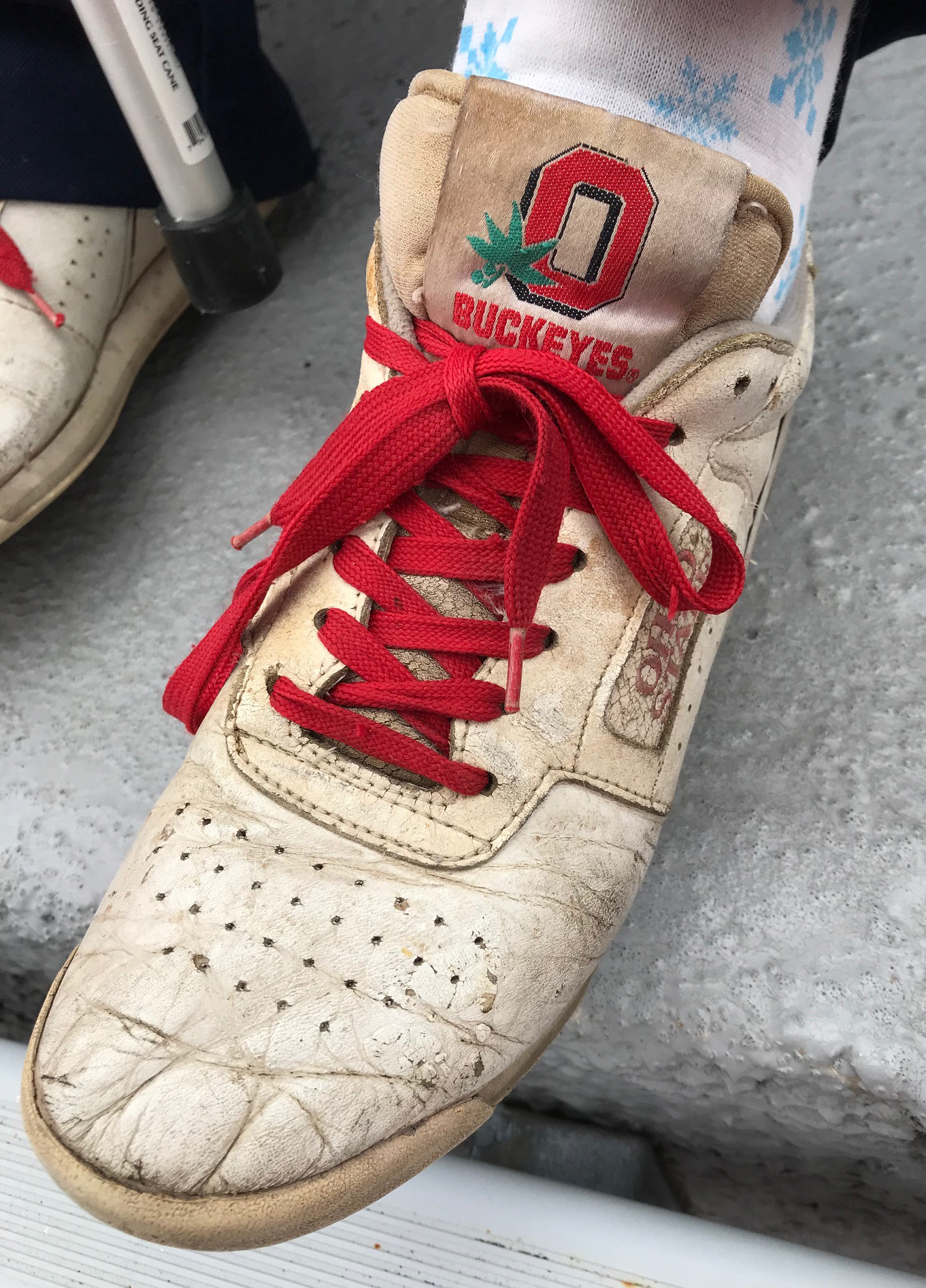 Shoes worn by Trapp at the 2019 Ohio State vs. Maryland game.

Dressed head-to-toe in Buckeye garb, she settles into her bleacher seat right on time for Script Ohio. She’s been there since the 1936 beginning of the TBDBITL tradition.

“I don’t remember much from that one,” Trapp laughs. “That game was a long time ago, almost 80-some years. I just know I’ve liked [Script Ohio] from the beginning.”

Trapp was 4 when she attended her first game with her parents. Her father, Clarence Trapp, had worked as a contractor’s general superintendent in charge of building Ohio Stadium from the summer of 1921 through fall of 1922.

“We’d get 20 or so tickets every year because of it,” Trapp says. “He divvied them out to friends who helped him on the job, but he would always keep some for us.”

Trapp attended all home games with her parents until she was able to get student tickets with her enrollment in 1947.

She preferred the student section, which offered a better vantage point. She recalls one of the more exciting games — the famous 1950 Snow Bowl against Michigan.

“That game was so cold,” Trapp says, shivering at the memory. “There was snow everywhere. They had to sweep the goal line before the start of the game.

The outcome of that game made it even colder.

“Michigan never made a first down. [They] blocked a kick and beat us. Can you imagine that? No first downs and they beat us!”

The Wolverine’s 9-3 victory sent them to the Rose Bowl, a win that lives on in college football lore and Trapp’s mental scrapbook of Buckeye football.

Trapp has seen all six of Ohio State’s Heisman winners in action, all eight national championship teams the program has fielded and all but one of Ohio State’s victories against Michigan inside Ohio Stadium (1928). 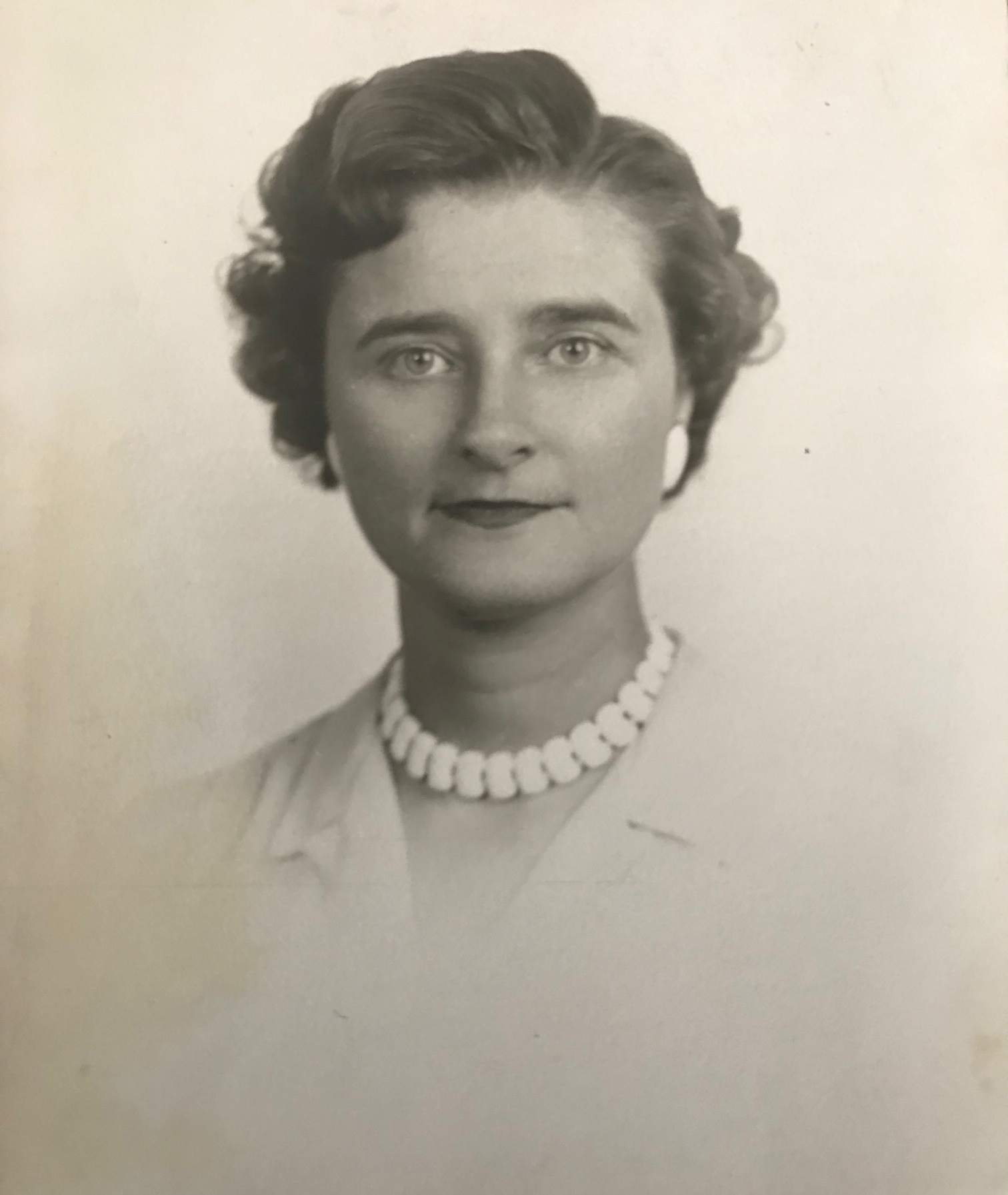 Trapp’s father, Clarence, had a 50-year attendance streak of his own before his passing in 1982. She notes that the Buckeye doesn’t fall far from the tree.

“It’s a very proud feeling to know that my family has played a role in so much history on Ohio State’s campus,” she says.

Like her father, Mary Ann attended Ohio State’s School of Engineering, focusing on architecture. It was always her first choice to be a Buckeye.

“When I was in high school, I might’ve thought about going to Notre Dame,” Trapp says in reference to the university’s highly regarded architecture program. “But they didn’t admit undergraduate girls. So it was always going to be Ohio State.”

The fact that Notre Dame didn’t admit women as undergraduates until the early 1970s was a sign of the times, according to Trapp. Engineering, specifically architecture, was a male-dominated profession at the time.

Upon graduation, she joined Trapp Construction, her father’s namesake business, as the company estimator. She advised her father on project plans and calculated quantities for the materials needed.

“We built everything from schools to churches and everything in between,” she says. “I’d give dad the estimate for us to make a profit, and he’d put in the bids for labor and supplies.”

Trapped worked with her dad for nearly 30 years before he closed the company in the late 1970s. She went on to work at another Columbus-based architectural business until she retired in 2014 at the age of 88.

To stay busy outside of Buckeye football, Trapp cares for her dog and pays weekly visits to friends in nursing homes.

She also keeps a close eye on the Ohio State men’s basketball team. Amazingly, she says she’s attended all of its home games since 1973.

Trapp also remains connected to the university’s architecture program. The Knowlton School awards an annual scholarship in her name.

“You know a lot of kids need a little help to achieve their dreams,” Trapp says of the fund she established in 1975.

But Trapp admits that she doesn’t quite have perfect attendance at Ohio Stadium. She’s been to just 545 of the 546 home games that Ohio State has played since 1931.

“There was a game while I was in school that I missed,” Trapp says. “Two girls I knew were going on a trip to Australia. They wanted me to go along. I originally said no because I didn’t want to miss the game.”

Sadly, one of the girls passed away before the trip, causing her to change her mind and accompany her friend.

The two would became travel companions and tour the world together for the next 40 years. But only under one condition, Trapp says:

“Anytime but the fall.”