Bill Hildebolt ’66, ’67 MS, ’69 PhD rose to the position of vice president of research and development during his 15 years at Campbell Soup Co. Later, he also was an executive at R.J. Reynolds Tobacco Co., and now runs a biologically based lawn-care business in North Carolina.

Cooking up a leading brand

Bill Hildebolt ’66, ’67 MS, ’69 PhD writes the book on the creation of Prego spaghetti sauce and the role he and others had in its inception.

Bill Hildebolt ’66, ’67 MS, ’69 PhD ventured from his family’s 200-year-old farm in Preble County to The Ohio State University by selling his 4-H steers to pay for his first two years of undergraduate school. He hoped to create a legacy of his own, and that’s exactly what he’s done.

Among his many achievements academically and professionally, his distinguished career as a product developer at Campbell Soup Co. led him to co-write a book with Ohio State alumna Bonnie Bajorek Daneker ’89 about the creation of Prego spaghetti sauce. 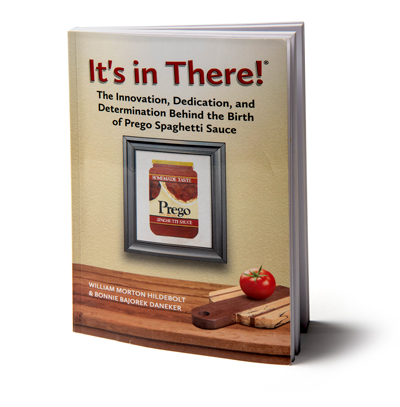 It’s In There! is for sale through The Ohio State University Press and other retail outlets. 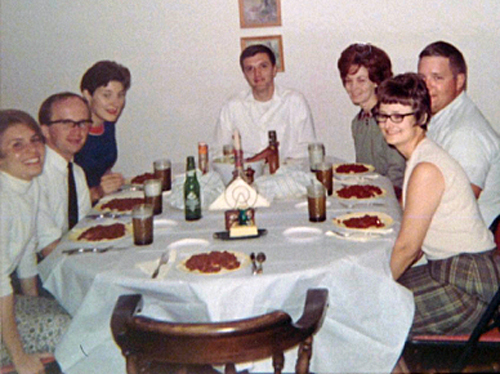 Bill Hildebolt credits this spaghetti dinner with fellow graduate students at The Ohio State University with inspiring Prego — a jarred pasta sauce that, unlike homemade, wouldn’t “weep” unattractive liquid on the plate.

As research and development lead for the Prego project, Hildebolt set off to write It’s In There! The Innovation, Dedication and Determination Behind the Birth of Prego Spaghetti Sauce, a book about the history of the iconic sauce and the people who pioneered its production.

It’s in There! reflects his time at Campbell’s, giving readers an inside look at the famed company while including the struggles and triumphs that led Prego to become the household name it is today.

Inspired by a scholarship from the Ohio Canners Association he received during his undergraduate years, Hildebolt has found a way for agriculture students to benefit from the book: He is donating all proceeds to green-industry scholarships at Ohio State.

“To me, giving back to students is one of the best investments you can make — and one of the most satisfying,” says Hildebolt. “It also gives me the opportunity to sit down and talk with students and every student I’ve met is unbelievable — I’m just awed by them.”

After earning his bachelor’s degree in food science and technology and his master’s and PhD in horticulture, Hildebolt began working at Campbell’s when a professor recommended him for the job. Beginning as an entry-level research technician, he rose to vice president of research and development in his 15 years with the company.

In an excerpt from It’s in There!, we’ll join Hildebolt as a young, ambitious food researcher and dive into Campbell’s “shark tank,” where his instant pumpkin pie idea faces the respected (and feared) Product Committee.

With my knowledge of the history of Campbell Soup Co. (CSC) and ideas for new products, I eagerly continued on my first few weeks of work. True to his word, CSC Vice President of Product Development Ralph Miller allowed Don Maley and me to work on whatever projects we could conceive, if they had anything to do with food. This was a promise that had lured me to Camden (New Jersey) and the CSC in the first place.

In the beginning, it was a dream come true. We were surrounded by world-class talent and equipment to create anything we could envision. This was easier said than done, and I spent many sleepless nights the first weeks trying to think up ideas for new foods, to no avail. Maley and I struggled for weeks working on some of his ideas and then mine. However, after many attempts of trying to develop a new product, all we had a show for it were messy lab counters and full garbage bins. When we exhausted our product ideas, I resorted to asking anyone I knew, both inside and outside the company — including my mother-in-law — and nothing surfaced.

My dream scenario was rapidly filling with frustration and anxiety. The reality of the situation is that it is difficult to innovate new products even when you have experience, and it’s nearly impossible when you have had no experience. My college education in food technology/science focused on understanding the fundamentals of biology, chemistry, microbiology, nutrition, food processing, and safety. There was no formal training in product or process development. I was well equipped to do directed food research and to solve engineering-type problems, but the creative elements of product and process development were beyond my capabilities. Ironically, for a food technologist but typical of men of that era, I didn’t even know how to cook.

My boss remained pleasantly nonchalant concerning any lack of progress on our part, clearly a reflection of his own time as a researcher. This would later dramatically change as I advanced in my career; but for now, he was supportive and encouraged us to work on anything we thought had value. By the end of the month, I was becoming desperate and realized that working without a product portfolio was not going to build much of a résumé.

Then a seasonal inspiration occurred. It was November, with Thanksgiving rapidly approaching, and pumpkins were plentiful in southern New Jersey. Having worked with a freeze dryer during my graduate studies, the concept of a dehydrated, instant pumpkin pie mix was born. We added the classic ingredients to the pumpkin purée for the filling, then freeze-dried them. The customer could just add water, place it in a pie shell, and bake.

The pie could be mixed in a matter of minutes, and after baking it, it was as good as if it were made entirely from scratch. This was a departure from the popular canned-filling approach to making a pie. When Maley and I showed the prototype to Miller, he complimented us on its novelty and good taste. A few days later, he informed us that he had scheduled a showing of our “instant pumpkin pie mix” to the famed Product Committee. In doing so, Miller was helping us to gain experience and be introduced to the executives comprising the committee. The president at the time was William Beverly “Bev” Murphy, a legend in the food industry who had taken CSC from a specialty canner to a broad-based food processing leader. His executive team was imposing, and I was appropriately anxious.

Product showings to the executive staff were a life-and-death drama played out in a corporate conference room. Surrounded by white porcelain-tiled walls, we stood around a Formica-covered tabletop on a beige linoleum floor — no chairs were allowed in the Product Committee Room. The committee consisted of the CEO, president, CFO, and multiple VPs, as well as the presidents of the respective division responsible for the product being presented and shown, plus the manager/technologist presenting the product. This is where dreams came to fly or die. A product developer could work six months to a year on a new product concept, only to have a stake driven into its heart with thumbs down from the committee, all in a matter of minutes. All authorizations for product improvements, new product launches, and product-related capital expenditures were determined by the Product Committee. Careers were made or broken in this small, sterile conference room.

The product development manager or the product technologist would present the product or process request along with samples of the product for taste testing. The presenters would field questions and, if necessary, the marketing managers would provide market research data and the engineering costs. On most decisions, everyone followed the lead of the president. But on occasion the manufacturing and sales executives would take a stand on issues of concern. Everyone had a vote, although some were weightier than others. The CEO, John T. Dorrance Jr., had a veto vote, but he normally remained in the background and did not impose his will unless it was a major policy decision. A formal protocol was followed and to the newly initiated, this was high drama.

The reality show called “Shark Tank” is designed to closely represent the interaction of venture capitalists and entrepreneurs, and it also captures the dynamics of a CSC Product Committee showing. The executives are the sharks and the product developers the entrepreneurs. The stage, however, is different. In the TV version, the investors are all sitting down in overstuffed, leather chairs on a hardwood floor covered with an Oriental rug, and at least three of the sharks are billionaires. In our Product Committee Room, everyone stood and only one of the participants was a billionaire, but the tension and the politicking among the investors traversed a very similar path. The investors ask pointed questions regarding the possible investment of their money and demand assurances from the entrepreneur that their investment will yield positive returns. The TV entrepreneurs and CSC product developers defend their brainchild and make implied promises in an identical manner. In both scenarios, those who best sell their vision usually win support and financial backing.

I was early for my presentation time. As a result, I was able to witness the prior presentation and very serious discussion on canned puddings. In the 1950s, CSC had pioneered canned puddings under their Bounty brand. The chocolate and vanilla flavored puddings were reasonably good and had established a dominant market share. Recently, several competitors had entered the market utilizing artificial ingredients such as colors, stabilizers, and flavorings. The competing products were superior in mouthfeel, color, and flavor; thus, their overall appeal was superior to the Bounty puddings (which were formulated under the CSC self-imposed restriction of not using any non-natural ingredients). The predictable results showed the former market leader was getting clobbered by the newcomers. Sales were falling faster than a soufflé in an earthquake.

Management had two choices: One was to reformulate the product using the best of modern food chemistry, the other to discontinue the line. After much discussion on the course of action, the son of the inventor of condensed soup and founding father of the CSC, John T. Dorrance Jr., spoke up. In his quiet voice and demeanor, the CEO stated that he would prefer to discontinue this business than to compromise his father’s long-standing policy of using natural ingredients. Everyone nodded their heads in agreement. With one word from Dorrance, the well-established, revenue-generating Bounty pudding line was terminated, and then-President Bev Murphy signed its death sentence. This seared into me the concept of product integrity and exponentially grew my respect for the company.

Energized and humbled at the same time, I approached the table to present. I was nervous and excited, and even more proud of working for the company, but had just seen the efforts of the other product technologists deflated instantly before me. I presented our idea, and showed them the before and after, even providing the cooked final product. Though they acknowledged this as a unique concept and tasty pie, they did not deem the project worthy of additional work. After all the discussion about the pudding, I felt my effort of instant, dehydrated pumpkin pie was anti-climactic; in a quarter of the time they spent on the pudding, my project was shelved. I had gotten off easy — my baptism in the shark tank was more like swimming with dolphins than sharks. That experience, like a lot of other things, would change in the near future.

Later, I realized that as good tasting and convenient as my product was, the product did not fit into any existing CSC product category line. It wouldn’t have made sense for the company to go forward on a concept of this kind, but it was excellent learning for me.

It’s In There! is for sale through The Ohio State University Press and select retail outlets.

Kaylin Hynes is a senior studying journalism at The Ohio State University. She’s the copy desk chief at The Lantern.