In recognition of the 50th anniversary of the events of 1968, which shaped both Ohio State and the nation, we’re dedicating this edition’s letters to voices from that year.

Alumni came down on all sides of the issues that faced our nation in the late 1960s. When those stances concerned the statements and actions of their alma mater’s students, administrators and faculty, many graduates expressed their views in letters to The Ohio State University Monthly alumni magazine. These excerpts from 1968 represent a range of the opinions shared.

To discover more about the lessons and legacy of 1968 at Ohio State, explore videos and other interactive content.

Update from the front

I am enclosing $8 for my annual dues. For the past week, I have been dodging bullets and mortar fire in Saigon. For two days, I could not get out of my room. Other than that, I am the deputy staff judge advocate, Hq. 7th Air Force, Tan Son Nhut AB, Vietnam. Look forward to visiting the campus in September.

1965 graduate with a master’s in business administration

Anyone who looks carefully at the empirical evidence relative to the issues of poverty, race relations, the implementation of international affairs and war, the functioning of educational institutions or any of a number of current social problems soon is impressed by the urgency of finding workable answers to these kinds of questions.

It is also apparent that the response of our society has been incredibly slow and painful. Perhaps because of the laggardly social responses, some members of our college generation have acted with impatience and [irresponsibility]. But their response, no matter how violent or irresponsible, is a response to frustration. Frustration over some urgent and undeniable social difficulties demands a response.

So, I ask, do we, who make the claim for ourselves of social responsibility and decency, provide viable responses to this kind of frustration? If a suitable counter-offense against “student unrest” and foment from activist, militant student groups is to be launched, then the problems with which they are frustrated must be confronted realistically by the responsible majority.

A vote for compulsory ROTC

We still shudder over the [April 26, 1968] incident of a student group defying law and order, invading administrative offices, holding a university vice president captive and releasing him only after he recorded his surrender to a list of demands.

Still more disturbing is to note that there was a question as to whether expulsion of the rebels could even
be considered.

This incident should certainly provide strong argument for restoring a compulsory ROTC program featuring the teaching of discipline and respect for constituted authority. It’s obvious the academic program is deficient in
that area.

1929 graduate with a bachelor’s in journalism

As an aging alumnus and member of The Apathetic Generation, I am frequently saddened by the lack of student activism on the Ohio State campus. Accordingly, I was pleased to read in the May 1968 Monthly of the “Black Friday” success of the Black Student Union.

In spite of more typical Ohio State statements elsewhere in the same Monthly (for example, that “obedience to law is freedom”), it is refreshing to know that there are students in Columbus who have learned there is no freedom without justice. More power to the BSU! Perhaps the rest of the university can learn from them.

Now, if only something could be done about integrating the board of trustees and the university administration.

Alumnus with bachelor’s and master’s degrees in biological sciences, earned in 1952 and 1953 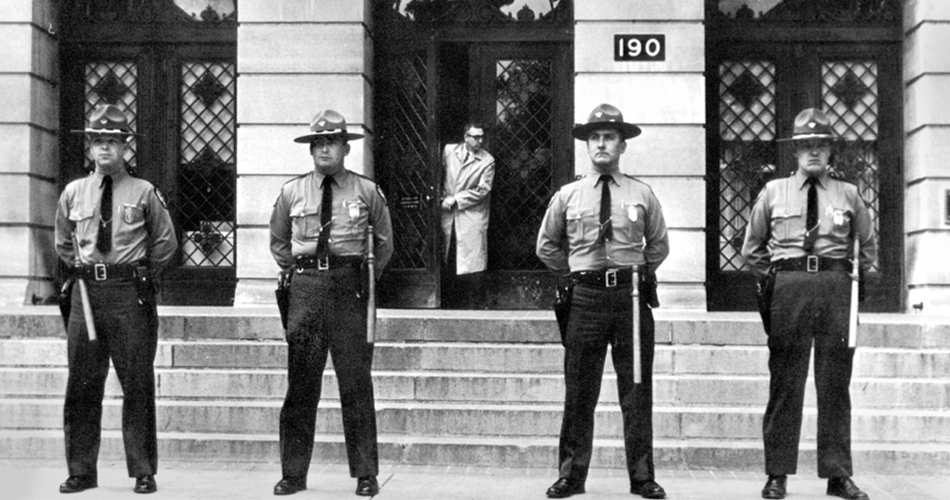 In the days that followed a student protest on April 26, 1968, Ohio Highway Patrol officers were summoned to guard the Administration Building, now Bricker Hall.

I just cannot accept the events of Friday the 26th [of April] at the university as reasonable, justified or responsible. From what I could see on television and read in the papers, it appears that this bit of anarchy was carried out by a group of trained rabble-rousers who are part of a much larger group … bent on destroying our American universities and social as well as political systems and life.

I would urge our university trustees and other officials to take adequate action to prevent a recurrence.

1946 alumnus with a bachelor’s in business

Returned herewith is the invoice for my annual contribution to The Ohio State University Development Fund for 1968. I know that my contributions are small in comparison to other generous donations, however in view of the recent civil disturbances, I feel I should not contribute even one thin dime for the support of some of these misguided students or for some fractional portion of the salary of such faculty members as Assistant Professor David E. Green [who burned his draft card during class]. When full and proper corrective and/or preventative measures have been taken, you may then again solicit my renewed financial support.

1936 graduate with a bachelor’s in social work

A long view on equality

I am a member of the [alumni] association and have a record of 26 contributions to the development fund. I am interested in student activities, and particularly, in the Black Student Union fracas.

In the first place, the fact that the black students had to form a union to fight for the redress of grievances shows a deplorable condition that should not exist anywhere. In the second place, relief by petition was ignored, as it has been for the past 50 years. There is no alternative except to forget their demands or to fight for them. In my opinion, the BSU had a right to be in rebellion.

Their acts on April 26 were insignificant to combat their injustices. But it was a step in the right direction, and that is why they are so hard fought by the whites who wish to maintain the status quo of keeping the blacks in second-class manhood. What all of these Ohio State affiliates really want, together with the city of Columbus, is a lily-white university. And that is the crux of the Ohio State matter in the open. If they get it, it should be over the bodies of the black students.I congratulate and honor the black students for their courage and sacrifice in trying to gain an equal status of manhood for all Ohio State students.