The curator of the Billy Ireland Cartoon Library & Museum at Ohio State answers your questions about the history and future of the art.

Jenny Robb and Ohio State seem destined for each other. As an undergrad studying history at Wittenberg University, she researched her honors thesis (on working-class Victorian women in cartoons) here. While in graduate school at Syracuse University, her interest in exhibitions as storytelling devices led her back to Ohio State to intern with founding curator Lucy Shelton Caswell at the Billy Ireland Cartoon Library & Museum. In 2005, Robb returned once more, this time as a visiting assistant curator. In 2011, she became the head curator. “This is the perfect place for me,” she says.

Robb curated the 2014 exhibition Exploring Calvin and Hobbes and scored a rare interview with creator Bill Watterson. She also was key in moving the Billy Ireland from the lower level of Wexner Center for the Arts to the renovated Sullivant Hall, which reopened in 2014. Organizing, cataloging and preserving the behemoth San Francisco Academy of Comic Art Collection, acquired in 1998, continues to be a focal point for the museum and library. The collection has inspired Robb’s own research and scholarly writing as an associate professor.

Up next are SÕL-CON: The Brown and Black Comix Expo and Cartoon Crossroads Columbus, a multi-venue comics, art and animation festival. The Billy Ireland will host Lynn Johnston, creator of For Better or For Worse as well as Candorville creator Darrin Bell and alternative comics publisher Annie Koyama. An exhibit of Koyama’s collection is on display in the Billy Ireland galleries through Oct. 21.

With comics reaching new audiences through fresh formats and digital platforms (and with superhero franchises providing seemingly infinite source material for Hollywood), we tapped Robb to answer your questions about all things cartoons and comics.

When a friend of mine purchased an old house in Newport News, Virginia, in 2000, I went to help him remodel. In the attic, under the flooring, the original owner had placed sheet after sheet of newspaper comic pages from the early 1920s to use as a cheap insulation. They were in perfect condition, pressed flat, and I estimate there were over 1,000. Much to my great sadness, my friend disposed of them. Would they have been of any value? — Jan Tomlinson ’68, ’78 MA

Newsprint pages have been recycled and repurposed for many uses, from lining birdcages to kindling to insulation, as your friend discovered. There is a collectors’ market for original newspaper comic strip pages from the early 20th century, although it is small and most pages have very little monetary value. It is possible they may have had research value, particularly if they contained strips published in only one newspaper. At the Billy Ireland Cartoon Library & Museum, we have an extensive collection of newspaper comic strip pages and clippings, estimated to include more than 2.5 million items. The collection was compiled by Bill Blackbeard starting in the 1970s. He formed a nonprofit called the San Francisco Academy of Comic Art in order to rescue volumes of print newspapers that libraries around the country were discarding to be replaced by microfilm. He recognized that black and white microfilm would not adequately preserve newspaper graphics, especially the color Sunday funnies. We acquired his massive collection in 1998, and it took six semi-trucks to transport all 75 tons of it to Columbus!

When and where was the first cartoon developed? — Kathy Bickel ’87, ’93 MLHR

Cartoon historians have traced the history of cartoons and comics back to cave paintings, pre-Columbian picture manuscripts, Egyptian tomb painting, Trajan’s Column, Japanese scrolls, the Bayeux Tapestry and more. Many of these include features that we associate today with cartoons or comic strips, such as graphic satire and humor, a combination of words and pictures, and sequential images that tell a story or joke. However, we can point to the date July 15, 1843, as the first time the word “cartoon” was associated with satirical drawings. On that date, Punch magazine, a popular British humor weekly founded in 1841, featured a humorous drawing by John Leech that parodied the British government’s exhibit of preliminary drawings, or cartoons, for historical frescoes that were to be painted in the new Palace of Westminster. The drawing, titled Cartoon No. 1 and captioned “Substance and Shadow,” showed poor starving citizens viewing the exhibition of “cartoons.” Prior to this, “cartoon” referred to a preliminary sketch or study for a large mural, painting or tapestry. 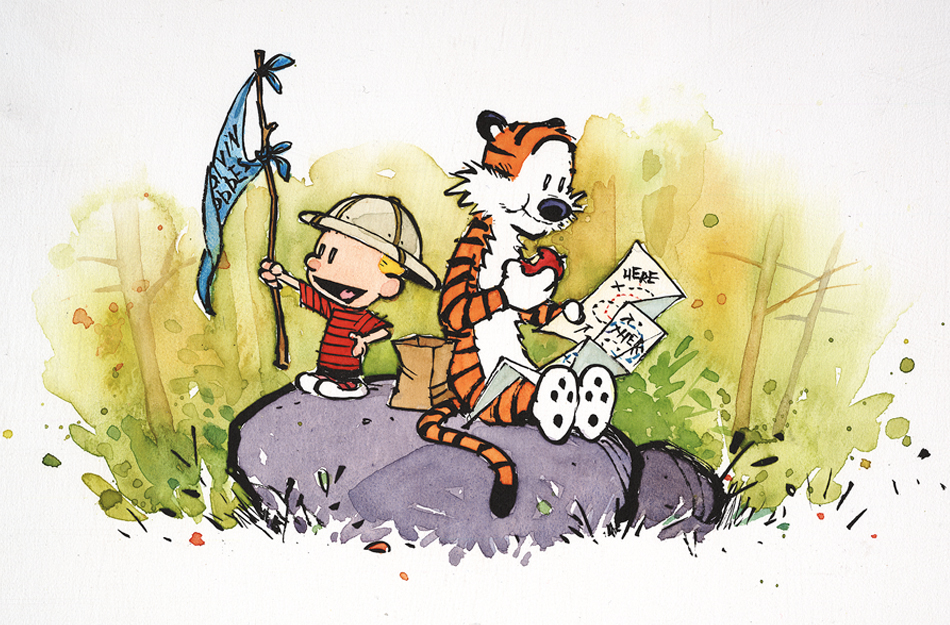 Calvin and Hobbes by Bill Watterson 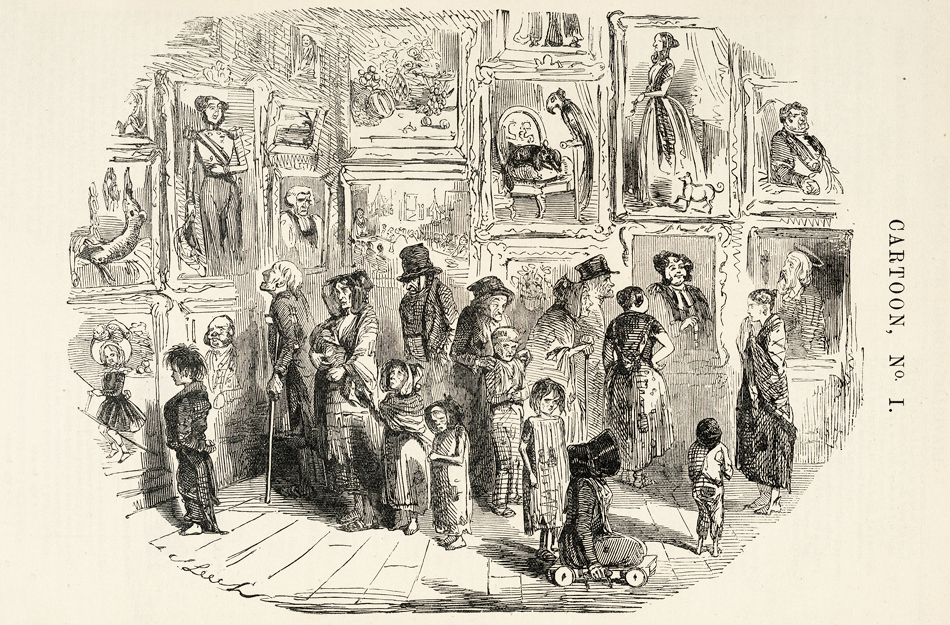 Cartoon No. 1, “Substance and Shadow” by John Leech

Do you have anything on the World War II-era character Sad Sack? — Liz Dubois ’78

Yes, we have Sad Sack original art, books, comic books and comic strips. The hapless and inept Army private, created by George Baker, first appeared in 1942 in a comic strip in the magazine Yank, the Army Weekly. Baker transitioned the character into comic books and a syndicated newspaper comic strip, as well as a radio show and a movie starring Jerry Lewis as the title character. You are welcome to visit our Lucy Shelton Caswell Reading Room to view any of the Sad Sack materials in our collection. Our collection even includes a scrapbook that a fan put together of Sad Sack cartoon clippings, which is evidence of its popularity!

What are the most popular comic series in the library? Are only American comics represented, or is Japanese manga represented as well? — Steve Bedell ’14

One of the most popular comic strips in the library is Calvin and Hobbes, created by Bill Watterson from 1985 to 1995. Our holdings include almost all of the original art for the comic strip, and some of it is currently on display in our galleries. Peanuts by Charles M. Schulz and Bone by Jeff Smith also are requested frequently. Our collection focuses on U.S. comics and cartoons, but we have large holdings of Japanese manga and European comics as well as representative samples of cartoons, comic strips and comic books from all parts of the world.

Meet the artists — or become one yourself

Meet artists, writers, filmmakers and even learn to create your own comic books this month at two events hosted in part or in whole by The Ohio State University.

The Billy Ireland and the Wexner Center for the Arts host artists, writers and filmmakers at this festival of comics, art and animation.

Meet artists and attend workshops that teach you how to be a comic-book storyteller at this kid-positive event.