At 100 years young, Anthony Violi ’42 will join the history books in September as one of few nonmembers of the Ohio State marching band to dot the i in Script Ohio.

As a lifelong musician and music educator, Anthony Violi ’42 knows the importance of practice.

And because this 100-year-old trumpet player’s next performance is such a big one, he’s been treating the white picket fence-lined backyard of his Steubenville, Ohio, home as a makeshift football field to make sure he’s crossing every t — all in preparation to dot a very special i.

While Violi became a centenarian May 4, he’ll join an even more exclusive club this fall when he dots the i in Script Ohio as part of the annual TBDBITL Alumni Reunion game. His feat will come at halftime of the Buckeyes’ Sept. 22 game against Tulane at Ohio Stadium.

Violi played trumpet in the Ohio State Marching Band from 1937 to 1942 while pursuing his bachelor’s degree in music. He joined the band just one year after it performed Script Ohio for the first time, and he’s been a mainstay of TBDBITL reunion games since the first was held in 1966, marching for almost every one.

“He’s quite the celebrity now,” says Sara Lawhon ’95, who is in her 14th year as reunion chair for the TBDBITL Alumni Club. “When we march over to the stadium, people get out of line to see him. He has a queue of people who want to get their picture taken with him.”

The reunion performance provides a sight like no other, as more than 700 current and former band members take the field as one for pregame and halftime shows. After a brief hiatus from 1968 to 1970, the band has held its reunion every year since 1971, making this year’s gathering the 50th.

Give your favorite teachers extra credit

Great teachers change our lives. Let your Ohio State mentors know how much you appreciate them with a nomination for the Alumni Award for Distinguished Teaching. The nomination period closes Oct. 10, 2018.

A centerpiece of the reunion game is the quadruple Script Ohio, which debuted at the 1977 reunion. Near the end of halftime, the combined band breaks into four blocks, with each unfurling into the iconic formation. The current band faces south toward the student section, while the alumni band completes three separate Script Ohio formations facing north, east and west.

Though sousaphone players typically are the sole i-dotters for both the student and alumni bands, exceptions are made for exceptional individuals. This year, the TBDBITL Alumni Club invited Violi to dot the i in its west-facing Script Ohio in recognition of his 100th birthday and his longtime dedication to the Ohio State Marching Band.

Violi joins a select group of other honorary i-dotters chosen by band alumni for the reunion game, including former directors Jack Evans and Paul Droste ’58 (along with their wives Carol and Anne, respectively), John and Annie Glenn, and Les Wexner ’59. For the student band, those who have dotted the i without a sousaphone in hand include Woody Hayes, Bob Hope, Jack Nicklaus and former director Jon Woods. In all, the honor has been extended to fewer than 20 individuals over Script Ohio’s 82-year history.

“I think it’s the greatest thing in the world to dot the i,” Violi says. “I feel proud that I was selected to do that.” 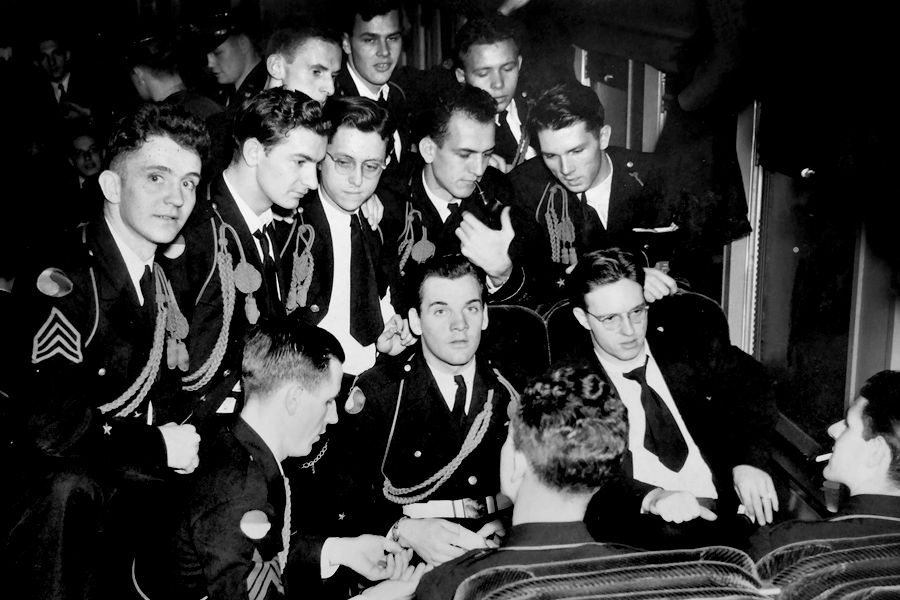 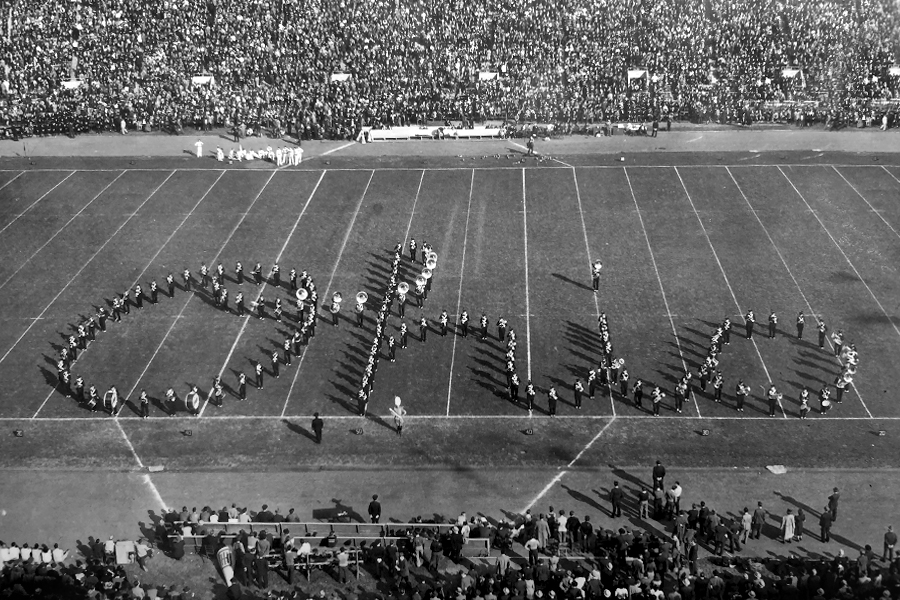 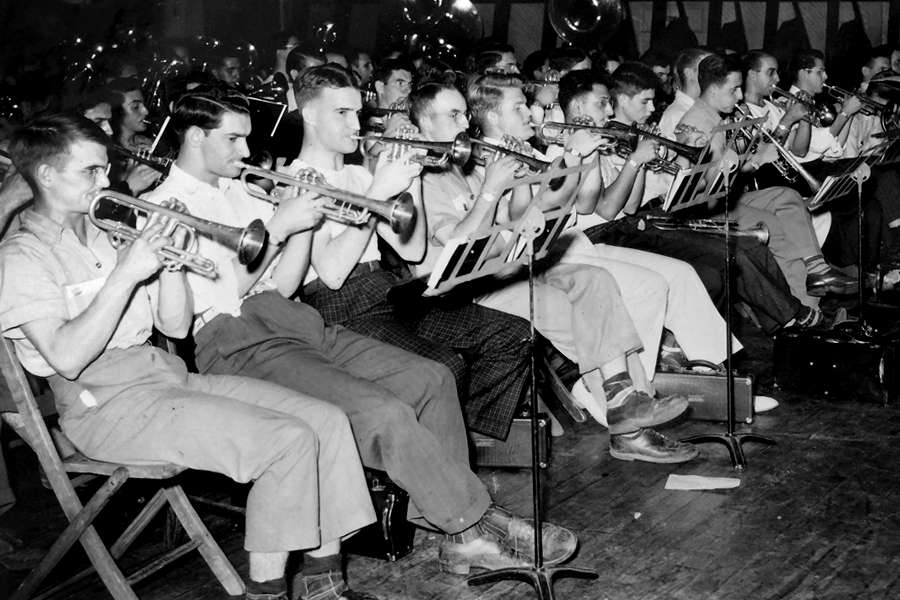 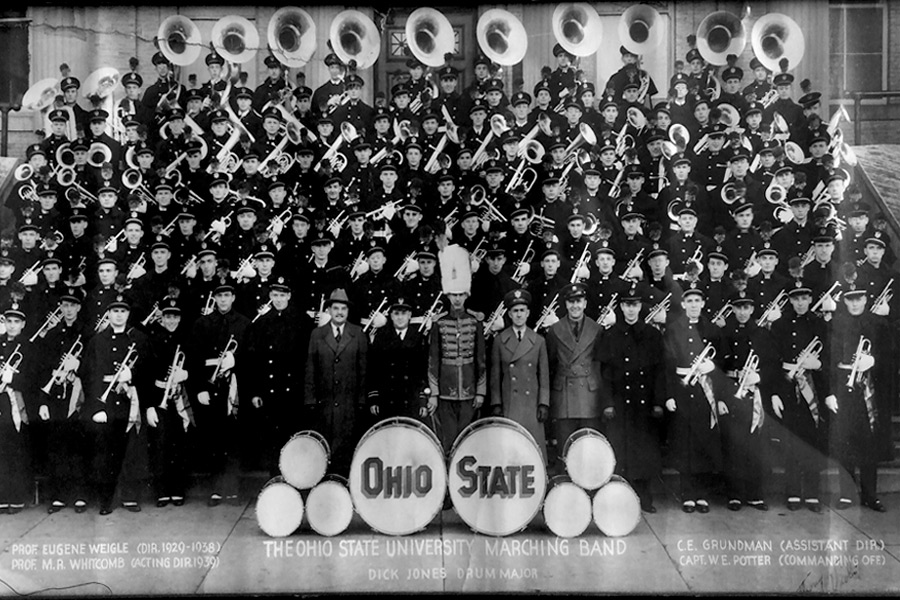 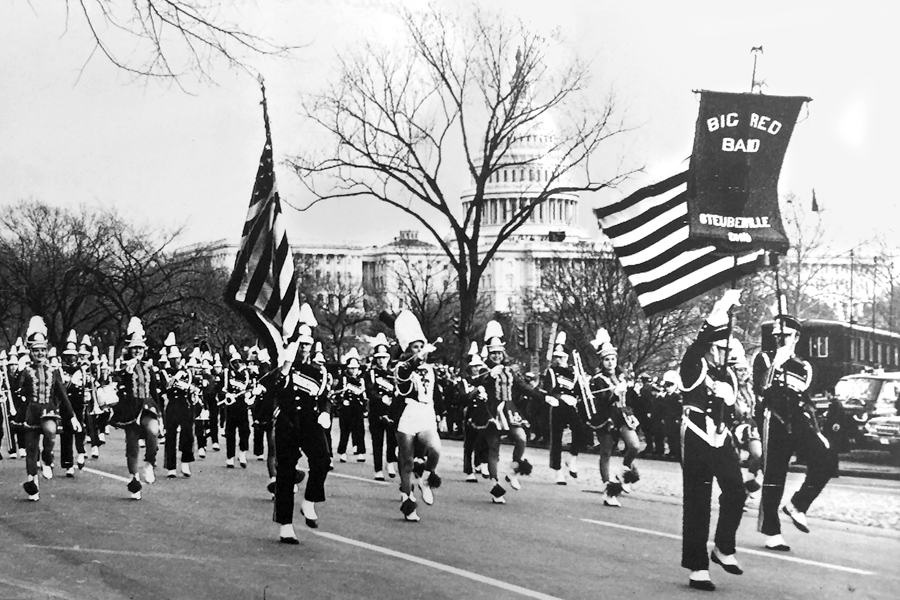 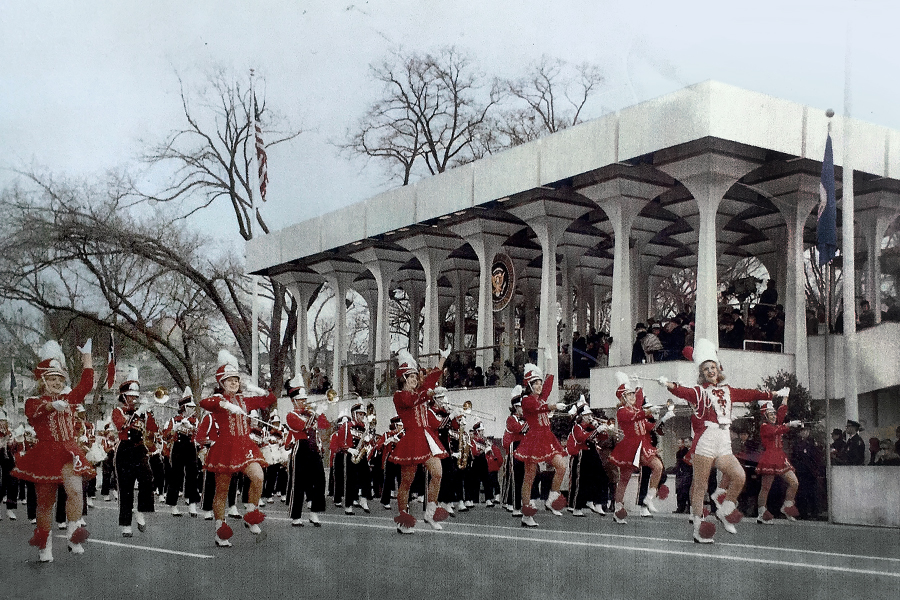 Meet Anthony Violi '42, the 100-year-old Ohio State marching band alum who will have the honor of dotting the i in Script Ohio at the Sept. 22 game against Tulane.

Originally from Adena, Ohio, Violi earned his Ohio State music degree in June 1942, just months after the United States had entered World War II. By July, he was in Texas for basic training. After serving in Europe in the Army’s 95th Infantry Division, he returned to his home state to begin his career as a music teacher.

Violi spent a long stretch at Steubenville High School and proudly recounts how he directed the school’s marching band in the precise style of Ohio State’s, leading to its selection for parades marking the inaugurations of John F. Kennedy and Lyndon B. Johnson.

At 100, he’s still immersed in his lifelong loves of music and teaching. He plays in a community band and helps teach members of a local elementary school band. Over his career, he has taught thousands of students, and he still keeps in touch with many.

While he’s had countless exhilarating moments in a century of living, and is eagerly anticipating another on Ohio Stadium turf, he says nothing can beat the satisfaction that comes from influencing a young person’s life.

Pride is the watchword for Violi’s fans, too, from children, grandchildren and great-grandchildren to a busload of friends and supporters who plan to travel together from Steubenville for their favorite trumpet player’s big day. His cheering section will no doubt grow to 100,000-plus when Violi peels off from his Script Ohio’s second O.

On Sept. 22, the current and alumni bands will join together for the 50th time, with performers ranging in age from 18 to 100. Among the hundreds of TBDBITL alumni will be seven with perfect attendance records. 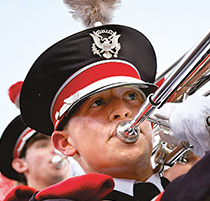 There are only two places to be this Thanksgiving morning: at an iconic parade or in front of your television.