Dillon Welch, left, plays a game with youngsters at Pathways, where a majority of families served live at or below poverty levels.

Ohio State students and alumni have made the Buck-I-SERV alternative break program a gift to communities in need and an example for others to follow. Journey to Florida with a recent contingent of students to see how these efforts brought joy to their young charges.

Kayleigh Benson and Cal Wible ’49, ’50 MBA are huddled in a booth at a south Florida restaurant, discussing a topic each views as a life purpose: helping others.

Benson, a senior social work major at Ohio State, has made a long mid-December bus ride from Columbus with Buck-I-SERV, an Office of Student Life alternative break program that engages students in community service. Wible is the guy who has poured his heart into the program.

Now, at a dinner the Alumni Club of Naples is hosting for the Buck-I-SERV students, Benson wants to know why. Astute and energetic at 90 years old, Wible has a simple answer: “I’ve had a good ride, so I’ve gotta pay my dues.”

It’s a mantra that has guided him through a life of service at home and abroad — from student organizations at Ohio State to community involvement in northeast Ohio through an active retirement in Naples. And when there’s an opportunity to encourage others to follow suit, Wible welcomes it. 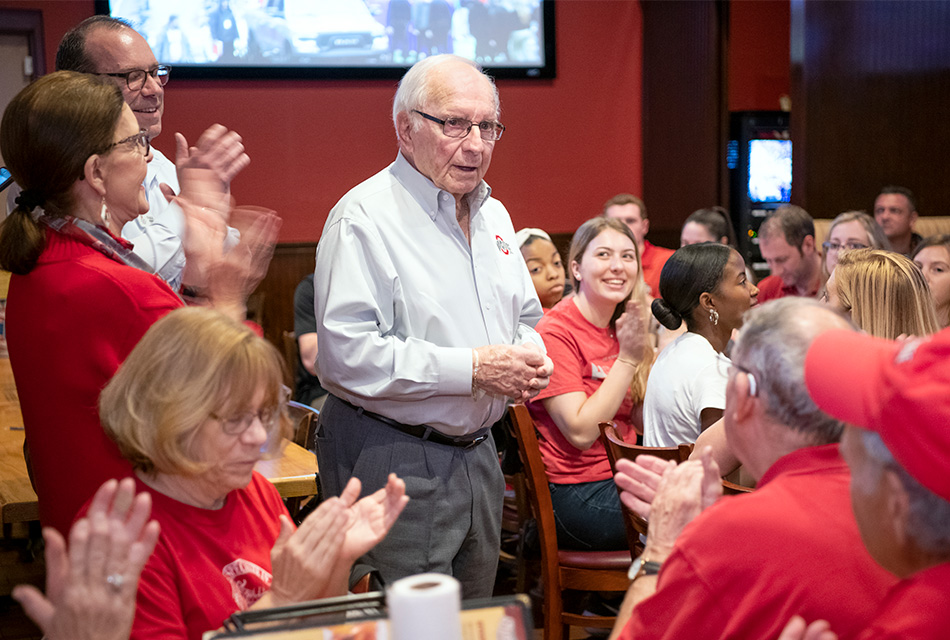 Cal Wible, an early and devoted supporter of the Buck-I-SERV alternative break program at Ohio State, addresses a group of students in Florida. 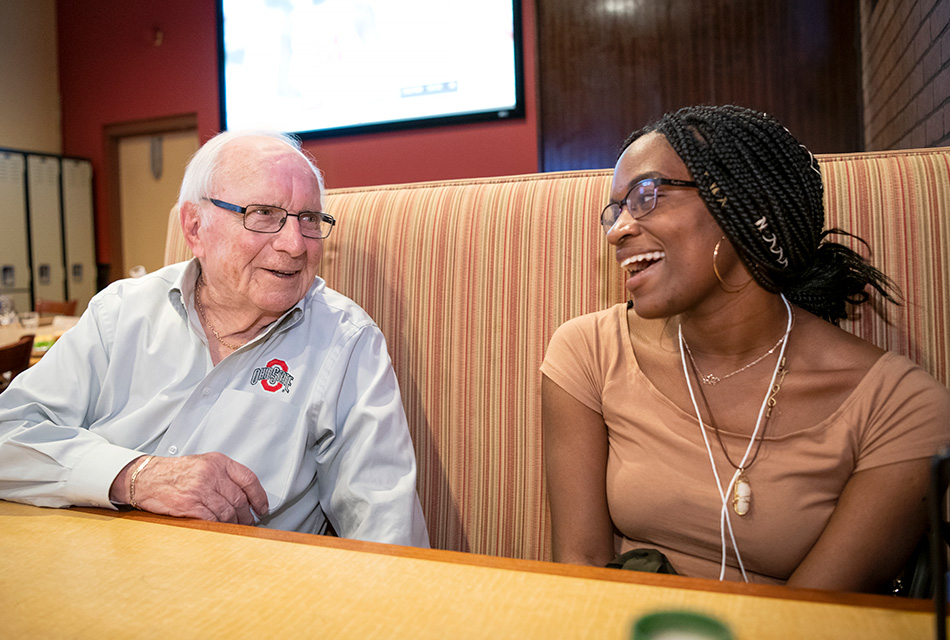 Cal Wible, left, and Kayleigh Benson compare notes about their connections to Buck-I-SERV.

In 2008, an Ohio State representative asked him if he would be interested in providing support for an area to assist students in the new Ohio Union.

“That wasn’t quite a fit for me, but she mentioned students were on an alternative break trip with Habitat for Humanity,” Wible says. At the time, he was in the midst of a 20-year stint as a volunteer with the nonprofit homebuilding group in Collier County, Florida. “Right there, she had me.

“I told them we needed to change the name, though. Alternative Spring Break Program was just too long for any kind of sale.” And, you see, Wible knows how to make a sale: He owned a successful Pontiac dealership in Medina, Ohio, for years.

After a student contest he initiated failed to deliver a name that stuck, Wible proposed Buck-I-SERV, adapted from an event name he admired.

What started as a single trip of about 35 students to New York City in 2003 had reached 250 participants by 2008. Now, an average of 1,200 students make about 90 trips to almost 20 states and five countries in a single year. More than 10,000 students have participated since the program’s inception.

“That’s a lot of people,” Benson says. “The program is working.”

‘Broad experiences to do great things’

Buck-I-SERV volunteers began visiting in spring 2009, making it one of the program’s longest-standing destinations. Students come three times each year. On recent trips, they’ve helped at the Pathways Early Education Center, where they play with the children and assist the staff with daily tasks. On the December trip, students helped prepare for Christmas activities at the school.

Welch is navigating the streets with the help of Pathways teacher Cynthia Rodriguez. “It only takes about 15 minutes to drive through town,” she says. People generally walk or ride bikes, because few own cars.

Rodriguez, the daughter of Mexican immigrants, is a recent graduate of Florida Gulf Coast University. Education has been the key to a better life for her family, she says.

“I didn’t have a typical childhood. We were always in the fields. School was my free time.”

There’s no mall or shopping center in town. Blue tarps protect the roofs of many houses the van passes, a reminder of the path of destruction and flooding that Hurricane Irma wrought in 2017.

It’s an eye-opening tour for the Buck-I-SERV students, who have spent the week at Pathways surrounded by the joyful children of families that occupy these homes.

“These kids are happy, they’re clean, they’re ready to go,” says Kareem Muakkassa, a freshman neuroscience major from Akron. “And Cynthia tells us there are three families living in a trailer.”

“We’re coming here, doing this service, and that’s great. But we go home. This is their life,” says freshman Lauren Dietz of Dayton, who also majors in neuroscience. “That’s why I’m so passionate about education: It’s the pathway to anything in the world.

“This education center is so important to these kids,” she adds. “You can tell their parents care. They’re setting them on the right path.”

Dietz and the other Buck-I-SERV participants chose this trip because it addresses issues they care about: education, poverty, inequality and hunger.

“For three weeks a year, Pathways has a lot of hands-on help, and that’s a great benefit,” says Susan Ignelzi ’74, ’80 PhD, who serves on the boards of both Pathways and the Alumni Club of Naples. “This gives Ohio State students broad experiences to do great things to help people.

“We hope they leave having a broader understanding of this community and what it does for all of us every day.” 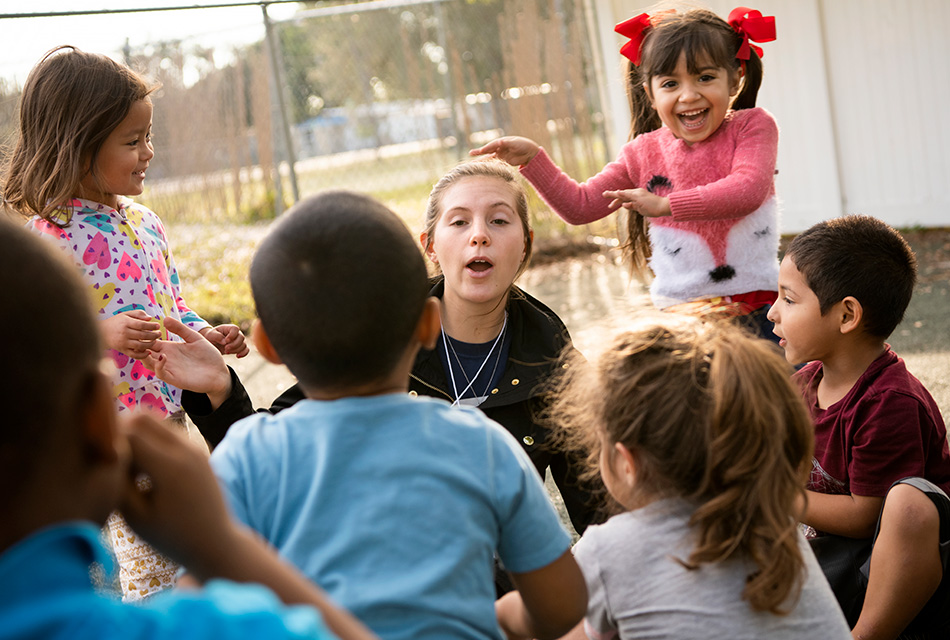 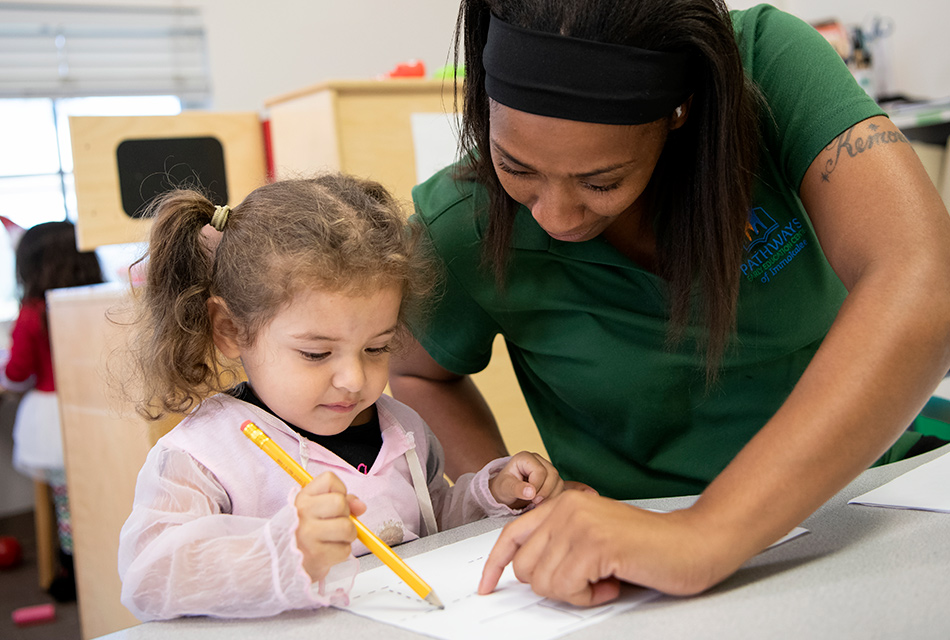 A preschool student at Pathways practices writing with an instructor at the education center. 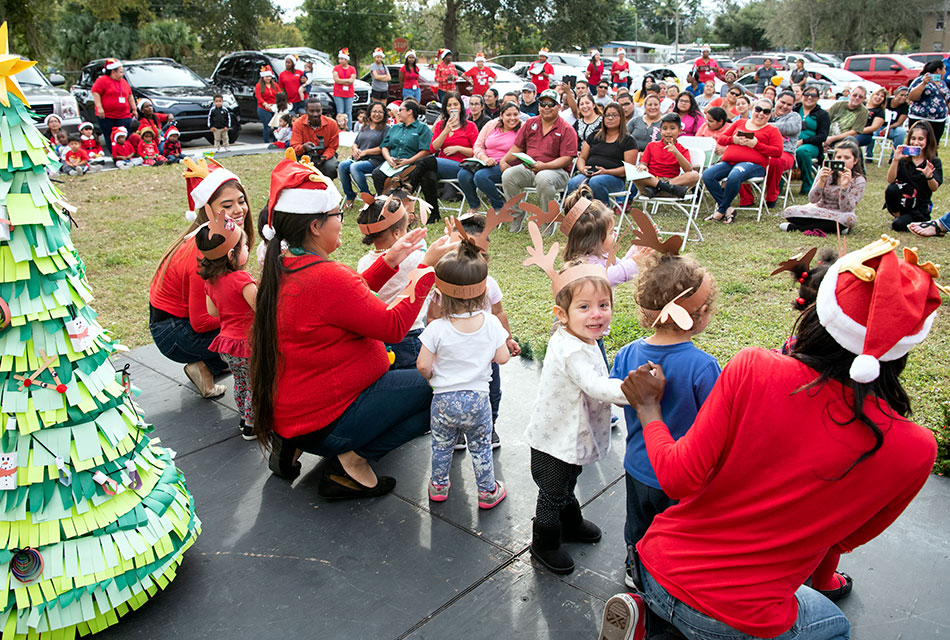 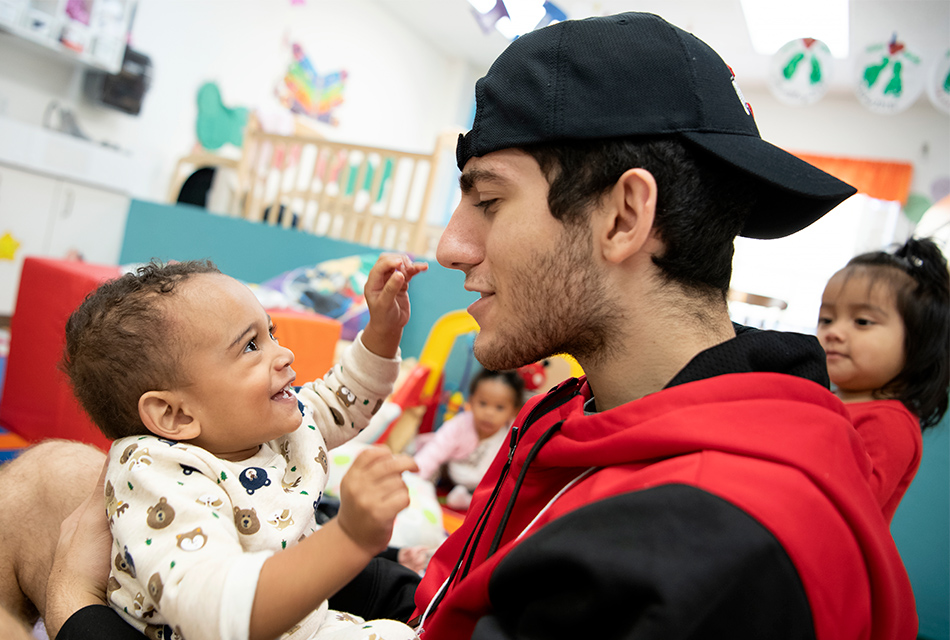 Kareem Muakkassa gets a smile from 1-year-old Nova at Pathways, which Buck-I-SERV assists three times a year.
Previous Next

‘I hope it continues to catch on’

Welch maneuvers more than just the van for Buck-I-SERV. He and his twin brother, Dillon, were team leaders for the trip, and they’ve been on a pair of other Buck-I-SERV ventures in other states.

“Any trip you go on, it’s going to be a great experience,” says Dillon Welch, who like his brother is a junior biology major considering medical school. “Service like this is going to be a lifestyle for us now because you see the direct impact you have on a community.”

Ohio State is not alone in offering alternative break service trips, but in 2013–14, Buck-I-SERV became the first program to exceed 1,000 participants in a single year, according to Break Away, which promotes the development of such efforts. Wible believes Buck-I-SERV has raised the bar, inspiring organizers at other schools to strive higher.

“When I first got involved, my vision was only ‘What can we do to get Ohio State students to help those who need it?’ But I had tunnel vision,” he says. “We are motivating other universities to be more active, which should motivate us to be more active.”

Kierra Edwards ’18, a graduate student in early childhood education and a team advisor in Immokalee, was working in the Buck-I-SERV office in 2018 when members of another alternative break program visited to seek advice about expanding their efforts.

“I hope it continues to catch on and more schools in more states get involved,” Edwards says. “It could really be monumental.”

In the end, Wible’s grand vision boils down to an individual’s desire to help wherever that help is needed. “How can you ever measure what we’ve done?” he says. “I’ll never live to see how big it can get, but the potential is large.”

Of course, it will be up to future generations to carry Buck-I-SERV forward, inspired by Wible’s example.

“When we left the restaurant after the alumni dinner, he said, ‘It’s a good life,’” Benson says. “That stuck with me. I’ve been thinking about all the things I’ve done and still get to do to help other people and have that fullness in my heart. I’m looking forward to living that good life he talks about.” 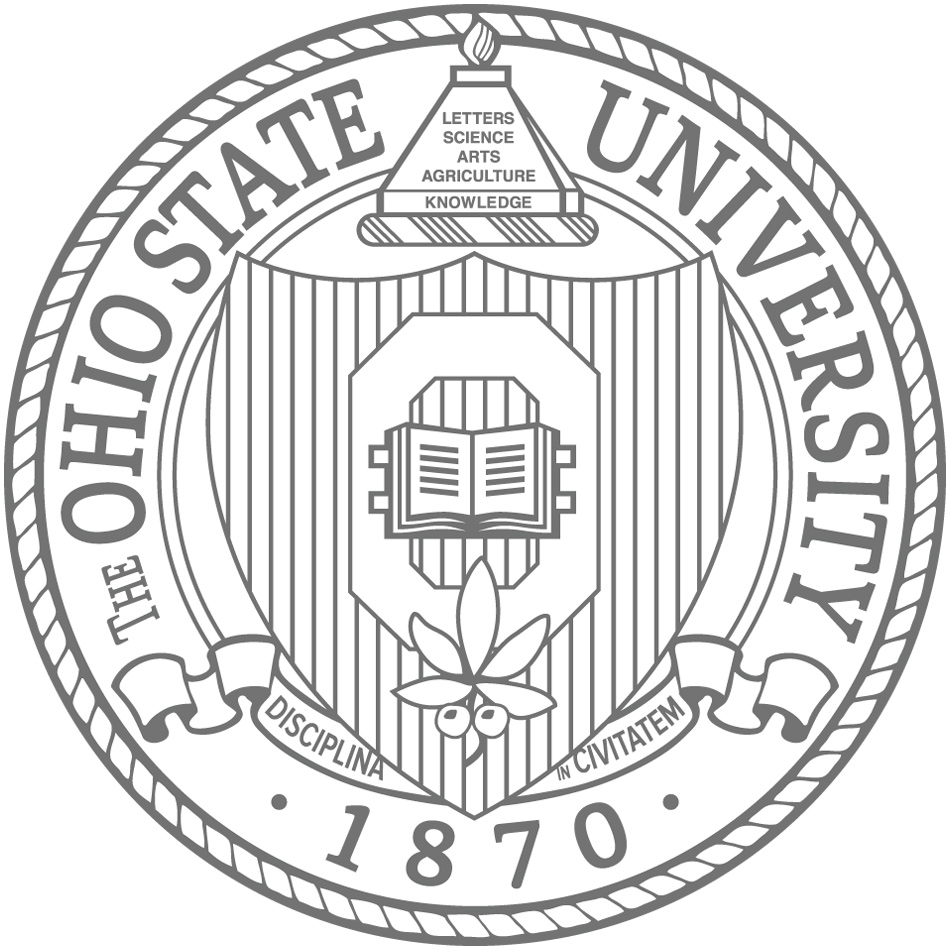 A motto for the ages

A proposed coat of arms for Ohio State was on the agenda for the Board of Trustees on November 5, 1938. The design by engineering professor Thomas French incorporated elements of the university’s original seal — including a flame atop a pyramid containing the words “letters,” “science,” “arts,” “agriculture” and “knowledge”— and a new motto: “Disciplina in civitatem.”

The trustees approved the design and thanked French for his “splendid contribution.”

A few months later, in a letter to French reprinted in The Lantern, Rightmire wrote that “no motto could be more happily adopted by an institution of learning drawing its support from the state.”

The former president acknowledged that the university could do better in providing an education to produce citizens “with a certain consciousness and appreciation” for the public good.

With the country just beginning to emerge from the Great Depression, Rightmire was blunt in pointing out how a “gullible” citizenry had failed to “read the signs of the times, portending economic and social disaster.”

He called for the university to set up a plan to educate students on “the nature of our government and the responsibilities thereunder of each citizen for its main­tenance, improvement and realization in the affairs of everyday life.” Such a curriculum, he believed, was “by all the signs of our times an imperative necessity.”

“Democratic government is in the balance,” Rightmire wrote. “The motto is a clarion call to a lapsed responsibility!”

Today, civic engagement is a core principle in academic centers such as the John Glenn College of Public Affairs and in curricular and community service activities across the university. It seems Rightmire would be pleased that “education for citizenship” continues to define Buckeyes around the globe.
— Lynne M. Bonenberger ’87 MA

Share via Email
You Also Might Like
View All
A PACT for the future
Learn about a unique partnership that combines the strength of Ohio State, Columbus and the local housing authority to renew the historic Near East Side.
Link to A PACT for the future