Where I live: Columbus

We found our places off campus as well as on, often dining and dancing ’til the wee hours. Here, alumni who still live in Columbus (or visit often) share what they love in today’s capital city.

Before things were wicked or righteous, before bad was good, back in the days of groovy, Don Swales ’56 decided to open a bar. While there was plenty of competition for Buckeyes’ attention on High Street, Swales had a plan — and a different place in mind.

He was three years out of college and disappointed by the jobs he had tried. “I saw the empty space at the corner of Lane and Tuttle Park and decided that might be a good spot for a bar,” Swales says. Thus, the Varsity Club was born. “We were very lucky when we opened because right across the street were Jerry Lucas and Bobby Knight, and the championship basketball team was in full blast. We opened and had a built-in audience right off the bat.”

That was 60 years ago. Generations of students have come and gone, as have most of the watering holes known for buckets of beer and sticky carpet, leaving the Varsity Club as the oldest continuously open bar in the university district. “In other words,” Swales says, “their grandparents went there and their parents. And now they’re going.”

Because the Varsity Club did not have a permit to serve beer with a lower alcohol content (known as 3.2 and legal for anyone 18 or older to purchase in Ohio until 1987), it “became a hit with graduate students and faculty and people who were tired of the dive bar scene,” Swales says.

By 1965, Swales was able to hire a manager and take a step back. He moved to Aspen with his family. Nine years later, he sold the bar to Joe Mollica and Jim Ryan, who have owned it ever since.

“That’s where we go now. So if it’s a home basketball game we’re checking out, we always go to the VC,” says Tom Reeves ’93, ’05 MA, director of energy management and sustainability in the Office of Student Life. “If it’s a post-work hangout we want near campus, it’s always the VC.” 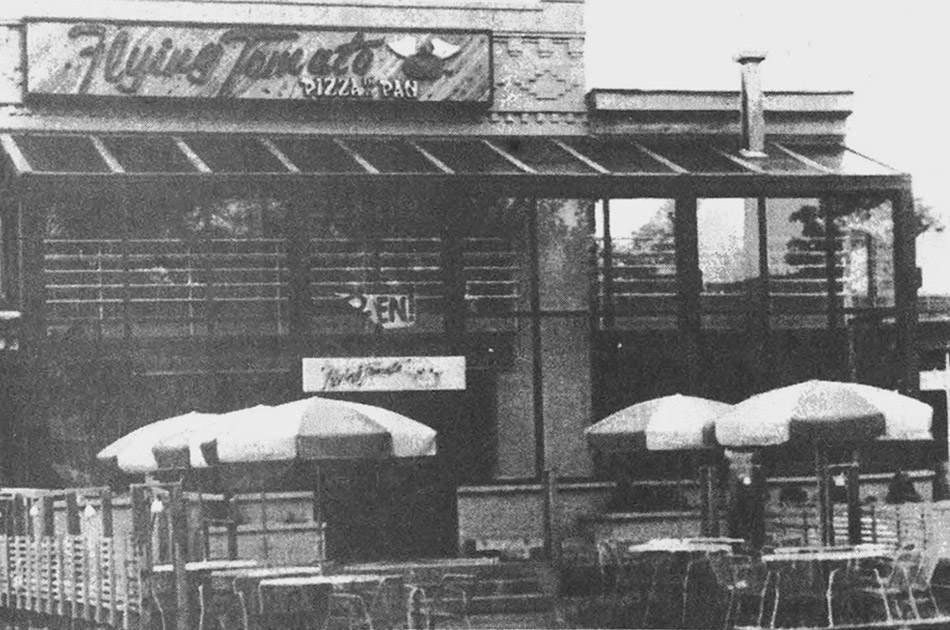 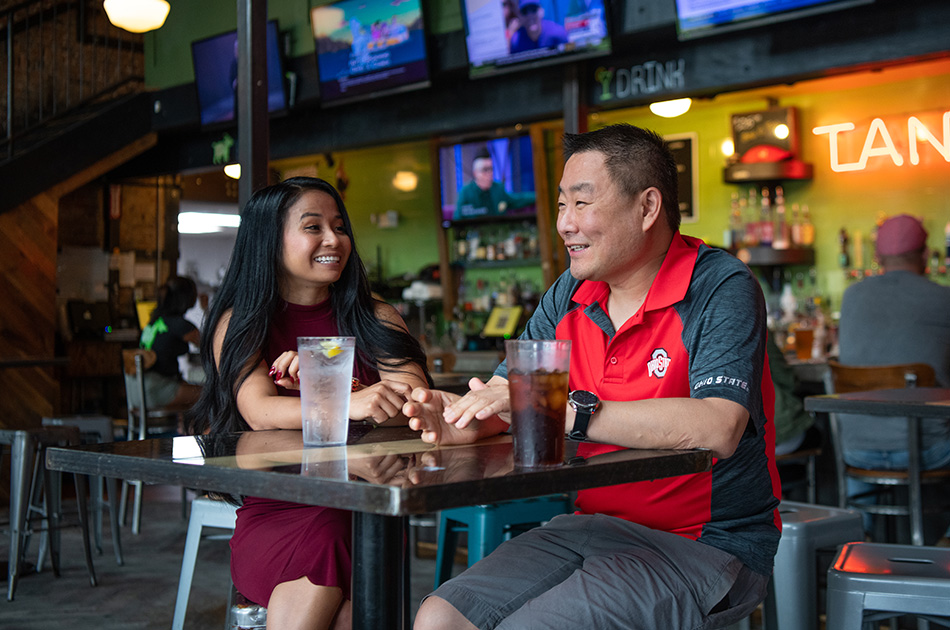 Of course, High Street still has its allure. Sam Shim ’94, ’97 MBA has fond memories of places up and down the street, from Flying Tomato to Bernie’s Bagels. These days, Shim, president of the Asian and Pacific Islander Alumni Society, observes that there are “more quality restaurant choices” in the neighborhood, including Ethyl & Tank at High and 13th Avenue, which Sam McBride ’17 appreciates for its patio.

And while they may have gone for the beer, many patrons stayed for the dancing.

Joan Mastell ’74, ’79 MA liked to feel the funk at the Agora. “They would have bands, and we would go there and drink beer by the pitcher and dance.” When they wanted a change of pace, the nearby Castle was an option. 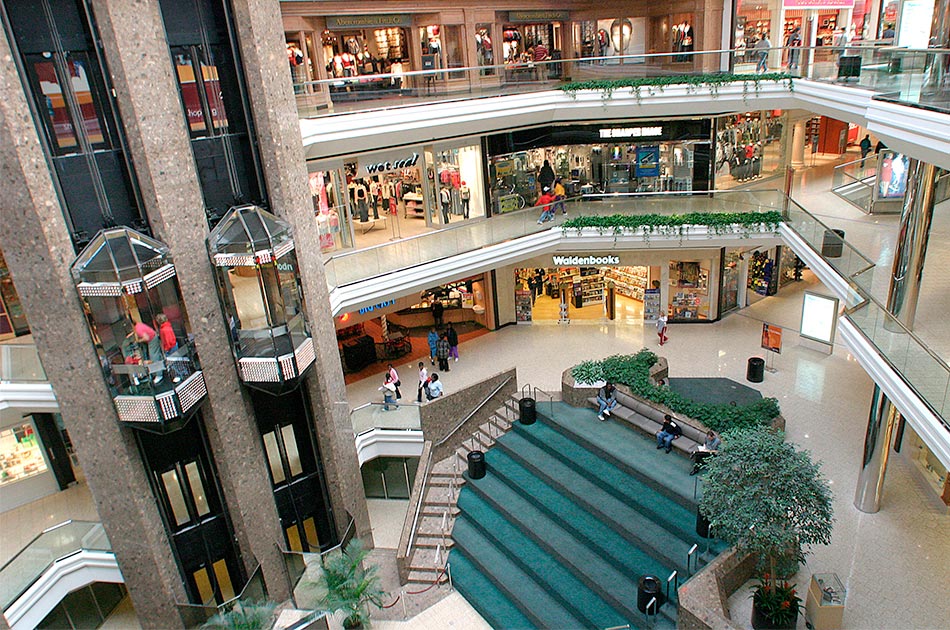 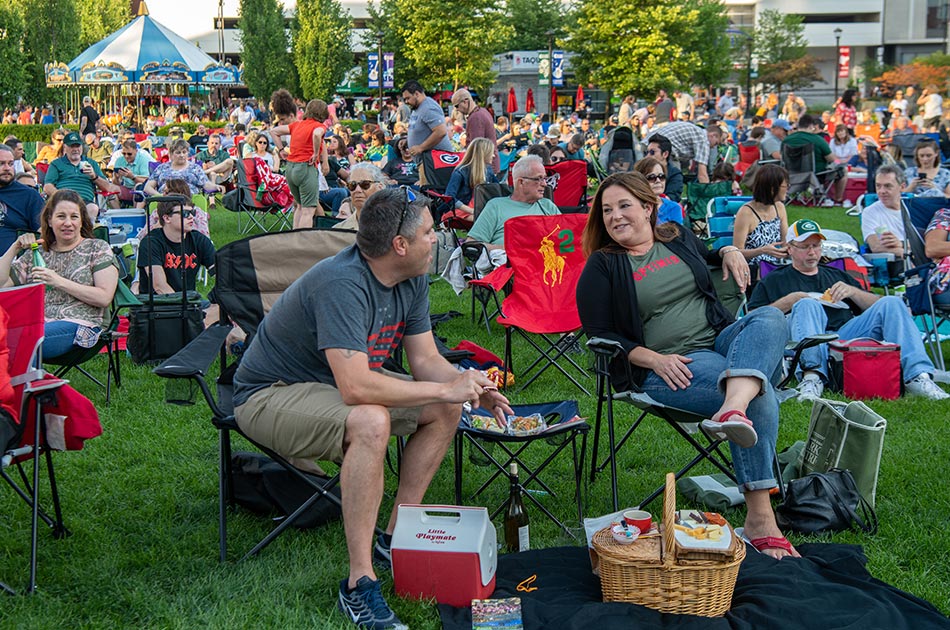 Pam Bergen ’82 remembers seeing Little Feat and punk bands at the Agora, but her more frequent stop was Zacharia’s Red Eye Saloon “because they always had McGuffey Lane playing there. Country rock was popular back then.”

By the time Kristi Scott ’03 saw Method Man & Redman there, the Agora had become Newport Music Hall, but the scene was much the same. “There were parties there I would go to every now and then with friends,” Scott says. “I actually really liked that because it was walking distance from north campus.”

So where to now?

As alumni, Columbus-area Buckeyes venture a little farther afield for their music fixes. On Sunday evenings, David Penniman ’75 PhD pulls up a chair at Dick’s Den, a jazz bar north of campus, to hear his son-in-law play. Chris Arps Lugo ’94, ’99 MA heads downtown. “A couple of years ago, Boy George played the Palace, and it was a fantastic show. The entire audience was up dancing.”

Just this spring, Molly Ranz Calhoun ’86 saw The Four Tops and The Temptations there. An avid concert-goer, Calhoun also lets the beat carry her to Express Live, Schottenstein Center, Nationwide Arena and even Ohio Stadium. And proving you can go home again, “we also recently went to the Newport, to see a friend’s son play in a band,” says Calhoun, interim senior vice president of student life at Ohio State.

Until ride sharing became a thing, students shared the sidewalk. But once a quarter, Stacey Renker ’99 indulged in a ride on the No. 2 COTA bus. 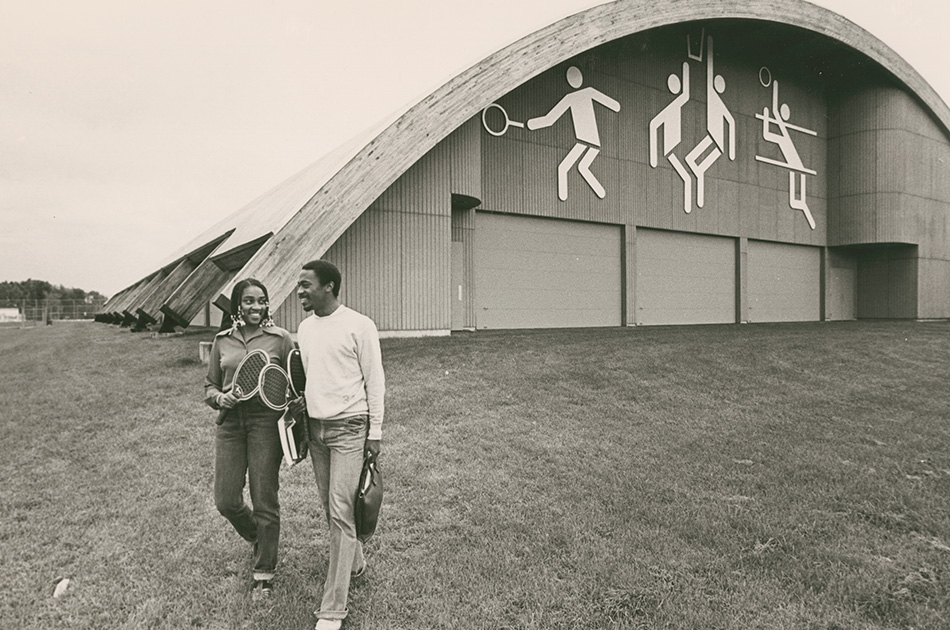 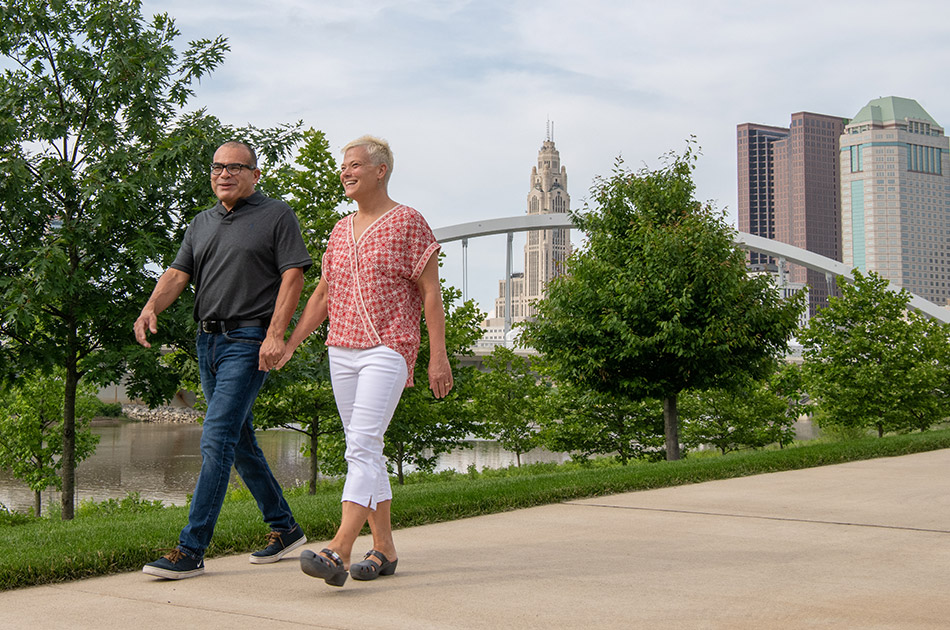 “We would go down to the Max & Erma’s at the City Center Mall, which is obviously not there anymore. That’s what we would do as a special treat. That was our big expedition.” (The City Center scene has been replaced by John F. Wolfe Columbus Commons, which hosts concerts, family movie nights, weekly food truck courts and other events.)

These days, a bus trip along High Street could take you to a wide variety of dining establishments that Buckeyes enjoy. Phil Giessler ’68 stops by Northstar Café for both food and atmosphere. The Short North restaurant is one of five Northstar locations in central Ohio that focus on locally produced, sustainably grown foods. When Penniman is in the mood for vegetarian fare, he chooses Little Eater, located on High Street in Clintonville and at the North Market.

Renker and other like-minded diners can take heart, though. Max & Erma’s still has six Columbus-area restaurants and others across local borders. But none has the midnight breakfast buffet Lenny Kolada ’76 recalls the original German Village Max & Erma’s offering: “Scrambled eggs, bacon, home fries and an unlimited supply of champagne. I remember that fondly.”

Get out and about

The first seven dates Chris Lugo had with now-husband Manuel Lugo ’90, ’92 MS, ’99 MD were at Mean Mr. Mustard’s bar, but they owe their meeting to the old Larkins Hall. She was a physical education major; he was pursuing a master’s in exercise physiology.

“Outside of classes, we would still hang out there,” Chris says. “We would take a fitness class or play squash.” These days, the Columbus alums still enjoy a physically active social life that includes hiking on area trails, such as those at more than 20 Columbus and Franklin County Metro Parks. 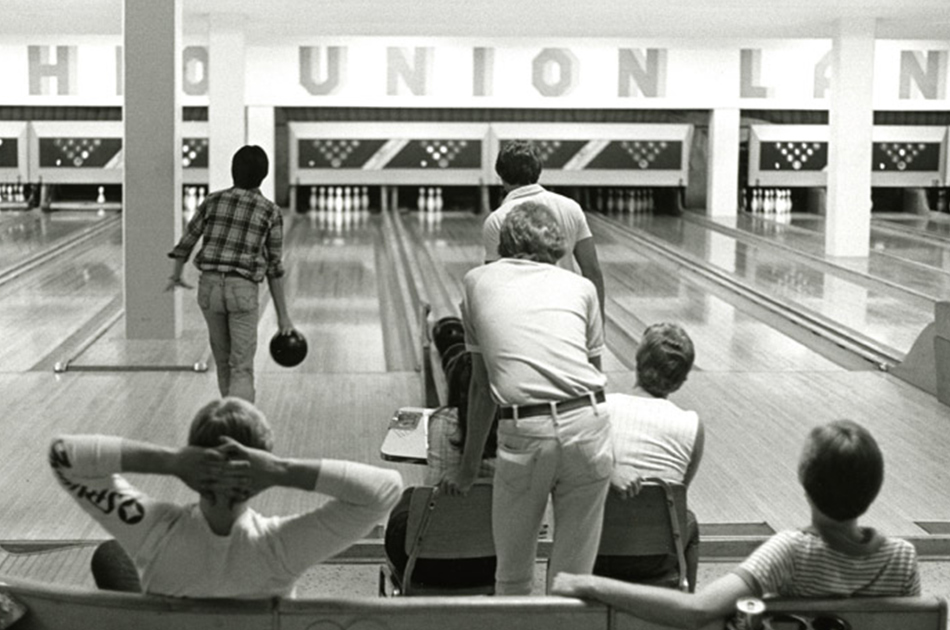 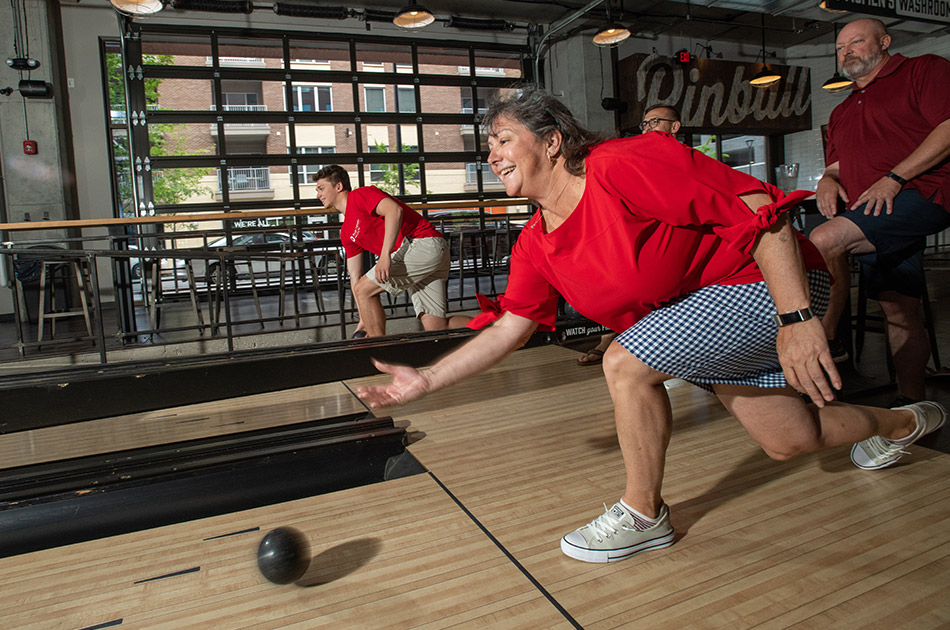 For McBride and Bergen, outdoor pursuits have a decidedly botanical theme. As students more than 30 years apart, both enjoyed walks around the Columbus Park of Roses. Besides that Clintonville locale, McBride now includes Franklin Park Conservatory and the downtown Topiary Park on his list of go-to recreation and relaxation sites. The Scioto Audubon Metro Park is a favorite of Bergen’s.

As students in pursuit of recreation, others took to the lanes. “The old Ohio Union used to have a bowling alley in the basement,” Reeves recalls. “The bowling machines were hard to maintain, but I remember Friday nights we used to go to the bowling alley, me and a couple people from my stadium dorm floor.” Calhoun, another Ohio Union bowler, now enjoys sending the pins flying at Pins Mechanical, where she’s sometimes joined by her three kids, two of whom are Ohio State students.

Rekindle Buckeye friendships and make new ones by exploring an alumni club or society.