Dr. Sophia Tolliver ’03, ’04, ’08 MPH, ’15 MD visits with her patients Arma and Leroy Anderson during Healthy Community Day on the Near East Side of Columbus.

A PACT for the future

The Near East Side of Columbus is home to 8,000 residents, two Ohio State medical facilities and a unique partnership involving the university, the city and the local housing authority that is bringing renewed vibrancy to this historic neighborhood.

Earl Milton sees the sense of community growing on Columbus’ Near East Side, where his home of 17 years sits midway between two bustling neighbors.

His neighborhood has seen many seasons. Affluent citizens built homes here in the late 1800s with the advent of street car lines east of downtown. In the 1920s and ’30s, it boasted a rich cultural corridor and saw greater economic and racial diversity than other areas of the city. African Americans made up an increasing share of residents in the decades that followed, and segregation led them to rely on businesses and services close to home. In time, diminishing job prospects, urban flight and an interstate path that isolated the area took a toll in the form of declining population and shuttered storefronts.

Yet Milton and others who know this neighborhood well are seeing vitality return through the work of PACT, or Partners Achieving Community Transformation, and the enthusiasm and commitment of community members. Launched in 2010, PACT is led by Ohio State, which is working in partnership with the City of Columbus and the Columbus Metropolitan Housing Authority to spur revitalization in this 800-acre area that is home to some 8,000 residents. Milton’s home sits between The Ohio State University Wexner Medical Center’s East Hospital and Outpatient Care East.

PACT’s projects are wide-ranging, from replacing one of the country’s first public housing projects — Poindexter Village, circa 1940 — with bright, modern townhomes to inspiring students from elementary through high school to consider medical careers, which they explore through ongoing relationships with Ohio State doctors, nurses and technicians.

One aspect of the initiative encourages university employees to purchase homes in the neighborhood, while another helps existing homeowners complete exterior home improvements. Milton benefited from the latter program, which led to new siding, windows and porch railings as well as repairs to his pale yellow duplex with a handmade Ohio State bench in the yard. Through June, PACT had invested $320,000 in improvements to 25 homes since the efforts started in 2017.

“Everybody in the neighborhood has stopped by,” Milton says. “It’s been a community meeting — all I was missing was cookies! It makes you feel better when you go down the street and the houses look nice and presentable. It gets inviting. We have more people moving into our community. It’s diverse, just the way it’s supposed to be.” 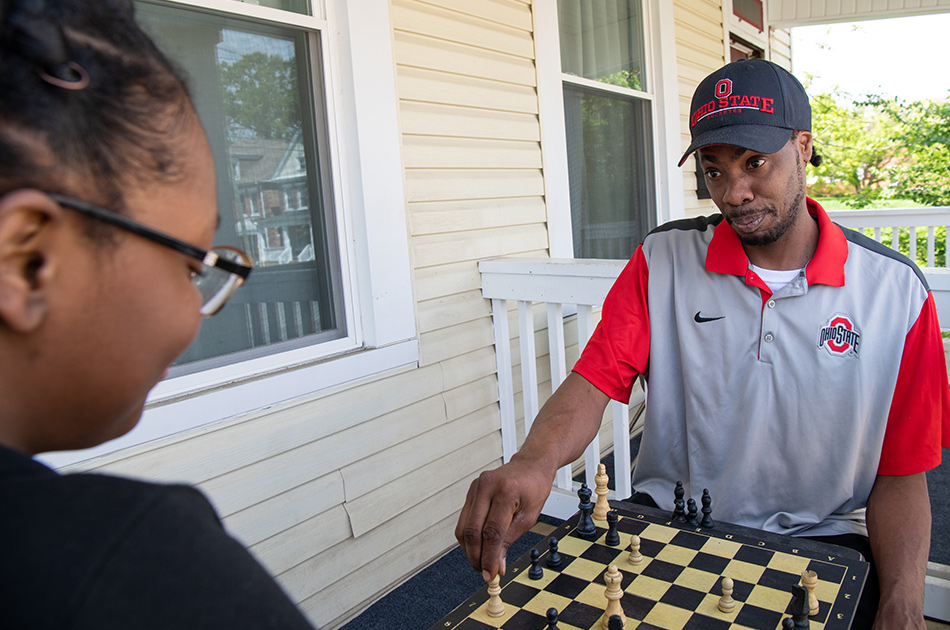 East High School student Eshanti Milton and her dad, Earl, enjoy a game of chess on their updated front porch. 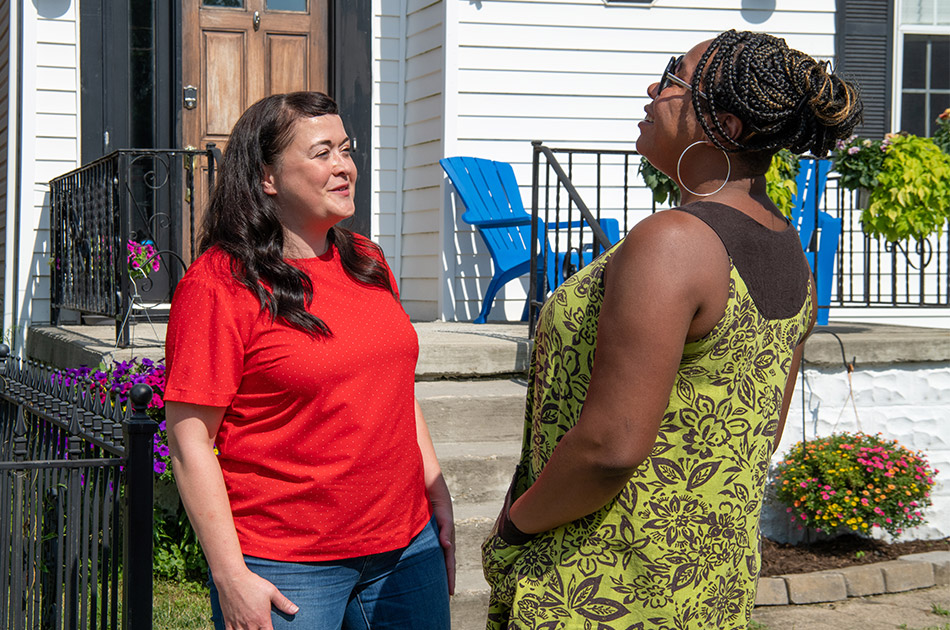 Neighbors Erin Prosser ’04 MCRP, left, and April Sunami ’02 chat in their neighborhood on the Near East Side.

That’s also the case several blocks west near the home of Erin Prosser ’04 MCRP. She works for the university’s Planning, Architecture and Real Estate Office, and she and her boyfriend purchased their home in 2018 through the incentive program for Ohio State faculty and staff.

“Our street has been fantastic. We have a wide range of neighbors — families with small kids, which makes it fun; a neighbor next door who is an older woman; a family down the street that seems to keep an eye on everything. Everybody is extremely friendly and helpful. I came out one morning last winter and one of the neighbors had taken it upon himself to brush the snow off everyone’s car up and down the street.”

Prosser appreciates being close to downtown amenities such as the art museum and restaurants, but more than that, she welcomes the opportunity to be part of an eclectic neighborhood on the rise. The homeownership incentive program began in 2017 as well, and through June, the university had provided $144,000 in assistance to leverage 18 home purchases exceeding $2.5 million.

“It is a really special thing for the university to be encouraging faculty and staff to live in and around the university’s resources and be part of that fabric,” Prosser says. “I think it’s really amazing and important that the university takes it that seriously and wants to make that connection with communities on a neighbor-by-neighbor level.”

Autumn Glover ’07, ’11 MCRP, ’12 MA shepherds government and community relationships for East Hospital and has been instrumental in PACT from blueprint through present day. She can expound on any aspect of the partnership, but her pride is most evident when she describes the medical center’s presence here.

East Hospital stands tall in the neighborhood, both in stature (at 16 floors) and regard. It marked its 20th anniversary in April, and in 2020 will complete a $26 million expansion and renovation providing new operating rooms, pre- and post-op spaces, imaging and patient reception areas.

“There is this kind of community connection that’s genuine and authentic,” Glover says. “People actually come to the East Hospital cafeteria like it’s a restaurant. We have people who come every morning for breakfast and bring their paper.” 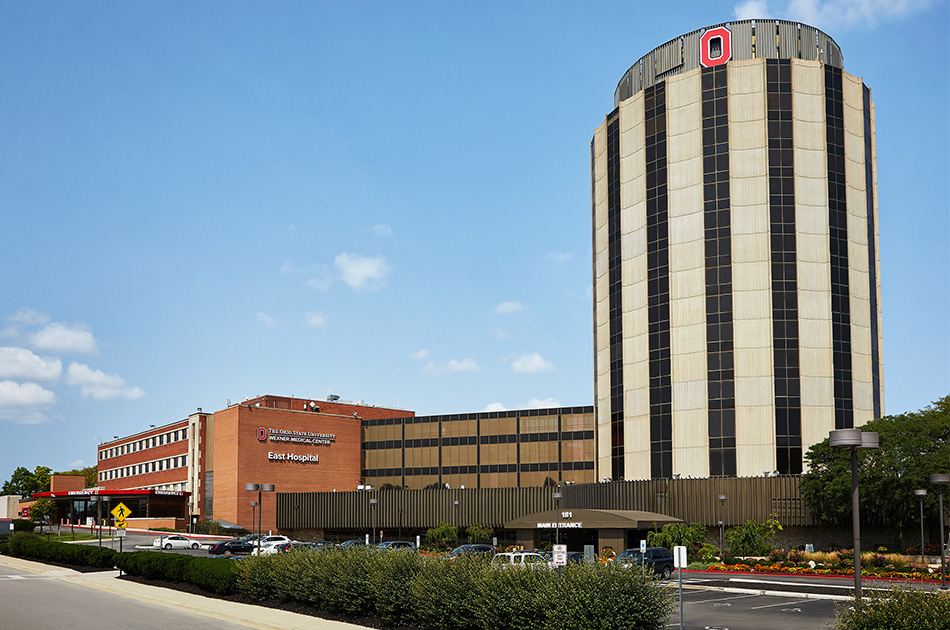 At the other end of Taylor Avenue, Outpatient Care East opened in 2011 under PACT’s compact with the city and housing authority. It offers primary care and a range of specialties, and it collaborates with East Hospital on Healthy Community Day, held annually to provide free screenings, youth sports physicals, dental check-ups and other services via more than 50 collaborators.

“We also have the diabetes research home base at Outpatient Care East — that’s for the whole health system, all centered in this community setting,” Glover says. “We really have done an intentional job in trying to be responsive to the kind of conditions people are experiencing in this community.”

Next up in terms of health care is a small center looking to make a big impact. Earlier this year, Wexner Medical Center purchased the former Columbus Metropolitan Library Martin Luther King Jr. branch, which moved up the street, to establish a Healthy Community Center. In addition to an emphasis on decreasing obesity, heart disease, diabetes and cancer, community members expressed hopes for a demonstration kitchen to host cooking classes and nutrition counseling along with a café that serves healthful foods.

“Watching our kids get excited and envision themselves standing on that campus as medical students was powerful,” says Tei Street ’89, who directs the health sciences academies program for Ohio State. “On the way back on the bus, not one kid had earbuds in. They were all excited and talking about what they had experienced.”

‘People see it, they feel it’

The youngest residents are the focus of another major PACT agreement, this one with Columbus City Schools and aimed at increasing the success of K-12 students and, ultimately, the graduation rate at East High School. Inspired by a seed planted when former Wexner Medical Center CEO Dr. Stephen Gabbe developed a relationship with Near East Side students, the partners designated six schools — East High, Champion Middle School and four elementaries — as health sciences academies in 2014.

The aim is to increase rigor, set students’ sights high and help parents meet challenges to become stellar coaches and advocates for their kids. That means looking at every opportunity through the lens of the health sciences, from simple reading assignments to field trips for eighth-graders to Ohio State’s medical campus, where they interact with staff along with med school students who hail from their neighborhood. 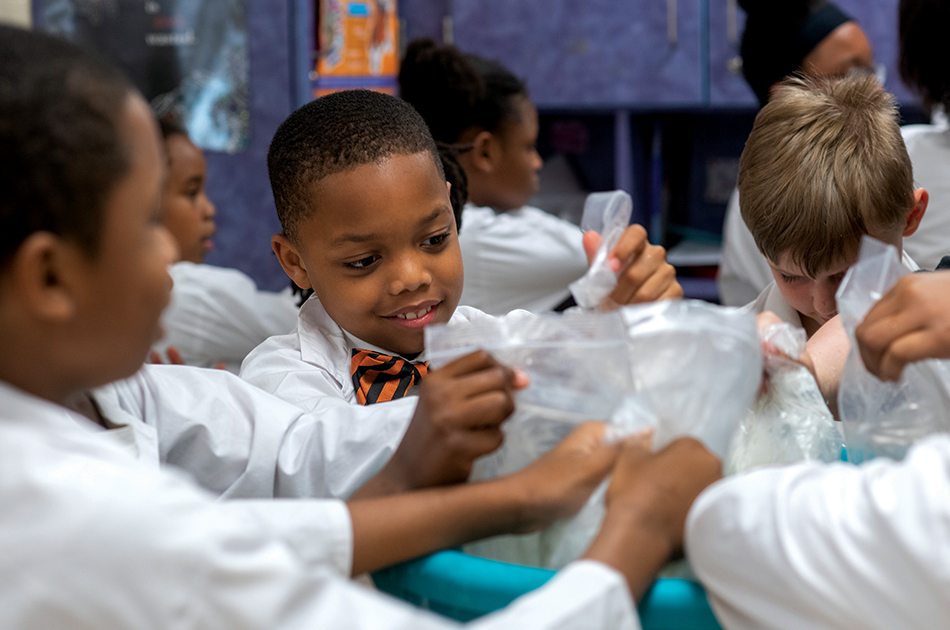 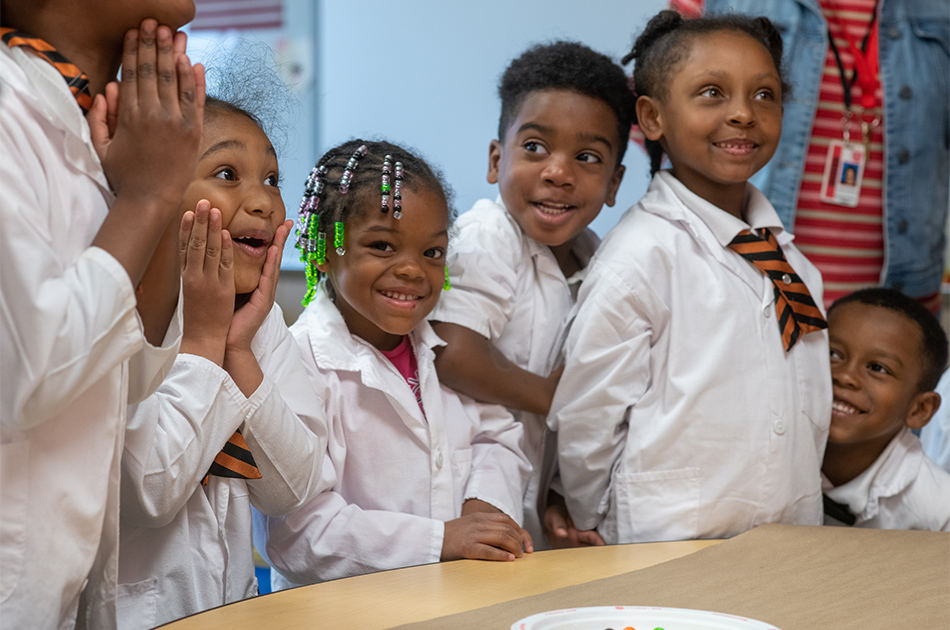 A science lesson teaches prekindergarten students at Eastgate Elementary the concept of absorption.

In Eastgate Elementary hallways — where little lab coats on hooks line the walls, students’ experiments are under way in classrooms and nurses who have adopted each classroom are interacting with youngsters — medicine is high profile. At this and the other academies, med center and PACT staff cheer students as they arrive on the school year’s first day.

“Our kids and teachers love, just love, the partnership,” says Eastgate Principal India Wilson. “You can just see the excitement when the nurses are here. They have fantastic lessons — very creative and very engaging.”

And while the energy in the schools is palpable, Street points to data as evidence of success. With results from three years of the 10-year endeavor in the books, three schools have jumped one to two levels on the state’s report card and the East High graduation rate is up nearly 8 percentage points.

“When you bring a presence like Ohio State to an area that has been all but forgotten, people feel it, they see it,” Street says. “It’s common for parents to walk through here and see nurses from East Hospital in their scrubs. It says, ‘Oh, they do care about us, and they do care about our kids.’ So part of what this partnership is about is changing the mindset and helping everybody to know that we’ve all got a role to play.”

Unveiling of riches
Uncover a wealth of stories from throughout Ohio State’s first century and a half, discovered and amplified anew by a groundbreaking project of University Archives.
Link to Unveiling of riches
Smart moves
Discover how Ohio State is helping define what it means to be a smart city and campus in the 21st century, harnessing data and technology to improve lives.
Link to Smart moves

Unveiling of riches
Uncover a wealth of stories from throughout Ohio State’s first century and a half, discovered and amplified anew by a groundbreaking project of University Archives.
Link to Unveiling of riches
Smart moves
Discover how Ohio State is helping define what it means to be a smart city and campus in the 21st century, harnessing data and technology to improve lives.
Link to Smart moves