During a “walk audit” with Age-Friendly Columbus, residents demonstrate the challenges they face getting around the city. That information helps build more accessible communities.

By focusing on people, a partnership involving Columbus and all 15 Ohio State colleges is defining what it means to be a smart city and campus in the 21st century and beyond. Designed to serve as a model for the nation, the project illustrates how we can mine data and drive technology to improve lives.

Three years ago, Daniel Sinclair wouldn’t have thought twice about crossing the street. But a stroke slowed life down, and now the 77-year-old needs 38 seconds and the help of a cane to cross four lanes.

The world doesn’t always have that kind of patience.

Recovering from a stroke “opened my eyes to a lot of things,” Sinclair says. “I had not paid attention to any of this stuff.”

He’s chatting inside Blackburn Community Center, where about 20 people have returned from a drizzly walk in Columbus’ Olde Towne East neighborhood. They’ve gathered to show researchers with Age-Friendly Columbus and Franklin County what it’s like to traverse cracked sidewalks and unforgiving traffic when you can’t see, or when your particular body isn’t what the world is designed to accommodate. 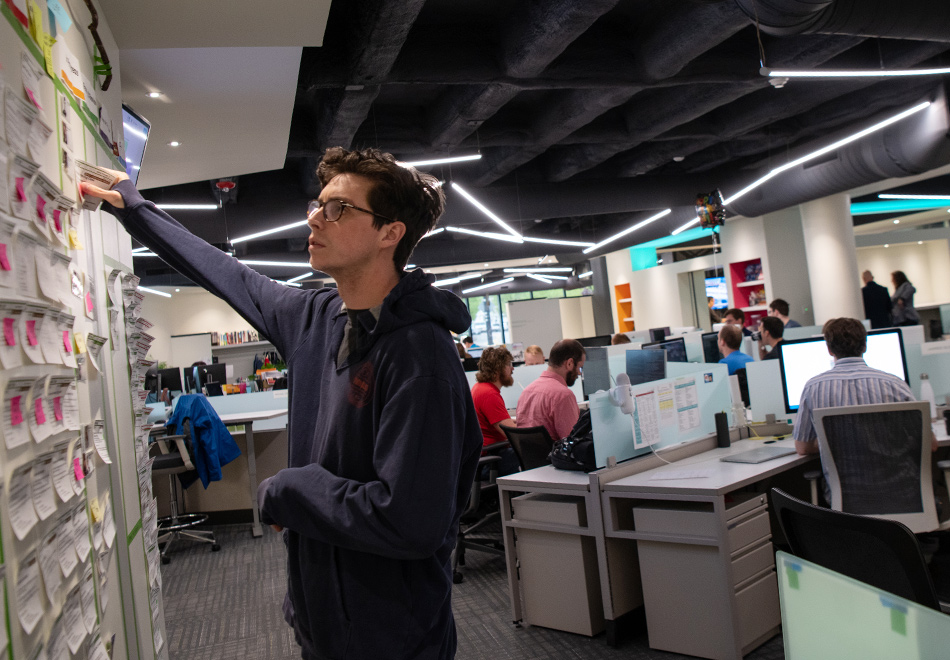 The words “smart city” often conjure images of driverless cars zipping down the highway and drones plopping packages on your doorstep. And while that’s not wrong, being “smart” is much more — it’s about applying what you know to make the world operate more effectively and efficiently. It includes, for example, timing how long it takes people like Sinclair to cross the street — and then adjusting the traffic signal.

“When we talk about ‘smart initiatives’ and technology, we need to be sure we are focusing on the end user,” says Katie White, director of Age-Friendly Columbus, a community collaboration housed in Ohio State’s College of Social Work. “What Age-Friendly does is start with that end user.”

In 2016, Columbus beat out 77 other cities to win the U.S. Department of Transportation’s Smart City Challenge, a contest to identify and learn from the U.S. city with the best plan for using technology, data and applications to move people and goods cheaply and efficiently. With this came a $50 million federal grant and the birth of Smart Columbus.

As the primary research partner for Smart Columbus, Ohio State is at the forefront of finding smart solutions to improve our lives, from how we move and use energy to how we work and consume health care.

“A lot of talk around smart cities is around the data and technology, but it’s the people who matter. This is an opportunity for us to make a difference and do something pretty special.” Danny Freudiger

These projects truly aim to change lives. One, for instance, will collect data to see whether better access to transportation can cut infant mortality rates in Columbus neighborhoods where babies are dying at four times the national average.

Run by the team of Dr. Erinn Hade, a research assistant professor in Ohio State’s Department of Biological Informatics, the prenatal trip assistance program will study hundreds of pregnant women from at-risk Columbus neighborhoods — through their pregnancies and eight weeks after birth — and offer expanded smart transportation services so women can get to places such as the doctor’s office and grocery store.

Ohio State committed $15 million to the Smart Columbus effort — $2 million in cash and the rest as in-kind support.

While assisting the city, the university also is looking to transform its campuses into smart communities through an initiative called Smart@OhioState.

“The university has incredible assets and ambitions in the smart space — in mobility, teaching and learning, health and wellness, and energy and sustainability,” says Smart Cities Relationship Director Courtney Falato, who leads the university project. “‘Smart’ means leveraging connected technology and data to improve the quality of life, exactly what we hope to achieve with Smart@OhioState.”

Two obvious parts of the university’s smart story are its Center for Automotive Research, where students and staff design electric and autonomous vehicles, and the Transportation Research Center, an Ohio State-managed test-track facility about 50 miles from the Columbus campus. The latter is the United States’ largest independent vehicle test facility and automotive proving ground.

While those assets help drive Smart@OhioState, it encompasses much more. All 15 of the university’s colleges have been engaged in the project, which aims to — among other goals — improve residents’ mental and physical health while reducing resource consumption, neutralizing carbon emissions and minimizing waste. Importantly, it works to groom students into knowledgeable consumers and innovators in a smart world.

“The university is already transforming through smart technologies: Faculty leverage technology in teaching, our Ohio State app has real-time arrival data for buses, our medical center has a bedside app to better engage patients,” Falato says. “Yet there is still more we can do. Smart@OhioState’s ambition is to transform our statewide university into a living laboratory for connected technology and create more livable, sustainable and socially just communities.

“That is powerful. That is big.”

This all starts with data, says Maryn Weimer, Ohio State’s director of mobility. She oversees the research aimed at solving mobility challenges on campus in a smart way.

“Instead of jumping to solutions and technology deployments across campus,” Weimer says, “we are focusing on collecting and analyzing our many, many data sources to truly understand mobility challenges.”

In other words, you can’t put the cart before the horse. All the data that’s being compiled and analyzed in spreadsheets today will be the basis for the Ohio State campuses of tomorrow. Along the way, the university will deploy new technologies, innovate with forward-thinking industry partners and provide unparalleled research opportunities for students.

The Smart Campus student group formed in 2017 is among the early leaders. Its president, Danny Freudiger, a doctoral student in mechanical engineering, says students are increasingly involved in how data and technology can change lives.

In its short existence, the group has worked with a senior-living facility to increase residents’ confidence in using app-based services such as Uber and Kroger ClickList and is helping to develop a similar system for patient courtesy shuttles on the medical campus.

“Our goal is to help them scale this effort through a technology platform and also do something meaningful with the data-collection side of it,” Freudiger says. Ultimately, he adds, it’s about making sure the food ends up on someone’s plate.

“A lot of talk around smart cities is around the data and technology,” he says, “but it’s the people who matter. This is an opportunity for us to make a difference and do something pretty special.” 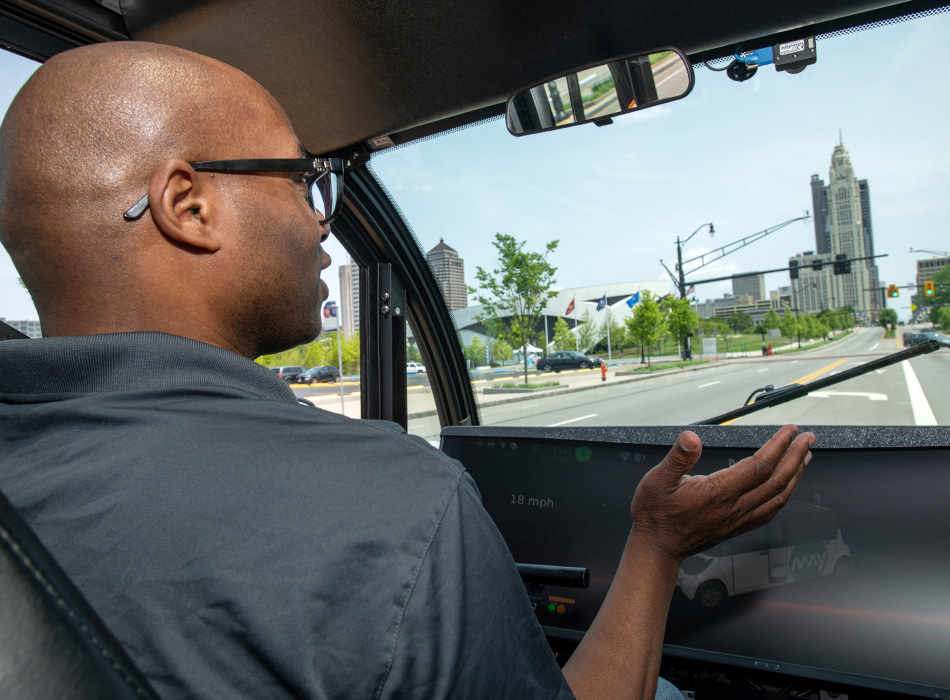 Maurice O'Bannon, who works for May Mobility, demonstrates his hands-free monitoring of one of the company's autonomous vehicles. 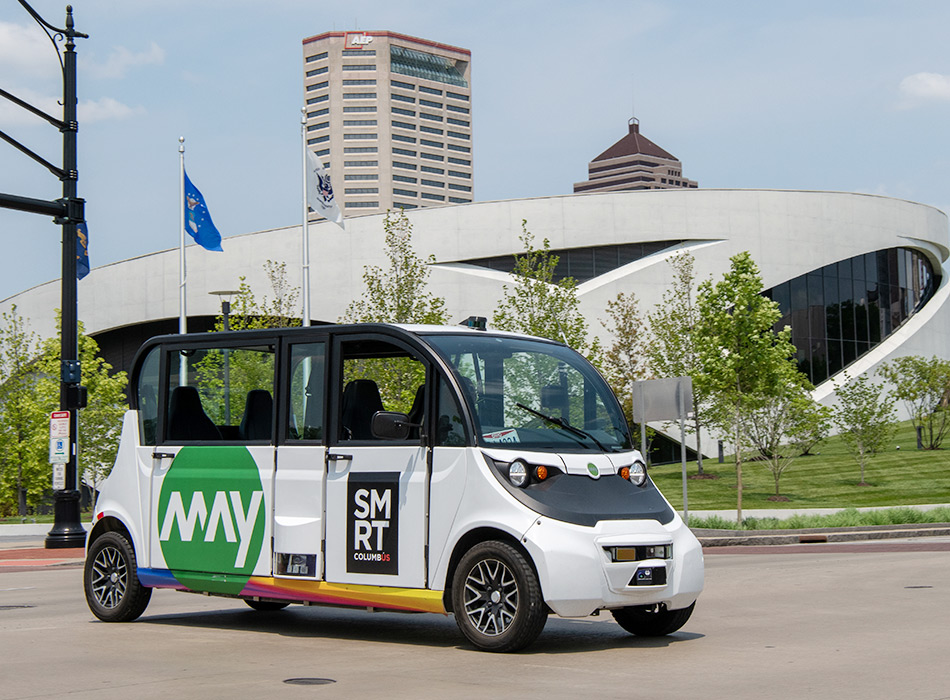 This is one of Ohio's first self-driving shuttles, which give tourists an easy way to explore Columbus' downtown district.

People are at the center of Katie White’s work, which is why Age-Friendly collaborated with Smart@Ohio State. She and her team have spent the past few years listening to the concerns of more than 1,000 older adults in central Ohio.

Part of an international movement of age-friendly communities under a World Health Organization umbrella, their program is in the fourth year of a five-year effort that involves collecting and using data to make smart improvements in the community.

“Looking at dignity and worth of the individual, accessibility, equitability — all of those mainstays of the College of Social Work pair perfectly with what we’re doing,” she says.

Through surveys, focus groups and audits such as the one on that rainy day in Olde Towne East, White’s team examines where residents have difficulty getting around, both behind the wheel and on foot. To improve their mobility, she says, Age-Friendly is planning a collaboration with a major ridesharing service to provide safer transportation options. The program is working with another partner to implement a bus loop service in the Hilltop neighborhood.

White also works to bridge the needs of the community’s older generations with the aspirations of young residents. Over the winter, she taught a course called Change Agents at Metro Early College High School in Columbus. The course, for middle school students at the STEM-focused school, explored such topics as ageism and the design of apps with older adults in mind.

With all this data comes privacy concerns. That’s where Ohio State’s Moritz College of Law and Translational Data Analytics Institute step in.

“‘Smart’ means you use data to solve problems,” says Dennis Hirsch, law professor and director of Moritz’s Program on Data and Governance. “Any smart city is going to use a lot of data, including data about people … and that, of course, raises privacy issues.”

Getting the data piece right is essential to the success of Smart Columbus. If people get nervous about how their personal data is being used, Hirsch says, they might resist an effort that’s meant to improve their lives.

“Smart Columbus is at the forefront of this,” Hirsch says. “Our data privacy plan is state of the art. It will provide a model for other cities and, in that way, Ohio State and Smart Columbus will be able to influence the shape of privacy in smart cities for years to come.”

Taking the lead in self-driving cars

Robert Fenton, a professor emeritus of electrical and computer engineering, spent a lot of time in the mid-1960s and early 1970s testing his cars on unfinished portions of Interstates 70 and 270 as well as on Sawmill Road, a once-sleepy farm lane that’s now a major Columbus artery.

“At the time,” Fenton says, “our work was probably the most advanced in the world. Very few people were doing it.” 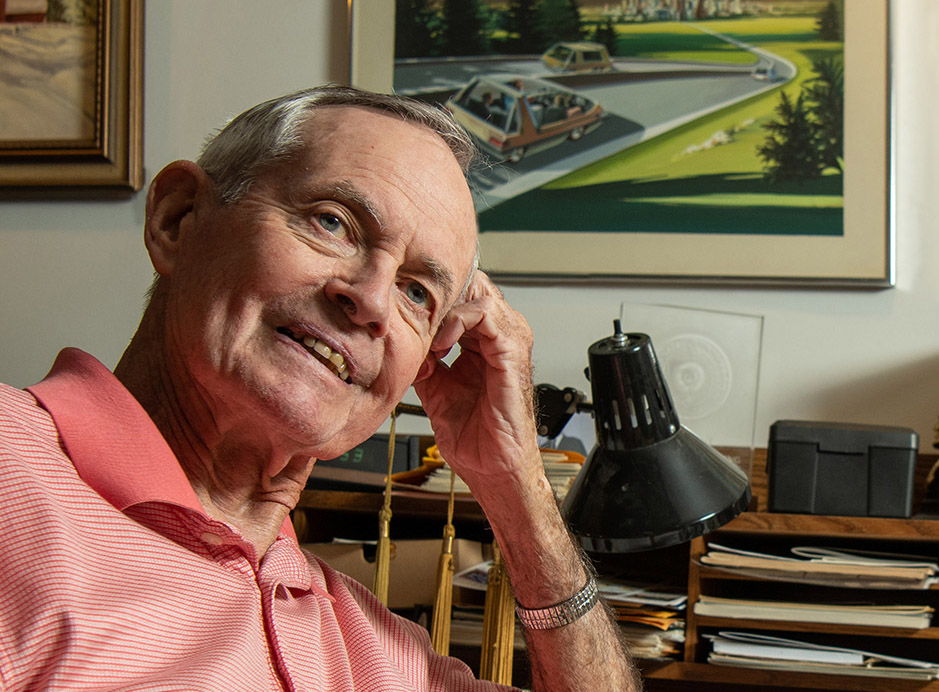 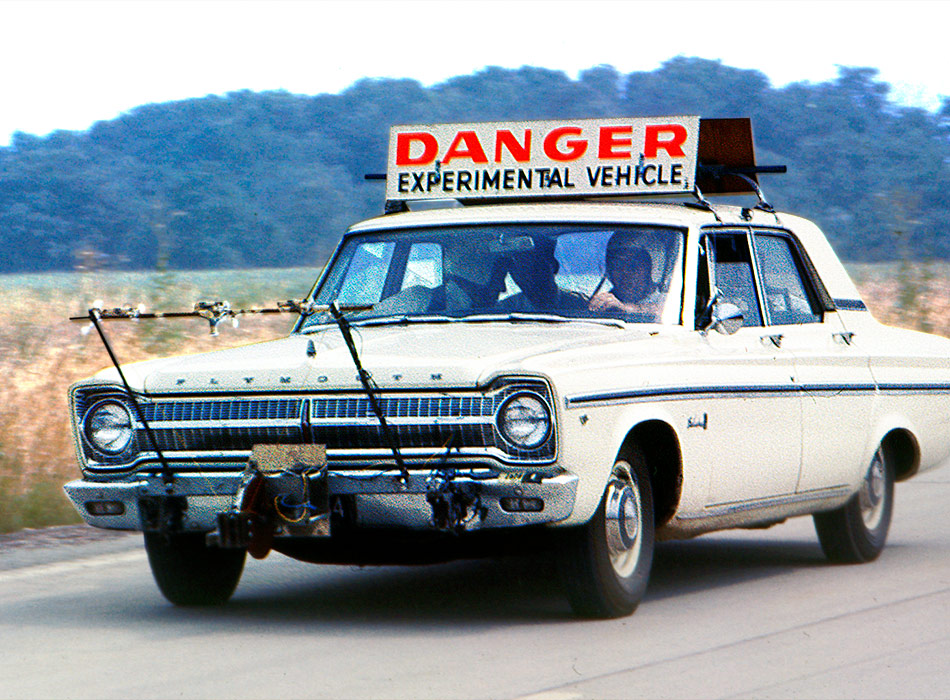 One of the autonomous vehicles pioneered by Professor Robert Fenton

Fenton and his team placed a guide wire down the center of the roadway and ran current through it, creating a magnetic field that enabled their control of the cars. The first car was a 1965 Plymouth sedan modified with sensors and other instrumentation developed at Ohio State.

“It worked beautifully,” he says. “We were automatically steering at speeds up to 85 mph.”

Unfortunately, the cost of the guide wire approach was too high to maintain on a large scale. To solve for that in later iterations, he says, the team bounced signals off guardrails and placed side-radar sensors on the car to keep it on track.

The pioneering research of Fenton and others involved in traffic projects at Ohio State led to development of the Transportation Research Center in East Liberty, Ohio, in the 1970s. In July, the TRC broke ground on its SMARTCenter, which will be the largest real-world testing site for automated vehicles.

Bob Beasley ’94 is a freelance writer in Powell, Ohio.

Share via Email
You Also Might Like
View All
A PACT for the future
Learn about a unique partnership that combines the strength of Ohio State, Columbus and the local housing authority to renew the historic Near East Side.
Link to A PACT for the future
Meeting the world’s challenges
Explore some of the many ways Ohio State deploys people, expertise, knowledge and resources to help the world solve some of its most entrenched challenges.
Link to Meeting the world’s challenges

You Also Might Like
View All
A PACT for the future
Learn about a unique partnership that combines the strength of Ohio State, Columbus and the local housing authority to renew the historic Near East Side.
Link to A PACT for the future
Meeting the world’s challenges
Explore some of the many ways Ohio State deploys people, expertise, knowledge and resources to help the world solve some of its most entrenched challenges.
Link to Meeting the world’s challenges