Nike of Samothrace stands more than 9 feet tall from base to wing tip and is perched atop a 6-and-a-half-foot pedestal.

Passing the test of time

In the Louvre and Thompson Library alike, this Greek goddess has endured a lot of attention, not all of it wanted. Lesser women might have buckled. But not our Nike.

Headless, armless, but with wings to die for, the towering replica of the Nike of Samothrace in Thompson Memorial Library has been admired, photographed and subjected through the years to various indignities by waggish students and, possibly, supersonic aircraft.

In 1934, one young man bent on recording the Winged Victory’s dimensions climbed atop a table and managed to take a single measurement before being confronted by a librarian. “Miss Victory’s hips measure 75 inches,” The Lantern reported. “She seems our best bet for Homecoming Queen.”

John Penniman took a more reverential view in the acknowledgments section of his 2017 book, Raised on Christian Milk. Now an assistant professor at Bucknell University, he lived in Columbus and spent hours in Nike’s presence as he finished his dissertation for Fordham University in the library’s Cohen Family Grand Reading Room.

“There is a violent grace to her posture … as she steps forward to shout in jubilation,” wrote Penniman, for whom Nike signaled the successful end to his research.

The original statue of the Greek goddess of victory was sculpted from marble around the second century B.C., presumably to mark a significant naval triumph. It was unearthed in 1863, minus several appendages, and has been a star attraction at the Louvre since 1884. 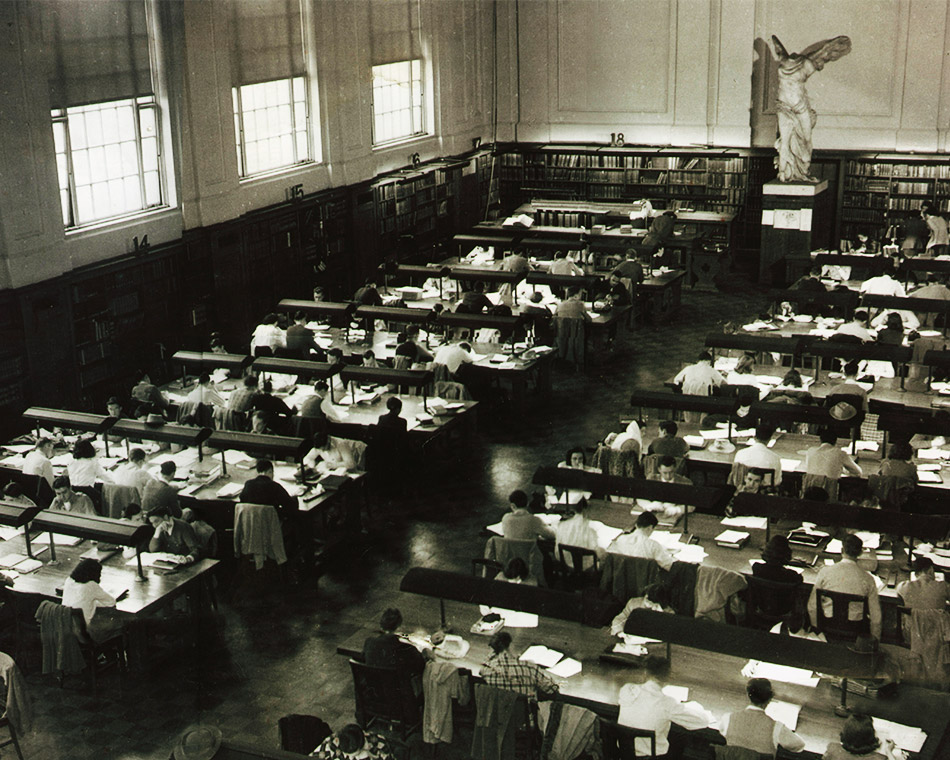 The original sculpture was a gift from the Class of 1892 and was installed shortly after the library opened in 1913. 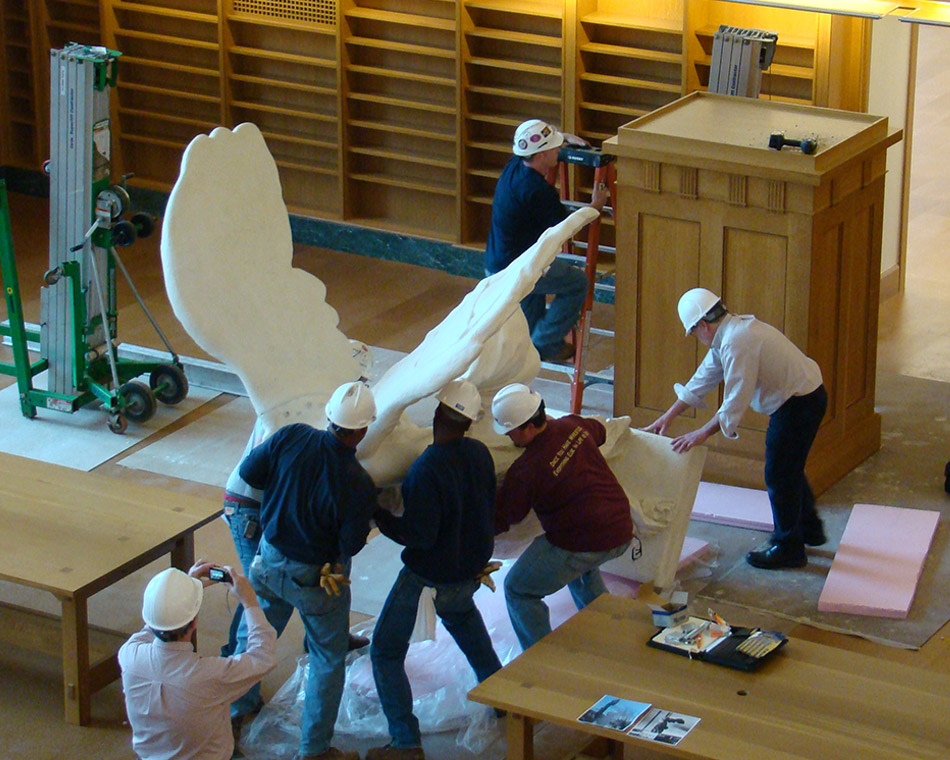 After a 50-year absence, Nike of Samothrace returned to Thompson Library in 2009.

Ohio State’s current statue — more than 9 feet tall from base to wing tip and astride a 6-and-a-half-foot pedestal — is the university’s second full-size replica. The first was a gift from the Class of 1892 and was installed shortly after the library opened in 1913. Made of plaster, it gradually deteriorated. In 1953, director Lewis Branscomb wrote to a university committee about the “hazard to life and limb posed by the huge, cracking statue.” It continued to crumble — due partly, some sources say, to vibrations from sonic booms — and finally was removed in 1959.

Fifty years later, as part of the Thompson Library renovation and with support from Karol Schiff Wells ’58 and Richard Wells ’56, a new replica made of sturdier material was commissioned under the guidance of library director emeritus Bill Studer.

“Bill deserves credit for championing the cause of replacing Nike in her place of prominence,” says Wes Boomgaarden, associate professor emeritus and project officer for the library renovation.

Studer tracked down a firm in Massachusetts that could create the latest replica from the same casting as the 1913 version, Boomgaarden says.

Lynne M. Bonenberger is a freelance writer and editor in Columbus. She joined the staff of Ohio State Alumni Magazine in 1993 and served as editor from 1997 to 2014.

Where’s Brutus?
Keep your eyes peeled for Brutus Buckeye and famous Ohio State faces in this interactive game set in the Ohio Union and inspired by puzzles like “Where’s Waldo.”
Link to Where’s Brutus?

Where’s Brutus?
Keep your eyes peeled for Brutus Buckeye and famous Ohio State faces in this interactive game set in the Ohio Union and inspired by puzzles like “Where’s Waldo.”
Link to Where’s Brutus?