A hand up for future Buckeyes 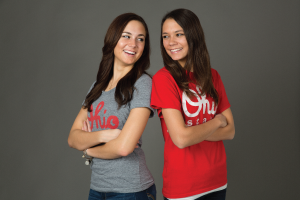 It’s all about providing opportunities.

Roger Moser ’57, vice president of the Alumni Club of Lucas County, acknowledges that many of the students the organization awards scholarships to don’t return to northwest Ohio to start careers.

“We do get a few,” he said, “but most of our kids who go to Ohio State get connected in some way and find employment elsewhere.”

With one eye on tough economic realities and another on the future of their homegrown students, club members continue to build their endowment in order to give a helping hand to the next generations.

The Robert Momsen Scholarship Fund is named for a longtime member and former Ohio State football standout. The endowment totals more than $325,500, which allows the club to award scholarships each year to at least four students entering Ohio State.

An annual golf outing is the club’s biggest source of funds. Grassroots efforts help, too. “We’re constantly raising money,” said secretary and treasurer Shirley Moser. And much of the merchandise the club sells — including Buckeye-themed jewelry and Christmas ornaments — is the Mosers’ handiwork.

Roger and Shirley serve on the committee that screens scholarship applications and interviews finalists. The club alerts public and parochial high schools in the county to the scholarship opportunities and usually gets about 35 applicants. Five committee members narrow those down to 10, then interview them to choose the award winners.

There is no shortage of outstanding candidates. “Quite a lot of them just blow [others] out of the water with the way they handle themselves,” Roger said.

Jennifer Lucas, now in her first year at Ohio State, is a recent recipient. Her sister, Katherine, won a scholarship in 2011.

The fact that sisters received scholarships is a coincidence (along with the fact of these particular sisters’ last name). “They’re both neat kids, very outgoing,” Roger said. Shirley added: “They stood out among everyone else and impressed us with who they were and what they wanted to be.”

Katherine, who will graduate in May with a degree in marketing, is a sports fan who said her dream job would be with the Detroit Lions. Jennifer hasn’t decided on a major but is focused on community service, including a recent project with homeless people in Toledo and an upcoming trip to Nicaragua.

Both sisters are quick to thank those who have aided and encouraged them, including the Lucas County club — “They’ve been so kind to us,” Katherine said — and their parents.

And there’s also Don, their next-door neighbor as they were growing up.

“He always let us help him raise his Ohio State flag on game days,” Jennifer said. “He taught us about the Buckeye tradition, and he was very proud that we both went to Ohio State.”

For details: More information on the Alumni Club of Lucas County and its Robert Momsen Scholarship Fund is available at lucasbrutus.com or by emailing OSUACLC@lucasbrutus.com.