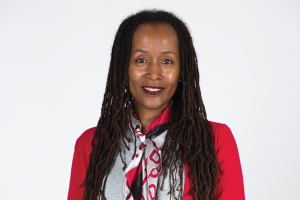 Jacquelyn Meshelemiah sees herself as highly spiritual and eternally optimistic, traits that help her remain positive as a researcher and activist focusing on the travesty of human trafficking.

“You have to be hopeful to stay in this area of research,” explained the three-time Ohio State graduate and associate professor of social work. She believes that like the transatlantic slave trade, which endured for more than 300 years, human trafficking will end someday. “It’s going to take a while, but trafficking will end because of activism.”

Internationally known for her research and efforts to fight for change, Meshelemiah has placed a spotlight on the world issues of human trafficking, prostitution and drug abuse. She shares her mission with her students.

“Ten years ago, few were talking about human trafficking. Jacquelyn was one of the first to call attention to the problem,” College of Social Work Dean Tom Gregoire said. “Because of people like her, we have totally changed the way we think of human trafficking.”
A single mother of five, ranging from 12 to 20 years old, she has created an atmosphere of compassion and gratitude in her home. She’s also passed on her devotion to Ohio State: “They all plan to come here,” Meshelemiah said. “They grew up on campus with me at work — they had no choice. My goal is to have all five of them graduate from Ohio State.”

On choosing to focus on human trafficking

Truly, I did not choose it; it chose me. While I was at SUNY Buffalo, the university received a grant to study prostitution. Men were accosting women and girls in one of the surrounding communities, and it had become a huge problem in the area. We were asked to develop an instrument to collect data. During the process, I heard a woman speak about her experiences with a pimp who forced her to have sex with dogs. The woman was tearful and shaky, with her head leaning back. She was trying so hard not to fall apart. It was 1996, and what she was forced to do was simply called prostitution then, but I knew that wasn’t the right name for it.

Hearing the woman speak was a traumatic experience for me, and it changed my life. I wanted to get the word out that prostitution manifests itself in many forms. The term human trafficking came to the forefront with the United Nations’ global initiative to fight trafficking and, in the United States, with the creation of the Victims of Trafficking and Violence Protection Act in 2000. According to U.S. law, adult sex work is trafficking if it involves force, fraud, or coercion.

On what all of us can do to help end trafficking

It is important that judges, law enforcement, emergency room workers, attorneys and others are aware of human trafficking. Health care workers, child-welfare workers, social workers and teachers, for example, can look for blatant signs and symptoms of trafficking. We can volunteer at safe havens for the victims of trafficking. Immigrants often are victims. We need to keep our eyes open. One other thing we all can do is become more conscientious consumers. On the Internet, we can find lists of goods not to buy — goods produced by child labor and forced labor, oftentimes trafficked persons.

On using her research in teaching

I teach a class specifically on human trafficking, but I also integrate my research into all of the courses I teach. This past summer, I taught a class on mental illness, including the range of disorders that the trauma from human trafficking can cause. I just finished a four-week massive online open course, or MOOC, that drew more than 30,000 students from 187 countries. The course was a way to increase awareness and to give access to those who may not have access to an academic class. The interactive course was intense and took a lot out of me — although it was well worth it. There’s also an iTunes U human trafficking course with videos and PDF files that has had some 25,000 downloads.

On how she remains positive

I’m a very spiritual person. And I do believe I’m an eternal optimist. And did I mention my love for the College of Social Work? The atmosphere there is encouraging and supportive. It’s a place like no other. The dean, Tom Gregoire, supports my work 110 percent.

A little chat about Life

Jacquelyn Meshelemiah is a #BuckeyeforLife