Close despite the miles 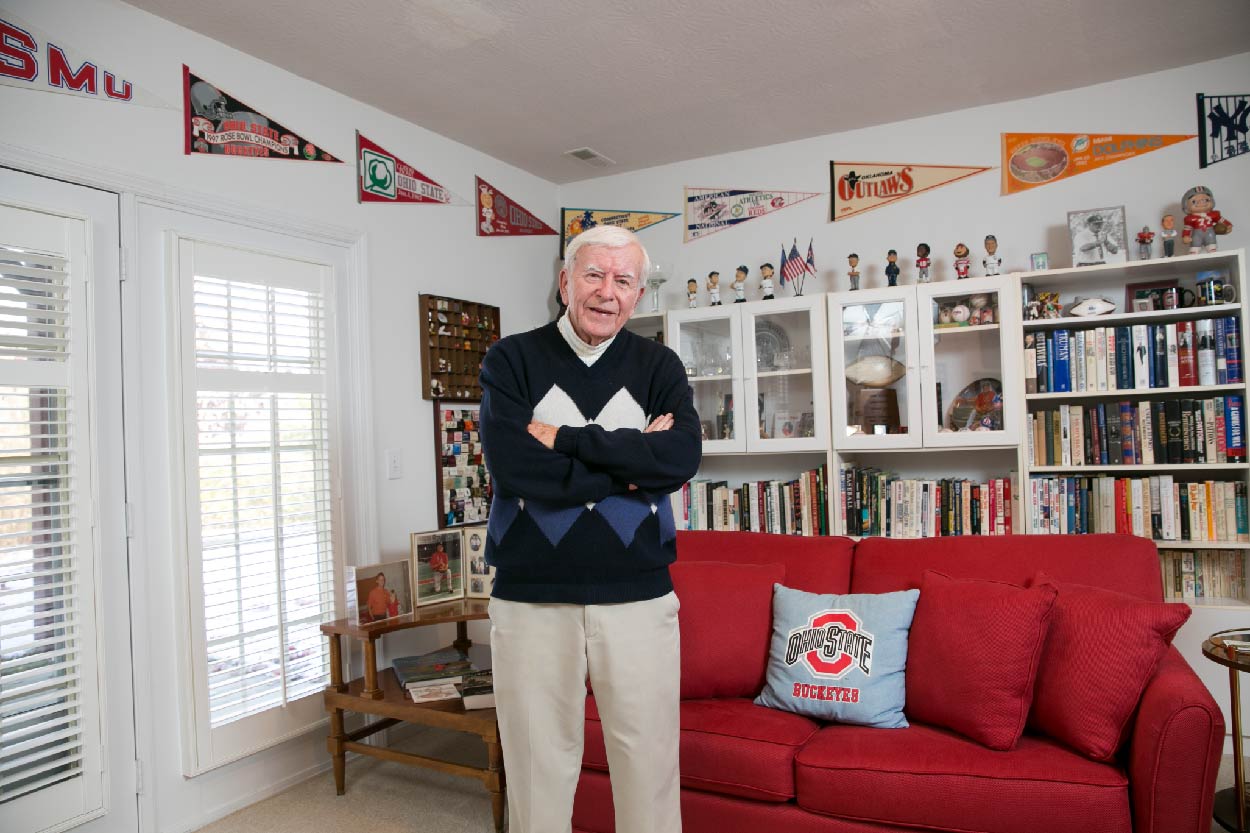 A Columbus native, he earned a bachelor’s degree in business administration from Ohio State in 1959, then served in the Army. This foundation served him well in a career overseeing corporate relations at Oral Roberts University and portfolio management for Fourth Investment Advisors. He also was director of personnel for the National Labor Relations Board before becoming mayor of Tulsa in 1986.

Over the years, Crawford has connected with some high-profile people. Then-President Ronald Reagan nominated him for the Harry S. Truman Scholarship Foundation Board of Trustees, and he befriended Jack Nicklaus and President George H.W. Bush.

It was Woody Hayes who encouraged him to take on the mayor’s race. “I had no choice,” Crawford joked, “because I couldn’t face Woody if I backed off.”

Yet, despite all his professional successes, Crawford is most delighted in discussing his marriage to his beloved late wife, Joan, who was there for many of the high points.

“With all the things that have come to me, Joan is still the greatest thing that ever happened in my life,” said Crawford, who now lives in Upper Arlington.

When did you and Joan meet?

We met at Ohio State in 1954 at a dance. I saw Joan across the room and asked to be introduced to her. I knew on our first date that she was definitely “the one.” We made it official two years later and then spent 56 years together until her passing in January 2012 at the age of 77. We shared a mutual respect and unconditional love that truly made our marriage wonderful. I tell people that Joan and I danced that first night at Ohio State and kept dancing together for 56 years.

Our daughter, Pam, works at NBC and recently earned two Gracie Allen awards for her work in bringing supplies for children in Havana, Cuba, and for her work as an embedded reporter in Iraq and Afghanistan. Our son, Doug, has been an actor in New York and has spent the last six years with the Las Vegas production of Jersey Boys.

How did Ohio State prepare you for the future?

My Ohio State education and professors were second to none. Our parents told my brother and me that we had to go to college, but that the decision to stay there was ours. They knew we’d see the benefits of a solid education.

We were an average family so I worked my way through OSU with a job three nights a week from 11 p.m. to 7 a.m. at what was the original university hospital. I delivered supplies to various floors and stations. I learned to juggle the work with classes and studying. I also caddied at country clubs and sold beverages at Ohio Stadium. Our father was firm about teaching us Economics 101 and earning money to spend money. So we learned to work and save.

How do you remain connected to Ohio State?

I am a member of Phi Delta Theta and stay in touch with some of my fraternity brothers. I’ve served on the OSU Athletic Committee and am a President’s Club donor. I especially enjoyed a tour to Normandy, France, this summer through the university’s history department. It was an incredible experience.

You’ve received numerous honors. Can you share a few?

When Joan and I moved back to Columbus in 1997 to be closer to relatives, we became volunteers at Ohio State and the Fellowship of Christian Athletes, started by Tom Landry Associates. Joan and I received FCA’s Lifetime Achievement Award. Joan also wanted to continue helping children and became involved with Worthington Schools, where she received a Volunteer of the Year Award. In 2011, I received the James A. Rhodes Distinguished Service Award from the Executive Order of the Ohio Commodore. It recognizes service to the state of Ohio.

Why did you choose the College of Social Work for your support?

Along with our children, I wanted to honor Joan’s memory and all that she did for others. We established the Joan L. Crawford Endowed Scholarship in Social Work to help Ohio State students working in child welfare, especially those with a history of community service. Although she earned bachelor’s and master’s degrees in education, social work was an ideal choice to honor her lifelong dedication.

In Tulsa, Joan developed a program for a local school system that involved visiting homes or hospital rooms to teach children who were unable to attend school because of medical or other reasons. She was named one of Tulsa’s “People of the Year.”

Joan also was a guest of the dean for a College of Social Work honors day at the Faculty Club. She was pleased by that experience and had long admired the students for their line of work and their passion for helping others that matched her own. And, of course, I wanted to support Ohio State, where our story began.

Alumna passes on the vibe