The Hewitts are raising their triplet sons with help from grandparents and the use of technology.

Kristen and Tom Hewitt of Baltimore, Maryland, were overjoyed to welcome identical triplets into their family in October. A medical rarity, the boys’ birth attracted national attention.

Of the 3.9 million babies born every year, there are about 430 sets of identical triplets. And only a handful are conceived without the use of fertility drugs.

“To have a patient with spontaneous identical triplets is incredibly rare," said Victor A. Khouzami, who delivered the babies at the Greater Baltimore Medical Center.

The boys weighed 11 pounds, 5 ounces collectively when they were born at 33-and-a-half weeks. After spending two weeks in the neonatal intensive care unit, Thomas III (Trip), Finnegan (Finn) and Oliver (Ollie) were able to go home.

The excitement began in March, when Kristen, a 2004 Ohio State graduate, had a sonogram.

“The sonographer got very, very quiet,” she said. “When she told us, I was shocked, thinking this doesn’t actually happen to people. Luckily, Tom and I work best under pressure, and we went into overdrive to figure out what I needed to do to be healthy and what we needed for the babies.”

“We’d been trying to get pregnant for two-and-a-half years, so I was ecstatic,” said Tom ’05, ’07 MS. “I thought, ‘Okay, if this is what God has given us, this is what we’re going to be dealing with, and this is going to be amazing.’”

The healthy babies are changed and fed every three hours. They are so active Tom compares them to Mexican jumping beans. Fortunately, the new parents have help.

“My parents sold their house in Ohio and moved to Baltimore to help us,” Kristen said. “They’ve been our saviors with getting sleep and keeping sane.”

Tom also learned technology can help. “I found this great application for our iPhones that syncs together to follow all the feedings, changings, weights and heights,” said the data-driven dad, who estimates the babies will use about 750 diapers per month.

“I got my master’s at Ohio State in city and regional planning, and I took that data-driven persona from schooling, and I applied it to these kids,” Tom said.

A color-coding system sets the babies apart. “Thomas III is scarlet and gray, because I’m Thomas Jr. and I went to Ohio State,” he added. “Finnegan has a primary color of green because his name is Irish, and Oliver is orange. We try to dress them in those colors, but as a back-up, we have a little piece of color-coded twine tied to their wrists and ankles.”

Kristen will use her training as a cosmetologist to give the boys different haircuts when they are old enough.

The couple met at Ohio State in 2001 after Tom played in a hockey game. Fourteen years later, they scored the ultimate hat trick. “A hat trick is when a hockey player scores three goals in one game, so it’s kind of our joke that we scored our own hat trick having three kids at one time,” he said.

The family lives in a two-bedroom row house and plans to begin looking for a bigger house in a year. “We are bursting at the seams,” Kristen said. 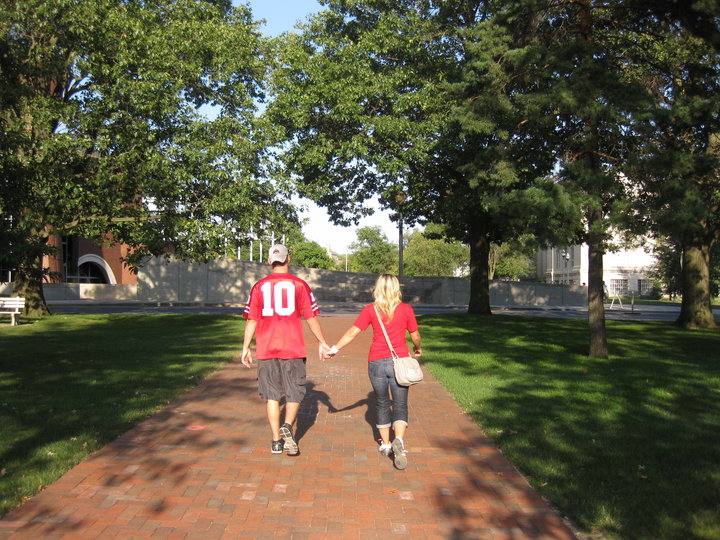 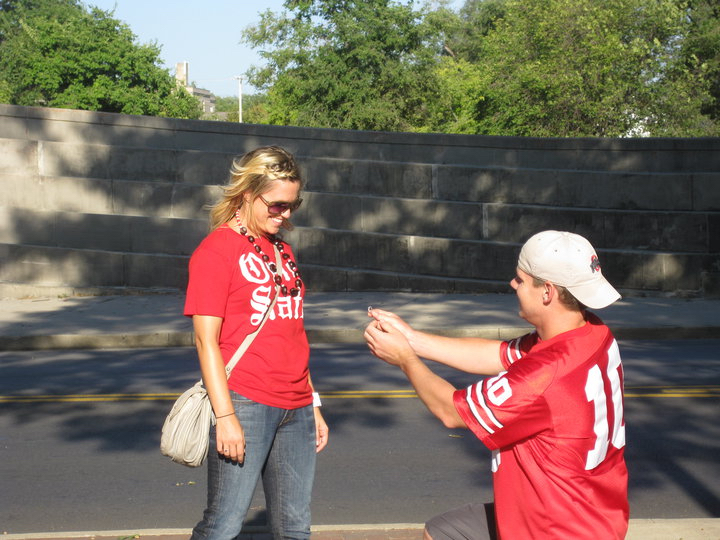 The Hewitts shared these photos of them taking the “Long Walk” from College Road to Thompson Library, after which Tom proposed to Kristen, in 2010. They settled on Oliver’s name after realizing his initials would be O.H.

What’s your favorite spot on campus?