He has broken fingers, hurt his back and broken or fractured both of his legs averaging speeds around 70 to 80 mph. Now Ohio State alumnus David Dean ’07 wants to see what going 100 mph on a street luge will do for him.

Nobody in the sport has eclipsed that mark. Coming closest is Canada’s Cédric Touchette, who set the current record of 98.71 mph in Les Eboulements, Quebec, on September 29, 2008. (And it’s official: Guinness World Records was there to measure it.) Even an Olympic ice luger, a role Dean aspired to before realizing his Ohio home wasn’t anywhere near a practice facility, has never broken 100 mph.

As a two-time street luge world champion (2005 and 2014), Dean already uses the newest equipment. But he wanted to see if some design tweaks could make him and his sled even more aerodynamic. Unlike street luge races, during which riders must slow before turns, a speed run takes place on a straightaway, where nuances such as wind and road conditions play a huge factor, leaving more room for effective equipment alterations.

“To an engineer, this was as basic as it gets: improve the aerodynamics of a bullet,” Dean said.

A fellow Ohio State alum directed him to Bob Rhoads, who coordinates the capstone program in Ohio State’s College of Engineering. Each year, senior engineering students choose a capstone project to work on over two semesters, and Rhoads was eager to have Dean submit his project for consideration. Students’ enthusiasm for the challenge made it one of the top vote-getters.

While the students had heard of street luge and perhaps even watched races on TV, none had first-hand experience with a sled.

“There was very little research done on street luge,” said Celli, who graduated in May with a degree in aeronautical and astronautical engineering. “Most of our ideas came from working closely with David, figuring out what had been tried, what hadn't, what worked, what didn't. Ohio State did a great job teaching us the basics of engineering, but when trying to tackle a real engineering problem for the first time, it was a little daunting.”

Dean showed the students videos of him racing and let them ride the sled down a small hill so they could understand the mechanics. Clifford Whitfield, an assistant professor in mechanical and aerospace engineering, was there to advise the students when they hit roadblocks.

The students began throwing out ideas right away, and one of the first was to use a cone at the front of the sled that would push the air around the wheels and trucks, or axles. That made it into the final design modification.

Even though not every idea would or could work, Dean was impressed with the students’ brainstorming. In fact, they read the entire street luge rulebook — something Dean has never even looked through.

“They wanted to look at redesigning stuff that to me is an industry standard,” he said. “One of the first things they wanted to redesign was the trucks. Maybe there is a different way to do it. I was real hesitant and wanted to say, ‘Oh, don’t mess with that. They already work well.’ But they weren’t jaded by their perception of what proper equipment is. They weren’t off-the-wall ideas, just different ideas.”

And Dean was floored by the team’s progress. Just two weeks into the project, the students had designs to show him.

Through trial and error and testing in a wind tunnel, the students settled on three modifications intended to reduce drag: adding the nose cone, creating a chest piece to push air over Dean’s helmet and installing a rear fairing that separates air at the back of the sled. 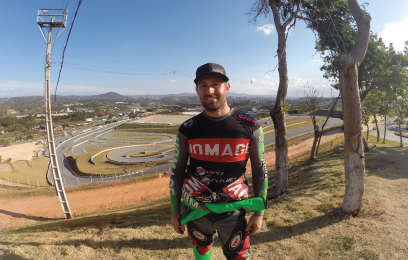 Dean stands in front of a street luge track.

Originally the students wanted to change the helmet — one of the largest sources of drag — but the rulebook noted helmet modifications weren’t allowed. So the chest piece was an ideal alternative.

“It directs airflow around the rider’s helmet rather than directly to it, reducing the overall pressure seen at the face of the helmet,” Celli said. “The trick was to find a design that accomplished this but didn’t result in the same amount of net drag or more.”

“They were coming up with basic ideas I already knew about and then tweaked them to come up with ideas I — other racers or luge designers — had never even considered,” Dean said.

Fry, who returns to Ohio State this fall to start his master’s in aeronautical and astronautical engineering, said this was the ideal capstone project.

“It really put everything I learned over the last four years into a realistic problem and solution,” he said. “Working with the sport was a great experience because of all the room for improvement that we had. It was really fun having so much creative space available to do almost anything we wanted with the sled.”

Dean is confident the modifications will push him past 100 mph.

Focus on being first

And if Dean sets the record?

“It would be something that I can always tell future employers and anyone who is interested that I was part of a world record team,” Fry said. “Achieving something that no other racer has done would be an incredible accomplishment.”

Now comes the hard part. Dean doesn’t have a sponsor, so he has to pay for the new parts himself along with travel expenses and use of the course (not all cities are willing to issue permits for a venture in which someone could die) and for Guinness’ presence. He puts the price tag at about $10,000. Dean plans to compete in a few races this year, too, but his focus is on becoming “the first.”

“If you ride a bike, you want to win the Tour de France. If you compete in an Olympic sport, you want to win a gold no matter how many other world championships you’ve won in the past. People have been flying airplanes for a long time, but it was something when the first person hit Mach 1,” Dean said. “One hundred is just a number, but it’s a cool-sounding number.”

Giving him confidence he can get there are the students’ expertise and ingenuity.

“As much as they want to get involved, I want them to do it,” Dean said. “As we’re manufacturing the parts and basing it off their computer designs and hard models, I’ll definitely be in touch with them, and I’m sure there will be some group emails back and forth, ‘Hey I did this.’ ‘Oh no, Dean, that’s wrong. We told you to do it this way.’ ‘Sorry, I’ll redo that.’

“I hope they’ll stay involved and will be able to give some feedback along the way. To be able to come back full circle to Ohio State and have it all come together, it’s awesome.” 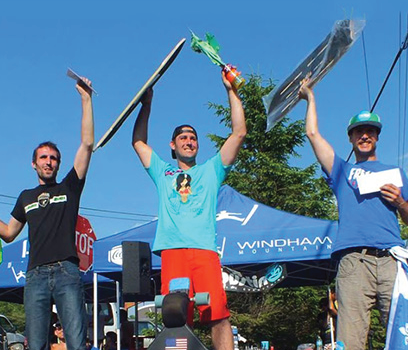 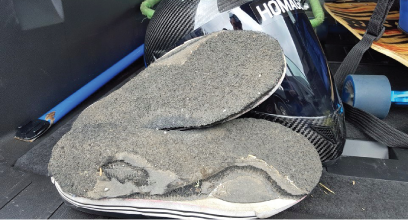 After a day of racing, the end result of David Dean’s shoes, which he uses as brakes and rudders during his ride.

With his parents’ permission, Dean became a human bullet.

The lure of extreme sports was strong with this one, but Ohio State alumnus David said his parents drew the line in his early teens: no dirt bikes; no motorcycles. They’re too dangerous.

To this day, Dean still isn’t sure how he finagled permission to do street luge. At 14, he fell in love with the sport after taking part in a qualifying race for rookies interested in ESPN’s X Games.

“Dirt bikers have their helmets and pads. We had full leather suits and Kevlar back armor,” Dean said. “For some reason I got away with that one.”

Lugers rocket down city streets or paved roads at speeds up to 90 mph on a four-wheeled sled that sits a mere half-inch above the pavement, then must deal with enormous G-force as they navigate hairpin turns using only their feet as brakes and rudders.

On the first practice run of his first race, Dean wrecked and broke two fingers. He taped them and kept going.

“The sleds can corner as hard as a motorcycle, so that much grip on a very small board with just two handles to hold on to is very interesting,” Dean said. “It’s five seconds of fury and ‘Oh my God, I’m going to fall off this thing,’ then you’re back on a straightaway and calm again.”

It took six years for Dean — then a student at Ohio State — to win his first race. The drive to succeed was always there, but the sport is a constant temptress to the runners-up.

“The guy who beats you might only beat you by 5 feet,” Dean said. “But in street luge, 5 feet is a long way. Yet it always feels so close.”

Dean’s perseverance paid off with a World Cup title in 2005, even though he hurt his back significantly during one of his races — an injury that has nagged him since. He won every race in Europe that year, then returned to the States and continued his dominance.

“The technical ability to get down the hill was always there,” Dean said. “And then somehow I just figured out how to race with those skills, and it came together all at once.

“It is very cool to be in college, when everyone is as broke as they are, and have the opportunity to travel a lot and see the world when I didn’t have a full-time job or a mortgage. My friends were scrambling to make beer money and I was scrambling to find my next plane ticket to Africa or Europe or wherever we were competing next.”

His reign was short-lived, though. In the summer of 2006, Dean had a horrible wreck in Sweden. He fractured one leg and broke the other and wasn’t allowed to walk for three months.

Then Dean graduated from Ohio State in 2007, and getting a job took precedence. He competed here and there, but never got into the full circuit again until 2014.

But what a year it was.

He needed to win the final two races — in Peru and Brazil — to win the title. He took them both and won his second world championship by two points — 4,536 to 4,534.

Dean still wants to race, but he has used up his vacation time (he works in Columbus as a field marketing manager for a Fortune 500 company) as well as his racing fund. Without a full-time sponsor, riders often finance up to 90 percent of their costs. Winners earn enough money to pay for the plane ticket that got them to the race and not much else.

So, given that he’s not racing full time, Dean figures it’s the perfect time to try to break the 100 mph barrier that stands untouched.

Dancing into her second century

Catching up with Chris Ito