Laying down Buckeye Roots in China 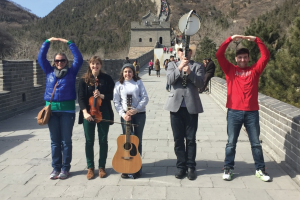 I got lost. It’s hard to admit because there were only two turns to get where I was going, and I got there eventually. But on the way back to my hotel at Wuhan University in China, I took a route that seemed familiar but instead found myself next to a bioengineering building I’d never seen before.

The random Chinese student I asked for help left behind his friend and his original purpose to walk with me half a mile to make sure I was put on the right path.

That’s the China I take home with me after nine days there: One of kindness, respect, friendliness and openness.

I made my first trip ever to Beijing during spring break for a four-city jaunt with a mostly student Ohio State performance group focused on Appalachian music, flatfooting and clogging (I was one of the cloggers). Buckeye Roots Strings and Steps was going for nine days as part of a U.S. Department of State grant to build cultural affinity with the Chinese and help set the stage for potential new partnerships between Ohio State and some Chinese universities.

One need only look around Ohio State’s campus to see why it’s important: More than 3,500 Chinese students call OSU their school. The more the university community understands Chinese culture and mannerisms, the more welcoming a place it can be for this vital international student segment.

An immediate takeaway from my trip: Performance art is a great way to transcend cultural differences. I — and frankly everyone in our little band of three musicians and two dancers — had no idea if the Chinese would appreciate folk music and our blend of traditional and modern clogging.

We were the second group of performers Bob Eckhart, the director of Wuhan University-Ohio State University Center for American Culture and the combined ESL programs in the College of Education and Human Ecology, had brought to China. The OSU Jazz Orchestra, a quartet of modern dancers, the OSU Beatbox Club and a one-man Muhammad Ali act comprised the first group. A third group of fraternity step dancers took the trip earlier this month.

We needn’t have worried. The Chinese had been exposed to Irish step dancing via Lord of the Dance, but clogging, which they called ti ta (kick step) was a new commodity. So was the banjo that education and public policy graduate student Joshua Coy played — the Chinese had never seen one.

We had performances at five Chinese universities in Wuhan, Suzhou and Shanghai as well as shows at popular arts district 798 in Beijing and the U.S. Embassy. Our journey began, though, with an impromptu performance at the Great Wall.

With seven shows in nine days, our program didn’t leave much time for sightseeing. But Bob wasn’t going to let us miss out on one of the great wonders of the world, and it was an excellent photo opportunity.

As our small band of musicians played, Department of Dance doctoral student Janet Schroeder and I began freestyle clogging in our tennis shoes. On stone. On a slope. But the tourists, mostly Chinese visiting from other parts of the country, loved it, and it’s a moment I’ll never forget.

I had attended a Chinese cultural workshop at Ohio State prior to the trip, and the Chinese student panelists mentioned how they tend to gravitate to other Chinese instead of pushing to make friends outside of their circle: one part shyness; one part maintaining a comfort zone.

But that’s in our country. The first rule of thumb when you travel the world is to leave all your assumptions behind, and in this case, I’m glad I did.

We played, sang and danced for more than 2,000 people, who oohed and aahed at the fancy footwork and the finesse of juniors Carrie Miller on fiddle and Liberty Brigner on guitar. Their rapt attention and thunderous applause was humbling. Their eagerness to jump up from their seats to learn some basic clogging steps from Janet was inspiring. To say the students were enthusiastic about our show was an understatement, and they rushed on stage after each performance to take selfies with us and share their experience across Chinese social media.

Every new stop felt like a warm embrace because when we weren’t performing, we were interacting with the students, who relished practicing their English-speaking skills (it’s required learning at Chinese universities) with native speakers. In turn, we learned some Chinese and had an immersive introduction into their culture.

At Huazhang Agricultural University in Wuhan, a potential new Ohio State partner, the students showcased their music, a traditional tea ceremony, the intricacies of Chinese calligraphy and a demonstration of Peking opera, with its extraordinarily high falsetto. Another college brought its full orchestra together for the first time as a welcome. It was a pleasure to see how much pride the Chinese take in their artistry.

It wasn’t until later in the trip, though, that I truly understood the pride the Chinese have for their country.

Lu Zi Han is a resource management freshman at Wuhan University and she is quite concerned about China’s air and water quality issues. The tap water must be boiled if you want to drink it. And the smog is causing serious illnesses. The air was so thick in Beijing one day, buildings three blocks away were obscured from view and the sun was a hazy disc.

But Han is full of hope. She wants to study abroad and return with the knowledge and skills to help fix the environmental damage. That’s the conversation we had while sharing a repast of spicy duck necks during an after-show reception at the Wuhan-OSU Center for American Culture.

Han, just like her compatriots studying at Ohio State, are China’s future, and they are craving to express themselves in ways — either individually or as tools in a movement — that previous generations were not always able to.

Jennifer Tarlin, the director of the Center for American Culture at the University of Shanghai for Science and Technology, who hosted our final performance, said that gets to the heart of why it’s important to share American culture with the Chinese.

“When directors of the Chinese-American centers have events like this, we have two things in mind. We want to expose our students to the best of American culture so they have the opportunity to gain that better understanding of what America is all about,” she said. “The openness with which Americans talk about ideas and talk about their government and talk about issues that might be deemed very sensitive in China is something that interests students here and they relish that opportunity to be very candid. But we also want Americans to come here and learn about China and to take back a message about just what a vibrant community there is here and how valuable it is to do this kind of traveling.”

Consider it delivered. China is much more than the governmental tussling that Americans see in the media, and the students showed us during our trip that they appreciate, and want to share in, the idea of what global citizenry is all about.

Adam King is managing editor in Ohio State’s Office of University Communications. He has been clogging and performing for more than 30 years, and he currently leads the 45-member Yellow Rose Cloggers of Ohio dance troupe in New Albany, Hilliard and Pataskala.

Defining issue of our time

A toe-tapping tour of China

From clogging on the Great Wall to rapping in Beijing, ESL Executive Director Bob Eckhart writes about the importance of Ohio State's continued cultural exchange with China on Buckeye Voices.