Buckeye Leadership Fellows take on real-world problems. FCC Chair Tom Wheeler, for one, is glad they do. 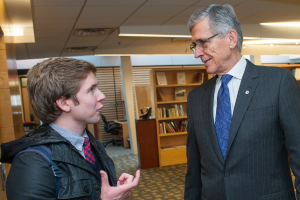 Tom Wheeler made a promise to Ohio State students when he came to campus to deliver his first policy speech as FCC chair. “The door is open at the FCC,” he said.

Eddie Pauline, director of the Office of Student Life’s Buckeye Leadership Fellows program, knocked right away. He had 20 seniors ready to tackle a leadership challenge as part of the rigorous two-year program that trains students to apply critical thinking skills to real-world problems. Did the Federal Communications Commission have a problem?

Did it ever. The FCC needed to build a database of schools with access to fiber-optic cable, an infrastructure that delivers high-speed Internet, but it was having trouble getting information. If the Buckeyes wanted a challenge, here it was: fill critical gaps in the database. This would help the agency to make funding decisions about where to put fiber in the ground.

In November 2014, senior Ruth DeGuire and 19 teammates got to work. They did extensive research, created a website to educate people about fiber and developed a survey for schools and vendors to report on fiber connectivity.

Unfortunately, the survey response was less than two percent, so the students regrouped. “We had to narrow the definition of success,” DeGuire said. The team chose to focus on three states sorely lacking data: New Mexico, Texas and Massachusetts.

Although discouragement set in, they hadn’t trained for two years for nothing. The students kept at it and finally located a “Golden Ticket Individual.”

“We were able to identify that one person who had all the information we wanted,” DeGuire said. “It was that idea of a Willy Wonka Golden Ticket Individual, where we asked him, and he said ‘Yes, I have that information,’ and he gave it to us.”

That individual worked for the Ohio Department of Education and had data for Ohio schools. But Ohio wasn’t even one of the targeted states. It didn’t matter, the team realized. This person had connections, including his counterpart in Texas, who agreed to help. As for the other states, it would be a matter of identifying the right person to ask.

In March, the team was ready to present its findings. Four students, including DeGuire, traveled to Washington to meet with the FCC.

Wheeler was impressed by the team’s perseverance.

“The students started down a path, and they realized it wasn’t going to work. That is the most important lesson in life,” he said. “No idea survives first contact. They zigged. They modified their approach. They followed through and didn’t get discouraged. In my experience, that is what everything is about.”

Wheeler was among the alumni who helped launch the Buckeye Leadership Fellows program in 2010, Pauline said. Since then, teams have completed 26 challenges for businesses, nonprofits and other agencies. 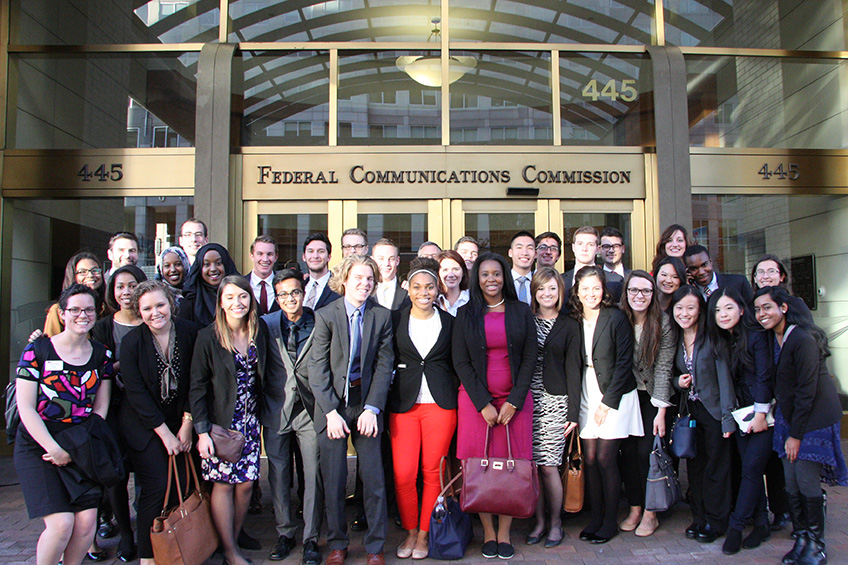 Buckeye Leadership Fellows don’t receive pay or academic credit, but they gain valuable experience and contacts, DeGuire said, noting other alumni also have stepped up to help them.

“I realized just how powerful, big and engaged the Ohio State alumni network is,” she said.

DeGuire is now in the network herself. She graduated in May with a food science and technology degree. She landed a job with Kraft Heinz, a position she’s plenty ready for, thanks in part to the Buckeye Leadership Fellows program.

How to get involved

If you are interested in working with the Buckeye Leadership Fellows Program as a workshop facilitator, leadership challenge host, speaker, mentor or donor, contact Eddie Pauline at pauline.2@osu.edu. Learn more about the program at blf.osu.edu.