A tale of hope

Author Linda Kass found inspiration in the World War II experiences of her mother and other heroes.

Author Linda Kass holds a photo of her parents, Aurelia and Ernest Stern. Her mother's upbringing in eastern Poland during World War II was her inspiration for the novel Tasa's Song.

Life’s intersections often lead us to rewarding paths, and that certainly is true for Linda Kass ’78 MA, author of a new novel that borrows from her family history and pays forward in a musical way.

Tasa’s Song, published in May by She Writes Press, chronicles the experiences of Tasa Rosinksi, a young Jewish violinist growing up in eastern Poland during World War II. The early life of Kass’ mother inspired the novel, which earned a bronze medal for historical fiction in the 2016 Independent Publisher Book Awards.

A former journalist, Kass attended a book reading a decade ago by Ohio State’s Lee Martin, College of Arts and Sciences Distinguished Professor of English. That meeting led to Kass taking several of his creative nonfiction and fiction workshops, which eventually led to the writing of Tasa’s Song.

As her story was nearing completion, she sought out longtime friend and violinist Charles Wetherbee of the acclaimed Carpe Diem String Quartet for a musician’s eyes on her manuscript. That path led to another “Tasa’s Song,” this one a musical composition Wetherbee wrote to complement the book.

Some excerpts from our recent conversation with Kass:

You have a master’s in journalism from Ohio State, but there’s also a university tie to your recent writing endeavors. Tell us about that.

Yes, several Columbus area book clubs came together for a program featuring Lee Martin, an Ohio State distinguished professor of English. He was a Pulitzer finalist for a book that I adored, The Bright Forever, in 2006. I talked to him about my interest in creative nonfiction after the program, and he suggested that I audit his graduate creative nonfiction workshop, which I did. I loved it. And then I took his upper-level undergraduate workshop. From him, I learned the tools I needed to develop a private family memoir that I wanted to give my parents for their 60th wedding anniversary. I continued to take several of Lee’s workshops, including one on fiction writing. He really helped me transition from a journalist to a novelist. He also put me in touch with a wonderful writing scholar, a writing coach, and I worked with her on short stories and developing my craft.

How did you arrive at the idea for Tasa’s Song?

In 2011, my husband and I visited our daughter during her college semester abroad in Berlin. We took a side trip to Krakow, my first time in Poland, the country where my mother grew up. And when I got back, I could not get the story of my mother’s early life out of my mind. I knew her story so well because, when I was a young child, she talked to me about all kinds of things — about growing up, her childhood, her village, the extended family. She told me she was the only one of her classmates who survived. It was a fascinating story also because she was from eastern Poland, which was under Soviet rule for the first two years of World War II, until Germany attacked the Soviet Union in 1941.

I was interested in telling how her story represented so many people’s stories. But it was a different story because they lived in eastern Poland, and they had a different experience. If you consider the people who died, the Polish Jews who died, it was a huge number. And maybe 50,000 to 70,000 survived. So in a way, her life was exceptional. She was a survivor. And so, the storyteller in me wanted to tell this story. It’s really important that we remember our history.

How did you take the leap into this project?

I was in the middle of writing other things, and I couldn’t really get my attention back to what I was working on. And I discussed it with my coach, and she said, “If you have this idea in your head, put some kind of a rough outline together.” I really didn’t know that I was going to write a novel. I just started it and by the third chapter, I thought, “You know, I think I could actually get this to happen." So, I just took it chapter by chapter, one at a time.

Right. I had been hearing this story and certainly having images in my own mind about this life she had. All the gaps that I didn’t know — that’s where my imagination sort of took off. And my basic question really was a more universal question. It wasn’t about telling the story of my mother, which is why I went to fiction. It was really asking the question, “How does anyone survive this?” I’d always had a question about how someone gets beyond loss and fear and displacement that happens in war.

Why did you make music such a huge force in the novel?

I think music is very healing. It expresses many, many emotions, and the violin in particular is a very expressive instrument. I don’t play the violin, but my mother did, although she was not a prodigy like Tasa. I used music to try to enhance and express the story and Tasa’s feelings at certain times.

How did the partnership with the Carpe Diem String Quartet come about?

Violinist Charles Wetherbee and I go way back. I met him through the Columbus Symphony, where he was the concert master. He founded Carpe Diem in 2005. So I approached Chas seeking technical advice, to make sure a violinist reading the book wouldn’t find anything wrong. He read the book, and he gave me some corrections. And then he said he had talked with other members of the quartet and their board and they were supportive of a synergistic program of words and music — merging my readings from Tasa’s Song alongside their playing of the music of the Eastern European masters mentioned in those scenes. And he asked, “So, is there a song?” And I said, “No. The title Tasa’s Song just refers to Tasa’s story. And he said, “I would love to compose ‘Tasa’s Song.’ Could I do that?” I had chills.

Was it like someone composed a song for you personally?

No. This was a historic, tragic time period that so many people experienced in so many ways, many of whom didn’t survive. I look at the book not as my story and not as my mom’s story; it’s a story that’s representative of survivors of this brutality. So the song is that way, too. The song is really a song for all of them.

You joined with Carpe Diem for a book reading and concert. Tell us about that and any future plans.

Carpe Diem’s last concert hadn’t been decided yet, so we came together for three programs in May at McConnell Arts Center in Worthington [Ohio]. The response was wonderful. When you can reach someone with a piece of art, and in this case two art forms working together, it’s just very, very satisfying. It’s hard to explain how all of us felt. This was their 10th anniversary season, and I was honored to be a participant in their season finale concert weekend. We’d like to do one more in Columbus sometime in December and also maybe other places during the next year.

A resident of Bexley, Ohio, Linda Kass is a former trustee of the Columbus Symphony Orchestra and a past member of the Bexley Board of Education. She also is a member of Ohio State’s Board of Trustees and a longtime rider in the Pelotonia bike tour, which raises funds for cancer research at Ohio State. Learn more about Tasa’s Song on her website or contact her on Twitter or Facebook.

An excerpt from Tasa's Song 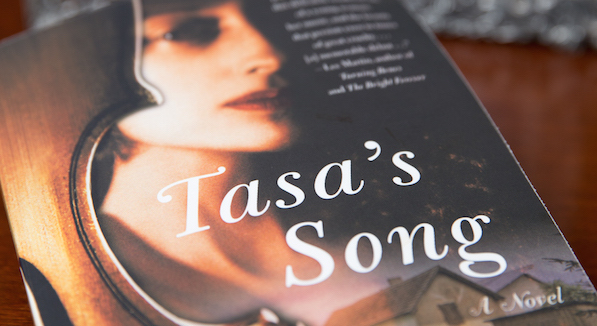 After Professor Vetrov was finished questioning her and his oversized figure disappeared around the corner, Tasa realized all she wanted to do was practice her violin. The lunch period nearly over, she opened her bag, took out the rugelach she’d brought from Frau’s latest batch, and bit into it, relishing the tartness of the raspberry in her mouth as she headed down the hall toward the music room.