Along with his Olympic gold, Buckeye wrestler Kyle Snyder packs a sterling reputation.

Editor's note: On Aug. 21, Ohio State wrestler Kyle Snyder capped an incredible year of competition, winning a gold medal in the Olympics to go along with the NCAA championship and World Championship he won already. With his victory, Snyder became the youngest Olympic wrestling champion in U.S. history, as well as Ohio State's first Olympic wrestling gold medalist in 92 years. Read more about his road to Rio in this story from the July-August edition of Ohio State Alumni magazine.

He was considered, pound-for-pound, the best high school wrestler in the nation. And as the No. 1 recruit, he had every college option available — including how he announced his choice.

No news conference with reporters or recruiting gurus.

Instead, Snyder called Ohio State wrestling coach Tom Ryan, and he did it at 9 a.m. New Year’s Day 2013, in the middle of his junior season at Our Lady of Good Counsel High School in Olney, Maryland.

“He said, ‘Coach Ryan, I want to start your New Year’s off right: I’ve decided to attend The Ohio State University,’” Ryan said. “So that was pretty cool. And since he’s been here, that type of thinking has manifested itself in a number of different ways.”

Snyder’s character and dedication to his sport and Ohio State shine through in big reveals and daily routines.

As a wrestler, Snyder had an epic year in 2015–16, winning a World Championship, an NCAA Championship and qualifying for the U.S. Olympic freestyle team. He’ll compete in August in Rio de Janeiro at 97 kg (213 pounds).

His accomplishments in his sport may have started accruing the day he first stepped onto a wrestling mat at age 5. But, they’ve certainly reached amazing heights since he became a Buckeye.

“I took visits to all the schools I was seriously considering,” Snyder said, explaining how he made his college choice. “While I was at Ohio State, I was able to meet some of the guys on the team and wrestle with some of the [Team USA Regional Training Center] athletes. Ohio State presented the partners I needed to push me to my maximum potential as an athlete.”

And while Snyder knew that joining the Buckeyes would go a long way toward helping him achieve his own goals, he also saw that Ohio State was building something.

“I thought we would have a lot of success as a team while I was there,” Snyder said. “The coaches supported my NCAA and Olympic aspirations and have done everything possible to allow me to reach my goals.”

In just two years, Snyder has become one of the most accomplished wrestlers in the history of Ohio State’s program. He won a World Championship last year at age 19, making him the youngest U.S. wrestler ever to accomplish the feat. And he’s the first active Buckeye to make an Olympic wrestling team. Along with his titles, Buckeye wrestler Snyder packs a sterling reputation for trip to the Games. 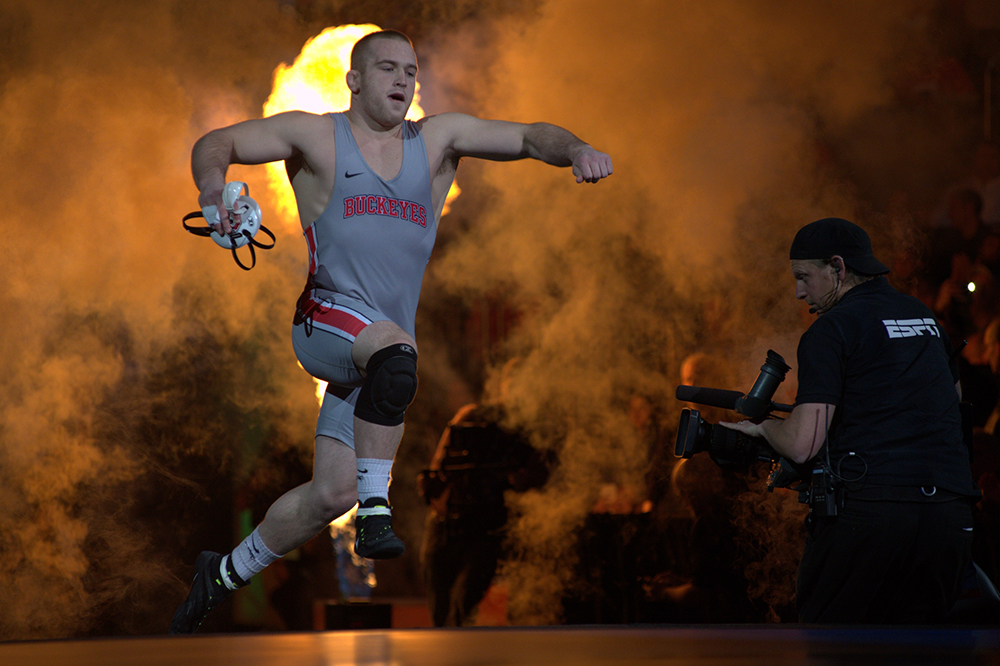 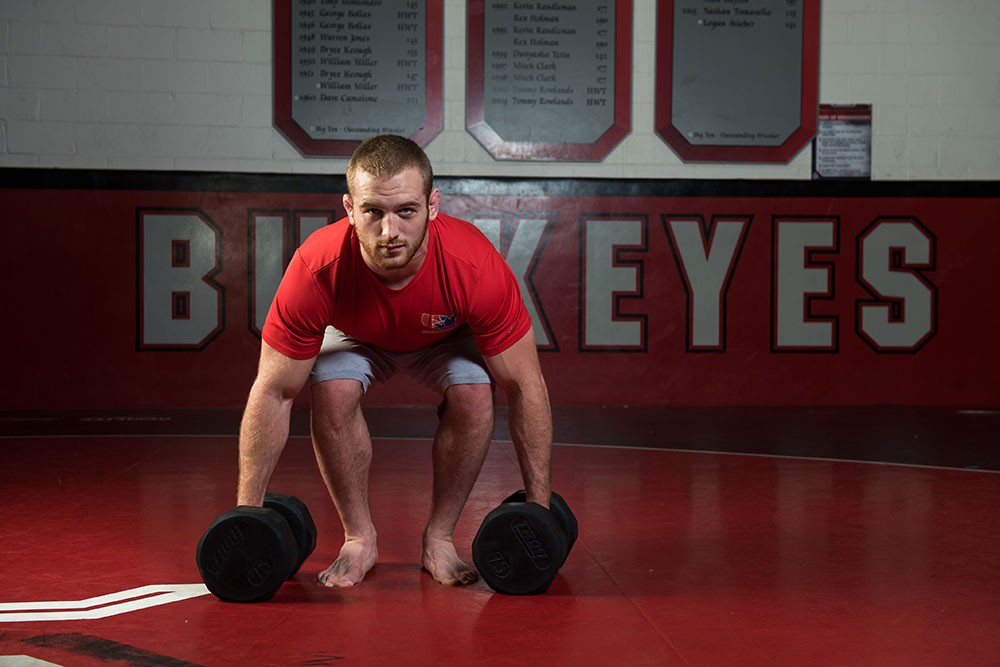 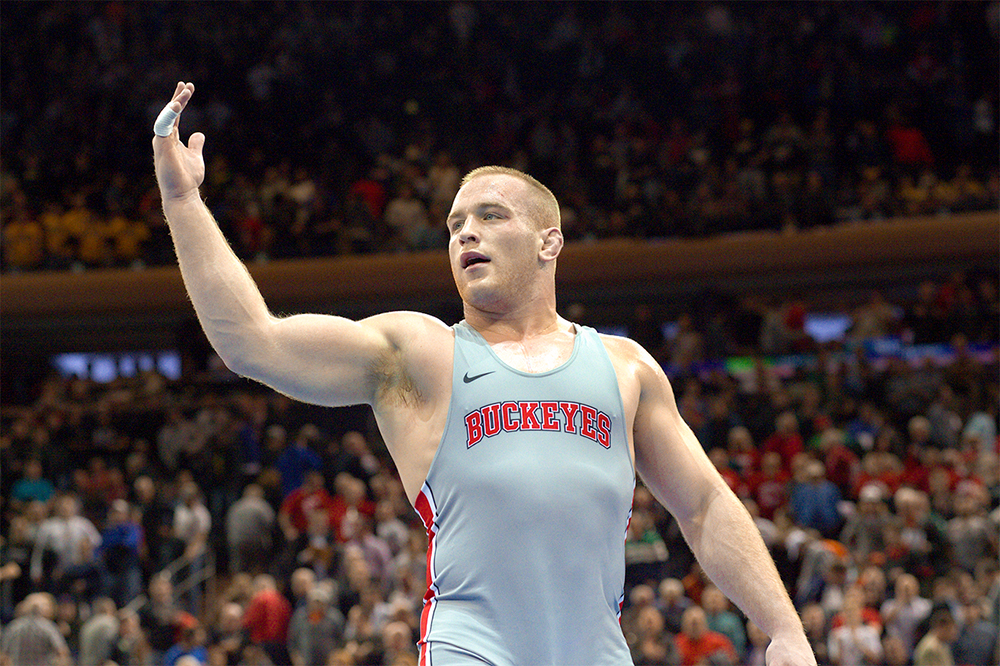 “It’s incredible for our program from a recruiting standpoint,” Ryan said. “The other thing it brings is tremendous leadership. [For] so many teams, their student-athletes wonder what it looks like to be elite. Our guys have walking, breathing, living proof of what elite does to get from good to great to elite. He brings a lot to the table.”

Including character. While his Twitter account alone offers many examples of his participating in fundraisers, thanking fans and supporting his teammates, his character also manifests when few are watching.

“We were at the NCAAs this year, and at the end of the tournament Kyle was voted the Outstanding Wrestler,” Ryan said. “A worker from Madison Square Garden came up to me and said, ‘Y’know, I’ve been working here the entire weekend and he’s the only kid in the tournament to thank me for filling up the water jugs.’ Who in the midst of trying to win a championship is focused on the simple things people are doing? This guy is that guy.”

He’s been plenty successful in the classroom, too. As a sports industry major, Snyder was an Academic All-Big Ten selection with a 3.88 GPA. It also doesn’t hurt that he meshes perfectly with a team built on good chemistry and strong foundations.

“This doesn’t happen by chance,” Ryan said. “He has impeccable character. You try to poke holes in this guy’s boat and there just aren’t any.

“This is a kid who was raised in a loving home. His oldest brother is a West Point graduate, now serving our country. His youngest brother chose to come to Ohio State as well. The family values and the things his parents put an emphasis on — it wasn’t winning, it wasn’t blowing his head up or building him up too much. It was, ‘Let’s focus on the things in life that really matter,’ and the end result is a Kyle Snyder.”

How are we attacking on other fronts?

Summoning the will within

Advancing on a dream
Ohio State senior Eleanor Harvey achieved a decade-long dream when she qualified for the Canadian Olympic team.

A boatload of support
Blake Haxton has overcome the odds at every turn. Now he is turning his focus to Olympic gold.

Follow our athletes
Keep tabs on how all Buckeye athletes are performing in Rio.