FloAnn and John Easton support causes close to their hearts. 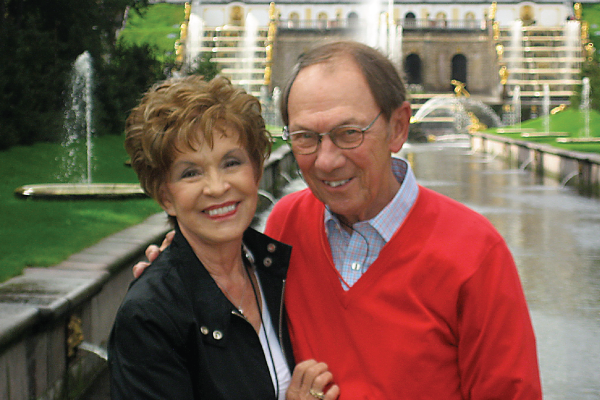 They grew up in Ohio. After high school, they both continued their educations within a few miles of each other in Indiana. Each of them returned to the Buckeye state to pursue additional studies at Ohio State. And that’s when FloAnn and John Easton met during the early ’60s — at the Dempsey Dumpster at University Arms apartments, where they lived across the street from one another.

FloAnn grew up in Bellefontaine. Her mother, who had always wanted to be a nurse, was thrilled when her daughter graduated from a three-year nursing school in Indiana and became a registered nurse. FloAnn moved to Columbus, worked as a pediatric nurse and enrolled in Ohio State’s College of Nursing to complete the bachelor’s degree she had always wanted.

John grew up in Ashtabula. After earning a bachelor’s degree in engineering from Purdue, he went to work for General Electric. Yet, believing entrepreneurship was his true calling, he pursued a master’s in business administration at Ohio State. He later founded Sensotec, a company that makes sensors, primarily for industrial and aerospace applications.

The Eastons are generous supporters of a number of programs and projects at their alma mater, especially in the colleges of Engineering and Nursing — including ventures in which those two colleges worked together.

With a donation from Sensotec and other gifts, the College Engineering established the C. John Easton Professorship in Engineering to support entrepreneurial leadership. John also contributed to the college’s capstone program, which provides academic and intellectual experiences for seniors.

“This professorship is helping us with the recruitment of a nationally renowned pediatric/adolescent nurse expert and researcher who will bring the most cutting-edge knowledge and skills to our students so that they can take the best evidence-based care of infants, children and teens,” Melnyk said.

The Eastons also helped to develop the College of Nursing’s Neonatal, Pediatrics and OB-GYN Simulation Laboratory, which provides computerized simulation of an intensive-care environment.

“There continue to be approximately 500,000 premature babies born in the United States every year,” Melnyk said. “Our state-of-the-art simulation laboratory is critical for developing high-level knowledge and skill in our nursing students so that they are much more prepared to deal with challenging real-work situations.”

Some excerpts from a recent conversation with the Eastons:

FloAnn, did your grandson’s premature birth influence your support of the Sim Lab in the College of Nursing?

I worked in a pediatric facility where there were a lot of very sick babies. That definitely had an influence on me, as did my grandson, Grayson. He was born seven weeks early and weighed about five pounds. Although Grayson was full size, he was not fully developed and had respiratory problems. He needed a lot of care and spent at least six weeks in the hospital. Although he needed a few years to catch up, he is now a healthy 10-year-old — and he looks like a football player.

What do you think of the college today?

I am so pleased with what’s going on in the College of Nursing. The college is something we all can be proud of with its quality education, special programs and exceptional students. John and I provide scholarships to encourage more nursing students to seek doctorates.

John, you went back to Ohio State to earn an MBA after you worked for a while. Did you find a graduate degree helped your career?

For me, it’s important to be a part of the workforce before pursuing a graduate degree. I worked at General Electric, which gave me a great background. Although I knew that engineering would be a good career, I discovered that sales, management and entrepreneurship were more to my liking. I wanted to do my own thing that was focused on a product based from my technical education.

Fisher College of Business has such an excellent, accomplished faculty. There was unbelievable bonding between mentors/professors and students. That’s what a top-notch university is all about — working and interacting with someone who can be a mentor. My mentor was the late Art Cullman. When I was building my business, he took the time to serve on my board, which allowed me the counsel of a renowned professor during the formative stage of my career.

You’re a proponent of collaboration, including a capstone project that has engineering and nursing students working together.

A lot of serendipity can be generated from multi-discipline interaction and the sharing of ideas. I don’t think it was as common during my college days. Today, you see a lot of intra-college cooperation. My business involves engineering, and we hired many Ohio State engineering graduates. FloAnn, of course, inspired my interest in medicine. The collaboration between nursing and engineering was natural.

Under a physician’s supervision, students developed a smartphone application that helps identify child safety hazards in the home and offers tips on ways to child proof. The project has been a home run. Nursing and engineering students discovered the benefit of working together to build a child safety phone app, which was selected by Nationwide Insurance for its Super Bowl ad. I figured even if the project didn’t get off the ground, the students would have a chance to meet. The nursing/engineering combination worked for FloAnn and me — and we’ve now been married for nearly 53 years.