Off the grid in Belize 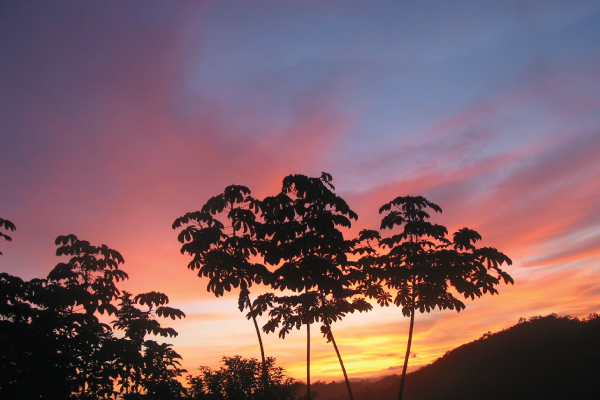 “Belize? Where’s that?” That was a common question I heard when we were preparing to move here in the early 2000s. I usually pulled out the little map I carried around and reminded the person inquiring that Belize was formerly known as British Honduras.

Belize gained independence in 1981. But there is still a strong British influence here in spelling (ie., colour instead of color), pronunciation, form of government and money. (The Queen’s picture appears on paper bills, and the 25-cent piece is a shilling).

We’ve seen many changes since we first came. For example, there were very few vehicles in 2000, but now there are so many that the government has built several roundabouts to control traffic. Many roads in towns are now paved. Mom and pop stores have been replaced with big grocery stores, owned mostly by Chinese immigrants, and all sell the same merchandise. With six of them in a one-mile stretch outside San Ignacio, I wonder how they all make money. One thing has not changed: There are no franchises.

My biggest adjustment has probably been the weather. An avid skier and winter lover, I had to adjust to “perpetual” summer. For me, the best weather here is November through March when it’s not so hot and humid. It’s hard to dust the oak furniture we brought from the U.S. when it feels clammy. Speaking of wood: I chose mahogany for the doors, woodwork and cabinetry in our concrete/plastered house, but what a surprise to see samples of at least 30 kinds of hard wood. Mahogany, known for its durability, is actually one of the softest woods in Belize.

Living in the jungle (or “bush” as Belizeans call it) has a few distinct disadvantages, but many more subtle advantages. Having lived in suburbia most of my life, I had to adjust to driving on a very bumpy, unpaved road that is muddy in the rainy season and extremely dusty in the dry season. Another drawback: fighting leaf cutter ants that destroyed three rows of okra in the garden in one night and now seem to love our guava trees. It’s a constant battle tracking the critters to their holes and destroying them.

Pulling the plug on utility bills

A big advantage is no monthly utility bills. We are off the grid. My husband developed our infrastructure: solar power and a water pump/filtration system. We collect rainwater off our roof in two 600-gallon tanks, and it is filtered and pumped into the house. We also have an 11,000-gallon cistern with gravity feed for the dry season. Propane/butane gas is delivered periodically to fill our 80-gallon tank to operate the stove and dryer. It is much cheaper to live here. We don’t need heating, of course, and airflow is accomplished naturally with a cupola and windows on each side, 8-foot walls and 11-foot ceilings. The cupola over the center of the house has a 16-foot ceiling.

Our windows are almost never closed — only during a driving rain — so we are much more aware of the outdoors than we were in the U.S. We hear howler monkeys and many species of birds. I love to watch the colorful hummingbirds getting nectar from the Hamelia patens bush outside my office window. One of my favorite birds, the melodious black bird, is nothing to look at, but what a sound he makes! On the other hand, the very colorful keel-billed toucan sounds like a frog with a cold. Noisy parrots, which fly around in huge flocks during the summer months, are a perfect alarm clock. That is, if 6 a.m. is your waking time.

Chachalacas are my least favorite. They are huge and loud. Instead of keeping together in a flock, they seem to separate — some on our hill and others on a distant hill — and they sound as though they are in great discussion about where to meet. I don’t like brown jays either. I was eagerly looking forward to our first pineapple as it matured in the garden. The jays also kept a watch on it, and soon there was nothing left to harvest. Many species of butterflies also are common. Sometimes when I take the garbage out to the compost pit, as many as six bright blue morphs fly out.

The adjustment to new fruits, vegetables and edible native plants has been easy. I consider them culinary adventures. We buy the produce that we don’t grow ourselves, either at the open-air market or directly from the farmers. One day, my husband bought what I thought was a beautiful bouquet of flowers for me. But no, it was a bunch of fleur de sote, an edible flower that tastes like cabbage when cooked. Edible leaves abound; I make tea from peppermint, lemon grass, “cow foot” leaves and tres puntas, which is extremely bitter but good for cleaning the liver and killing intestinal parasites.

We eat moringa leaves, a rich source of protein, vitamins A and C and potassium, either cooked or raw, on almost everything. Chaya leaves, which look very much like maple leaves, are a spinach substitute but much richer in vitamin A. And the leaves of the allspice tree wrapped around fish before baking give it great flavor.

Unfortunately, my attempt to bake cashews was a disaster. I knew they had to be baked, as they are toxic when raw. What I didn’t know is that Belizeans “throw them into the fire” outside, where they do a lot of their cooking. I put them in the oven. When I opened the oven door, a wave of hot air hit my face, neck and arms and resulted in a very painful rash. That was the end of cashew processing for me!

Peanuts and cacao beans are a different matter. Both are abundant in Belize. Although peanuts are dried in the sun by local farmers, they are still raw. I like to buy several pounds and bake them as we eat them. Cacao beans are much easier to peel after they’ve been baked. I chop them in the blender, making “nibs,” and use these bits of pure chocolate (and antioxidants!) in baked goods, coffee and ice cream topping. Growing cacao is a thriving business in Belize, and the beans bring a premium price for flavor and organic production. In 2013, a chocolate bar produced from Belizean cacao won first place in international competition.

I always thought that bananas were, well, bananas. Wrong! We have seven varieties of bananas growing on our land alone. People call them by their names, much like apples in the U.S. There are 77 varieties of mangoes. Hass were the only kind of avocados I knew before moving to Belize. Now, we enjoy huge pear-shaped, buttery ones and other varieties that grow on our own trees.

The specialties of Belize

Rice and beans and corn tortillas are the traditional staple of Belizeans. It is now common, at least in restaurants, to have stewed chicken and potato salad or cole slaw added to rice and beans; it’s called the national dish. There’s an area along the road coming out of San Ignacio town that we call “BBQ Row.” Vendors barbecue chicken out in the open, and it’s almost impossible to drive by without stopping to eat. Rather than compete with each other every day, they stagger the days they are open.

Panela, evaporated cane sugar juice sold in blocks, was a delightful discovery. It is a natural sweetener with all the nutrients intact. Children eat bits of it for candy. Unlike the genetically modified beet sugar in the U.S., the cane sugar produced in Belize is in its raw form.

So, you may ask, how does a master’s degree in math fit into jungle living? After retirement, it’s gratifying to help high schoolers with their math and see big smiles on their faces when they get a good grade. And the blessing of conducting vacation Bible school in a village with no electricity, and where youngsters are taught to respect adults, lasts a long time.

Dottie Pavkov Feucht ’60 MA spent her career in telecommunications. Her husband, Dennis, an electronics engineer, moved to Belize in 2003, and she joined him full time in 2006.