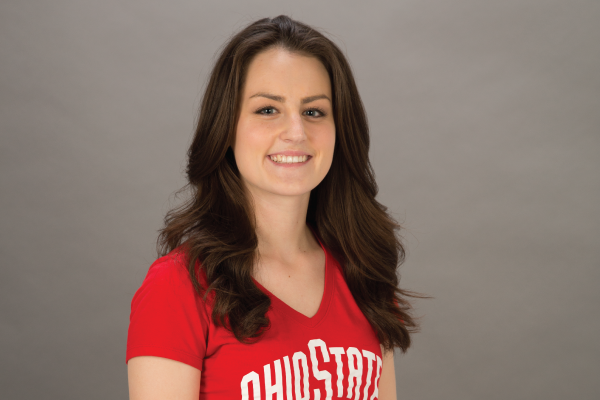 This time, her mom was right.

Taylor Fitzgerald thought she had her college choice nailed down. After years of listening to a neighbor talk up Penn State, she was ready to depart for State College to study engineering.

That is, until her mom suggested they go to a college fair at her local high school. She wanted to stop by and visit their neighbor’s booth and thank him for encouraging Taylor.

As it turned out, they also met Mary Margaret Thomas, who was dressed in scarlet and gray and had a positive and infectious attitude.

“My mom noticed Mary first,” said Taylor, of Clifton Park, New York, about a half hour from Albany. “We were immediately drawn to her booth. She was so enthusiastic and told me all about Ohio State.”

Thomas told Taylor about her wonderful professors and her experiences with the university debate team, theater and radio. A native of Toledo, Thomas said that, although her father insisted she visit every Big Ten school before making a decision, she knew Ohio State was her choice right away.

After she earned a bachelor’s degree in education in 1956, Thomas’ career took her from teaching and developing speech and hearing programs for public schools to a job as a juvenile parole officer. She also worked for major insurance companies and now is a part-time caregiver for a global homecare agency.

“Thanks to my education at Ohio State, I’ve had the joy of serving and leading various organizations,” Thomas said. “I am proud to share information and my Buckeye pride with area high school students.”

Jumping on the opportunity

Even though Taylor had finished her college applications by the time she crossed paths with Thomas, she went home and applied to Ohio State that night. She was excited to learn that her area alumni club — the New York Capital Region Buckeyes, for which Thomas serves as president — was preparing to award its first scholarship.

“We are pleased Taylor is our first recipient. Her answers on the scholarship application conveyed her interest and a picture of her accomplishments in and out of school,” Thomas said. “When we interviewed the applicants, Taylor’s personality absolutely popped. She was poised, confident and genuine — everything we wanted in a student to receive our first award.”

Advocating for her university

Last year, Thomas represented Ohio State at three area college fairs and dropped off materials to nearly 40 high schools. Applications from students in the region rose from 45 in 2013 to 58 last year, and the number of enrolled students increased from four to 11.

Thanks to Thomas’ leadership, Buckeye pride and alumni involvement are up in the region, too.

After moving from Florida a few years ago, Thomas sought out local alumni clubs to meet fellow Buckeyes. But she found activities and participation were low. Since she’d served successfully as president of the Southwest Florida Alumni Club, she knew she could turn things around.

Thomas worked to combine alumni clubs from neighboring areas to form the New York Capital Region Buckeyes. “Whenever I hear people say they are an alum or I see someone waving a Buckeye flag or wearing scarlet and gray attire, I talk about our club and invite them to join,” she said.

Getting off to a great start

Now with one semester completed, Taylor is feeling at home on campus. She’s majoring in chemical engineering and has known since middle school she’d follow her father into that field.

Taylor knows her future offers many options, but for now, she’s considering a focus on alternative fuels or cosmetics. Law school and a future as a patent attorney also may be in the cards.

“What has surprised me most about Ohio State so far is the amount of pride students and faculty have for the school,” she said.

Was her neighbor disappointed with her change in plans? “I think a little, but he said the most important thing was that I get a great education.”

It appears she has that covered.

On the right track