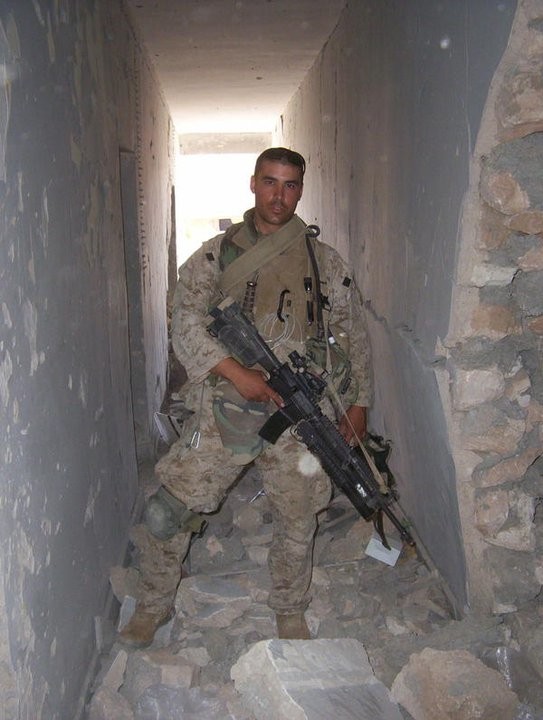 When the terrorist attacks of 9/11 happened, I was a sophomore at The Ohio State University. I had joined a Marine Corps Reserve infantry unit out of Columbus — Lima Company 3/25 — about a year earlier. Many of my fellow Marines at Lima also studied at Ohio State.

In the sense of a fraternity, we were our own Band of Brothers. With the War on Terror raging, we continued doing what we had become accustomed to: going to school every day, living our lives with the knowledge that we could be called up at any time. It was not much different from the reality that many of our student-veterans at Ohio State live with today.

During my last quarter, Lima Company received word that we would be leaving for Iraq soon. When finals week finally came around, we were on lockdown at the drill center. Our deployment date was so close that I had to request permission to attend graduation. On commencement day, I changed out of my uniform into a suit and met my family at St. John Arena.

As I sat among others in caps and gowns, a girl next to me began to make small talk. She asked what everyone was doing after graduation. She was headed to New York for a marketing internship. Another was joining an accounting firm. When they finally came to me, I wasn’t sure what to say. How do you tell someone that your first job out of college is a combat tour?

“I have a great opportunity overseas,” I said. They wanted to know where, so I followed with, “the Middle East.” They asked what I was going to do, and I tried to think of the closest thing to being a combat infantryman in the villages of Iraq. “Community relations” was what I came up with. As the questions continued, I took off my cap to expose my freshly shaven head and told them I was going to Iraq. It is a sobering moment that I’m sure has replayed itself many times with each student who has left for war during college.

Most of today’s more than 2,000 student-veterans at Ohio State have already been to war and are now using their education benefits to better their lives. For many of those who have never worn the uniform, that veteran in their life is the closest experience to war they will ever have to encounter. And for those of us who have worn the uniform, we like it that way, and that’s why we serve.

Although we may leave Ohio State, the scarlet and gray tradition follows us wherever we go. In Iraq, we would ride into battle with the American flag, the Ohio burgee and, you guessed it, an Ohio State Block O flag. On game days, one Marine would even wear Archie Griffin’s No. 45 jersey under his uniform for good luck. While we were on the front lines, Marines back at our headquarters would tell us the score over the radio. There is nothing like a piece of life from home to keep you motivated.

After I came home, I was fortunate to work for a great Buckeye, Congressman Patrick Tiberi, on Capitol Hill. I loved Ohio State so much that I returned to Columbus to attend Fisher College of Business for my MBA. After Gov. John Kasich was elected, I was given the incredible opportunity to join his administration as assistant director of the Ohio Department of Veterans Affairs Services.

The chance to impact the lives of my fellow veterans returning from Iraq and Afghanistan was more than enough for me to decide to put off going into the private sector after earning my MBA. I have been able to use the skills I learned at Fisher to support the governor’s initiatives that connect veterans with the jobs and benefits they have earned.

During this time, I have watched Ohio State grow tremendously in its efforts to ensure student-veterans have the services and support to not only finish their degrees, but to connect to opportunities after graduation.

Lima Company accomplished a lot in Iraq, but it came with a cost. When it was all over, 22 Marines and one Navy corpsman had made the ultimate sacrifice, and members of the unit had earned 59 Purple Hearts.

When we came home, we took the Block O flag that witnessed it all and gave it to Coach Tressel. He hung it above the door in the locker room, and on game day, each football player touched the flag as he made his way to the field. At the end of the season, Coach Tressel gave it to the father of the first Marine we lost in combat. It was a small token to represent the everyday greatness that all Buckeyes carry with them no matter where they are in the world, regardless of which field they may defend.

Grateful to witness an evolution