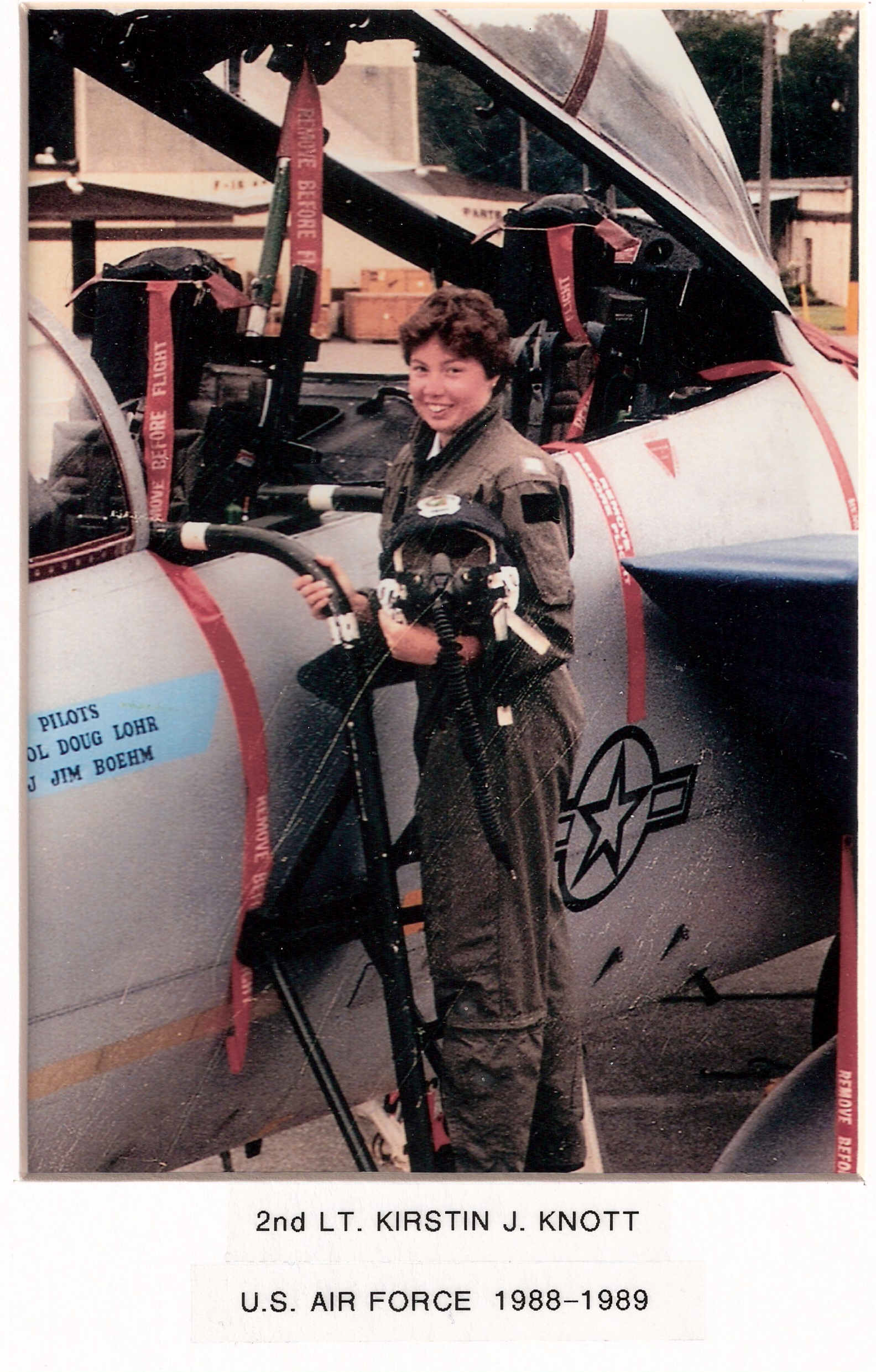 Kirstin Knott poses with a T38 trainer aircraft during her time as an Air Force ROTC cadet at Ohio State.

My first major was aeronautical engineering, as I thought you needed to know how to ‘‘build ’em to fly ’em.” I took flight lessons, soloed and earned my private pilot’s license at Don Scott Field. Midway into my sophomore year, engineering was proving to be more challenging than I expected.

I was awarded one of 12 pilot slots for women and changed my major to transportation and logistics to ensure I could graduate and be commissioned on time. The Air Force ROTC courses allowed me to develop leadership skills and values I have used throughout my career. The Air Force values of integrity first and excellence in all are centerpieces of my existence.

Almost a year after graduation, I reported to Reese Air Force Base in Lubbock, Texas. I was one of two female student pilots in my flight. For six months, I flew the T-37, a multi-engine trainer aircraft. I have about 90 hours of flight time. I loved flying, but found that I was slightly behind the jet; I “washed out” out of the program. The Air Force offered me the chance to become a navigator, a logistics officer or end my service. I was 23 years old, and my life’s dream had suddenly come to an end.

I moved to Silicon Valley, where I had family, and answered an ad for a part-time customer service agent for Federal Express. I accepted their offer. Eventually, I moved into a full-time sales position, and my flying became more as a passenger than as pilot in command.

While in San Jose, I became involved with the San Francisco Bay alumni club. As I’ve moved, I’ve subsequently joined the clubs in New Orleans, Chicago and Washington D.C. For the last 10 years, I’ve led the Department of Defense sales team for FedEx, travelling to Iraq, Afghanistan and bases throughout Europe and Asia. My military experience provides an insightful perspective to the transportation and logistics solutions we develop for the military.

I’ve stayed engaged with Ohio State as a mentor to the fellows participating in the John Glenn School of Public Affairs internship in D.C., focusing on students who have a tie to the military. Remembrance Park has bricks for my grandfather, who served in the Army Air Corps; my father, who was commissioned via OSU Navy ROTC; and me. I’m excited to hear about the opening of the Office of Military and Veterans Services. Converse Hall, ROTC and the Arnold Air Society were the focal points of my campus life.

As a cadet, I thought my career would be as a military pilot and officer. Yet I’ve found success serving the military in a different way. But for Ohio State and the Air Force, I would never have been able to reach for my dream nor recover from my biggest failure. I’ve learned that I can take risks and persevere.

Kirstin Knott was in Air Force ROTC throughout college and trained for six months at Reese Air Force Base in Lubbock, Texas, before choosing a different path.