The Ohio Statesiders, circa 1965, perform a song titled “The Telephone Hour” during a show they presented about the same time as their 10-week tour of Europe. 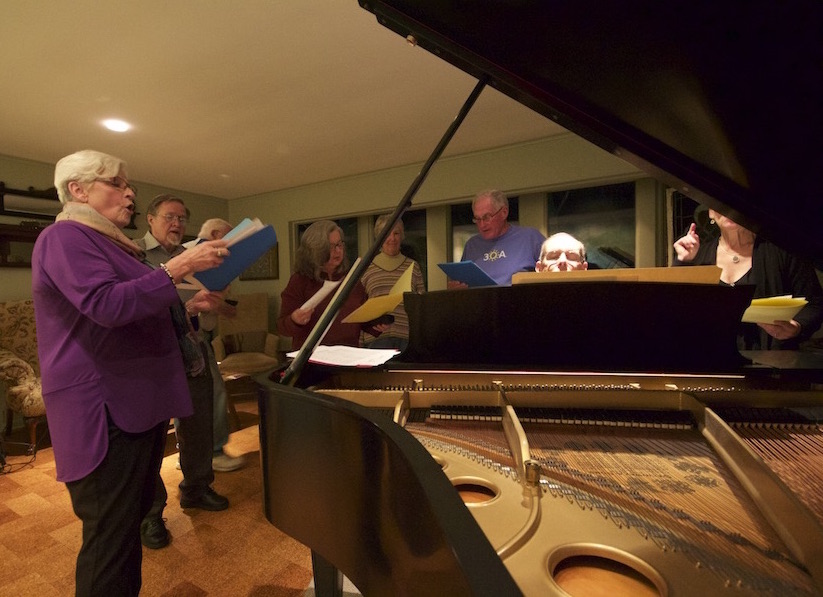 Members of the group, circa 2015, gather around the piano and their former director, Stephen Jacoby, to sing some of the tunes they performed 50 years ago. (Photo by Alex Conrath)

A lot of things have changed in the past 50 years, but the bonds connecting the Ohio Statesiders aren’t among them.

The Statesiders comprised seven male and seven female students selected from Ohio State’s Symphonic Choir to entertain U.S. service members in Germany and France in 1965. The opportunity, offered through the USO, led to a 10-week tour and a lifetime of memories.

Stephen Jacoby ’64, ’66 MA, ’85 PhD, then a graduate student, led the group as musical director. He also began organizing occasional reunions of the singers 10 years ago, with the most recent occurring in November.

“Will and I did duets,” recalled Ann McCann Chase ’66, her face brightening at the memory of her numbers with Will Venable ’65, ’67. She eventually moved to San Diego, where she taught and did “everything from opera to experimental music to cabaret.”

Venable, now retired, enjoyed a career as a teacher and school psychologist. But he said he’d choose music if he could do it all over again.

“I’ve found music is something you have to have if it’s a part of who you are,” he said. “I could feel that connection during my college years. When you’re in a situation, you tend to be critical of it. When I played our recording years later, I was impressed.”

Eve-Anne Yaw Wilkes ’68, ’74 MA, said the time abroad and opportunity to entertain soldiers opened her eyes to the world’s possibilities. As a music director at Napa Valley College in California, she’s helped her students follow a similar path.

The group gathered last fall at the home of Marsha Stewart Phillips ’65, ’73 MA. And true to style, it was Jacoby — now retired from Bluffton University, where he was a music professor for 40 years — who called everyone to gather around the piano.

Each singer grabbed a folder of familiar tunes and took a place around the former director as he warmed up the keys. The hour of song and laughter passed quickly, as the friends found their voices still blended despite the years.

Then: “Consider Yourself at Home”

And now: “I Wanna Go Back to Ohio State”

How to reconnect with your friends

Share your best wishes with Archie on social media using #ThanksArchie, or send an email to alumnimag@osu.edu with the subject line “Thanks Archie.”

1. The Ohio State University Alumni Association transitions from a dues-paying membership organization to one in which all graduates — currently more than 500,000 strong — are members.

2. The Bill and Susan Lhota Office of Career Management is created in 2012, helping alumni network, search for and post career opportunities and take part in professional development programs.

3. In 2014, the Office of Volunteer Relations debuts. In its first year, the office facilitates more than 800 volunteer matches and begins planning a national volunteer endeavor for 2016.

4. The association launches a scholarship fund in 2005 and works to see it grow to more than $1.1 million, providing several undergraduates each year with assistance based on academic performance and financial need.

5. Recognizing that engaged students become active alums, the association establishes a highly visible office in the Ohio Union, adds a student member to its board and encourages the growth of the Student-Alumni Council.

Join Buckeye Nation in honoring Archie's leadership as he prepares to serve Ohio State in a new role.