Ilhan Dahir is proud to be a Buckeye, an American and — now — a Rhodes Scholar.

It was an honor to be a finalist.

This is what Ilhan Dahir told herself as she left a reception with nearly a dozen other highly qualified women and men who, like her, were invited to Chicago to interview for just two of 32 Rhodes Scholarships given nationwide.

One of the oldest and best-known academic awards, the Rhodes Scholarship covers all expenses associated with two or three years of study at the University of Oxford. Rhodes Scholars are lauded for their intellect and potential as leaders on a world stage. Past winners have gone on to become American heads of state (including a president), members of Congress and the Supreme Court, poet laureates, media barons and professional athletes.

Dahir is no lightweight herself.

Despite those accomplishments and a dozen others, she was in awe of the other Rhodes candidates at the reception that Friday night. So, yes, Dahir would hold her head high and feel good that she had been a finalist.

At 11:20 the next morning, she took her seat at a round table. Facing her were six judges in varied fields of expertise. Five had been Rhodes Scholars themselves. Dahir took a deep breath and waited for the curve balls to come. But they never did.

Instead, she enjoyed an invigorating exchange about global issues, including those that matter most to her: refugee communities, forced migration, human rights and social justice. It was a pleasant experience that ended a mere 20 minutes later. She left them to deliberate her future.

That evening, Dahir and Ashley Orr, a senior at Youngstown State University, had reason to celebrate. So the two freshly minted Rhodes Scholars went to a Chicago diner. While happily munching on a terrible excuse for a quesadilla, Dahir talked about what the recognition would mean to her university and the Somali community back home. Best of all, for Dahir, was the chance to fulfill the prescient dream of her late grandmother, Axado.

“She told me that she specifically wanted me to go to Oxford,” Dahir says. “If she were here, I would expect her to be incredibly proud and happy.”

Osman’s mother couldn’t read and didn’t speak English. But she longed for him to attend Oxford one day. For her, it represented the very best — a gold standard in education promising intellectual riches and abundant opportunities for all those who studied there.

Osman didn’t make it to Oxford, but he did come to the United States in 1981 to earn a bachelor’s degree from Illinois State University. He returned to Somalia in 1986 to work for the government, and there he met his future wife, Lina Mohamed.

The young couple valued education, so much so that they parted temporarily to pursue studies half a world apart. Osman went to the University of Wisconsin–Milwaukee; Mohamed attended COMDA Augsburg in Germany.

“I left home two months before civil war broke out,” Mohamed says. “My program was two years long, and we thought we would go home after that. But there was nowhere for us to go back.”

Mohamed joined Osman in the United States before they moved to Toronto for work. In Canada, they welcomed their first two daughters, Ilhan and Nima. The parents worked hard at making sure the girls maintained ties to Somali culture, language and traditions. Ilhan didn’t learn to speak, read or write in English until kindergarten. She would come home every afternoon and share the lessons she learned with her little sister.

When the family moved to Columbus in 1998, they were among a wave of Somali immigrants attracted by the city’s low unemployment and ample stock of affordable housing. The American Immigration Council estimates more than 45,000 Somali Americans live in central Ohio, making the area home to the second-largest Somali population in the United States.

Osman is a social worker, and Mohamed is a librarian and teacher at a local charter school. They have a comfortable home on a suburban cul de sac, and their daughters — now numbering four — have attended quality schools and benefited from having grandparents and other relatives living just a few minutes away. 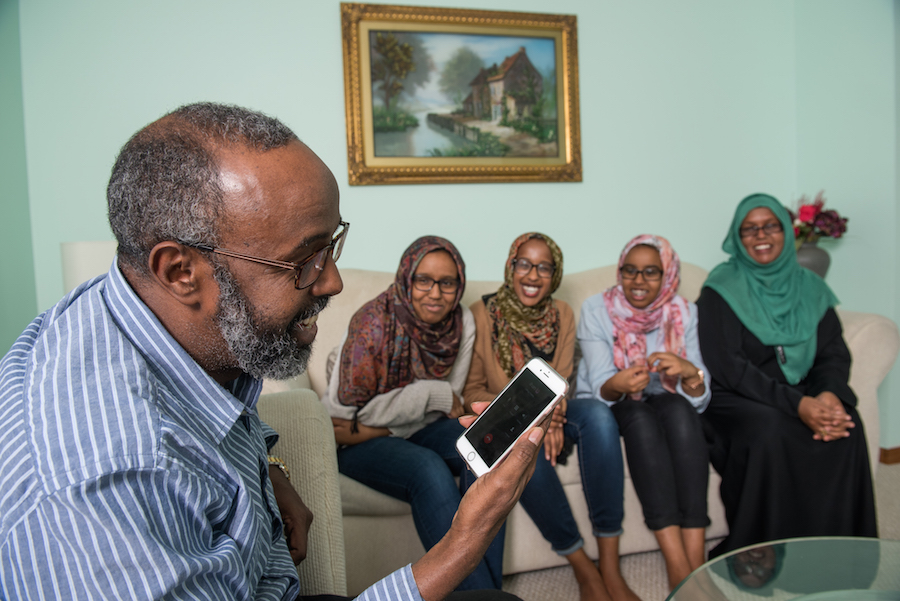 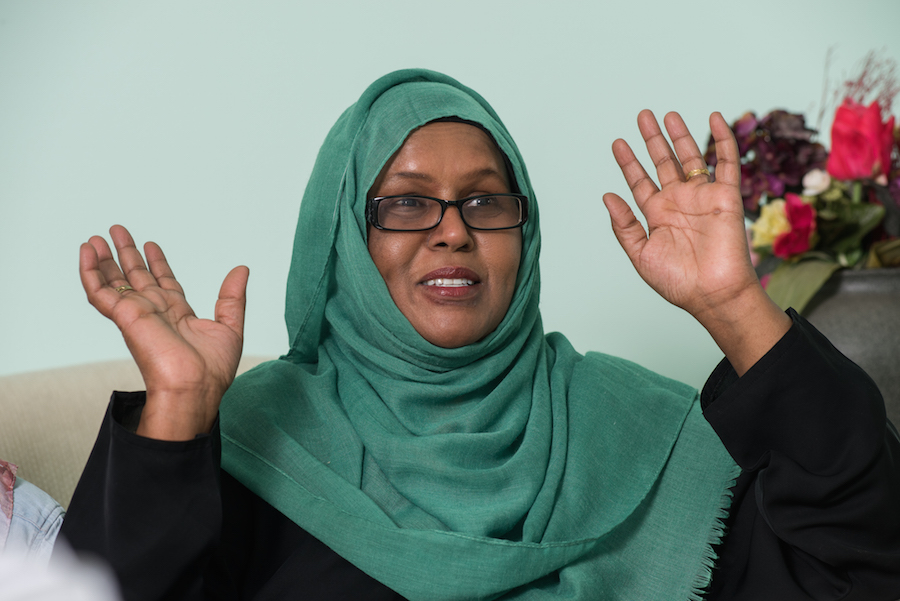 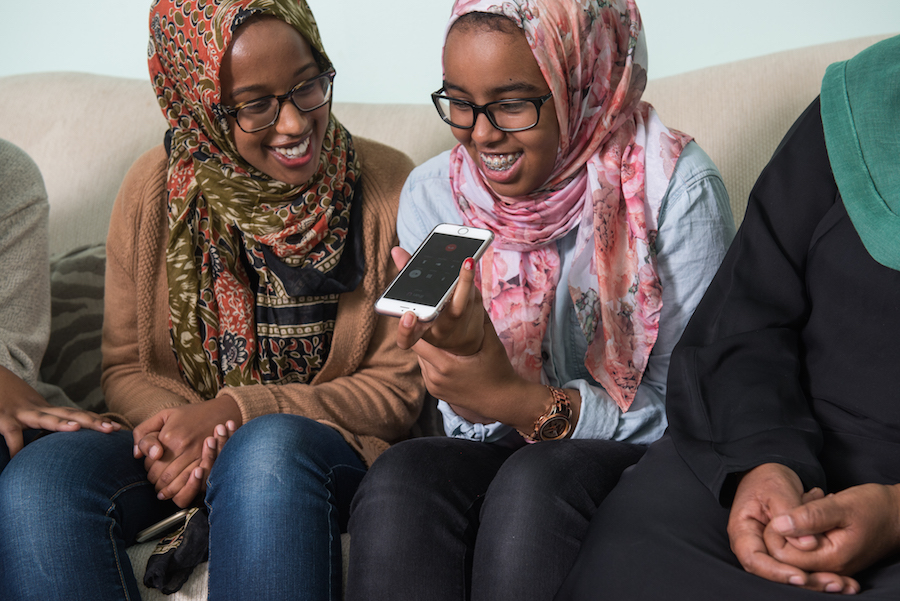 Osman and Mohamed feel incredibly fortunate to have left Somalia when they did. They have given their daughters a shot at reaching their potential away from an environment roiled with violence.


But being forced to leave your motherland means the choice wasn’t entirely yours. Even as they created a family and life away from Somalia, Osman and Mohamed never fully unpacked emotionally. They always intended to go home.

“You think, ‘One day, I’ll move back with my kids.’ Now we think, ‘We’ll retire there by ourselves,’” Osman says. “The kids came up through a totally different culture with different values. They still have that part of them that is Somalian, African and Islam. But they’re Americans first.”

Osman and Mohamed have been displaced, while their children have put down roots.

When Dahir made the decision to attend Ohio State, she had reservations. If your childhood is set against a scarlet and gray backdrop, it can feel like you’re not venturing far enough from home. The university was big, Dahir thought, and she wasn’t sure she would find a group of close friends.

“The decision to come here was one of the best I could have possibly made. Ohio State is exactly where I needed to be,” she says. “Four years is a very short amount of time, but I think you can push yourself to go deep here. There are so many small decisions I made and conversations that wouldn’t have been possible anywhere else.”

She found others interested in working at the same intersections of English, political science and law. At Ohio State, she discovered that she wanted to organize with others around wage inequality and prison reform. Dahir contributed to rigorous classroom discussions in honors courses with other high-achieving students and enthusiastic instructors.

“The honors students at Ohio State are tremendous,” says Randall Schweller, a professor of political science who taught Dahir’s contemporary foreign relations course. “They’re as good as any other students in the country, and she stood out among them.”

Later, he advised Dahir on her thesis examining the role of western foreign fighters in the Islamic State of Syria and the Levant’s threat to global peace. Her poster presentation of the project placed third in the university’s Denman Undergraduate Research Forum.

“She came up with very good reasons for why ISIS has been so successful in recruiting foreign fighters, and at the time people weren’t talking about it as much as we are now,” Schweller says. “She is a very serious kind of person. She is going to succeed in life because she’s just too demanding of her time not to.”

Outside the classroom, she refined her leadership skills as editor of The Algerian, the university’s student publication on political science and international relations; a Buckeye Leadership fellow; a group leader for the Buck-I-SERV service learning program; and marketing chair of the Muslim Student Association. 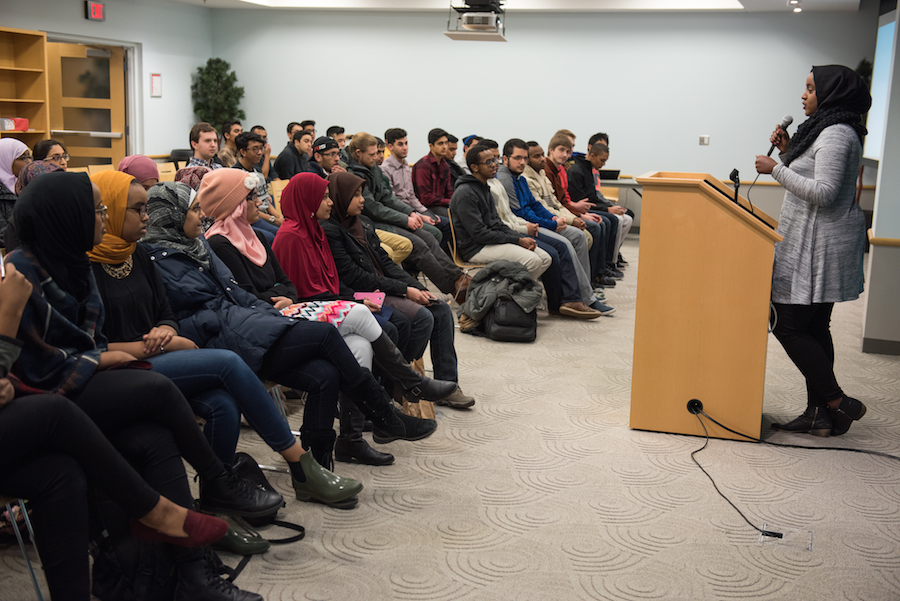 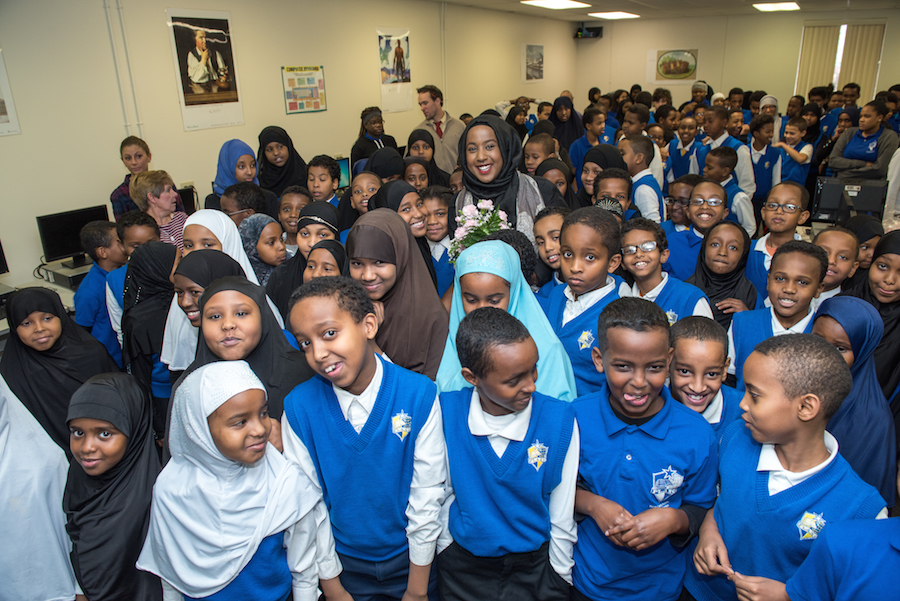 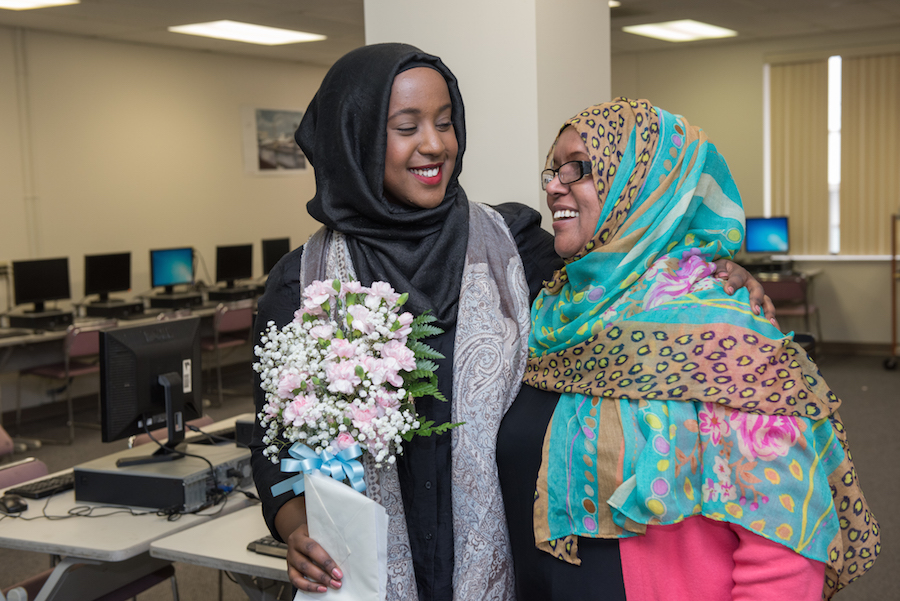 Dahir also remained committed to initiatives she started in high school, including serving as a tutor and mentor to younger Somali students. She raised money for scholarships and advocated for the immigrant community on a host of issues. In 2012, she was named a White House Champion of Change and spoke at the White House about her work with Somalis in central Ohio.

“I’ve always felt a huge amount of responsibility to my community insofar as we are identified both ethnically and racially as ‘other,’” Dahir says. “A lot of my personal growth and development have happened in opposition to the negative stereotypes people have about Muslim, Somali and immigrant communities. I felt like I was a liaison or an ambassador of sorts — to make room and let those stereotypes motivate me.”

Linn Van Woerkom, associate vice provost and director of University Honors & Scholars, says Dahir draws from her local experiences when thinking about global challenges. Ohio State, he says, was the perfect place for such a forward-thinker.

“Going to a top academic institution and being able to continue working with the Somali community was what she needed, and she could do that here,” he says. “The only way you have real impact is to have sustained effort, and that’s what she did here — and will continue to do.”

Dahir will arrive at Oxford in October to pursue master’s degrees in refugee and forced migration studies and global governance and diplomacy. She will explore theories and questions surrounding how and why people move across borders — from fleeing violence to escaping the effects of climate change — and what long-term solutions exist for preserving their human rights. It may lead her to law school and a career as an international human rights attorney.

“So much of the conversation surrounds the bare minimum of survival — food, water, shelter. If we expect more, we can do more,” she says. “The work isn’t just about the numbers — how many people can be resettled the best they can be. I think it’s also about individuals, and I’m eager to use any sort of knowledge I gain to affect people’s lives in a positive way.”

A look at Ohio State’s past Rhodes scholars.

While Ilhan Dahir’s resume is jaw-dropping with the breadth and richness of experiences she had as an undergraduate, she is among many outstanding students Ohio State has attracted and supported over the past decade as they work to realize their potential as agents of change.

A leader among friends

Ohio State senior Nima Dahir, Ilhan’s sister, writes about her pride in being a Buckeye, an American and a Muslim in a Buckeye Voices essay.