All was well with the world

Alumna recaps her happy days as an undergrad in the post-WWII era.

Editor’s note: Last year’s magazine feature on life in campus residence halls spurred Betty Hoopes Huffman, ’51, ’81 MA, of Marion, Ohio, to pen this reflection of her college days. A proud alumna, she also is the daughter, wife and mother of Ohio State graduates.

I lived in Mack Hall from 1947 to 1951. Before Woody Hayes. Before Title IX. Before campus barriers. (I was able to drive a car straight through campus on any street.) I coped with the invasion of the returning WWII veterans studying on the GI Bill. Why, I even had a student ticket for the football games on the 40-yard line, and if I wanted to, I could look south straight onto the intramural football practice fields through the open end of the Horseshoe. We have wonderful pictures of Script Ohio. Like a dummy, I sat through the whole blessed Snow Bowl, darned near getting frostbitten.

I was an only child who graduated with 18 others in my high school class. I wasn’t even 18 years old when I arrived at Ohio State. Suddenly I had two roommates, whom I had never heard of, and they shared my every space. We had a pretty special room, room 105, on the ground floor in the southwest corner of Mack Hall. We even had our own lavatory. One of my roommates complained bitterly because I brushed my teeth so loudly I woke her up in the morning. I had an 8 o’clock; she had a 10 o’clock.

All three of us needed help with college expenses. We received aid and were assigned a room in Mack Hall designated for students like us. Our rent was slightly reduced. Each of us was given a job in the Mack Hall Commons. My husband, Randall, and I met in the Commons during our first quarter. He had a meal ticket there. Randall and I often ate together with my two roommates and a congenial group of other veteran and nonveteran male students who had meal tickets. 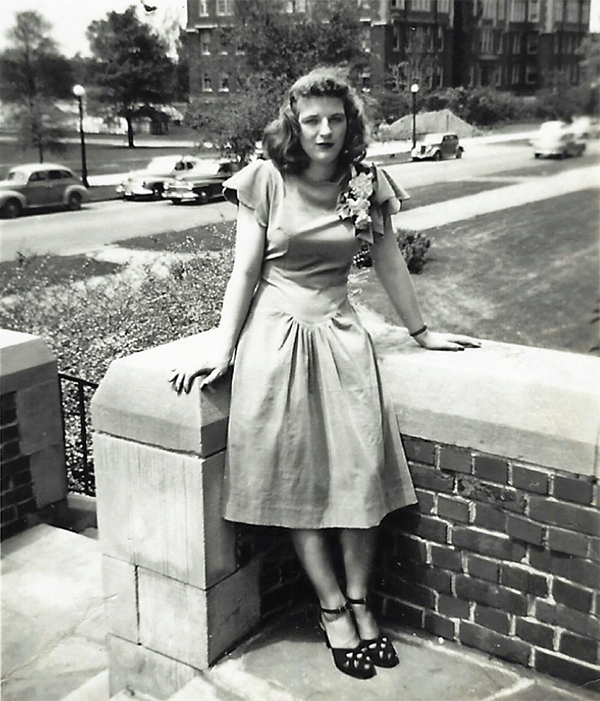 Betty Hoopes stands on the Mack Hall porch in 1949. 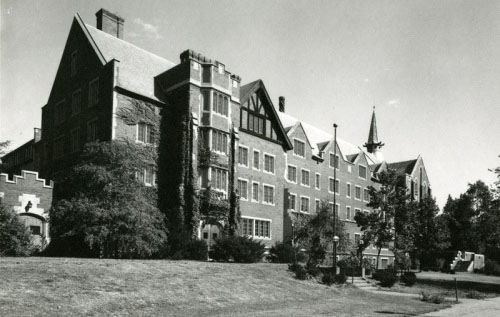 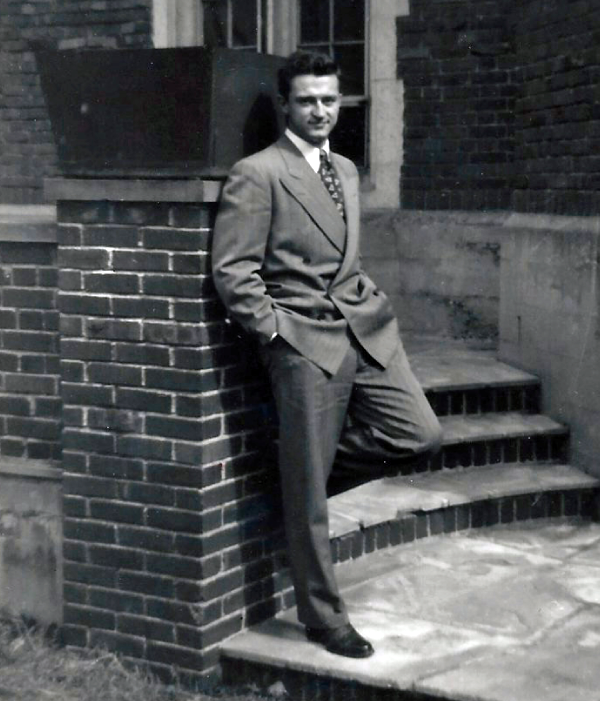 Randall pictured on the Mark Hall steps in 1949. 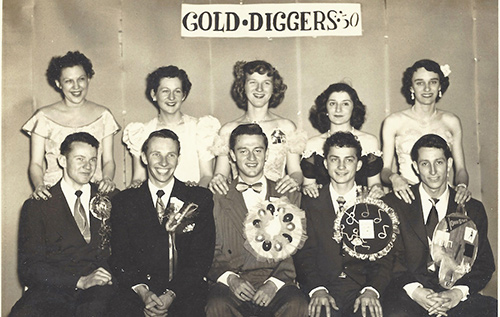 Betty Hoopes and Randall Huffman are the center couple in this photo from the 1950 Gold Diggers’ Prom. By this time, they were engaged. To the left of Randall is Hal Hugus, who was to have been Betty’s date for the 1947 dance. Instead, she had her first date with Randall, and they have been married for more than six decades.

Our first date, in 1947, was the Gold Diggers’ Prom, an annual campus formal [popular from the late 1930s to the ’60s] that offered a bit of role reversal: The girls served as hosts, buying the tickets and furnishing transportation and corsages for their dates (strange adornments we designed and fashioned ourselves). My date was supposed to have been a fellow named Hal, and the girl I was doubling with was taking Randall. She was driving. She decided she wanted to go with Hal. Her car, her choice. “Fine,” I said, “I’ll take Randall.” Not a bad move, as it turns out. We’ve been married for 64 years.

By the way, our old Commons is still there. We visited recently. I finally recognized the one roofline that covered our old table. The building has been expanded two or three times for more dining area now. The current director greeted us and explained how food services are handled today. For us, there was one buffet line of food at the north end of the Commons. That was it. And there were minimal choices on that buffet. I don’t remember much about the food. It was pretty good, I think. We had to dress properly for Sunday dinner, and we were never allowed to appear in the Commons with our hair in rollers, no matter which meal it was.

No men were typically allowed in our dorm rooms in Mack Hall, although there were regularly scheduled “open houses.” During these, we were allowed to entertain in our rooms, but we had to keep at least one foot on the floor. When coming to call, Randall would enter the southwest entrance, give his name to the person at the desk and ask her to call my room to let me know he was there. But we sometimes got around that. As he came down Eleventh Avenue, he just gave our secret whistle — a bobwhite quail call —and I met him at the dorm door. Or if, momentarily, no one was on desk, he went to the east wall of our formal visitors’ lounge and knocked on the wall that separated the lounge and our room and I came right out. Never got a wrong knock in all four years in that room.

After the evening meal, Randall and I walked the short distance north along Neil Avenue to the main library, where we studied together until the 10 p.m. closing time. There is nothing more romantic than walking down Neil on a warm fall night under starry skies. How could we not fall in love? I had to be signed in at Mack by 10:30 p.m. There was a nook or two on the dorm porch for goodnight kisses before the fatal minute. All was well with the world. The men were home from winning the war, Ohio State was winning Rose Bowls, Woody Hayes was in the immediate future and I was engaged to Randall and getting an “A” in biology.

And one more thing. Even in the absence of Title IX, there were women’s intramural sports. I was in charge of Mack’s women’s basketball team, and we had winning seasons. Best of all, I was picked from that team to play on Ohio State’s women’s traveling basketball team. Although the games were few and far between, I could not have been happier or prouder. I begged and begged for someone to just write a letter recognizing my accomplishment. I was told, “Betty, don’t worry about it. Just play to have a good time.” No question about it, I had a good time, but I wanted that recognition. And I kept wanting it. But I put it in the back of my mind. 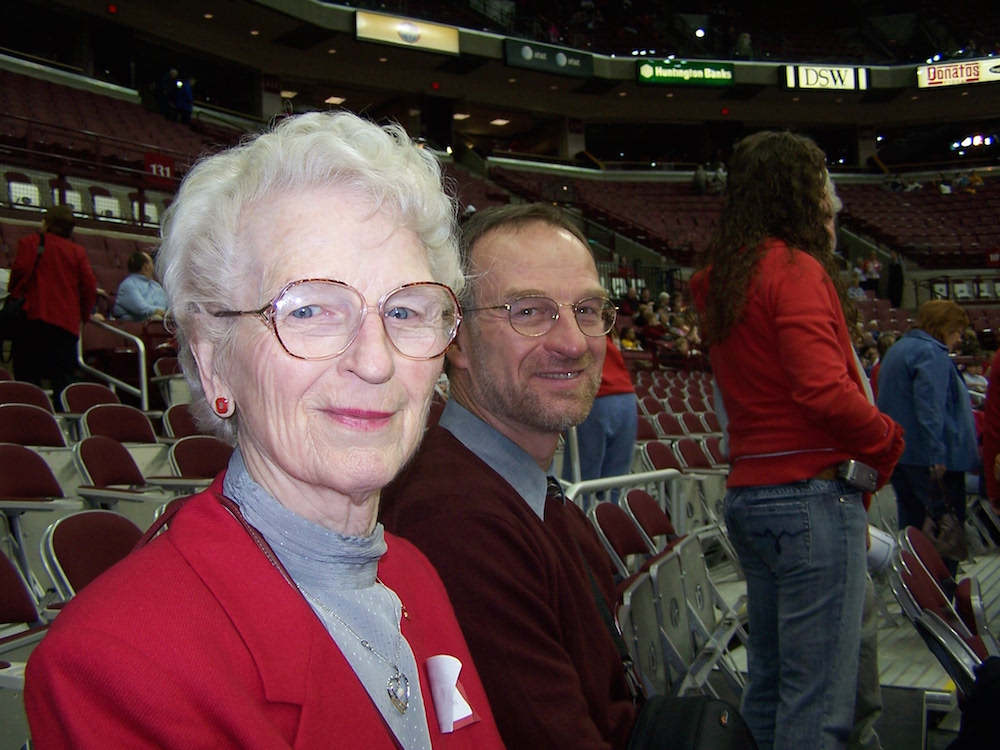 Betty, shown in the Schottenstein Center with her son, Mark, was recognized as a former player at an Ohio State women's basketball game in 2006.

In 2000, the Varsity “O” Women’s Alumnae Society made a tremendous effort to identify, locate and contact former women athletes who represented OSU in varsity sports like I had before Title IX. My husband, who was as proud of me and my basketball triumphs as I was, actually contacted the society for me. The society reached out to about 1,600 of us and invited us to a luncheon and women’s basketball game in 2006.

I was the oldest of the 167 former athletes who attended. I was asked to participate in a forum involving former players from various sports to tell those gathered how it was in “the old days.” Phyllis Bailey, the university’s first women’s basketball coach and a former student contemporary of mine, was the principal speaker. They labeled us as pioneers. That was a little much, but based on my history and through the effort of those wonderful women in the Alumnae Society, I was awarded my varsity pin and my varsity letter. Not just a written letter, but a real chenille scarlet and gray Block O, which I have framed and proudly display in my unofficial retirement office. My throat still gets a little tight as I write this and glance up at that framed varsity “O.”

Oh, yes, I finally left Mack Hall my last quarter. Randall and I were married, and my housemothers attended the wedding.

Rules were strict. My special housemother, Mrs. Leonard, lived across the hall from me and mothered me when I needed it, bless her old heart. Maybe the current hall residents would chafe at those rules. But the rules were fine with us. I didn’t give them a second thought. And, I wouldn’t trade my wonderful memories of life in the dorm (you call them residence halls) for a fortune.

Being a Buckeye means being himself

Helping others through their difficult season