Hunter Stieber grew up on a wrestling mat. He’s as comfortable there as most people are on a bike.

But for the better part of a year, from this past October to this coming one, Hunter will have had about a month on the mat. Total.

In fact, in the past two seasons, the two-time All-American has barely been able to compete: First, he took a redshirt his junior year. And this past season, he tore ligaments in both elbows.

Because he put off surgery, he managed to contribute to the Ohio State wrestling team’s winning its first-ever national championship in March. However, he missed out on one of his college goals — to win a national title with his brother Logan, who became the fourth NCAA wrestler ever to win four individual national titles.

But in both seasons, he also demonstrated who he is.

“Anything for the team, I’ll do,” Hunter said.

He took the redshirt year so he and Logan wouldn’t graduate after the same season, which would have meant the Buckeyes losing two of their best scorers at nationals.

This past season was an altogether different beast as Hunter suffered ulnar collateral ligament tears to both elbows.

“The redshirt year wasn’t too bad, [but] once it got to nationals, I really wanted to wrestle,” Stieber said. “This year was pretty awful.”

In mid-July during the Pan-Am Championships in Mexico City, he tore ligaments in his right elbow. The left elbow tears came on Jan. 11 against Penn State.

“My opponent hit a switch and it was pop, pop, pop,” Hunter said. “Everything I did, there was a lot of pain.”

He put off surgery in case he was needed. To stay in shape, he trained on a bike or moved around the mat wearing a weighted vest. It was a good thing, too, because his season wasn’t over. 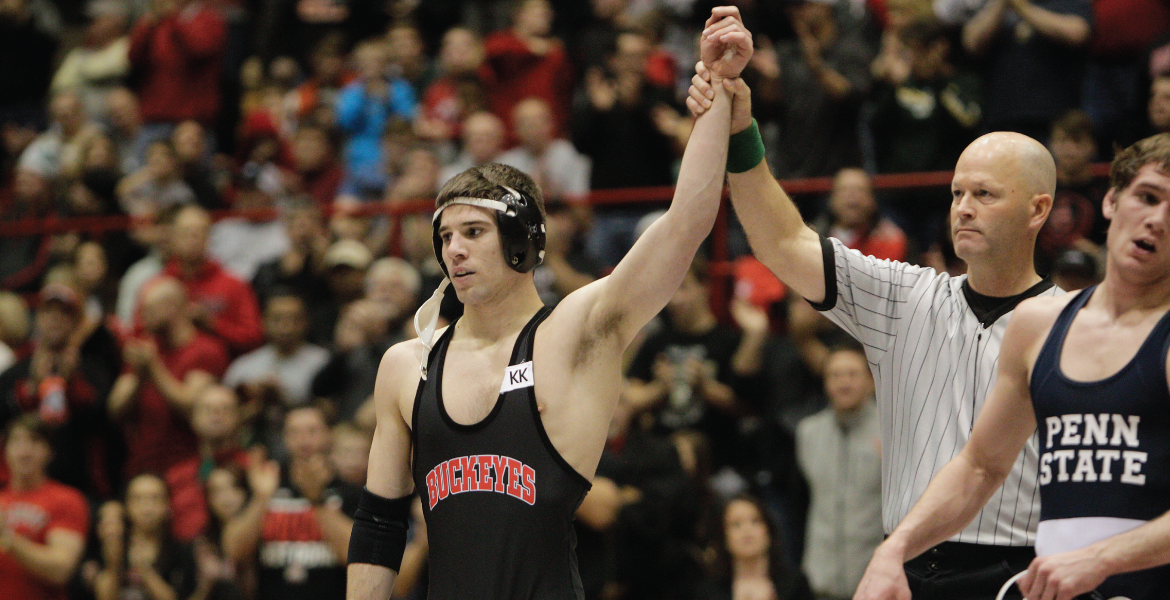 Hunter Stieber who was out most of this past season, defeated Penn State, the defending NCAA champions, in January.

Despite being practically immobilized, Hunter stepped up to wrestle in the Big Ten tournament because he offered the team its best chance to score points at 149 pounds and qualify for nationals.

He did both, finishing sixth.

“You could say his performance won us the Big Ten championship,” Coach Tom Ryan said. “I didn’t know how we’d do if Hunter couldn’t score points. He was the inspiration.” 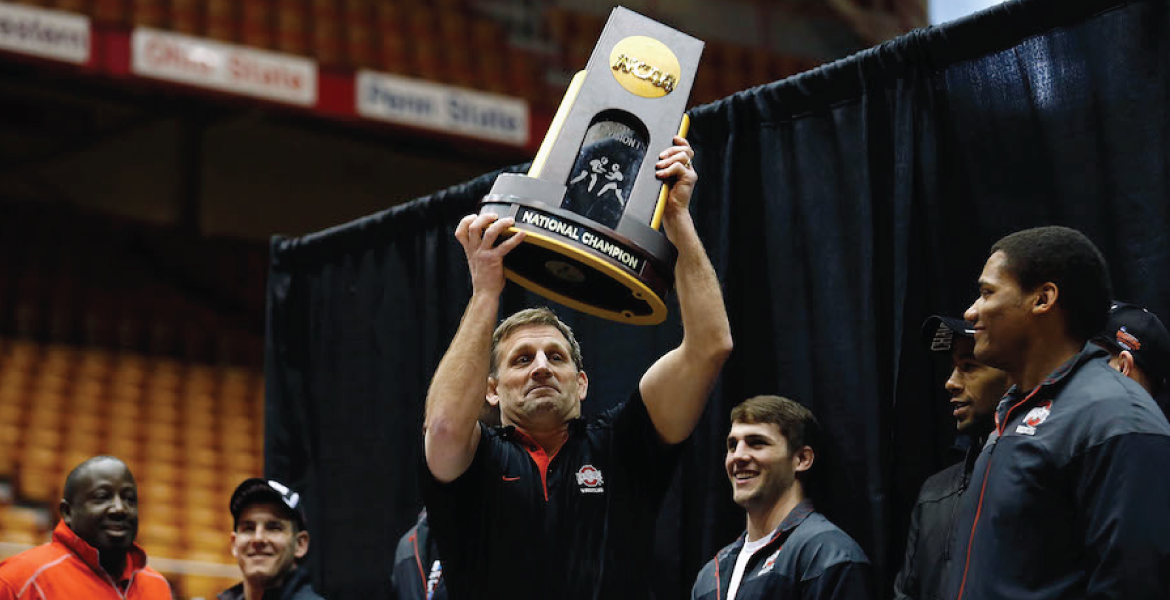 His trip to nationals, where he had reached the semifinals in two previous trips, ended when he defaulted during his second match.

Instead of walking quietly off the mat, Hunter left to a chorus of cheers as the Ohio State crowd gave him a standing ovation.

“He was a big inspiration,” Logan said. “This year we weren’t able to train together because of the elbows, but I’m excited to be able to help him next year going for the title.”

Following surgery after the season, Hunter was told he’d be fully back on the mat in six months, just in time for the 2015–16 season — his final one at Ohio State.

“It’s been pretty cool, to have me and Logan come in and be pillars of the program, always going to nationals, scoring points for the team,” Hunter said. “But the most important thing is we’re always working hard, always in there training. People see that, and we get a lot of recruits who have the same philosophy.

“It’s pretty cool, a couple of little kids coming out of Monroeville helping lead a team to a national title.”