National championship celebrations continued in late April as the Ohio State Buckeyes traveled to the White House to visit with President Barack Obama. Here are 10 scenes from the trip. ​

Supporters were on the scene when the national championship Ohio State football team visited the White House and President Barack Obama in late April. So, too, were Jerry Emig, associate director of sports Information, and Kevin Fitzsimons, university photographer, whose work is showcased here. 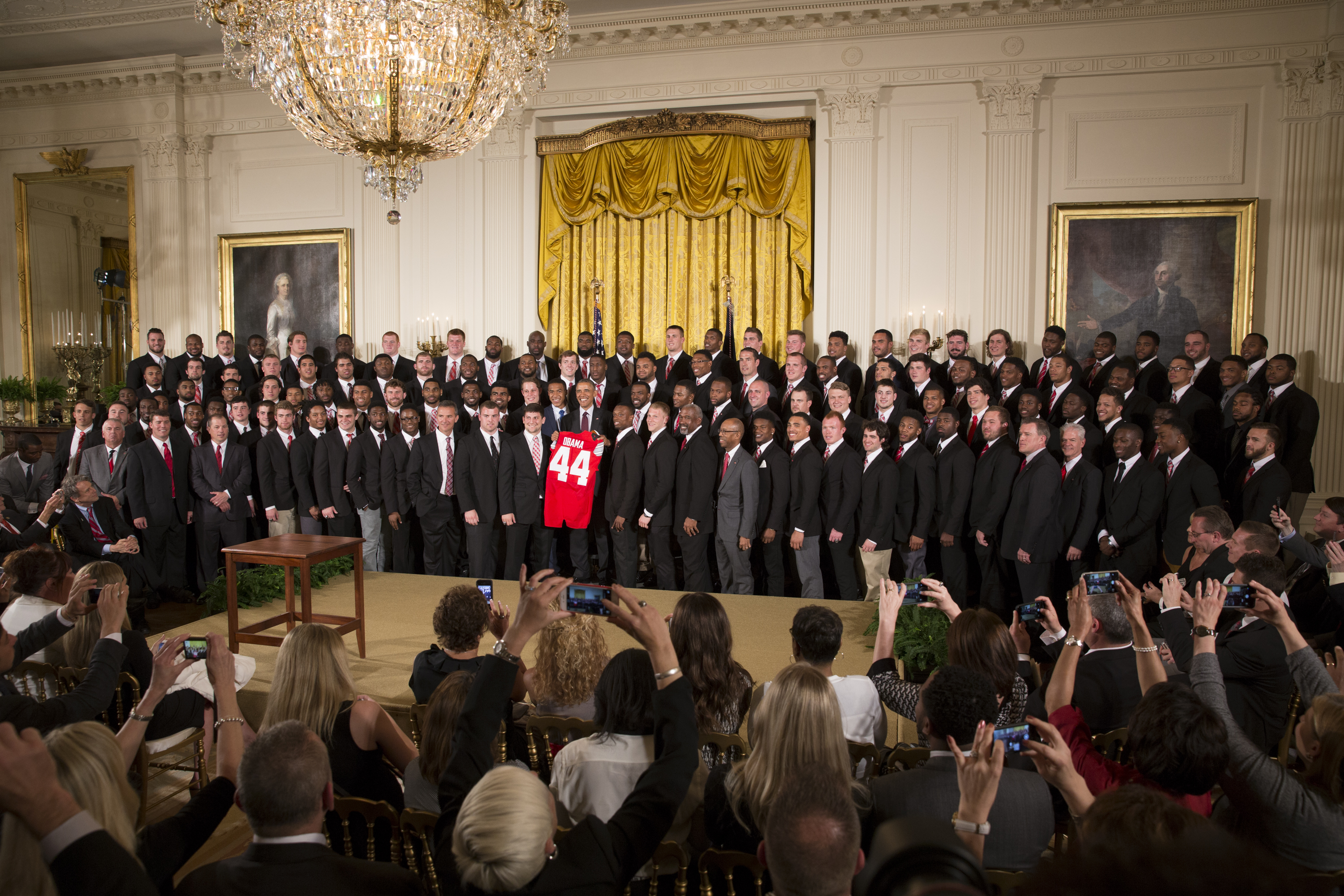 The team started off at the Martin Luther King Jr. Memorial, the theme of which draws from a line of King’s “I Have a Dream” speech: “Out of a mountain of despair, a stone of hope.” The players passed through the pieces of granite that symbolize the “mountain of despair” on their way to the memorial’s Stone of Hope. 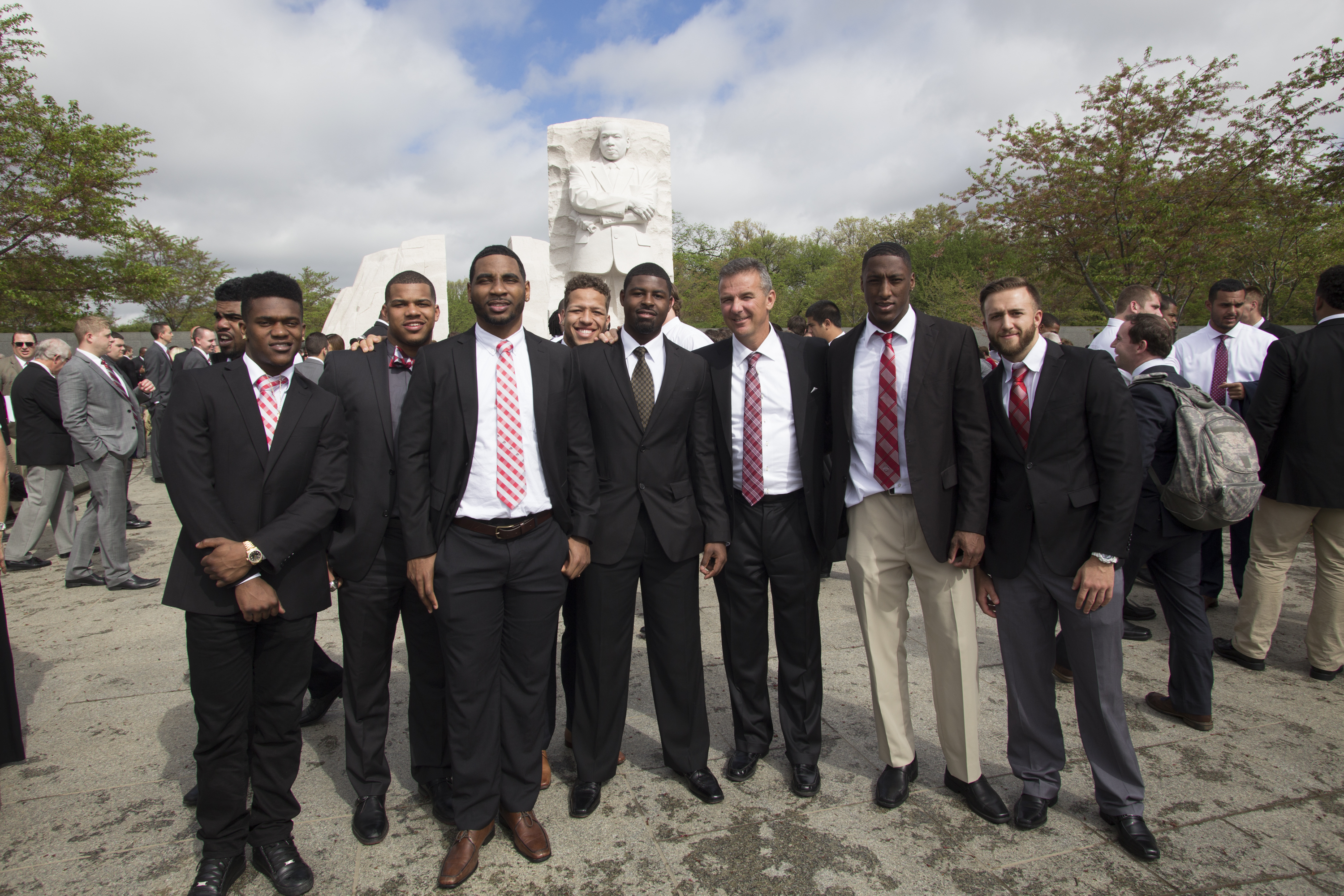 Leonard L. Haynes III, who holds a PhD and honorary law degree from Ohio State, shared some thoughts with the team at the King Memorial. He is a senior director with the U.S. Department of Education’s Office of Postsecondary Education.

Next, the players headed to the White House for a three-hour visit. They took a tour and had a private meeting with President Obama in the State Dining Room before a public ceremony. Some on the tour joked that Coach Urban Meyer probably knew his way around the White House, since he visited in 2007 and 2009 when his Florida Gators were national champs. 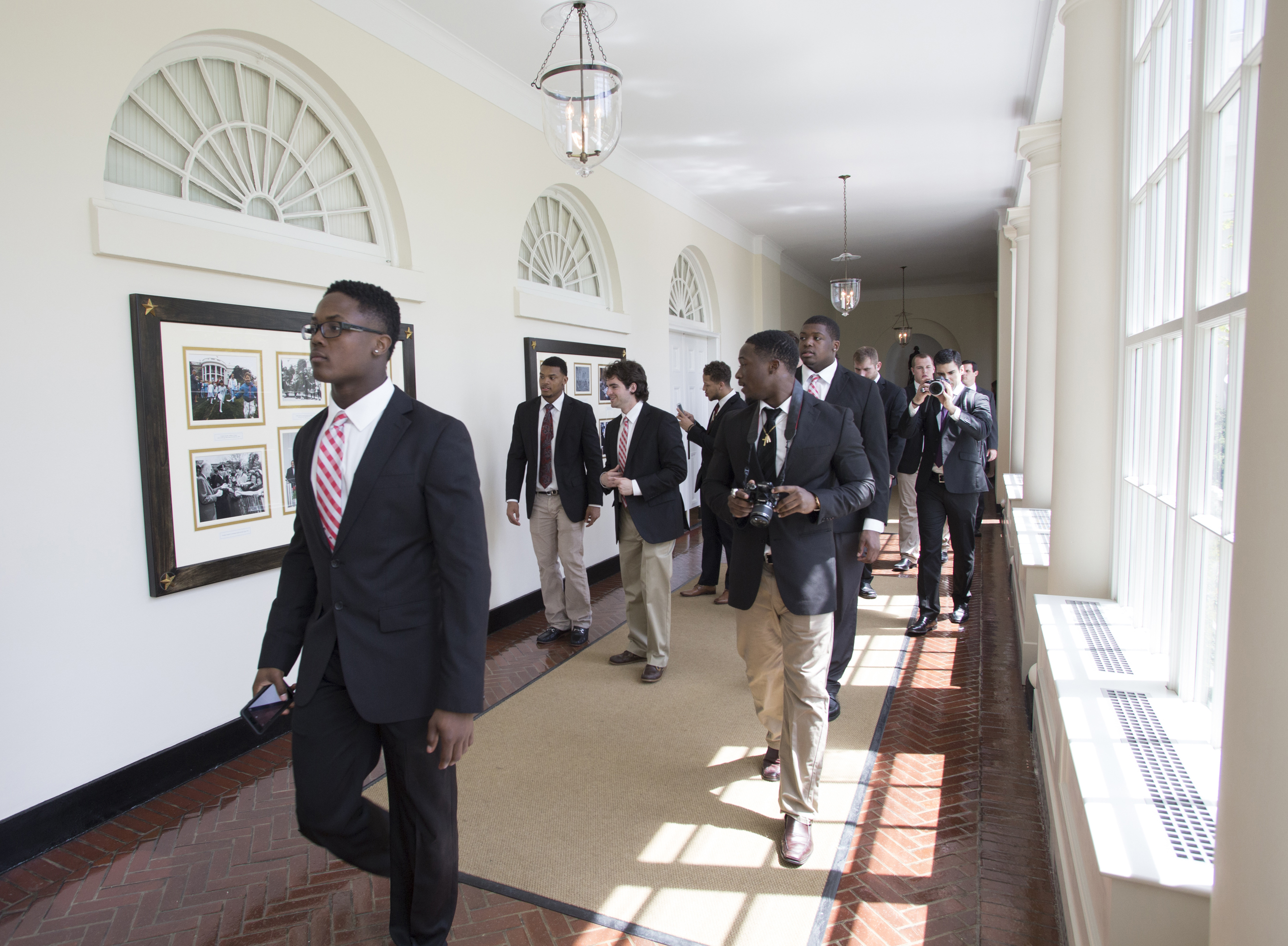 “O-H,” Obama said to open a lively and fun ceremony to honor the team in the East Room of the White House. A hearty “I-O” was returned. “And give it up to the 2014 college football national champions!” The pro-Ohio State crowd responded in kind. 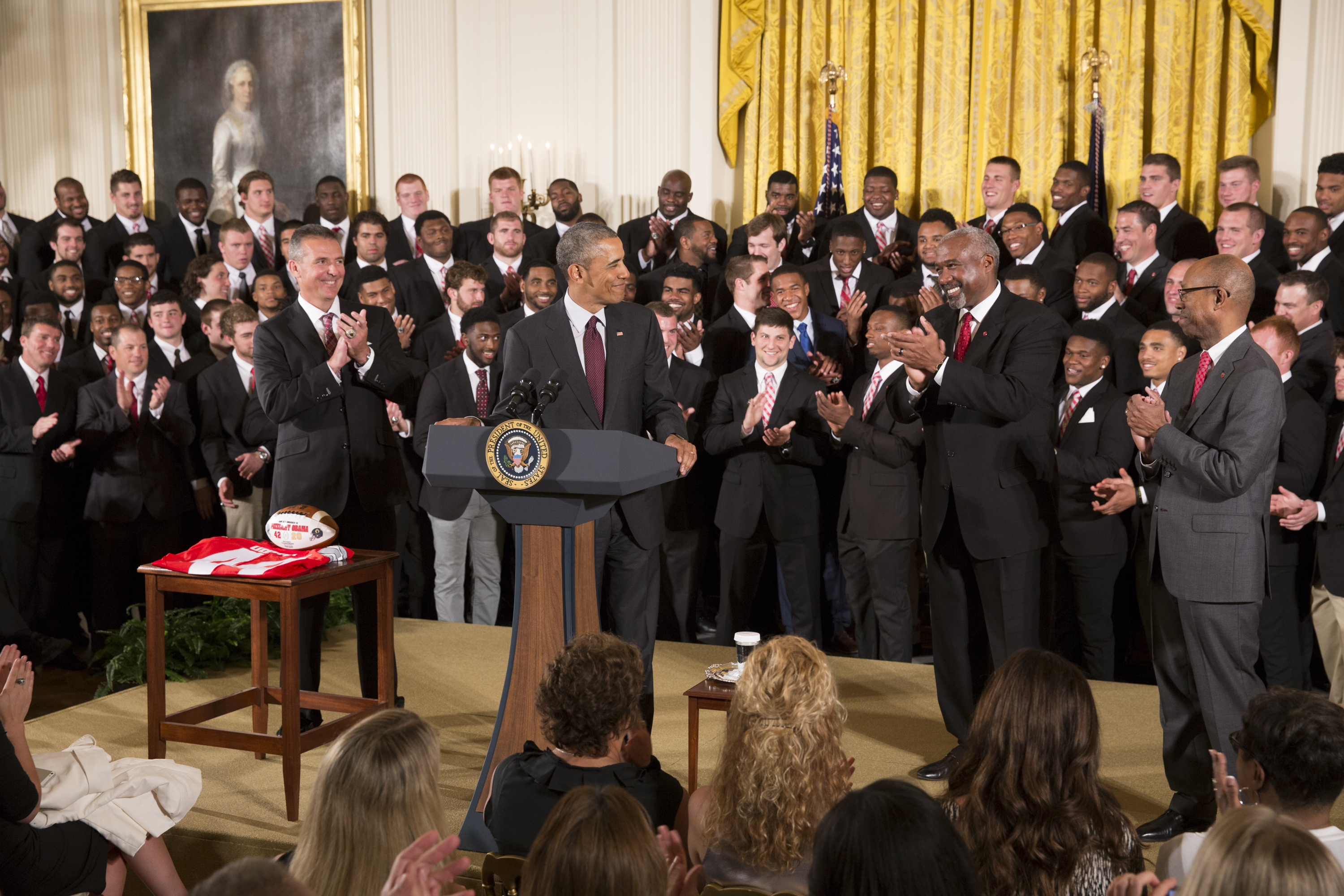 Obama noted how All-American Joey Bosa led the Big Ten in sacks and then exchanged Bosa-signature shrugs with him, saying, “I use that move sometimes.” 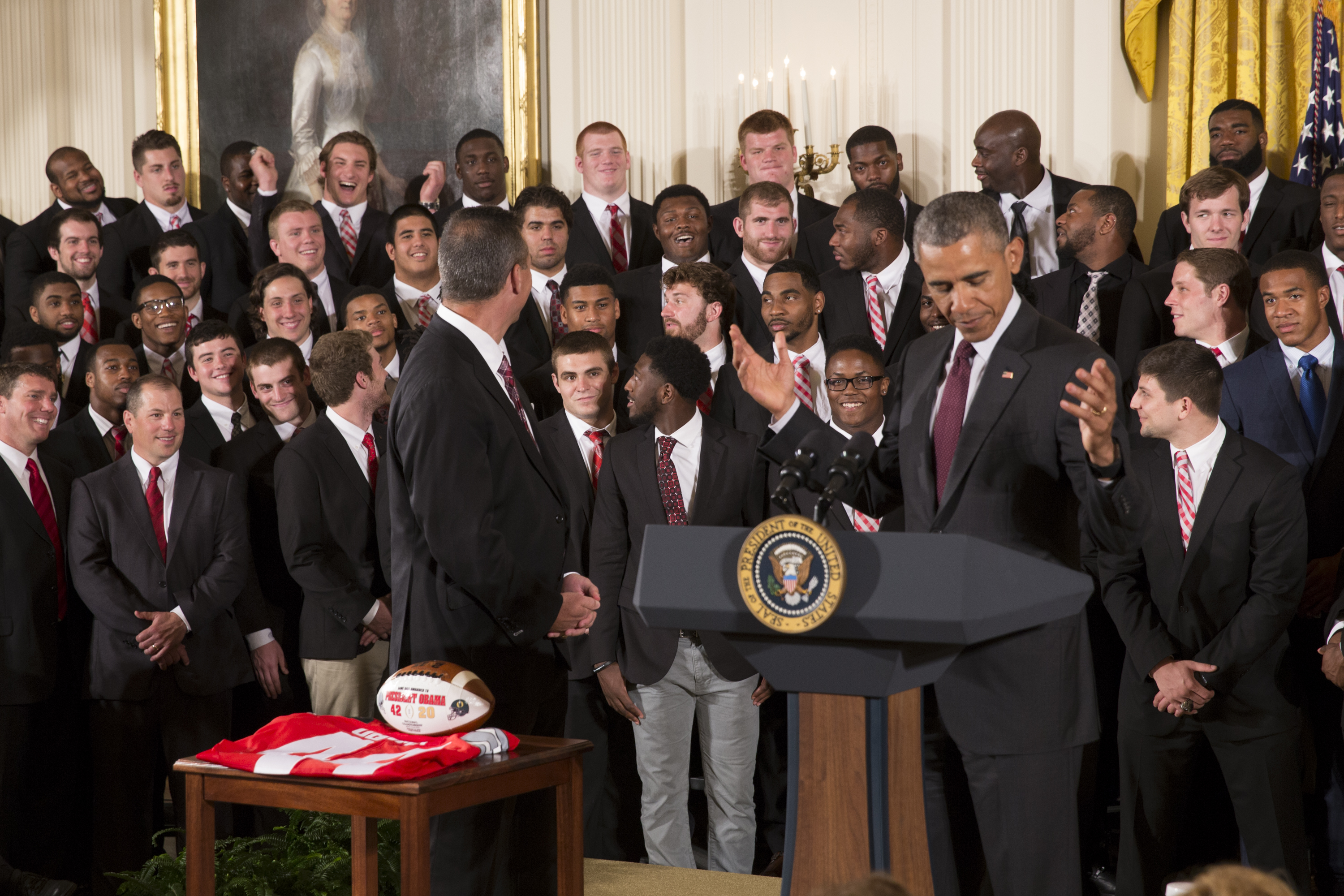 The President commended the team’s community service, noting that the Buckeyes perform as many as 1,000 man-hours of service at the Mid-Ohio Foodbank and elsewhere each year. He also gave a shout-out to Evan Spencer for earning Team MVP honors. “It meant the world,” Spencer said afterward. 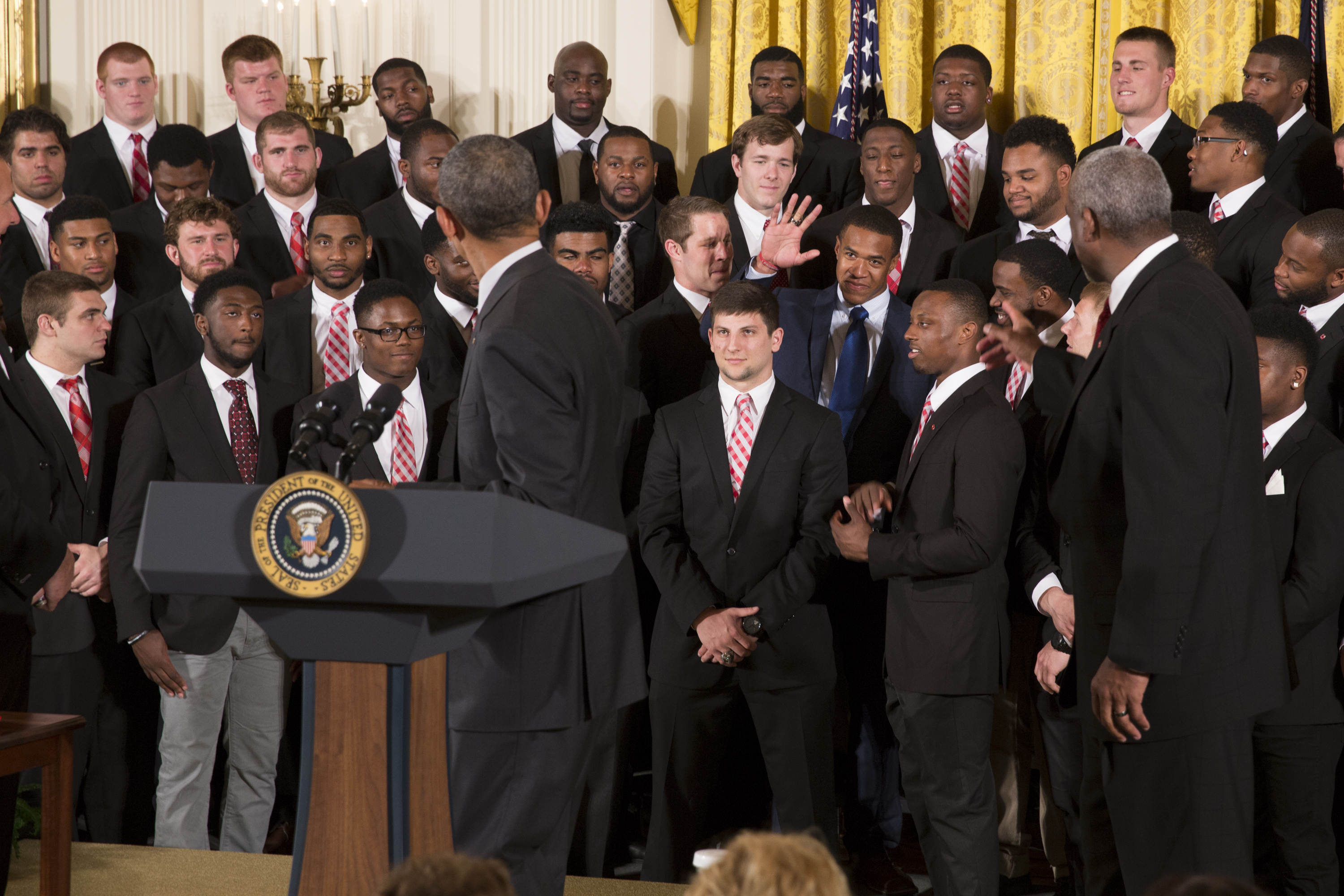 Seniors Curtis Grant and Doran Grant presented the President with two gifts: a game ball from the win over Oregon and a personalized No. 44 jersey. 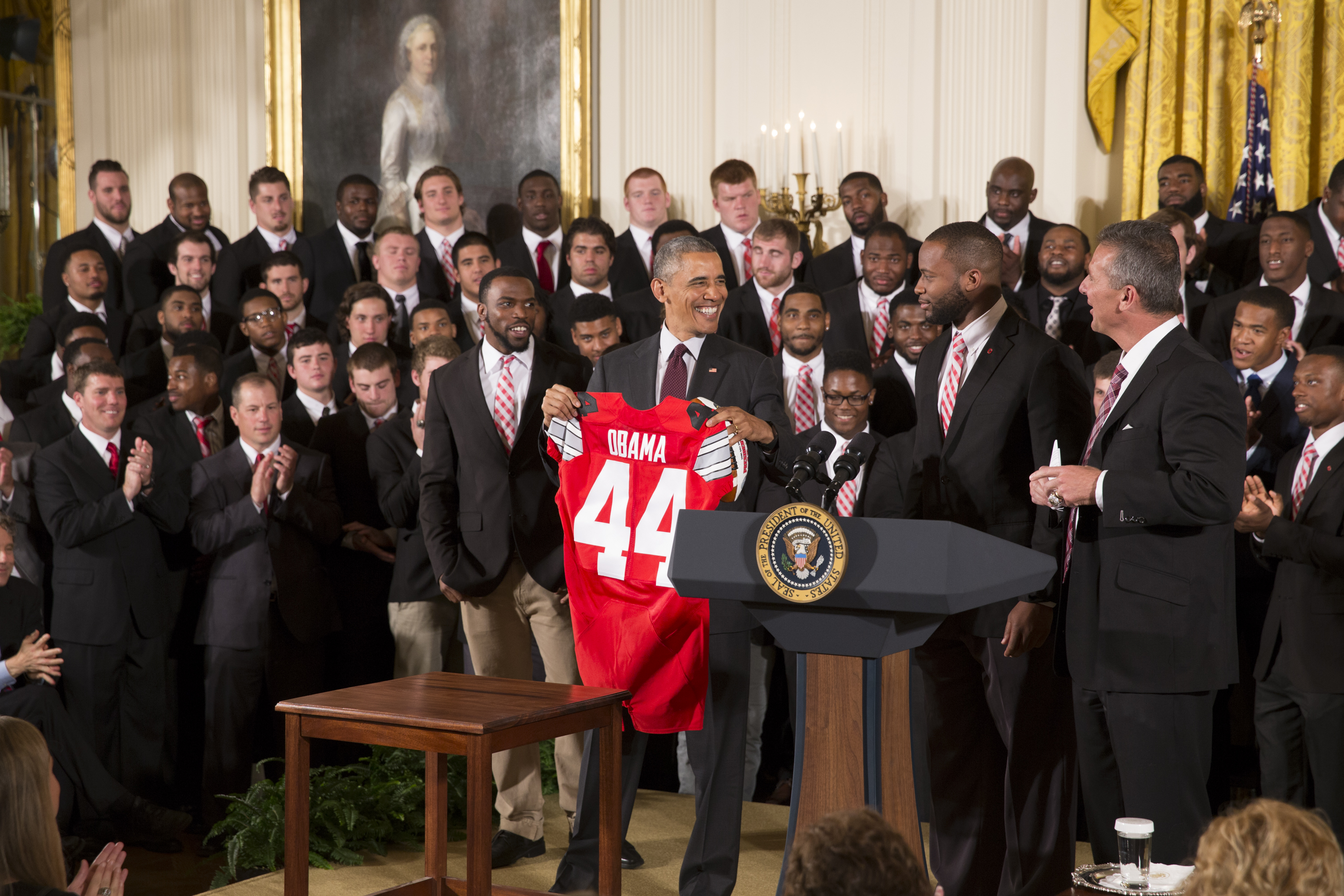 After closing the ceremony, President Obama noticed Archie Griffin in the audience and brought him on stage for a round of photos that included this one with Ohio State President Michael V. Drake, Athletic Director Gene Smith, Griffin and former Buckeye great and NFL Hall of Famer Cris Carter. 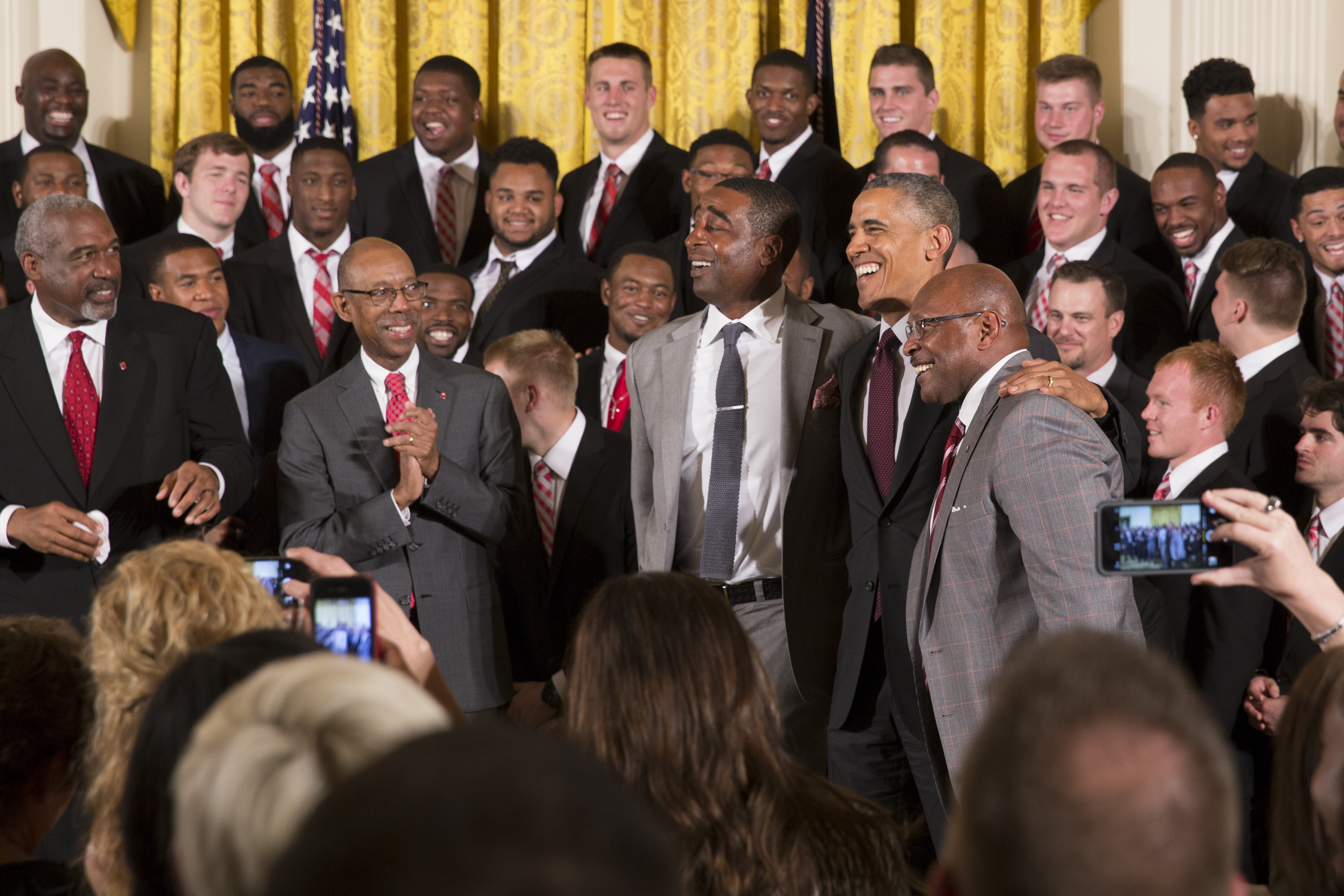 Their White House visit behind them, the team met with Ohio’s Congressional Delegation at the U.S. Capitol Building. The team joined U.S. Sens. Sherrod Brown and Rob Portman and U.S. Reps. Pat Tiberi and Joyce Beatty for a group photo on the steps of the Capitol before it was time to “Go Bucks.” 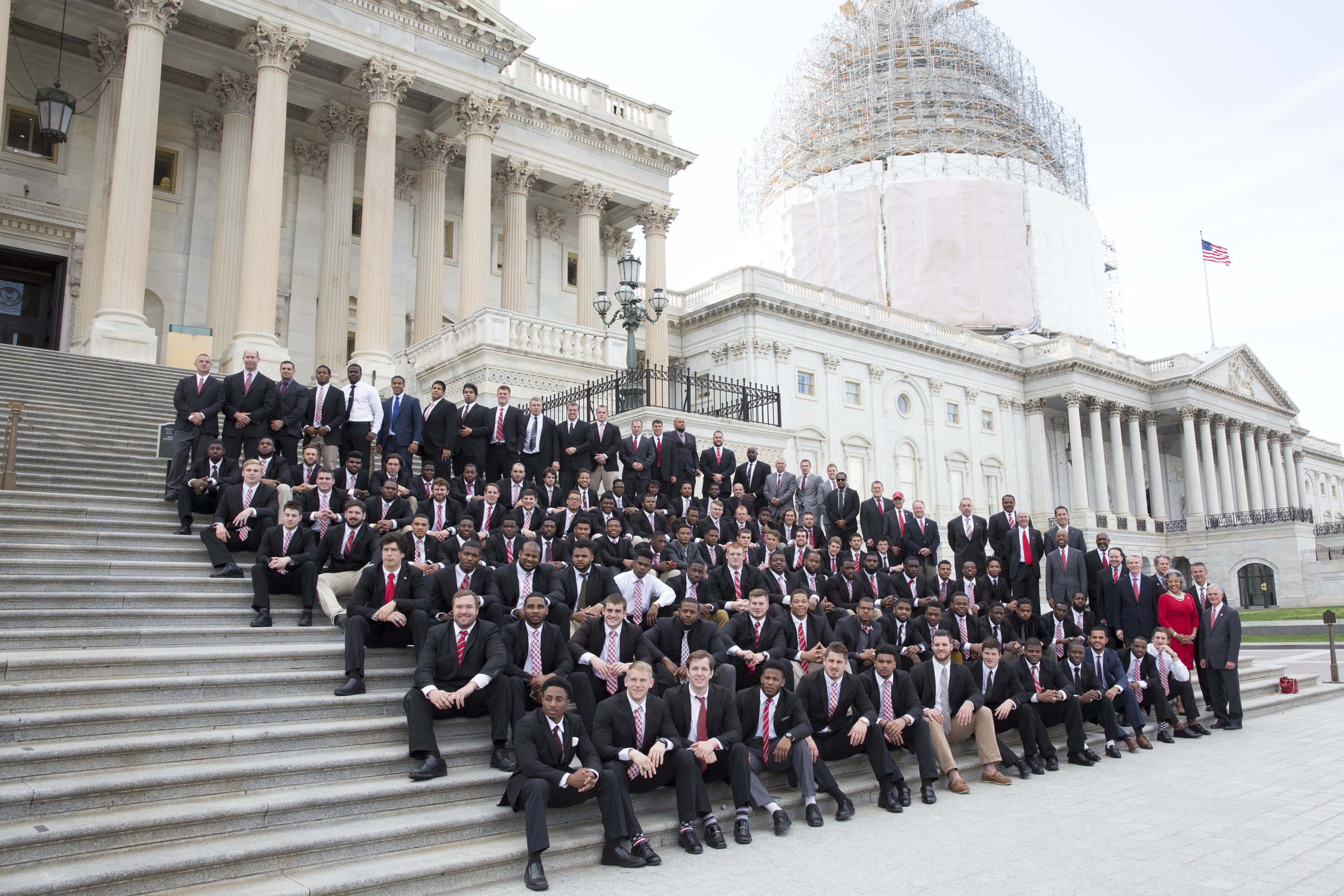 The White House
View more scenes from D.C. on Storify