Summoning the will within

Olympian Nate Ebner '12 finds his way from rugby to football and back.

EDITOR'S NOTE: Nate Ebner competed for the U.S. Olympic rugby team this summer in Rio. Read the story of his unlikely path to the Olympics below:

How does a guy make the Ohio State football team with no experience in the sport? Or transition from a limited role with the Buckeyes to a Super Bowl champion? Or from a special teams player with the New England Patriots to trying out for the U.S. Olympic rugby team?

You do it by turning to your inner beast.

“We always have a selfish voice inside of us,” said Nate Ebner ’12, who played for the Buckeyes from 2009 through 2011, becoming a special teams standout. He’s referring to the voice that — when we’re tired, hurt or even mourning — tells us to quit.

But, he contends, there’s also an inner beast that, when engaged, can crush any urge to give up. The challenge, said Ebner, is “you have to get the inner beast to get the best out of yourself.”

Ebner’s fortitude, along with family support and the refuge he found in Ohio State football, helped him through the murder of his father and the long odds of going from college walk-on to NFL football player. And now it’s guiding his return to his first love — rugby — just as the sport rejoins the Olympics for the first time since 1924.

“When you have ambition to do something, you’ve got to have the courage to do it, and Nate has never lacked courage,” said former Ohio State conditioning coach Anthony Schlegel, to whom Ebner attributes the inner beast mantra.

“There’s still risk involved” for Ebner to leave the NFL temporarily, said Schlegel, a former Ohio State linebacker, “but there’s a conviction in his heart that he has to go do this.”

Rugby to football, and tragedy

Raised in the Columbus suburb of Dublin, Ebner’s first love was rugby, which he started playing at age 6. Rugby has tackling and touchdowns like football, but its flow is more like basketball or soccer.

“It’s a little more free and [there’s] more decision-making on the fly,” Ebner said. “There’s not one position that does one specific thing. I like that everyone tackles and everyone can score.”

Football appealed to the young Ebner, too, but he never played a down at Hilliard Davidson High School. (He considered playing football as a senior, but even without him, his school won the state championship.)

Ebner was so good at rugby, there essentially wasn’t room for football. At 17, he became the youngest player ever to compete for the USA Sevens rugby team.

Nate Ebner carries the American flag into the stadium prior to Ohio State's game against Toledo in 2011. (Photo courtesy Columbus Dispatch)

The passion for rugby had come from his father, Jeff, who played the sport at the University of Minnesota. Jeff was the owner of Ebner & Sons, an auto salvage shop in Springfield, Ohio. Besides introducing Nate to rugby, Jeff worked out with his son and, Nate said, was his best friend.

So, when Nate began having thoughts about aiming for a career in the NFL, even though he still hadn’t played organized football in high school or college, he went to Jeff for advice. Jeff said that if Nate really wanted to take a shot at the NFL, he needed to go all out, leave rugby behind and try to make the football team at Ohio State as a walk-on. Then a sophomore, Nate agreed.

It was one of their final conversations.

On Nov. 13, 2008, Jeff was severely beaten during a robbery attempt at the salvage shop. He died the next day, at age 53. (The perpetrator pleaded guilty to murder and is serving a sentence of 15 years to life in prison.)

Nate slumped in depression for a time. But two months later, in January 2009, he competed with nearly 80 other students in an attempt to earn a walk-on spot on the Buckeye football team. Ebner was the only one who made the roster.

An exercise science major, Ebner was a three-time Academic All-Big Ten honoree. In 2011, his senior year, Ebner earned a scholarship and was voted the team’s most inspirational player. Still, Ebner was not among the marquee names on the Ohio State squad. A defensive back who excelled on special teams, he recorded just 30 tackles in three seasons.

And yet, in the specialized world of the NFL, Ebner held great value, at least to a keen eye. 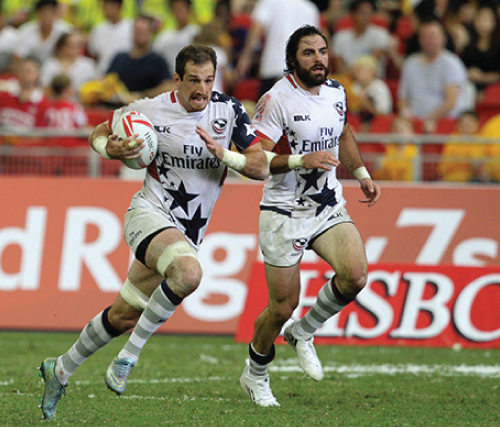 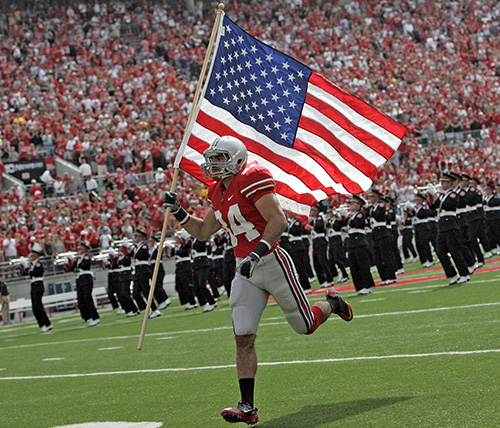 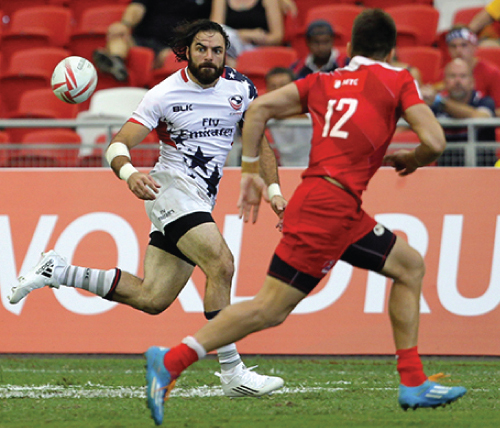 To the NFL and its pinnacle

In 2012, the New England Patriots chose Ebner in the sixth round of the NFL draft. During the 2014 season, which climaxed with the Patriots winning Super Bowl XLIX, head coach Bill Belichick lauded Ebner’s development, telling Sports Illustrated he considered him “maybe in the top 5 percent all time of players that I’ve coached, from where they were in college to how they grew in the NFL.”

On March 12, 2016, about a year after Ebner earned his Super Bowl ring, he reached agreement on a two-year, $2.4 million contract with the Patriots.

Yet three days later, with the Patriots’ blessing, Ebner announced he was taking a leave of absence to try out for the U.S. Olympic rugby team.

There are risks to his NFL career. Other Patriots players might gain an edge on him while he’s away. He could get hurt.

“But at the same time, if I didn’t do it, I feel like I would regret it the rest of my life,” Ebner said. “There’s a risk in everything in life. That’s not a good enough reason not to do something.”

Back to trying out again

So, he’s going from millionaire NFL player back to square one: just trying to make a team.

On one hand, Ebner — at age 27, 6 feet tall and 220 pounds — is an elite athlete in his prime. At the same time, it’s been years since he’s played high-level rugby, and he’s competing against full-time members of USA Rugby for a spot on the 12-man Olympic team. But he quickly made his mark.

“His arrival into the program has been refreshing for us as coaches, and he brings different experiences from the Patriots which we can learn from — and we are embracing that,” head coach Mike Friday said in April 2016. “You can see he has a strong desire in his eyes and the way he goes about his business that he wants to succeed.”

The U.S. Olympic roster will be announced in mid-July, just weeks before the Games start in Rio de Janeiro. So there’s time for Ebner to tap his inner beast.

“Making it to the Super Bowl after what I went through just to get there, there’s a lot of meaning behind that. Not only to play in a Super Bowl, but win it,” Ebner said.

They’re hard to compare, but making the Olympic team — given Ebner’s lifelong connection to rugby and rugby’s connection to his late father — might be on a par with a Super Bowl win.

“It would be humbling and a great experience,” he said, “and it would mean a lot in a whole different way.”

Tom Kertscher earned his master’s degree at Ohio State in 1993 on a Kiplinger Fellowship. He is the author of two sports books, Cracked Sidewalks and French Pastry: The Wit and Wisdom of Al McGuire and Brett Favre: A Packer Fan’s Tribute, and a PolitiFact Wisconsin reporter at the Milwaukee Journal Sentinel. He recently wrote about his connection to “Making A Murderer” for the Ohio State Alumni digital magazine.

Five questions for the career experts

Finding her own place