The Alumni Club of Greater Washington, D.C. has helped open the door of opportunity for one first-year engineering student.

Sangram Grewal, a freshman from Herndon, Virginia, began his first year at Ohio State this fall with the help of a scholarship from the Alumni Club of Greater Washington, D.C. Though this is just the beginning of his career as a Buckeye, the computer science and engineering major and ROTC member has big plans for his future — both as a student now and as a graduate later on. 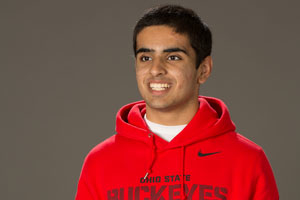 Why did you decide to attend Ohio State?

I get asked that a lot. When I was doing my college research I learned that our engineering school is ranked a top 25 school for engineering, so that impressed me. Another big reason I chose OSU was for its status as a household name around the world. For example, if I went to Virginia Tech like the rest of my high school I would probably find a job easily in the state of Virginia. But OSU's alumni network and prestige extend across America and across the globe.

Was it difficult choosing somewhere far from home?

Going out of state anywhere is more expensive, but with the generous things I got from the merit aid and the alumni scholarship, I was able to.

How else has the Alumni Club of Greater Washington, D.C. scholarship helped you?

The alumni scholarship basically gives me more incentive to do well at Ohio State and to get more involved in the alumni club after all they did for me. It also had an impact on my parents. Every bit helps. It puts them at ease, and that puts me at ease. I can worry much less about the financial side and focus on school.

What did you think of the university when the semester started?

The first thing that gets you is the size of it; there are just so many people. But Ohio State really goes the extra mile to try to get you in a smaller group. Like there are clubs and fraternities and interest groups, so that really appealed to me. I am the only one from my high school who went here, but I was lucky enough to make some good friends in my dorm.

And how are things now that you’re settling in?

I feel like things are going well. It’s a lot more work than high school, but I’m going to accept the challenge. My favorite thing so far was going to the football game [against Virginia Tech]. Even though we lost, it was still an unforgettable first experience.

What do you hope to accomplish during your time at Ohio State?

What are your goals for the future?