John Glenn, the first American to see Earth from space, shares his perspective on the Ohio State college that bears his name, the state of politics today and more.

As Ohio State’s Glenn College of Public Affairs prepared for its first academic year with college status, Ohio State Alumni magazine sat down with former Sen. John Glenn, who turned 94 in July. Herb Asher — first director of the college’s predecessor, the John Glenn Institute for Public Service and Public Policy, established in 1998 — joined the conversation, which covered the college, the space program and the state of politics today.

Why is Ohio State a good fit for the Glenn College?

John Glenn: Ohio State started out as a land-grant college way back in the 1800s. It had a responsibility then to do basic education and research for all the people of Ohio, and you can’t get a much bigger mandate than that. Of course, back in those days that meant mainly agricultural research. But since that time, Ohio State has advanced through all the different areas of research that we now know it’s known for — not only agriculture, but engineering and science and technology and education and the whole thing — and we’re proud to be a part of that and add to that.

President Drake, in some of his opening statements here, expressed his views, and I think they were right on. No. 1, Ohio State must be affordable to students. And it isn’t going to mean anything whether it’s affordable or not unless it has an excellence and it’s a top contender in all the areas of education. And it needs to be very diverse; it has to cater across the board to all of our citizens. It is a very diverse university, and that makes it more valuable. It’s involvement with the community goes way back to its founding as a land-grant college. The whole university has a commitment to the state of Ohio and the communities that make up the state, and we’re glad to be part of that kind of representation.

What are some of the values you hope students take away from the Glenn College?

Glenn: If there’s one thing I hope people come out of our courses with it’s an unbridled curiosity about how we can do things new and in a different way or a better way. And if you think about it, that whole question is what’s at the heart of every bit of human progress since people came out of a cave: curiosity about the new and the unknown, basic research. And basic research is just as applicable in government and politics and doing all that for the benefit of everybody as discoveries in math or engineering or a new way to make automobiles or whatever.

Herb Asher: Faculty of the college do outstanding research. It’s very balanced; it’s very scientific. It does not have party ideological biases to it. We can be proud that what the John Glenn College is doing is trying to offer to public policy debates really good, solid information, results and recommendations. … There is a lot of important research that is done throughout the university in so many other colleges that really is relevant to decision-makers at all levels of government. I think the Glenn College can also serve as a portal, a conduit, to getting more of that information out there to decision makers. 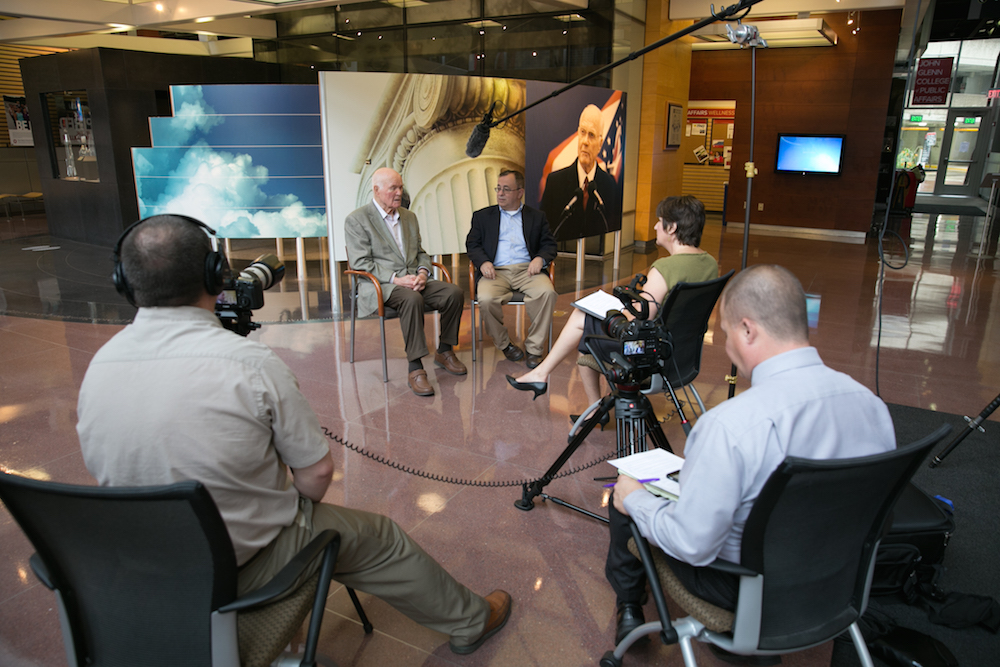 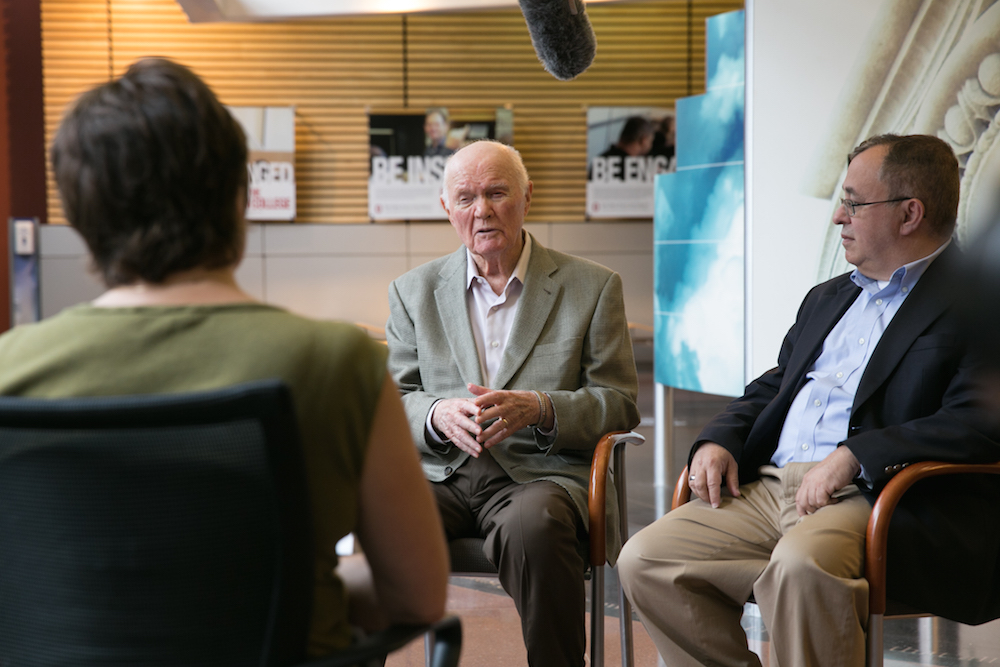 Former Sen. John Glenn and Herb Asher discuss the evolution of the Glenn College of Public Affairs during an interview this summer in the lobby of Page Hall.

Senator Glenn, if you had to name just one person who spurred your commitment to public service, who would it be?

Glenn: The one person who I think influenced my appreciation for government and politics and civic education was a teacher I had in high school, and his name was Harford Steele. He taught civics, but he didn’t just take that on as an ordinary course. He really worked overtime trying to make it something interesting and positive and [used] a lot of examples and definitions about why certain types of events in history made such a big difference later. He just made the whole study of civics and government come alive, and I used to look forward to his classes. And from then on, I always had an interest in government and politics. What he did in that course in high school was something that did affect my whole life. I never thought in my life I would have the opportunity to run for public office, but I did, and it was because of the interest I continued through the years because of his influence. So I think teachers are just invaluable in this area [of civic engagement].

Can you talk about the connection between public service and personal success?

Glenn: I think 99 percent of the people who are successful took an interest in other things, community affairs, and learned about that and were active in their communities. I’d like to see a time when every single person is a member of a political party. I’m not here to dictate what that would be; it’s up to people to decide what their own beliefs are about the future of this country. But I think that kind of thinking, about what you want your own political party to stand for and being an active member of the party and supporting candidates who are supportive of those same views, that’s the system that developed in this country. We need attention to it to make sure that it doesn’t get carried to extremes. That’s something that at our college can help put across — the idea that there are different ideas and we should consider them all.

Asher: If we did a good job in civics education starting with young students and really had students come away with an understanding of what their rights, responsibilities and obligations are as citizens, what obligations they had to their community, to their schools, if we did good job with that — and iCivics [a collaboration involving the Glenn College] is going to really be helpful there — then we can move on into careers. Whether they’re going to Wall Street or they’re going somewhere else, they’ll still be anchored, they’ll still be rooted, in the understanding that there are obligations and responsibilities that citizens have. When they don’t have that, then they could have just a very lopsided view.

NEW Leadership Ohio is a Glenn College program that addresses the underrepresentation of women in American politics. Why is that important to you?

Glenn: There are a lot of occupations yet that women don’t look at as being career fields for them as much as they are for men. And that certainly can be altered. In the area of politics, you just look at the roles of elected officials. Women comprise just over 50 percent of our population, but they don’t comprise over 50 percent of our elected officials. And I’m not saying that has to balance out. But the idea is that there are certain positions within our society, certain jobs or businesses or enterprises that women would like to do as careers. There aren’t many occupations that should be restricted to either women or men, either direction. So if we do our job here, we’re going to open people’s minds to this idea, to let people be imaginative and research-oriented and get into whatever interests them and whatever gives them the greatest opportunity.

Asher: If we can expand horizons and have people say, “I can do this or I can do that” — where in the past they may have seen impediments but now they see opportunities — then we’re going to accomplish something very important. 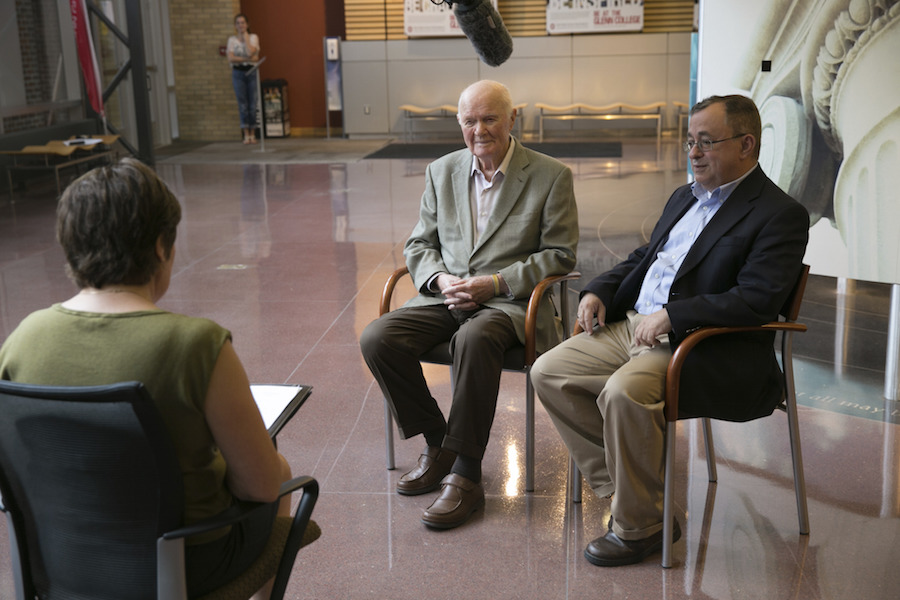 What’s your view of politics today, and in particular, the partisanship?

Glenn: Things are far more divisive now than they were when I was in the Senate, and I’m sorry that Congress in particular has developed that way. I think the country is the poorer because of it. We have too many people who are just locked in — as they say, it’s their way or the highway — and it’s too bad.

What’s the solution to the squabbling?

Glenn: Getting control of the money chase to be able to run — that’s a big one. There needs to be some legislation in that area. I don’t think we should be able to have the super wealthy in our country contribute literally hundreds of millions of dollars to very few candidates under current law, which occurred because of the Supreme Court decision [in Citizens United v. FEC], which I disagreed with. I don’t think you should be able to in effect almost buy a congressional seat with that kind of infusion of money.

Asher: I think the point Senator Glenn made about getting to know each other and recognizing that you may be opponents on an issue but you’re not enemies [is a good one]. The rhetoric has gotten out of hand. I know a lot of people are talking about civility. It goes beyond civility, but if you’re uncivil to each other, what else can you possibly accomplish? You can’t even reach that level of respect. I remember in the old days, the phrase would’ve been, “I beg to differ with the learned gentleman from Ohio.” And now it’s [Glenn interjects here], “You dirty so-and-so.”

Glenn: Let me give a little example here. Bob Byrd, when he was majority leader, thought we needed more of this getting together. And so he started a thing that lasted for several years, and I thought it was very good. We would have a dinner. And the idea of the dinner was, you would bring your spouse, and you had these big 10-person tables. And you were to sit with somebody of the opposite party who you didn’t know. So you had dinner, and we had some entertainment. And Bob Byrd was a championship fiddler, an old country fiddler, when he was a younger person, and he would entertain sometimes. And we had a Republican men’s quartet, a barbershop quartet, and they performed several times. So it was just a little different social feeling toward people. Now does that solve problems? No it doesn’t solve all the problems, but it’s a step in the right direction.

Trevor Brown, dean of the Glenn College, talks about the college’s rich past and promising future in Buckeye Voices.

A legacy off the field

About the Glenn College

Its bachelor’s, master’s and PhD programs enroll about 500 students each year.

The college’s learning community offers up to 75 students the chance to live alongside other civic-minded residents.