An inspiring show of spirit 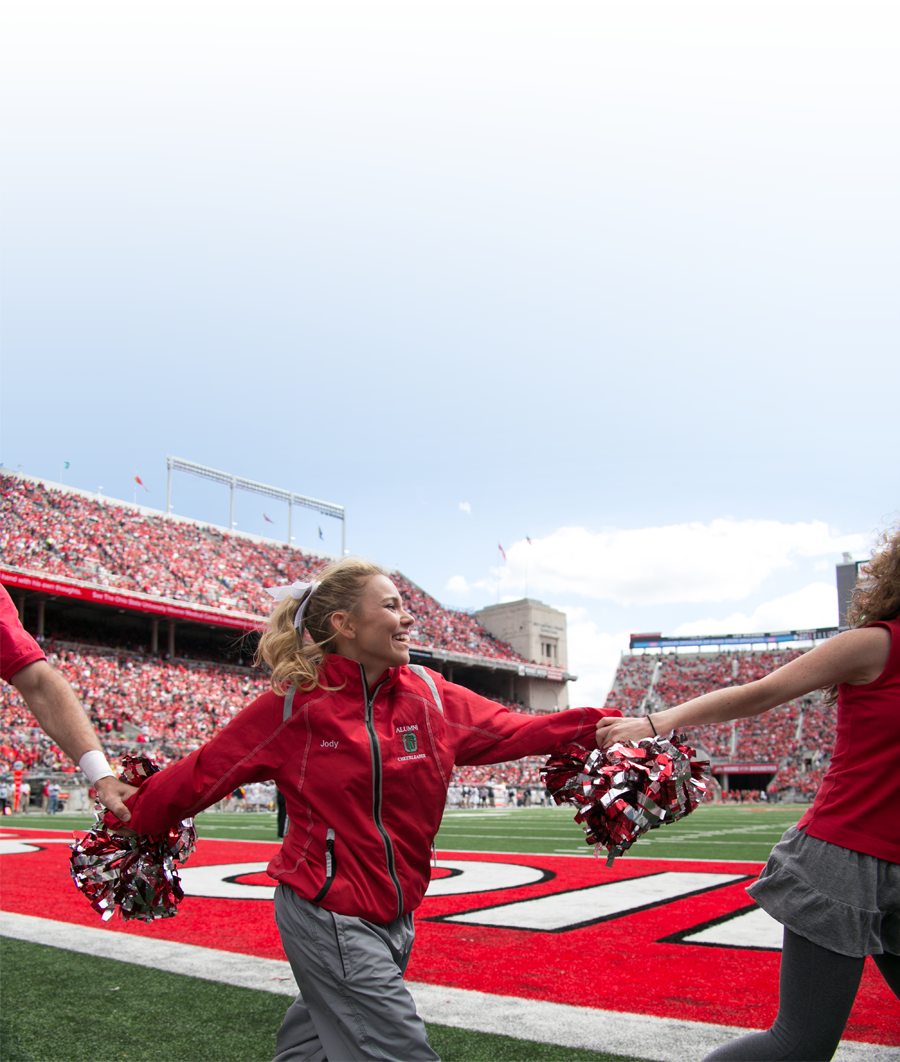 Jody Stevenson, believed to be the only deaf person to serve as an Ohio State cheerleader, cheered for the Buckeyes in 1998–99. She now teaches high school students American Sign Language for Los Angeles Unified School District and continues to pursue the acting career she embarked on after graduating with a bachelor’s degree in theater in 2003.

I understand you were born in Germany and raised in Columbus, correct?

My father was stationed in Athens, Greece, between 1975 and 1978, serving the Hellenikon Air Base as its general dentist. While in Greece, my mom got pregnant with me, and there were no obstetricians at the Air Force hospital in Athens, so my parents had to move to Germany to be near a regional hospital in Landstuhl. We moved to Columbus when I was 13 months old, and my parents have been living in the same house ever since.

Growing up, what schools did you attend, and when did you learn sign language?

I was not diagnosed with hearing loss until I was almost 3, as my parents noticed that I was not talking when I was a little over a year old. After a hearing test showed I had 90 percent hearing loss in both ears, I started attending Huy Road preschool with other deaf children in Columbus, where I learned sign language. Then I attended Columbus schools with hearing children with the support of sign language interpreters. In high school, I was on the drill team doing dance routines at football games.

What attracted you to Ohio State?

My family has a very strong history of Ohio State alumni — like my father, Robert Stevenson ’75 DDS, ’80 MS, ’80 MA, who met my mom, Barbara Sulick Stevenson, there. Additionally, my great-grandfather and grandfather graduated from Ohio State’s medical school. My grandfather met my grandmother at Ohio State, where she graduated from nursing school. I had a goal to become an Ohio State cheerleader during my high school years after attending a summer cheerleading camp elsewhere, and I was aware that Ohio State has a strong reputation in academics. I first majored in interior design, but I ended up graduating with a BA in theater since I love interacting with people through acting. I thank the Ohio State tutoring department for helping me succeed in my studies.

What challenges did you have as a cheerleader and how did you overcome them?

After I became part of the team, I did not have a sign language interpreter at rehearsals or games. I had friends like fellow cheerleader Pete Aguirre help me keep up with what was going on. Peter understood since he was deaf in one ear, and he became my partner. I felt honored to be on the squad. I felt honored to perform the “Buckeye Battle Cry”at the games, feeling the strong beats from the brass instruments. To keep up with the chants, I would practice them during speech therapy at Ohio State’s Speech-Language-Hearing Clinic because I can’t hear the words the same as hearing people.

Tell me about your acting career.

I arrived in Los Angeles in 2003 and met two successful deaf actors, Bob Hiltermann and C.J. Jones, who connected me with Media Access Office, an organization that represents performers with disabilities in the entertainment industry. Media Access sent me out for my big break on the “Grounded for Life” television show. I was also on ABC Family’s “Switched at Birth,” playing the part of a wedding guest along with renowned, Oscar-winning actress Marlee Matlin. Recently, I played the character of Antonia in “Romeo and Juliet,” directed by Aly Easton in Hollywood. Presently, I’m writing a script for “The Mirrored City,” a play directed by Jan Alejandro, which is about a young woman’s spiritual journey as a Christian.

And you’re teaching as well?

I am now teaching ASL classes full-time at a high school in Los Angeles Unified School District. The majority of my students are hearing. However, I do have deaf students in all my classes, and we try to spread the number of deaf students out evenly in each class so they can help other students learn ASL.

What do you enjoy about teaching?

What I enjoy the most about teaching is realizing that it also helps the students improve their communication skills in both their personal and professional lives besides communicating with others in sign language. It helps them express better, using facial expression and body language, as well improves their abilities in reading people.

I feel it uses my strength in viewing deafness as a “gift” that I should be blessed with instead of a handicap. Had deafness not existed, ASL would not have been created, and the art of communication in society would have been more dull.

Megan Clancy is a freelance journalist and blog writer who met Jody Stevenson at a film event in Los Angeles.

A leap from the lab