Fan John Crawford prepping for this week’s Homecoming contest with an incredible home-game streak to his credit.

It is telling that John Crawford ’53 calls those few dreary, rain-drenched days he spent cheering for his beloved Buckeyes more than 2,300 miles from home one of the highlights of his life.

Crawford, after all, has led a life that many others could only dream of. He’s been a successful and popular entertainer, a critically acclaimed artist/illustrator and molded the lives of a generation of young people as a teacher in Columbus City Schools.

But the Buckeyes are a constant that wound through much of his life before that soggy 1955 Rose Bowl and certainly through just about everything that has come since.

One would think someone who has attended every single Buckeye game in Ohio Stadium since 1943 might tend to be a bit, shall we say, one-dimensional. But that’s not John Crawford.

Now 84 years old, he can still rattle off a joke or croon a tune from the days when he was a three-time winner on the nationally televised “Ted Mack Original Amateur Hour” as an Ohio State undergrad. And he can spout lines from his days as host and lead character on WOSU-TV’s 1960s children’s show “B. Grubby.” Or recite — right down to the stage directions — his parts in any of the numerous theater productions he appeared in back in the day.

He pulls off a convincing cockney and can contort his face as well as Sid Caesar ever did just to draw a couple of yuks. He’s one of those people who just likes to make people laugh, and he’s still good at it.

“Comedy has taken me a lot of different places,” Crawford said. “I performed at Madison Square Garden, I was on all the local TV stations back when they used to have their own variety shows. It’s been a lot of fun.” 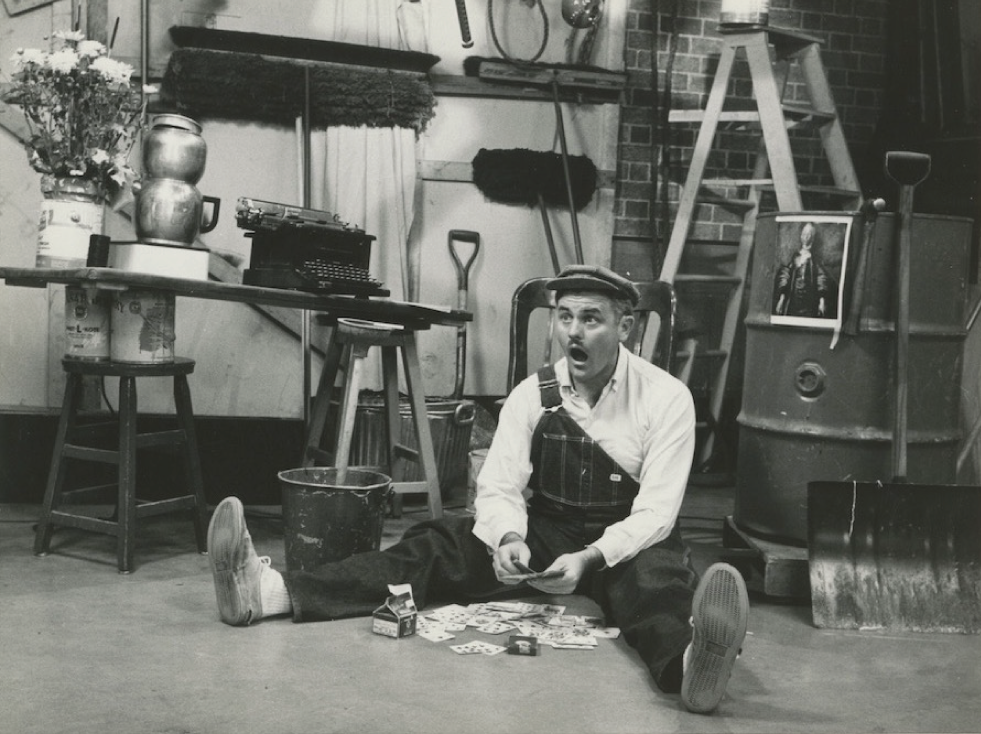 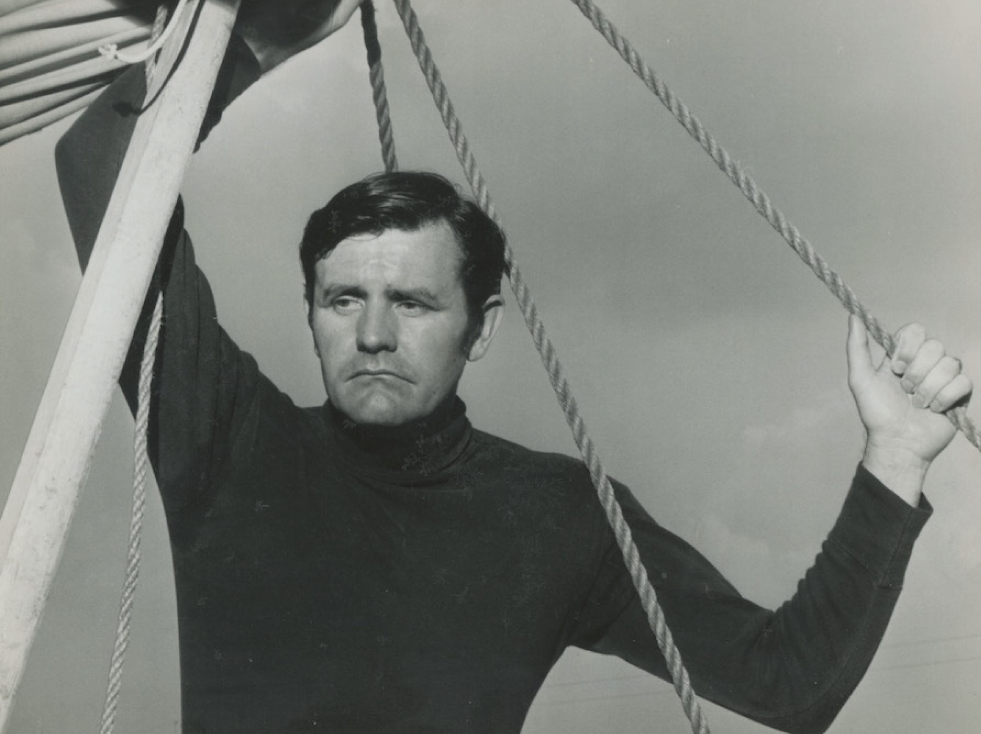 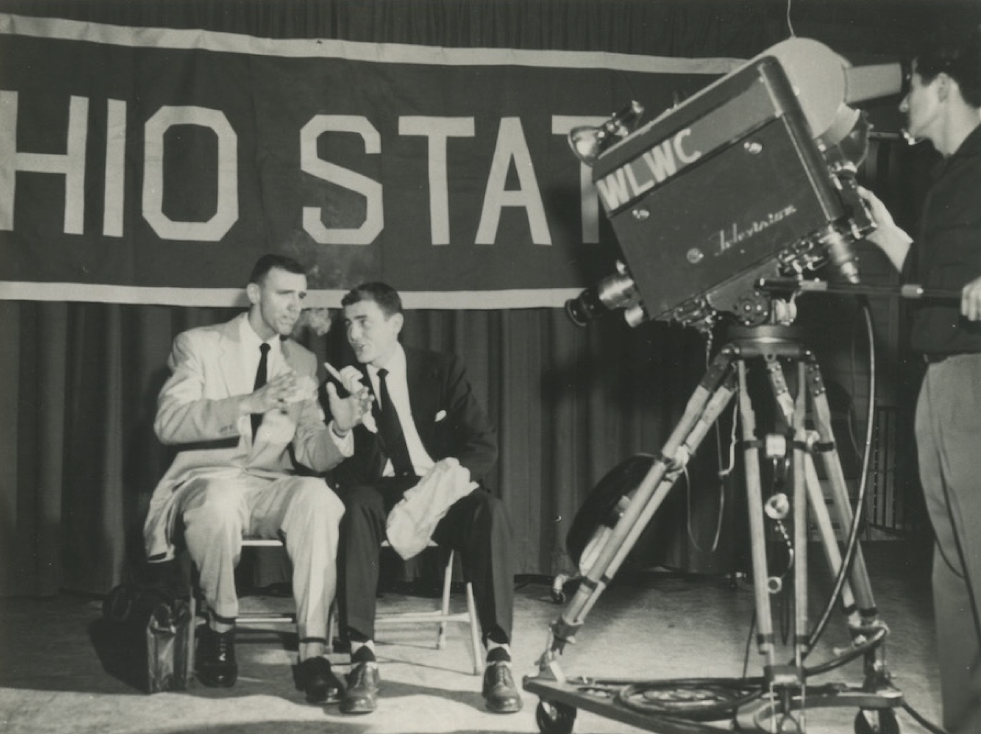 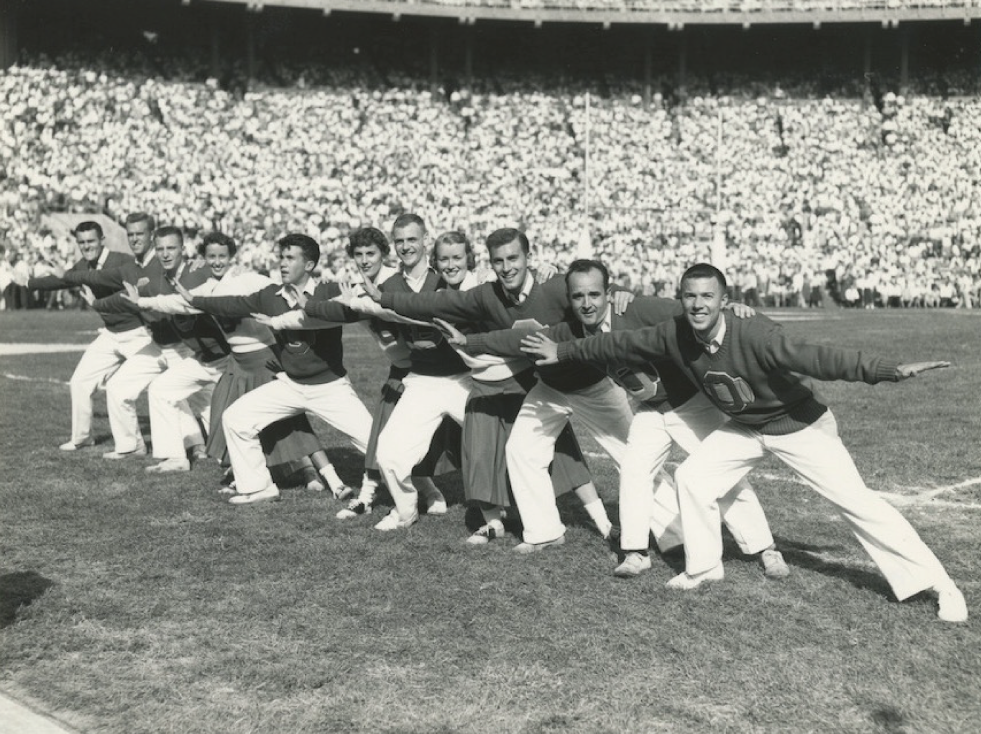 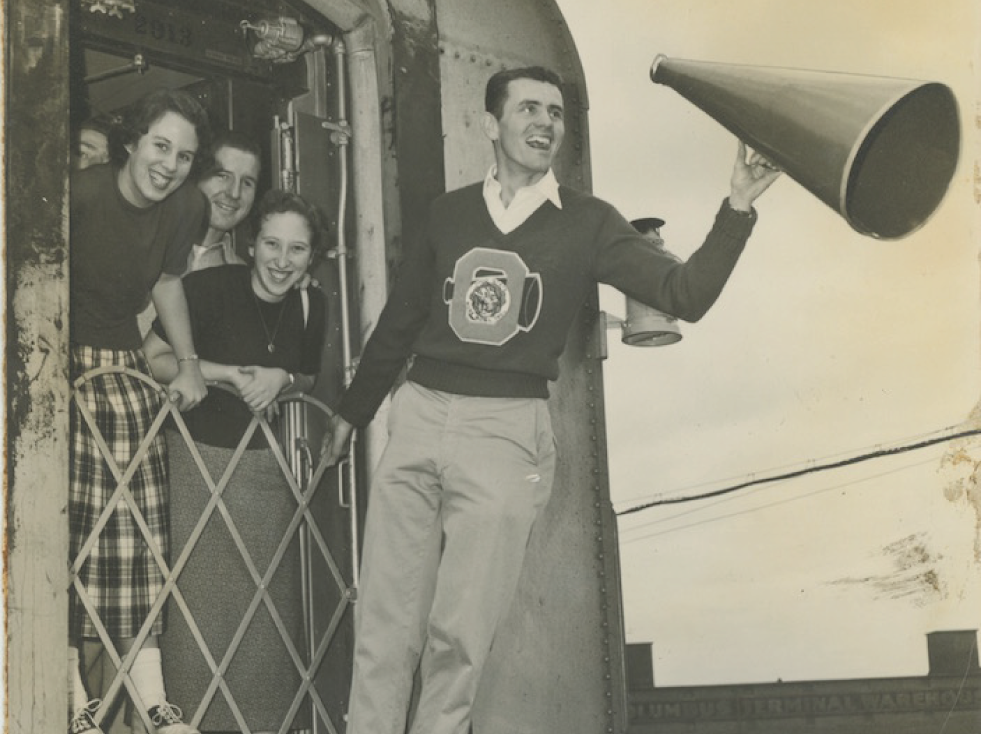 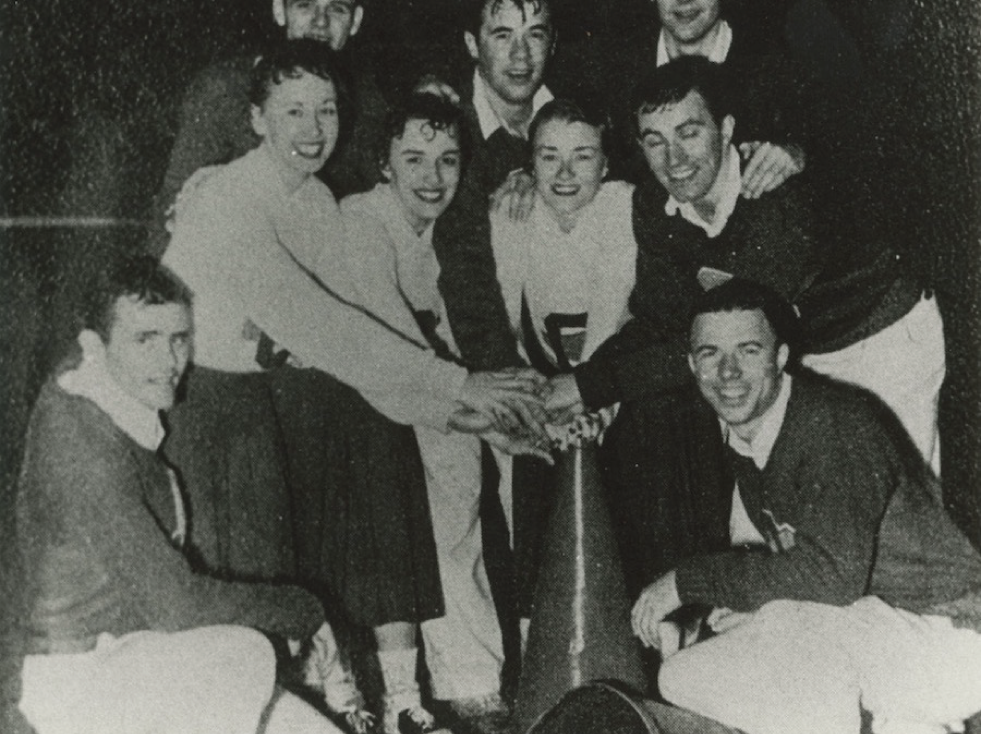 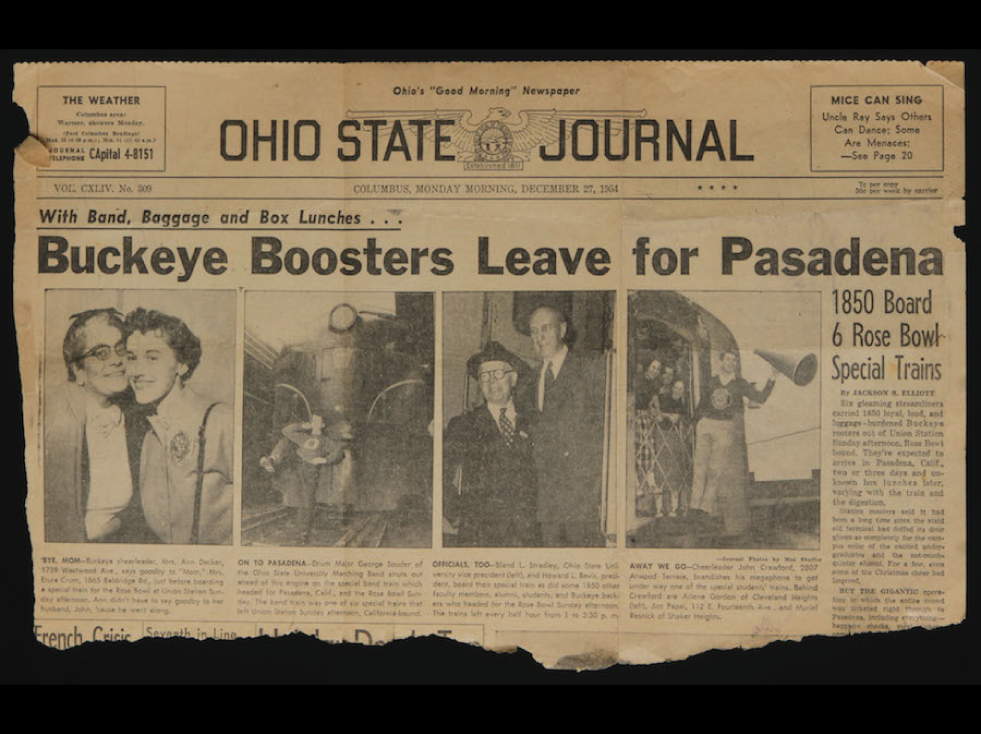 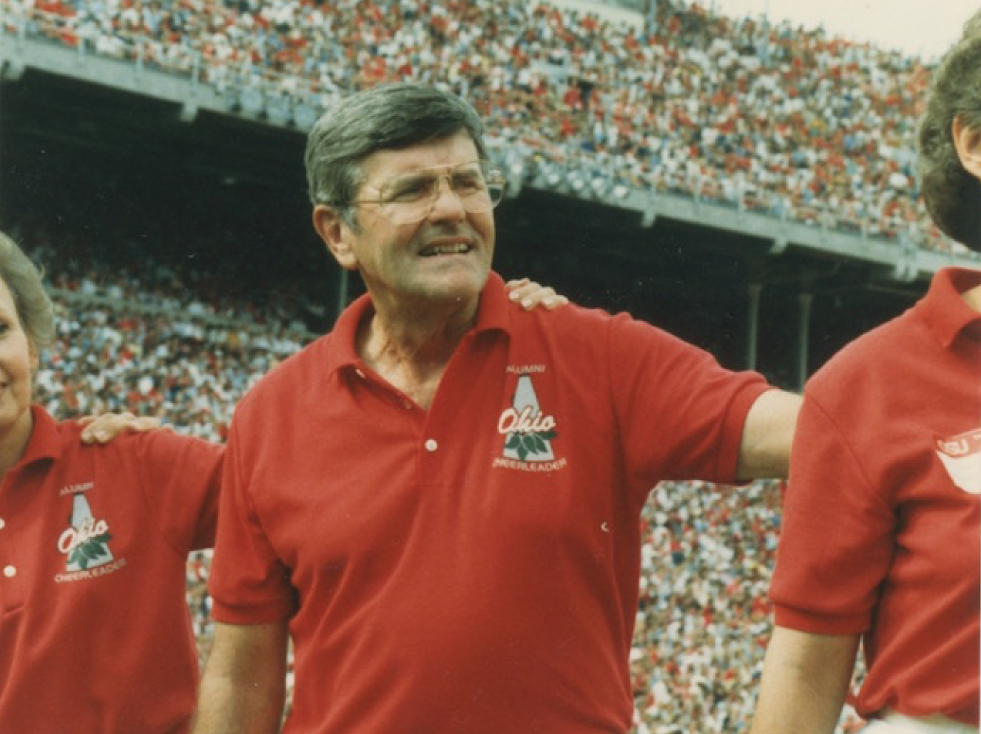 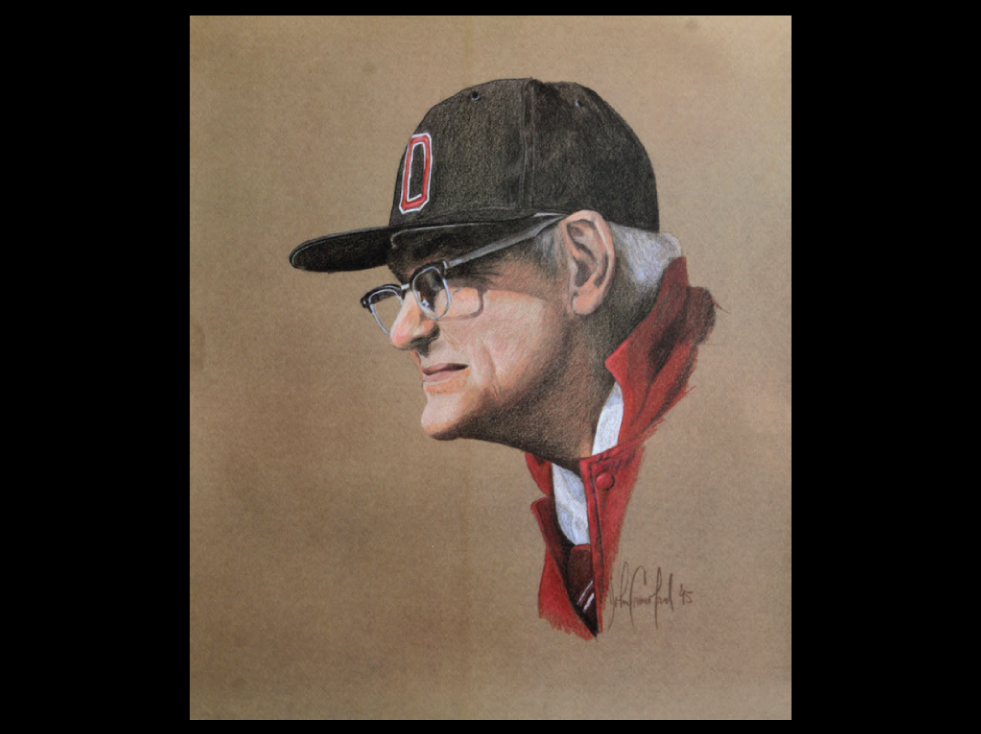 It was Crawford’s stage presence, along with his powerful voice, that landed him in front of one of the largest audiences of his career.

Crawford enrolled at Ohio State after graduating from Columbus’ Linden McKinley High in 1949 (already six years into his attendance string). He had begun making a name for himself on the local variety show/comedy circuit when the university decided to revive Block O from its war hiatus for the 1951 football season.

Crawford auditioned to be field director and got the part, leading the cheering section as it rolled through its run of intricate card designs during the ’51 and ’52 seasons. He earned his bachelor of fine arts degree in commercial art in 1953, and when he came back to work on his teaching certificate, he tried out for and made the cheerleading squad. He had a two-year run.

That second year was one of the most momentous in the football program’s history. Ranked No. 20 in the preseason (and unranked after their first game), the Buckeyes rose through the ranks to No. 1 — beating then-No. 2 Wisconsin on an 88-yard interception return by Hopalong Cassady and then besting Michigan on a 99-yard touchdown drive after a dramatic goal-line stand.

“I still get chills thinking about how it felt to be in front of 80,000 people who all stood up and screamed at the same time when Cassady intercepted that ball,” he said.

The 9-0 regular season got the team a ticket to the 1955 Rose Bowl. As a cheerleader, Crawford was a leader of the contingent of nearly 2,000 fans that filled six trains out to Pasadena. Even though that year’s game was played in some of the worst weather conditions in the bowl’s history, Crawford talks about that trip almost reverently. He still has the paid receipt for the $176 it cost him for the train ride and four nights’ lodging in California.

Crawford’s home-game string started innocuously enough. Tickets were easy to come by during a rough ’43 season, and his father decided to take young John, then 12, to see the Buckeyes play Northwestern (and Otto Graham). For the next couple of seasons, he took a job selling newspapers on the streets, and customers gave him tickets every game day. Later, he sold soda pop in the stadium, lugging glass bottles up and down the aisles for $1 per case sold (sometimes less if he was working for an unscrupulous boss). “It was hard work, but it got me in the stadium,” he said.

He got student tickets while he was enrolled, and he bought staff tickets for several years while he worked as on-air talent for WOSU-TV. He’s purchased alumni tickets every year since, and the Homecoming game against Maryland on Oct. 10 will mark the 446th consecutive home game he’s attended.

“I’ve just always tried to keep my fall schedule as clear as I can,” he said. “Sometimes that’s easier than it is other times, but I didn’t marry Harriet until I was 42. That was 1973, so I only had myself to schedule up until then.”

Of course, the streak almost ended numerous times. In fact, it was in danger the first game after that Rose Bowl. After he earned his teaching certificate and left school, he was drafted into the U.S. Army. But only a few months in, he had a severe asthma attack at Fort Knox and was discharged before the 1955 opener.

In 1992, his nephew (an Ohio State grad as well) was getting married in New Jersey only hours after the Michigan game. But rather than break the string at 292 in order to get there by conventional means, he accepted a local TV station’s offer and took a helicopter and limousine to Port Columbus airport in time to make his flight for the wedding.

In 2006, with his knees deteriorating and the string closing in on 400 games, he almost ended it because it was too painful to walk. It was the first time he ever took the stadium elevator to C Deck, and that let him put off double-knee replacement until after the season.

“I’ve had to be lucky with my health and with circumstances, but it all has worked out,” Crawford said. “I feel blessed that I’m still able to get there and blessed that I still feel like I want to.”

Origin of an anthem