This ‘Fourth-of-July kind of guy’ — a loyal marching band alum — is Ohio State through and through.

Mardi Taylor’s family is teeming with Buckeyes: She has nephews, a parent, a grandparent, siblings and in-laws who are alums. She came within 20 hours of graduating herself, but finished her degree on the West Coast. Yet according to Mardi, there is one “proudest Buckeye of them all,” and that is her brother Bob Noble. Mardi wrote about Bob for her writing group, and other members encouraged her to submit it to Ohio State Alumni magazine. “He would never write about himself,” she said, but she wanted to convey the effect Ohio State had on Bob’s life. And when she sent us her story, we agreed Bob’s tale was worth telling. 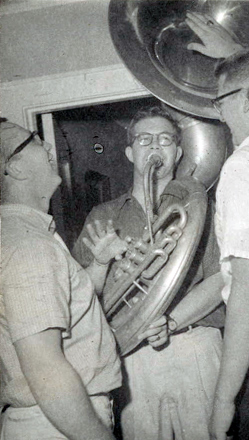 Bob Noble, shown in college with his trusty sousaphone, graduated from Ohio State in 1959.

A big, booming, Fourth-of-July kind of guy, my brother Bob is the oldest son of my mother, Mary Louise Pfening, and her first husband, James Paul Noble. Born in 1937 into a military family in a small Midwestern town draped in red, white and blue, and having a World War II boyhood, Bob absorbed the values of sacrifice and love of country. As a major in the U.S. Army Corps of Engineers, his father moved the family around the Midwest. When his parents divorced, Mom moved Bob and his brothers to Grandview Heights, Ohio, to be near grandparents.

When I was a baby, our age difference surprisingly bonded us. Bob and his girlfriend, Tammy, were planning to marry and have a family. They would push me in my stroller and pretend I was their baby. When I was a preschooler, Bob always seemed to be on the go. He worked his way through college, dated Tammy, joined a fraternity and played in the Ohio State Marching Band (as well as a combo).

As a young child, Bob loved music and began playing piano. In the fourth grade, he learned trumpet and sousaphone. As an eighth-grader, he played sousaphone in the high school concert band. And by ninth grade, he was bass horn first chair. A framed John Phillips Sousa portrait was displayed in his room. The sousaphone and the tuba — big brass bass horns — were so right for my big, loud brother. In junior high, he learned string bass, a gift from Grandad Pfening.

Bob played string bass well enough that his Tau Kappa Epsilon fraternity combo won an Ohio State music contest. The crowd lingered for an hour afterward to hear his group play “Sentimental Journey” and other popular songs of the ’50s. His college concert band did sophisticated pieces and premiered works. And he was good. But Bob chose to sacrifice his music dream of attending The Rochester Institute of Music for his family dream of studying at Ohio State and marrying his sweetheart.

During his senior year at Ohio State, Bob “dotted the i” in the legendary Script Ohio at the Michigan game. This seed had been planted early.

It was in elementary school when learning to play sousaphone that he went to an OSU-Michigan game. Sitting in the first row of C Deck in Ohio Stadium, Bob saw the band perform Script Ohio and said, “Someday I want to do that.”

Years later, Mom tipped off a reporter from the Columbus Dispatch about a little boy who wanted to “dot the i” one day during the Michigan game and grew up to do it. On the Friday before the game, Bob’s story was in the lower left corner of the paper’s front page. Then, Sunday after the game, his photo appeared in the same spot with the simple caption: “He made it!”

For Bob, that Michigan game moment lingers as one of life’s sweetest memories. He was proud to be one of about 800 sousaphone players selected for this honor in the 80 years of Script Ohio. These musicians exemplified the band’s high standards.

As planned, Bob graduated with a bachelor’s degree in business administration, married Tammy and had a family. For years after graduation, Bob attended Buckeye football games, wore university baseball caps and golf shirts, made sure everyone in the extended family had scarlet-and-gray sweatshirts and placed an Ohio State welcome mat at his front door.

Bob became a community leader. He served as vice president of Unisource Paper Co., president of The Columbus Junior Chamber of Commerce (JAYCEES), chair of the Board of Franklin County Developmental Disabilities, director of Upper Arlington Bear Cub Baseball and parade marshal for the Upper Arlington Fourth of July Parade one year.

Although he’d never say so, Bob brought the Ohio State standard of excellence to every organization he touched.

The marching band became part of his heart and soul. Recently over the phone, he cited his favorite marching band piece as Le Régiment de Sambre, a French funeral march played during Script Ohio.

He also quickly rattled off his favorite band keepsakes: “A box frame with marching band mementos, my band letter, patches from my uniform, the plume from my hat and the mouthpiece from my sousaphone.” I could sense he was smiling as he described them.

“Today’s band is twice as big as ours was, but we did the same kind of fancy marching formations they do and without the help of computers,” he said with pride.

As an adult living in Seattle, I find it incredibly exciting to behold “Script Ohio” as the band starts that strong 4/4 beat and flows into the script letters. Then the senior sousaphone player leans back to high-strut to center field for a moment in history. Just like my big brother Bob.

Community vs. a crowd