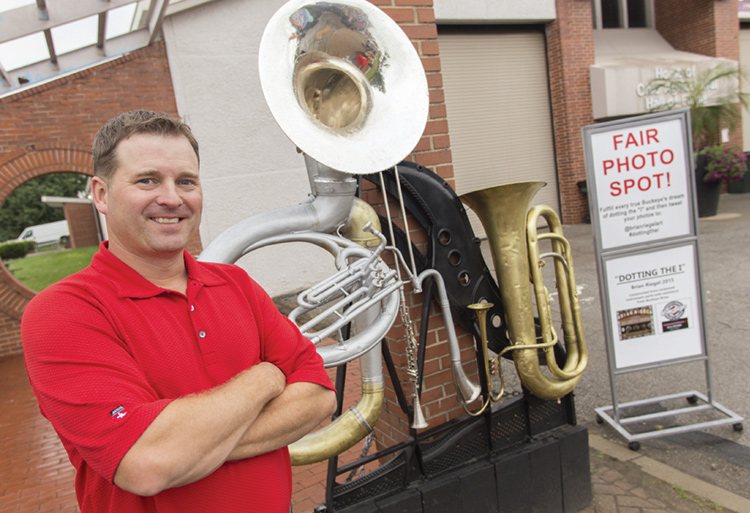 Artist Brian Riegel stands alongside his artwork, made from old instruments, at this year’s Ohio State Fair. You can pose with it in the Ohio Union through the end of football season.

Life-sized figures of Urban Meyer and Brutus, carved in butter, weren’t the only Buckeye icons on display at this year’s Ohio State Fair. An image of Script Ohio, assembled by artist Brian Riegel ’94 from reclaimed brass instruments, also grabbed the attention of fairgoers.

The sculpture invited patrons to stand inside its sousaphone and imagine being The Ohio State University Marching Band’s honorary “I”-dotter. The piece can be seen in the Ohio Union through the end of football season.

Riegel makes everything old new again with works that reconfigure outdated or discarded parts from nearly any object into wall hangings and other aesthetic designs.

His creations have been viewed nationally and regionally in shows, competitions and business offices and purchased by collectors. Most recently, Ohio State hired the Worthington, Ohio, native to create art for the exam rooms and some common areas of The Jameson Crane Sports Medicine Institute now under construction.

Where did you come up with the idea of creating a Script Ohio image out of all-brass musical instruments?

I thought this would be something my mom would enjoy. She is a huge Buckeye fan who began taking me to football games as soon as I could walk. She taught me at an early age that you don’t leave for the concession stand at halftime. You stay in your seat and watch the band.

The piece was something I have been thinking about for quite a while. When the fair made a call for outdoor sculptures, it gave me a reason to do it. Ohioans love their Buckeyes, and I wanted a subject matter that would resonate with them. I have received lots of responses about it on social media. I’m hoping a business might want this for their office, because I don’t have room for it at home. It’s about seven feet tall — the largest sculpture I’ve done.

How deep is your connection to the university?

[Former President] Gordon Gee talked about me as a fifth-generation graduate during spring commencement at Ohio Stadium in 1994. I never thought about going anywhere else. Now my 13-year-old daughter is talking about going to Ohio State.

Why did you decide to pursue this style of sculpture?

As a child from the suburbs, I was enamored with the “junk” on my relatives’ farms. I watched my Uncle Gregg transform discarded items into parts for other uses. I learned to see past an object’s purpose to appreciate its beauty, form and mystery.

You mention that many people have an emotional response to your pieces. Why is that?

My art is nostalgic because viewers recognize familiar items from the past, yet see them in an unfamiliar way. Lately, I have been working with a lot of musical instruments. Clients have told me that they remember the music each time they walk past a piece made from their old instruments.

What are some of the most unusual pieces you have worked with?

When my wife was pregnant, she had a thing for pistachio nuts, so I made something out of the shells.

You recently left teaching in Worthington City Schools after 20 years to pursue your art fulltime. How difficult was that decision?

I always was encouraging my high school art students to pursue their art and decided I needed to put my money where my mouth was. I got a master’s in studio art from the University of St. Francis in Fort Wayne in 2011, and my work just kind of took off from there.

What will you create for Ohio State’s new sports medicine institute, slated to open in 2016?

I’m making 40 pieces from 20 different designs, each of which will represent a different sport. I’ll be working with sports equipment and archival photos donated by the university. My wife is excited because I’m getting a commission.

Get up and MOVE