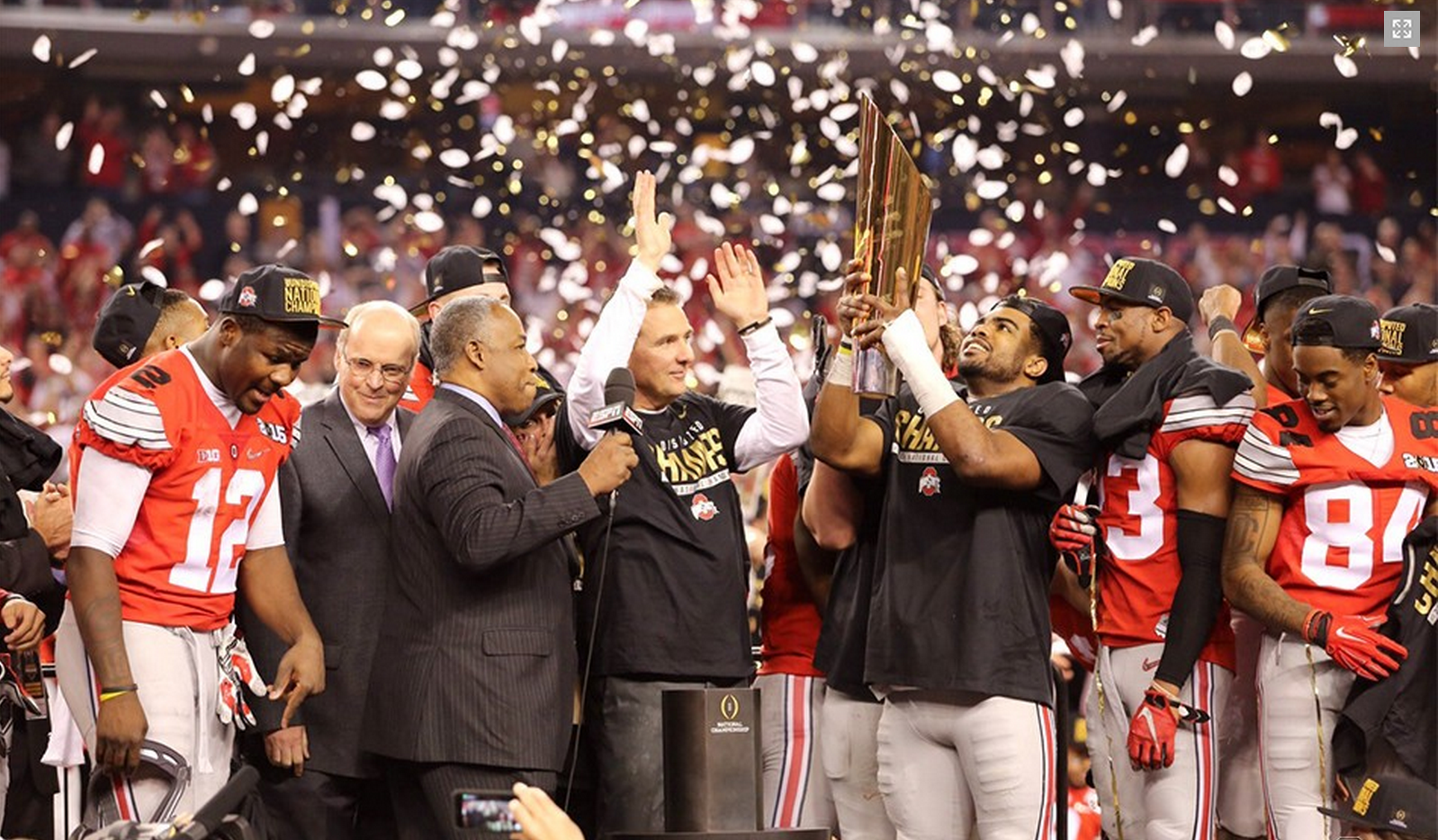 The Buckeyes won the university’s latest national championship in football earlier this year. Which number it was depends on who you ask.

When Ohio State defeated Oregon to win the College Football Playoff National Championship in January, the university described it as the Buckeyes’ eighth title. At the same time, the Associated Press described it as Ohio State’s fifth championship and the Columbus Dispatch as the Buckeyes’ sixth. For a sport so steeped in tradition and history, how can it be so difficult to pin down the correct number? How is there even a debate?

In truth, before this year’s first-ever playoff, determining a national champion had been an inexact science at best — decided in the minds of observers and not on the field of play. The AP, for example, named its champion via a poll of sports writers and broadcasters; other organizations and even some individuals always had their own methods (and timing) of choosing a champ. As a result, often two, three or as many as six teams have been named national champ by one organization or another in a given year.

Observers began to talk often about finding a national champion at the turn of the 20th century, but the idea remained more an amusement than anything else. Where no formal title structure existed, observers began to very literally invent the national championship. The 1920s through the 1940s saw a surge of “selectors” emerge: media members such as AP, individuals such as Frank Dickinson and football appreciation groups such as the National Football Foundation. Selectors simulated a national championship through opinion polls or more scientific criteria. More often than not, these outlets disagreed, producing a “split” national title.

Recent narrative seems to assume the absence of an official title-awarding structure before the advent of the playoff or its predecessor, the Bowl Championship Series, was because of the “greed” of bowl committees or television executives. In truth, the reason lies in geography.

In the late 1800s, college teams organized themselves along regional lines. They set up leagues with other nearby schools, producing rivalries in regions or states. Teams came to approach each season with the goal of being crowned “champion” of the East, Northeast and so on. Ohio, for instance, had its own hotly contested championship race among the likes of Oberlin, Kenyon and Ohio State. So the early game was solely oriented toward regional superiority.

Given the immense importance put on bowl games now, divorcing the national championship from postseason play seems absurd to today’s fans. However, the historical context of college football in the mid-1900s tells us that such a division was common.

Bowl games, beginning with the Rose Bowl, evolved as a reward for an already great season rather than the climax of a team’s year. That’s why even through the 1970s, selectors not only disagreed about the weight of postseason contests, some discounted them entirely.

Woody Hayes, for instance, made no bones about the importance of winning the Big Ten above bowls and national accolades.

So it wasn’t surprising that the Football Writers’ Association awarded the 1961 national title to Ohio State despite the fact that the Buckeyes turned down their invitation to the Rose Bowl based on a faculty decision. (Faculty members were weary of the emphasis on sports.) And when the National Football Foundation named Ohio State its champion after a dominating win against Michigan in 1970, it didn’t flinch when the Buckeyes lost to Stanford in the Rose Bowl. Historically, the college football scene allowed that kind of latitude.

So, just as the press can pick and choose which selector matters more in a given year, universities have done the same. Of course, Ohio State is only one of many teams that have dynamic national title records. Be that as it may, the 2014 Buckeyes lay claim to the first title won within a nationally organized structure. As for the titles that came before it, that debate will probably never end.

Keith Aksel ’09 is pursuing his doctorate in history at the University of Colorado and writing a book on college football history. He also is lead editor for a new sports history website, The Tattered Pennant.

Get up and MOVE