Barbara and Jack Nicklaus lead the effort to fund a scholarship for every TBDBITL member.

With a full load of classes and at least 30 hours a week devoted to marching band each fall, sousaphone player Anna Hurley can’t imagine how she’d accommodate a part-time job to help cover college expenses — “unless I want to work at 4 in the morning.” Besides, on Saturdays when there’s a noon game at Ohio Stadium, that time slot is already taken.

A third-year student majoring in city and regional planning, Hurley rises those days at 3:45 a.m. to begin a ritual that ensures she’s in place for final rehearsal six hours before kickoff. “I always tell people that I give myself enough time for the world to end twice and still make it to the stadium on time,” she says. “Those are long days.” (Up to 12 hours long, in fact.)

Now in her third year with the band, Hurley says without the scholarships she earned this year and last, she wouldn’t be spending spring semester in Copenhagen.

“It’s essentially a chance for me to go to a city that we use in case studies all the time and experience it firsthand,” she says, noting the Denmark capital’s record on sustainability makes it a desired destination for students like her.

“Scholarships offer opportunities to do things beyond the average college experience,” Hurley says. “For me, it’s helping me study abroad. For someone else, it might mean being able to accept an internship or take a semester off to pursue an artistic endeavor.”

For drum major John LaVange, a senior finance major who’s accepted an offer to step into a job at Key Bank after graduating in May, scholarships have eased his college debt burden.

“It’s allowed me to have a sense of financial relief personally,” says LaVange, whose fall band responsibilities consume 25 to 30 hours of his week. (Drum majors have a three-season commitment that includes tryouts in the spring; training in the summer, including working with candidates for the drum major training squad and high school drum majors; and a rigorous set of practice and game commitments in the fall.)

“To have a part of the stress minimized by the generosity of those who have come before is truly a blessing.” 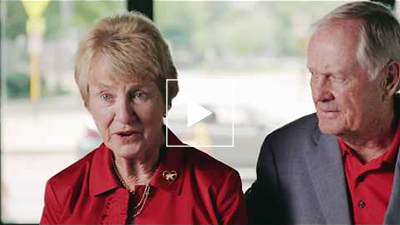 Jack and Barbara Nicklaus reflect on their connections with TBDBITL, including Jack’s dotting of the “i” in 2006.

Extending that blessing to the more than 200 students who constitute The Best Damn Band in The Land is the goal of the 100% TBDBITL campaign, which seeks to raise $10 million by the close of 2018. To recognize band members’ contributions to the life of Ohio State, the university has pledged to match the first $6 million raised.

If the drive hits its mark, each current and future band member will receive an annual scholarship of at least $3,000.

“Every day, I see how tirelessly our band students work, and I know the sacrifices they make to be part of our tradition of excellence,” says Christopher Hoch, director of the marching and athletic bands. “We’re unbelievably blessed to have so much support from our alumni and fans. Every time we take the field to perform, we hope to do them all proud.”

Those supporters include a pair of well-known Buckeyes: Jack and Barbara Nicklaus, honorary co-chairs of the campaign and admirers of TBDBITL even before they met as first-year students in the 1950s.

“We both grew up in Columbus, so Ohio State and the marching band have been a part of our
lives forever,” says Barbara Nicklaus ’61. “Once you delve into how many hours a week the members work to be able to perform, you realize each one them is deserving of a scholarship. I mean, there’s no way they could have an outside job.”

The marching band, Jack Nicklaus adds, “is part of the excitement and passion at Ohio State and very much a part of its tradition.”