Where I live: Washington, D.C.

After earning their degrees in America's heartland, many Ohio State alumni migrate to the U.S. capital. Here, they find the blossoms pink, the museums free and the politics avoidable (to an extent).

In a city known for its marble monuments and even rockier politics, delicate pink petals have a way of bringing people together. Buckeyes say nothing tops cherry blossoms in the spring in our nation’s capital, and they’re here to share some of their favorite petal-peeping places.

“People just kind of descend on the city. It’s pretty fascinating to see,” says Jenn Rubenstein ’04, vice president of the Washington, D.C., Alumni Club. “Everyone’s just walking around looking up with these smiles on their faces. It really is pretty incredible.”

This year’s National Cherry Blossom Festival is March 20 through April 15, but weather will have the final say in how grand a show the trees put on — and when.

“One morning a year, I like to drag myself out of bed early and try to beat the crowds, which I never quite can,” says Katy Hogan ’11, ’13 MPA, program manager for the John Glenn College of Public Affairs’ Washington Academic Internship Program. Still, even though she has to share her view with other early birds, that sunrise bike trek to the Tidal Basin, center stage for the festival, is dazzling.

Pam Tapscott-Lassiter ’80, president of the university’s Black Alumni Society, doesn’t even need to have her feet on the ground to be impressed. “If you’re flying into D.C. during that peak time, to look out of the plane and see that, it’s absolutely breathtaking.”

While Rubenstein likes the people-watching opportunity in the heart of the district, she is just as happy to take in the blossoms on her parents’ street in Fairfax County, Virginia.

As much as these Washingtonians cherish their cherry blossoms, wherever they find them, they also consider the city’s multitude of museums a treasure. 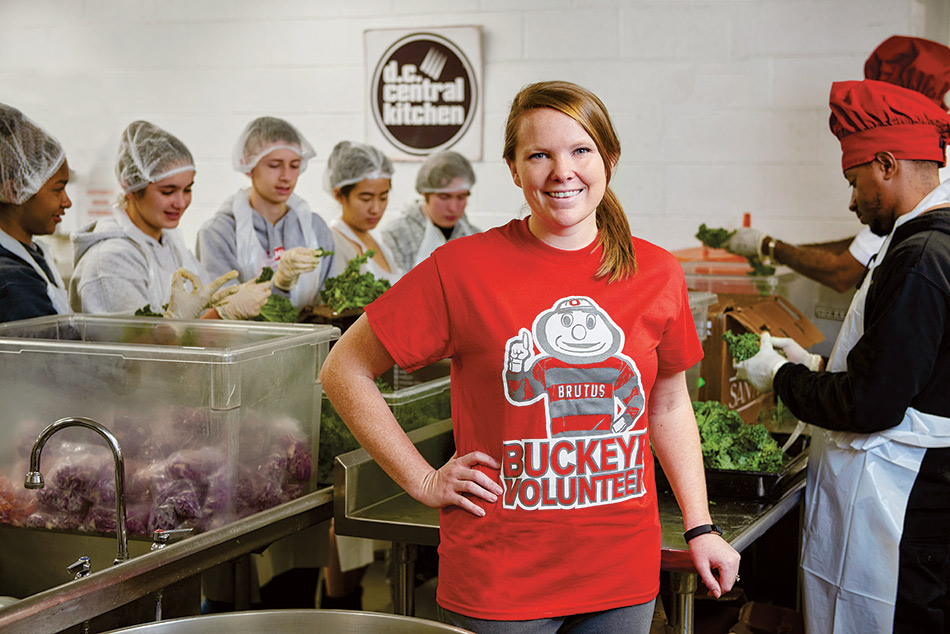 As a member of the Washington, D.C., Alumni Club, Katy Hogan '11, '13 MPA is a frequent volunteer at D.C. Central Kitchen, a community venture she also introduces to Ohio State interns on assignment in the nation's capital.

The hottest ticket in town remains the National Museum of African American History and Culture. Like the city’s other 16 Smithsonian Institution museums, this one is free, but its timed passes are hard to come by. Anyone with a military ID can get in without a wait (just one example of how friendly D.C. is to service members, says Tapscott-Lassiter), and others can secure passes through the museum’s website.

The National Air and Space Museum on the mall is one of the most iconic, but Rubenstein also recommends checking out its second location, the Steven F. Udvar-Hazy Center, near Dulles Airport. It includes hangars that house the Space Shuttle Discovery and a Concorde.

“There’s just a museum for everything,” ­says Tapscott-Lassiter, who works in the telecommunictions field. “They just opened one for the Bible.”

Living in Washington, D.C., is not all blossoms and museums, but it’s not all politics either.

“You would be surprised how many people who are in D.C. who, I wouldn’t say are apolitical, but aren’t necessarily involved as a lobbyist or working for a politician or in that political climate,” Brown says.

That said, Rubenstein has friends from across the country who scramble to get to Washington for “once-in-a-generation, once-in-a-lifetime” events such as marches and announcements of major U.S. Supreme Court decisions. Meanwhile, she says, “I’m like, ‘Oh, I figure I’ll stop by the Supreme Court and then head into work,’ and still get into work on time.”

And, says Hogan, you never know who you’ll meet along the way. “One time, I almost physically ran into John McCain when I was rounding a corner near Capitol Hill.” Another time, she had the “surreal” experience of dining in the same new noodle restaurant as then-first lady Michelle Obama.

Washington, D.C., might be the capital of the United States, but Howard Biel calls it an international city. One of the best ways to partake in what he describes as a "cultural exchange" is to explore the city's plethora of restaurants.

“Name a kind of food, and I can name a restaurant,” Biel says, anywhere from Koreatown to the 14th Street corridor, which draws a lot of young people. For “unbelievably great pizza,” Biel heads to Il Canale in Georgetown. Il Canale’s secret is protected by the Italian government through the Associazione Verace Pizza Napoletana (True Neapolitan Pizza Association), which defines and cultivates the culinary discipline of the Neapolitan pizza.

“Ethiopian food is great in D.C.,” notes Katy Hogan. “I think a classic one may be Dukem on U Street,” which features musicians performing traditional Ethiopian music.

Hogan also likes St. Arnold’s, a Belgian restaurant with two locations in northwest Washington. “They have all kinds of Belgian beers, and then you can get mussels and fries.”

Perhaps because his work often takes him to east Africa, Andrew Brown is partial to a Rwandan coffee shop near his office, Bourbon Coffee on L Street NW. He also spends time at Juan Valdez Coffee, a Colombian shop, on F Street NW.

Of course, Washingtonians don’t have to look farther than their own backyard for good food. “On the higher end, there’s a place called the Dabney,” Brown says. “I like it because it’s locally sourced ingredients. They’ve got this big wood-burning oven, “so it’s a great place to go in winter or fall.”

And nothing could be more American than the Teddy & the Bully Bar near Dupont Circle. “It’s a sit-down restaurant, but they have a good happy hour. And it’s Teddy Roosevelt-themed,” Hogan says. “It feels a little like something you wouldn’t see in another city.”

D.C. in a nutshell

The Library of Congress contains more than 164 million items, from books to sheet music. It adds more than 12,000 items daily to its collections, housed on more than 838 miles of bookshelves.

From Afghanistan to Zimbabwe, about 200 embassies are located in Washington.

Connect with an alumni club or society where you live.