Rise and shine with Ryan Day

Nixing a national search, Ohio State promoted assistant coach Ryan Day to succeed Urban Meyer, considered among the best coaches in the football program’s 129-year history. Day knows the shoes he’s standing in are big, but he’s been growing into them all his life — as a child mentoring his brothers after their father died, as an inclusive teammate on squads from T-ball to college football, as dad to three kids, as an assistant for 17 years in the college and NFL ranks. With the spring game fast approaching and fall season close behind it, Day is up to the challenge. He’s been preparing for most of his 40 years.

Strangers in scarlet and gray approach Ryan Day as if duty-bound by a new era.

As he and his family head to their Schottenstein Center seats to watch the men’s basketball team play Michigan State, Day instead finds himself on display.

Fans point phones in his direction for photos and offer a stream of handshakes, pats on the back and words of encouragement. An otherwise normal Saturday afternoon in January becomes a bit of a public event because it is Day’s first official week as the Buckeyes’ football coach.

“We went to a couple of games last year and kind of just walked in and sat down,” says Nina Day, his wife. “This time was totally different. We couldn’t really even walk without people coming up to us.”

The family has no complaints, only adjustments to make after Day toiled mostly in the shadows as an assistant coach for 15 years at universities and two years in the NFL. He has wanted to be a head coach all his life, and suddenly he’s leading one of history’s most storied programs, one humming with unprecedented success thanks to his legendary predecessor. Day understands and accepts that endless public scrutiny is part of the job, and he realizes it has thrust Nina and their children — Ryan, 10; Grace, 7; and Nia, 5 — into this new world with him.

“You’re an ambassador for the university, and it’s great,” says Day, an Ohio State offensive coach the past two seasons. “We love it, but there’s a lot that goes with it. It’s a sacrifice for the family as well as being very, very exciting. Life as we know it is different now.” 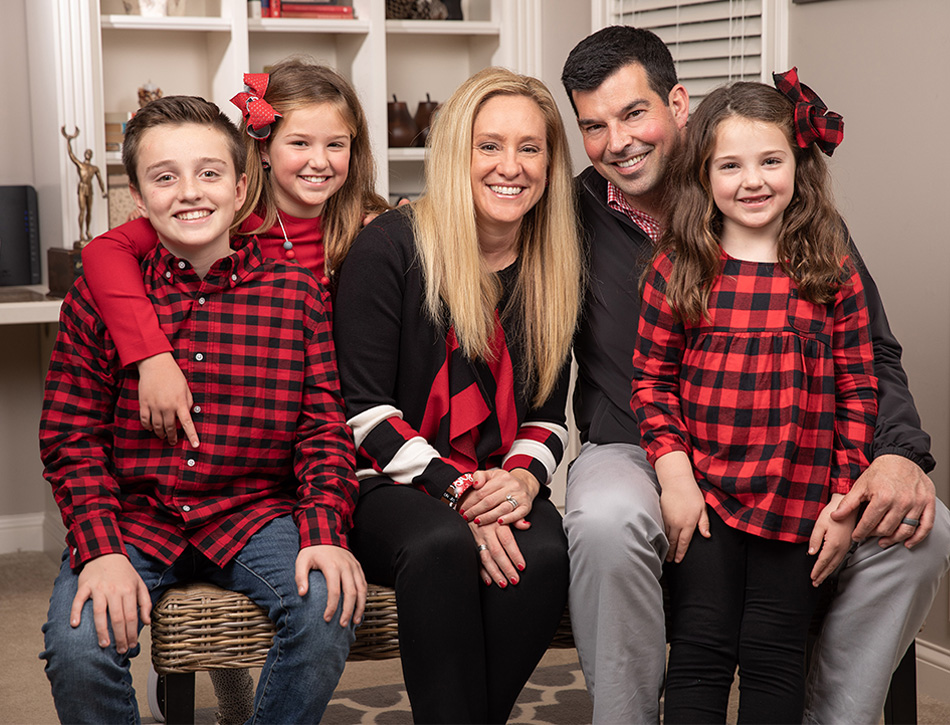 The Days — from left, Ryan Jr., Grace, Nina, Ryan and Nia — share a tight bond, having moved from Boston to Philadelphia to San Francisco to Columbus since 2014. “We’re a very close family,” Nina says.

Times are different for Ohio State fans, too. Urban Meyer produced the best winning percentage (.902) in program history, a 2014 national championship and a 7–0 record against Michigan during a seven-season run that ended with his retirement, capped with a Rose Bowl win on New Year’s Day. Meyer built upon the tradition honed by the incomparable Woody Hayes and nurtured by Hall of Fame coaches Earle Bruce, John Cooper and Jim Tressel.

Now comes Day, a native of Manchester, New Hampshire, who turns 40 this spring and has never been a head coach at any level. He must make certain that all the arms spread open to welcome him don’t remain so because of exasperation over losses.

“I understand what the expectations are, and I wouldn’t want it any other way,” says Day, who was named Meyer’s successor December 4 and officially took over January 2. “We have the resources that we need. We have the people. You feel the support and how they’re going to do everything that they can to help the program do well and succeed. Now you just go about the business of building the atmosphere that you want as a leader and lean on the support and resources that we have here.”

We love it, but there’s a lot that goes with it. It’s a sacrifice for the family as well as being very, very exciting. Life as we know it is different now. Ryan Day

Meyer has repeatedly called Day an elite coach because his football acumen is complemented by astute leadership and an engaging personality. Those traits impressed athletic director Gene Smith when Day went 3–0 as interim head coach at the start of the 2018 season while Meyer served a three-game suspension. His holistic coaching style left a positive mark on Dwayne Haskins that goes beyond the records the quarterback racked up last season while becoming a Heisman Trophy finalist under Day’s tutelage.

Creating that type of bond among team members is Day’s core coaching tenet, and he says the principle stems from how he was raised. His father died when Ryan was 9 years old. “I had to grow up quickly,” Day says. While his mother worked, Ryan took to being a leader for his two brothers. He credits his grandfather, Paul McGaunn, for serving as his family’s stabilizing force.

The neighborhood provided extended support, especially the family of Stan Spirou, whose daughter Nina played T-ball with Ryan when they were 6. The two grew up within a mile of each other, went to high school prom together and dated at the University of New Hampshire. They married in 2005 while Day was a graduate assistant for Meyer at the University of Florida, a position he accepted after earning his master’s in administrative studies at Boston College. 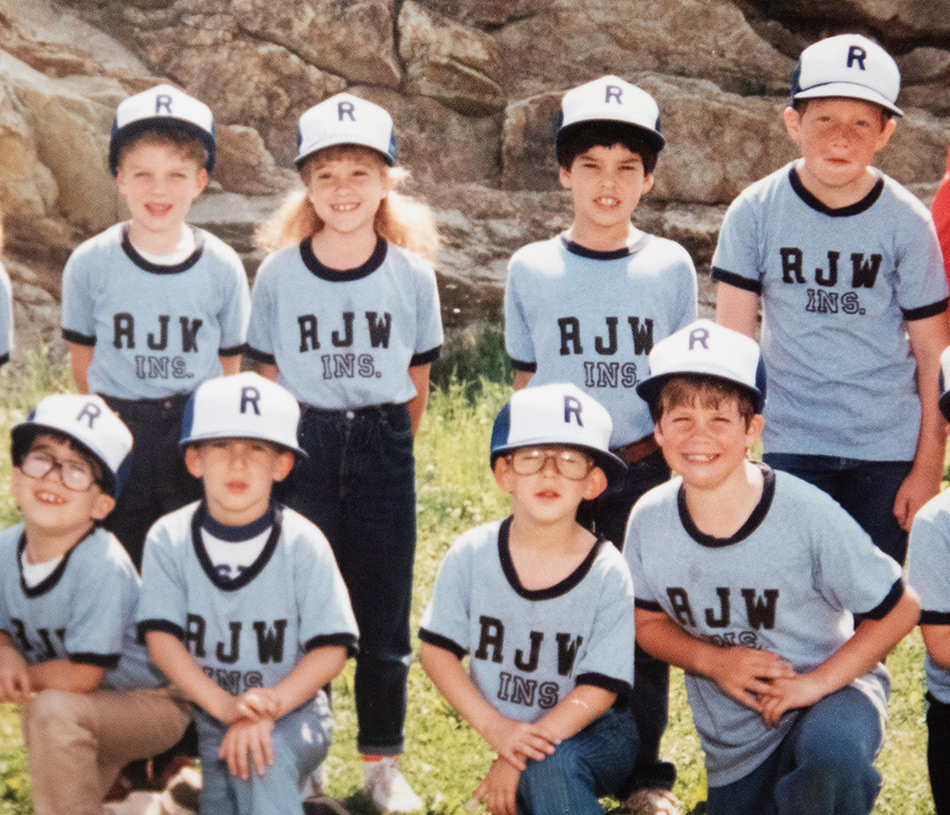 Nina and Ryan, standing side by side in the middle of the back row, first met as T-ball teammates. “I tell Ryan all the time that Nina was the better player, but he denies it,” says her father, Stan Spirou. 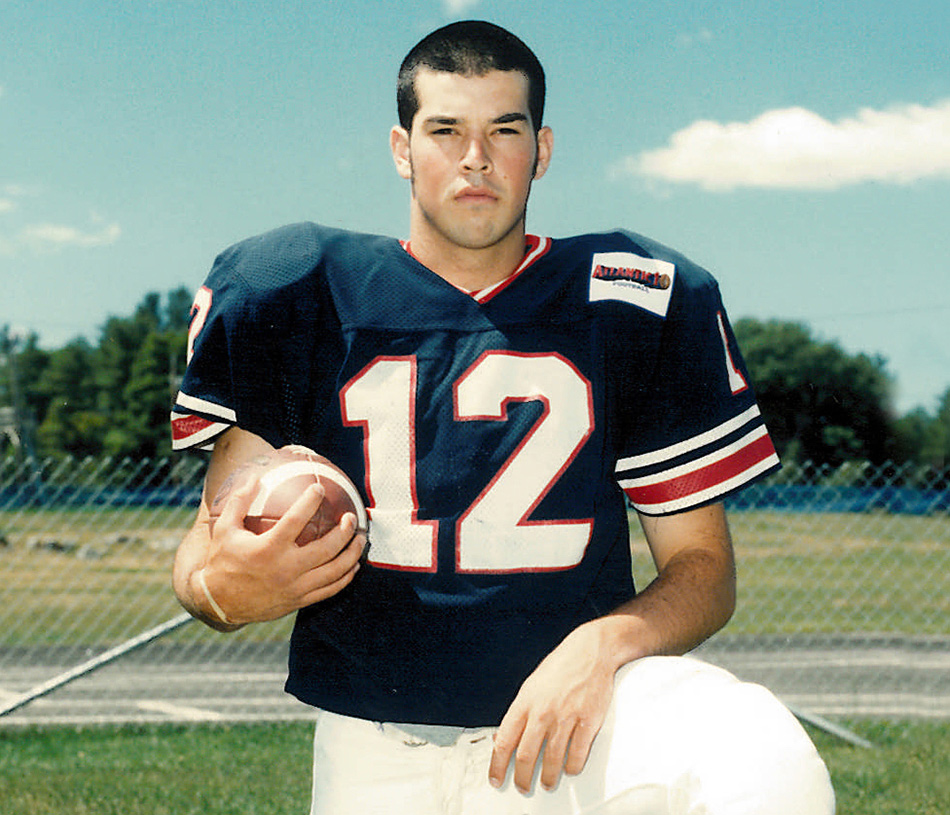 Day set nine University of New Hampshire records as a three-year starter at quarterback. “He was very confident, but in a very good way,” says his college coach, Sean McDonnell.

“There’s nothing more important than family,” Day says. “In this profession, sometimes that can get lost, but I think the idea of family carries over to the team. That’s the way I am. That’s my style. I want to bring people in and have the same type of mentality here, that we are a family. We pull for each other.”

People who have known Day most of his life describe his New Hampshire hometown the same way. They say there’s a true sense of community in Manchester, a textile town built by immigrants and boasting a diverse population of 110,000.

“It’s a place that really takes care of its own,” says Day’s father-in-law, Spirou, who retired after 33 years as head basketball coach at Southern New Hampshire University. Perhaps that solidarity explains why such a small city has produced three current major college football coaches: Day, Florida’s Dan Mullen and UCLA’s Chip Kelly, who employed Day on his NFL staffs with the Philadelphia Eagles and San Francisco 49ers.

From childhood through the coaching ranks, Day valued the concept of a group striving as one for a common cause. He was captain of most of his youth baseball, basketball and football teams and became a star quarterback at Manchester Central High School — where today, students from 57 countries speak 34 different languages — as well as at the University of New Hampshire. There, he majored in business and set numerous school records as a three-year starting quarterback after beginning his career as a walk-on. 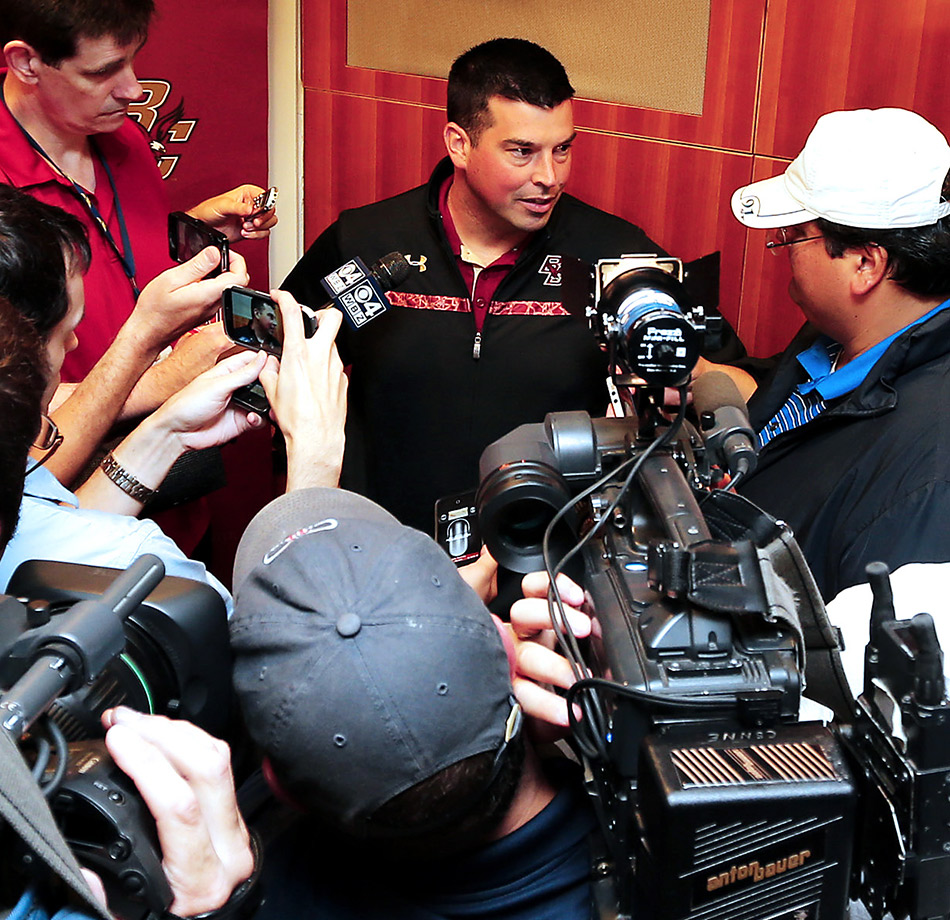 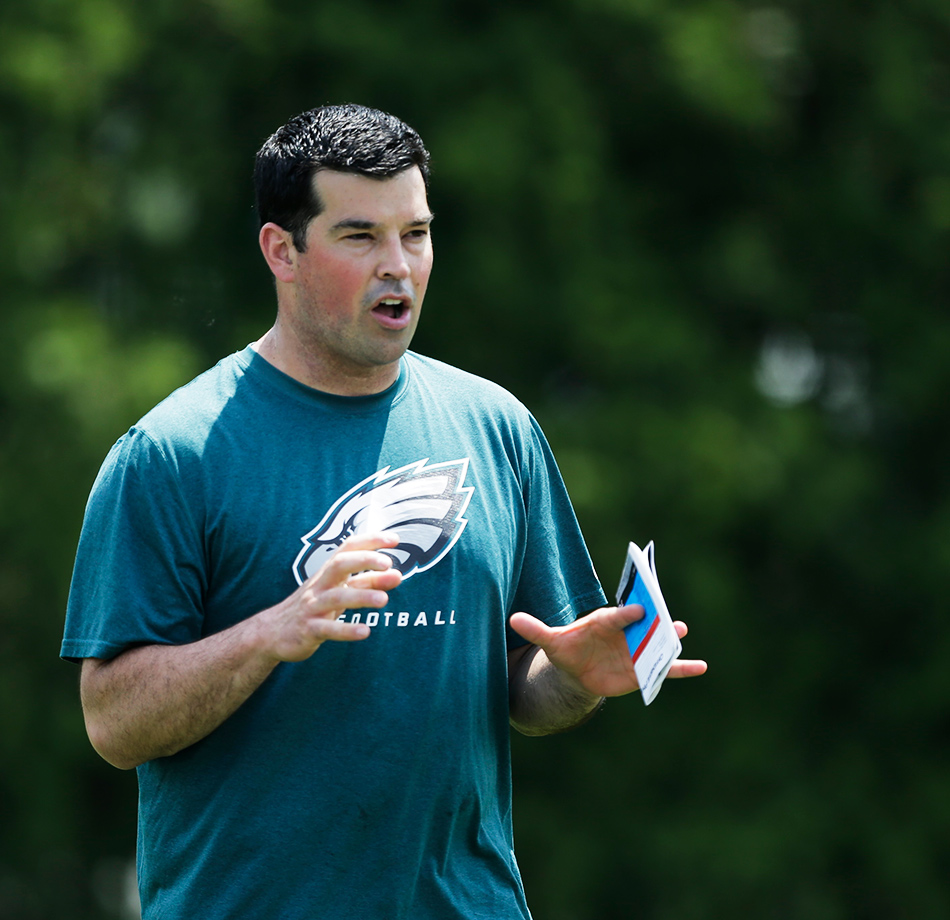 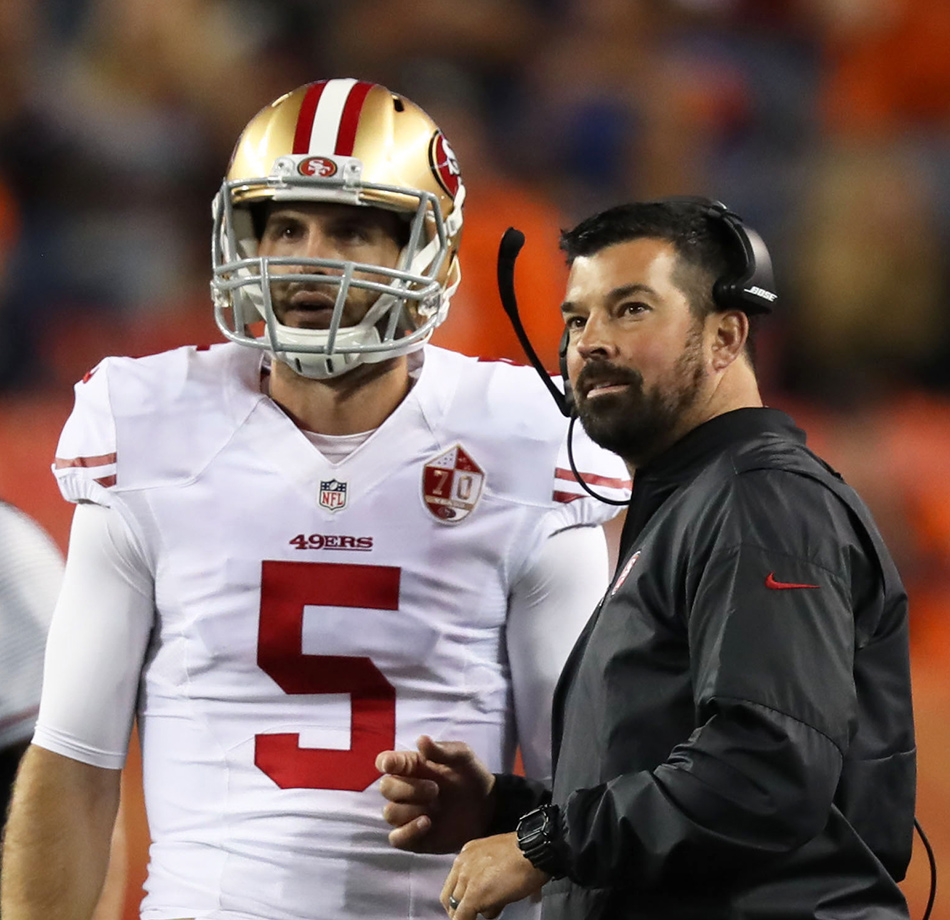 “He bettered all the kids’ attitudes, got them playing together,” says Jim Schubert, his high school football coach. “He wanted everybody to be part of the win. They gravitated to him because he was a good guy, a good teammate. Everyone liked and wanted to play with Ryan Day.”

Now everyone who follows Ohio State football will have opinions about how Day coaches the Buckeyes as they go through his first spring practices. Who is going to replace Haskins at quarterback? What about these new assistant coaches Day brought in? How would Meyer have done this, that and everything? Rinse and repeat, especially once the coming season begins. Questions will track him like a bloodhound. Day understands.

With our philosophy of the program, and the infrastructure of the program, we’ll be very careful in changing anything. The changes that we do make are going to be well thought out. This isn’t broken here. It’s going in the right direction. That’s part of the reason why this is so exciting for me. Ryan Day

Day says he’s been preparing to be a head coach all his life, a confident statement that doesn’t come off as cocky. His profile is higher, but his day-to-day challenge is fundamental: Cultivate a familial atmosphere that will help top talent flourish.

“The connection of the players and staff is really important,” Day says. “It’s like anything else in life, if you love the people you’re working with, then you’ll do anything for them. If people believe that you’ll help them, then they’ll give you the best version of themselves. I want people to walk through the doors of the football facility with excitement every day and come to work with energy knowing that there’s a great relationship here between the players and the coaches, and between the coaches and the coaches, and that this is an environment where we love these kids.”

Day acknowledges the pressure of his job, and he and Nina are adjusting to life in a fishbowl. Yet they also feel and appreciate that they’re part of a much bigger family, one often called Buckeye Nation. 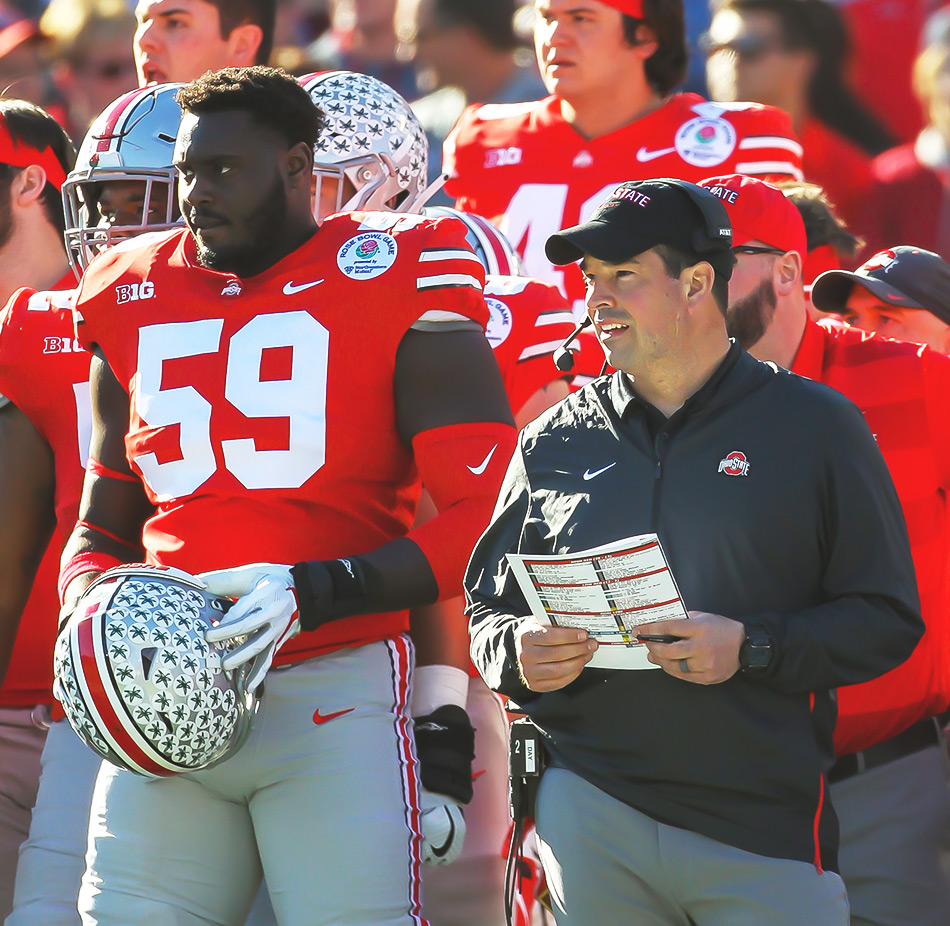 Ohio State became home for Day in his two seasons as an assistant. “I’ve fallen in love with the school,” he says. “It’s everything I thought it would be.”

“There hasn’t been a moment where we’ve felt like we’re out on a limb,” Nina says. “Everyone has just really rallied behind us. That makes a big difference when you have a whole huge group behind you making sure you don’t fail. You don’t find this in too many other places. People bleed scarlet and gray here, and they really do provide the resources and support for you to succeed. That’s why there’s been a tremendous amount of success here at all levels.”

Now it’s up to Ryan Day to continue the grand success of Meyer. He vows to fulfill expectations with a program that outworks all others, maintains the university’s reputation for class and makes everyone feel part of a close-knit family.

“I’m honored to represent The Ohio State University,” Day says. “I’m humbled to be the head coach, and I’m going to do everything I can to make the alumni and fans proud and to continue the great tradition that’s gone on here.”