The cheers for Ohio State’s victory in this year’s Rose Bowl contrast with the jeers I remember back in 1961 when the university rejected an invitation to play in the New Year’s Day football classic. The Buckeyes, under Coach Woody Hayes, won the Big Ten championship led by All-American fullback Bob Ferguson. They capped off the season by drubbing Michigan 50–20 at Ann Arbor. Woody rubbed it in by going for two points after the final touchdown.

In the polls, Ohio State was named the national football champion, and the team was invited to play in the Rose Bowl against UCLA. But the Ohio State Faculty Council voted 28–25 to reject the invitation because Ohio State was becoming “a football school” to the detriment of academics. The vote set off student protests. “Ohio State to the Rose Bowl, Faculty Council to the Toilet Bowl,” read one sign. That night protesters marched from the campus to downtown Columbus. As a student reporter on the Lantern, I went with them. When the mob approached downtown, the police were waiting. But they didn’t try to stop us. They waved us on. They wanted Ohio State to go to the Rose Bowl, too.

The protests continued a second night but grew unruly. Police finally blocked the campus entrance. Star linebacker Mike Ingram, sent by Coach Hayes to calm the situation, spoke to the crowd over a police loudspeaker: “Go home. If we can accept the decision, so can you.”

The debate over football vs. academics continued in the Lantern for weeks. When Ohio State next won the Big Ten title in 1968, the team accepted a Rose Bowl bid and beat the University of Southern California 27–16. Since then, the Buckeyes have played in the Rose Bowl 10 times, winning four of the games.

In the meantime, academics at Ohio State have risen to high levels. Some observers say the rise began after Ohio State took a stand against the domination of big-time football and refused to send its team to the Rose Bowl. In a but-for-Ohio-State experience for me, I became editor-in-chief of The Lantern and then a reporter and editor at The Wall Street Journal for 38 years. In 1990, I was nominated for a Pulitzer Prize. Now I’m part of the vibrant Ohio State Alumni Club of the Historic Triangle in Virginia. 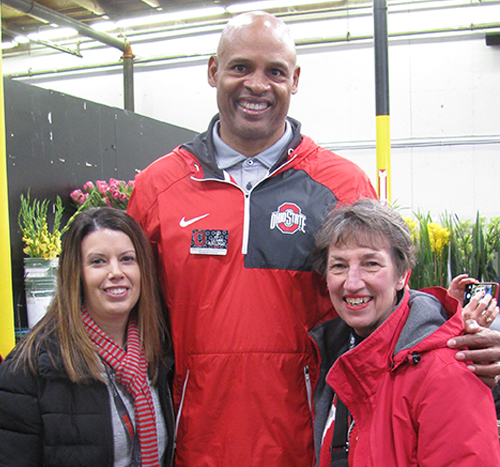 While wandering through the float barn in Pasadena on an Ohio State Rose Bowl tour, I spied Clark Kellogg ’96. He was wandering around taking photos like the rest of us. I went up to him and asked if we could get a picture with him. He said, “Sure,” put his arms around us and the photo was snapped. He was so very kind and gracious.

Clark Kellogg made such a positive impression. He is a fine representative of Ohio State, the NBA and CBS Sports, but more importantly, as a person. He stands tall, literally and figuratively.

I very much enjoyed the article on the university’s most famous playwright, Jerome “Jerry” Lawrence in the winter 2018 edition of Ohio State Alumni Magazine.

I first met Jerry during the winter quarter of 1969. He was serving as a visiting professor in the Department of Theatre for the quarter.

At the beginning of the quarter, Jerry contacted me, as I was president of the Nu Chapter of the Zeta Beta Tau social fraternity. Jerry had been an active brother and officer of the chapter during his college years, and he wanted to visit the fraternity house and meet the current brothers.

Fortunately, it turned out my fraternity brothers were able to spend many hours and meals with Jerry. His memories of college life during the mid-1930s were fascinating. His tales of his career as a playwright were remarkable.

Jerry was very proud of the university and of the lifelong friends that he made with his bothers at ZBT.

I interviewed alumnus Jerome Lawrence (Proud He’s Ours, winter 2018) for The Lantern in April 1970 about his time at Ohio State and the on-campus premiere of his new work, “The Night Thoreau Spent in Jail.”

When I asked how to start writing a great play, he said, “Get up very early one morning 10 years ago.”

That lesson about preparation and perseverance has stayed with me all these years.

A lesson in advocacy

The feature on Cat Packer (In a Day’s Work, winter 2018) warmed my heart. Cat did, indeed, begin her Ohio State career as a senior in high school in 2008 in a program called Seniors to Sophomores, or S2S. Then-Gov. Ted Strickland and Ohio Board of Regents Chancellor Eric Fingerhut accepted proposals for a new “early adopters” program that went well beyond post-secondary options and permitted high school seniors who met the criteria to skip their senior year in high school to attend college, on campus and full time.

Columbus City Schools, working with six area higher education institutions, won a $97,000 state grant to be an early adopter of the program. Our first cohort of 25 students enrolled in various area colleges for fall 2008, with Cat among them. She met Ohio State’s rigorous enrollment standards and stood out even among an entire group of elite standouts from 10 Columbus City Schools’ high schools. Cat enrolled in regular university classes, and neither her classmates nor her professors were aware of her status as a high school senior. She proved, on her own merits, that she could compete in college a year before graduating from high school.

Columbus City Schools, like most urban school districts, is rarely acknowledged for its admirable work with a challenging student population; urban school students too often are overlooked and dismissed. Then-Superintendent Gene Harris insisted that our students have the same opportunities as every other school district’s students when we could provide such opportunities. It makes me proud to have worked under her as director of special projects and won the early adopter grant in collaboration with my colleagues in the Columbus Higher Education Partnership. Along with Columbus teacher Bruce Green and Nancy Nestor-Baker, director of Ohio State’s P–12 program, we helped set Cat on her road to success, guiding her through her first year at Ohio State. Throughout that year, Cat had a firm grasp of where she was headed, and she followed through brilliantly.

It comes as no surprise to me that Cat, at age 27, earned advanced degrees and now is responsible for, in the alumni magazine’s words, “leading the regulation of Los Angeles’ new legal marijuana market, possibly the world’s largest.” It is a lesson to all educators everywhere to expect and then support the aspirations and best efforts of every student, regardless of where they come from. Cat is a perfect example of the synergy of our first S2S cohort. But then, she is remarkable on her own!

I received my latest alumni magazine today and once again am amazed by the outstanding quality and excellence of each issue. My scarlet and gray pride increases as I read each article and marvel at the accomplishments of our alumni. We honor them, and rightfully so. They were disciplined, dedicated and devoted to achieve their dreams and, often, to dream new dreams.

I, too, was a dreamer. Regrettably, I and many who walk across the Oval were not as dedicated, disciplined or devoted to our dreams, even though we had them. It took time for us to grow up. We did just enough to graduate. I did not appreciate nor access all the university had to offer me from 1970 to 1974.

My dad’s education ended after his eighth-grade year. His dreams were not like mine at all. He lived through two world wars and the Great Depression. He led a very quiet life. His dreams were simple: Have a good job and provide for his family. He worked swing shift in a steel mill for 45 years and raised an enormous garden to feed us and several others who shared the bounty. Years after his death, I learned how several families would not have had Christmas had my dad not provided for them. He did it quietly, with no public mention or fanfare. And perhaps best of all, he worked and paid for me to attend The Ohio State University.

So, I honor those alumni who have accomplished great things, but I also honor those who lived life in the simple lane and worked so I can call myself a proud alumnus of Ohio State.

This cake artist is the boss

The “new” magazine is as good as any commercially available publication. Outstanding.

I am sure thousands of other Buckeye alumni viewed the recent cover story about Natalie Sideserf and her husband, Dave. Writer Amy Goldwasser captured the person, the couple and the essence of what makes Natalie tick. While many Buckeyes are champions in various career paths, the ability to gaze at Natalie’s work provided an instant impression. Wow! Are you kidding me? The Cake Boss? Who? Fuhgeddaboudit! There is a new baking sheriff in town. She is a proud Buckeye, and her name is Natalie Sideserf.

It was nice to read about Natalie’s training as an artist at Ohio State and how she transitioned her structural art skills to the kitchen, television and beyond. Speaking for myself and every person with whom I shared the magazine, the center photo spread never gets old. I heard Willie Nelson sing and a two-headed dog growl, and I laughed looking at a Steve Carell who did not say a word.

Natalie, we do not know you, but you make all Buckeyes very proud!


In the letters above, “LM” identifies life members of the alumni association. For current membership options, visit osu.edu/alumni.