Dahir, named a 2016 Rhodes Scholar after graduating from Ohio State, shares her view from the other side of two years of intense learning, listening and exploring at Oxford.

It is tempting to tell the stories of our experience through a series of big events. And in retrospect, it is often easy. We take the small decisions and imbue them with meaning, and we fill the transitional periods with an intention we could not have had. In short, we tell our stories neatly. But all of us who have lived lives filled with what makes those lives worth living — the starts and fits, uneasiness, joy, leaps of faith, worry and certainty — know that we can tell those stories neatly now because hindsight affords us the gift of narrative. I’m no different, as a child of immigrants to the United States who grew up in a small suburb in central Ohio, attended The Ohio State University, found herself in Turkey on a Fulbright and in Oxford as a Rhodes scholar. The story still hardly makes sense.

The first person I called with the news was my mother. I remember saying, “Thank you.” She asked for what, and I responded, “For everything that got me here. I won the Rhodes scholarship.” I remember the sound of her catching her breath before abruptly making sure I wasn’t joking — which, in fairness, was something I would do. In that moment, however, I was serious, shocked into a serene calm. Now that the seal was broken, I found myself sharing the news with the doorman who helped me with directions earlier that day, the friends excitedly texting me, my sisters and my father, the one who believed in my ability to win the scholarship long before I did. Soon, as the news settled onto my skin, I called the fellowship office at Ohio State, thanking Dana Kuchem for her role in the process. At the end of that phone call, I felt different. It was as if her voice indicated something for me: The work had paid off. However, as I walked out into snowy downtown Chicago, I got the overwhelming feeling that the work had just begun.

The work had paid off. However, as I walked out into snowy downtown Chicago, I got the overwhelming feeling that the work had just begun. Ilhan Dahir

My time at the University of Oxford began on that note — that all of the work I had done in Ohio, all of my studies and my experience, all of the hours I spent teaching and learning in Turkey, all of it had led me there. At St Antony’s College at Oxford, I spent my days engaging with some of the sharpest minds I’d ever encountered, allowing lunch hours to turn into afternoons of debate, and spending evenings running from guest lecture to formal dinner to impromptu bachata lessons. It is for this reason that I often say my time on the Rhodes scholarship could be aptly summarized as two years of continual study. Every space was a classroom, and all of my peers were my teachers. 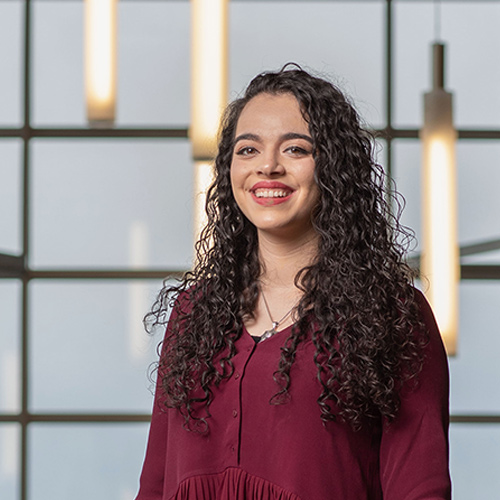 Laila Ujayli ’18 plans to complete two master's degrees during her Rhodes scholarship at the University of Oxford. Ujayli is The Ohio State University's second Rhodes scholar in the last three years.

I received two master’s degrees during that time, the master of science in refugee and forced migration studies in my first year and the master of science in global governance and diplomacy in my second. The Department of International Development became my home. The professors I met there allowed me to fully explore my areas of academic interest, and I spent my years at Oxford completing two dissertations — the first on the transnational political lives of Somali refugees in the United Kingdom and the second on state usage of geographical barriers as border control policy.

Throughout my two years at Oxford, I found myself calling upon the experience, knowledge and network Ohio State provided me; my Ohio roots seemed to deepen with distance. Whether I was debating in class or amongst my friends at a dinner that found itself stretching into the late evening, I was reminded of the teachers (both professors and peers) who guided the way, from critical theory in Denney Hall to critiques of theory at St Antony’s College. I was grateful to know that education is just a desire to learn met with the resources necessary to do that learning. This past summer, at Heathrow Airport, I prepared myself to board the familiar flight west across the Atlantic with this sentiment on my mind. I was unsure where the path would lead, but I was certain I was leaving Oxford a more curious thinker than when I arrived. Growing with the tools I gained and honed at Ohio State, Oxford widened my lens. I cannot wait to see what the winding roads ahead hold. I am just hopeful I will do some good there and heal at least a few of the wounds ailing our world.

Pro tips for planning a graduation party
Alumni association events pros dish on the good, the bad and the ugly of planning events. Mimic their successes and chuckle along with their fumbles.
Link to Pro tips for planning a graduation party
Mind wide open
Explore the life and creative process of Nancy Kramer, chief evangelist of IBM, founder of marketing agency Resource and Ohio State graduate.
Link to Mind wide open

Pro tips for planning a graduation party
Alumni association events pros dish on the good, the bad and the ugly of planning events. Mimic their successes and chuckle along with their fumbles.
Link to Pro tips for planning a graduation party
Mind wide open
Explore the life and creative process of Nancy Kramer, chief evangelist of IBM, founder of marketing agency Resource and Ohio State graduate.
Link to Mind wide open