Laila Ujayli ’18 plans to complete two master’s degrees during her time as a Rhodes Scholar at the University of Oxford.

As told to Shelley Mann

In just the past three years, Ohio State has graduated two Rhodes scholars, given the opportunity to study at the University of Oxford and join past scholars whose pursuits led them to become legislators, policymakers, activists, writers and intellectuals.

Laila Ujayli, who graduated in 2018 with majors in English and international relations and minors in business and screenwriting, is taking a firm foundation of intellectual curiosity and mission-driven study to Oxford. “I always knew I would end up working on issues of international peace and security,” she says. “I’m a Syrian-American Muslim who lived in Saudi Arabia for five years. These issues are local to me, and something I’ve always been passionate about.” At Oxford, Ujayli plans to pursue master’s degrees in refugee and forced migration studies and world literatures. Here, she recalls her journey to and through Ohio State and reveals how she forged a degree from seemingly disparate disciplines.

I am often asked: Why screenwriting?

While my second minor seems unexpected, I view my work with narrative and foreign policy as closely intertwined. Arriving to that conclusion, however, began with a similarly unexpected question.

In one of my major courses, a peace studies professor asked my class to identify the most important film of all time. Having grown up watching the Middle East demonized in the media, I answered, “It doesn’t yet exist.” Laila Ujayli

Ohio State’s emphasis on an interdisciplinary approach prompted me to take a film studies class in which I set out to write that story. My wonderful experience in that class encouraged me to declare a screenwriting minor, and I soon discovered how much narrative enhanced my understanding of international affairs.

In a screenplay, no space exists for a long prologue that explains the history of a particular conflict, challenging me to simplify complex issues in ways that nonexpert audiences could understand. A screenplay can be a tool like a policy brief or a research report, just built for a wider audience. In the spare hour Americans have in the evening, very few will read a policy paper. Instead, most will reach for a remote or pick up a book. Consequently, the stories we tell in entertainment can become vital vehicles for information.

Unfortunately, the media has largely demonized the Middle East, with damaging consequences. When we dehumanize groups of people abroad, it makes it easier for our national leaders to rely on drone strikes to accomplish military objectives without thinking about the devastating consequences for civilians. And as the current political climate demonstrates, that same dehumanization can directly impact Arab, Muslim and refugee communities here at home. Thus, it is essential that we change the stories being told about Arabs, about refugees and about Muslims.

… it is essential that we change the stories being told about Arabs, about refugees and about Muslims Laila Ujayli 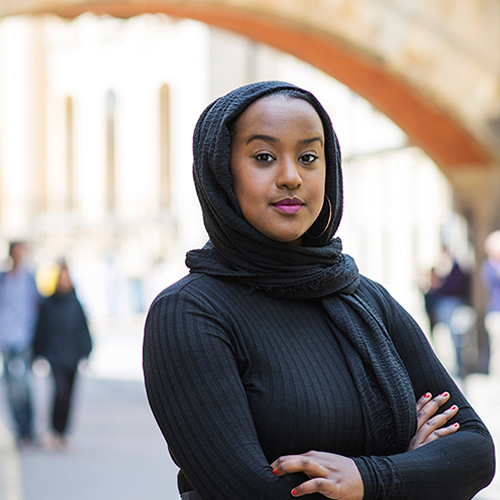 By exploring the intersection of narrative and foreign policy, I hope to add to a body of work that begins to humanize the regions directly impacted by U.S. policies, and as a result, pushes for foreign policy that does not rely on military force. This year, as a Herbert Scoville Jr. Peace Fellow at the advocacy organization Win Without War in Washington D.C., I have the opportunity to do exactly that. I am finding ways to communicate to grassroots audiences and legislators on Capitol Hill that an overly militarized foreign policy is not the best foreign policy. In order to create long-term solutions to the challenges we are facing, we must diversify our approach and invest in nonmilitary alternatives.

At Oxford, I hope to continue exploring this intersection of narrative and foreign policy. While I cannot wait to plug into an academic community
as diverse and esteemed as the University of Oxford, I am also incredibly grateful to Ohio State for allowing me the flexibility to pursue this interdisciplinary approach and to all my professors whose infectious passion for their fields inspired me to discover ways my interests intersected with theirs.

It takes a village to get an opportunity like the Rhodes, and thankfully, at Ohio State, I was lucky enough to find that village.