My kind of music

Your question about music that takes us back to our college days was easy to answer. For me, it is marching and concert band music.

I started playing the clarinet in sixth grade and was promoted to the senior marching band of Sidney High School in seventh grade.

In 1954, Ohio bands were invited to Ohio State’s first football game of the season to fill the stands. The highlight was watching the first game of Howard “Hopalong” Cassady. He scored four touchdowns to begin his quest for the Heisman Trophy.

The band really inspired me, too. However, it was all brass, and I wouldn’t qualify with my clarinet.

But in 1955, Sidney High acquired four alto horns. For the next two years, I played alto horn for football games and was first chair clarinet in the concert band. I was not a great alto horn player, but I was a great marcher.

In 1956, my friend Joe Hill and I tried out for and made The Ohio State University Marching Band as freshmen. I marched for four years, but with optometry studies taking up more of my time, I quit after playing the alto trumpet through the 1959 season.

I went to the first 20 alumni band shows and then attended sporadically. My last band show was in 2015. I still play my Ohio State records and CDs and love our band music.

Gratitude from a legend’s family

“I just received the alumni magazine with the article on my father. I don’t know who could have written my father’s tribute any better. It touched me deeply, and the Cassady family as well,” wrote Craig Cassady, son of Ohio State football legend Howard “Hopalong” Cassady ’57 (below). Howard Cassady died September 20, 2019. A remembrance appeared in our winter 2019 issue.

Your winter issue story on the new Roy Lichtenstein sculpture on campus sparked a memory. I served several years as the Central Florida Alumni Club president. Each year, with the help of Kathy Bickel of the alumni association staff, we had wonderful speakers for our annual meeting. We always presented the speaker with a meaningful gift, and I really wanted something special when Archie Griffin visited.

I was president of a wine society, too, and thought a signed Taittinger Champagne bottle designed by Roy Lichtenstein ’46, ’49 MA would be perfect.

I called Roy’s studio, explained what I wanted to do, and they put Roy on the phone. He said he would be delighted to sign a bottle for Archie and send it to me. When I inquired about paying by check or credit card, he replied that there would be no charge. He said he would be honored to help give such a great Buckeye a memento. 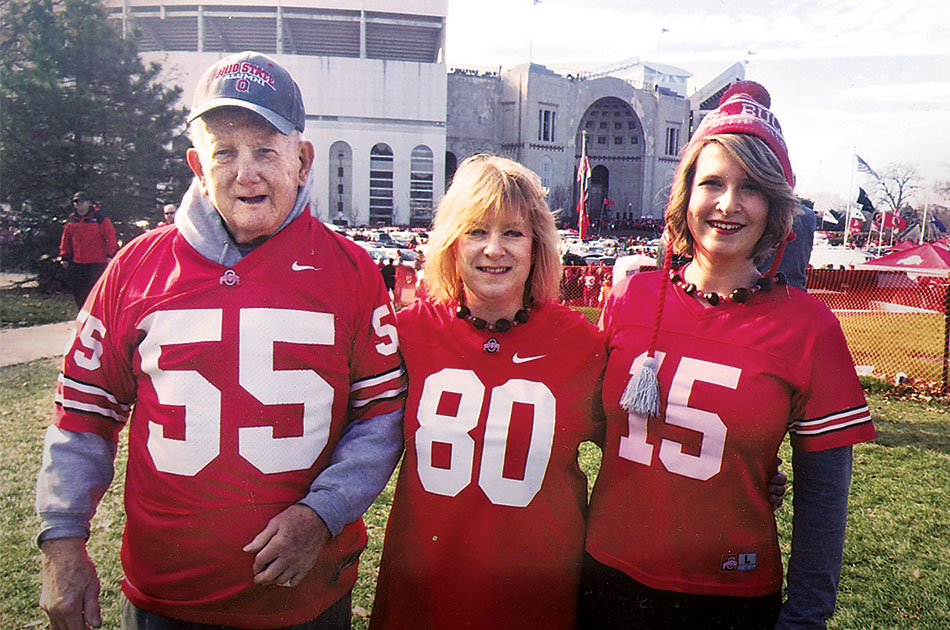 Courtesy of the Lemponen family

On graduation day, June 9, 1955, the university honored John Lemponen as the 100,000th graduate. That day, 1,864 candidates received degrees.
John was a Korean War veteran, a resident of Ashtabula, Ohio, and — from that day forward — the proud recipient of a bachelor of science degree in business administration.

John, my husband of 62 years, is now 90 years old and lives in Maple Heights, Ohio. He is a lifetime member of The Ohio State University Alumni Association and an avid Buckeye football fan and season ticket holder.