Where I live: Sandusky

You may go for Cedar Point, but you can stay in Sandusky and the Lake Erie islands for all kinds of family fun.

Talk to a group of Buckeye alums from Ohio’s north coast about Sandusky and they make the city sound like an amusement park ride that’s just building momentum. Recent development has adrenaline pumping and locals feeling like they’re where the action is, in an area ready to soar.

“There’s a tremendous growth in people living downtown,” says Dan Frederick ’88. “The restaurants and the cultural amenities in downtown Sandusky, there’s been a rebirth in that. It’s a very lively place to be right now.”

Julie Barnes Foster ’94 describes the city of 25,000 as having a “buzz.” Foster, treasurer of the Alumni Club of Erie County, thinks “people have started believing in Sandusky again.” USA Today is on board, too. The paper named Sandusky the best coastal small town in America last year.

Since 2017, a developer originally from neighboring Bay View has spent millions on vacant, dilapidated downtown buildings, renovating them for residential, commercial, entertainment and mixed-use purposes. One of these projects is the Marketplace at Cooke, something of a boutique mall with venues for axe throwing and duckpin bowling as well as a children’s museum. 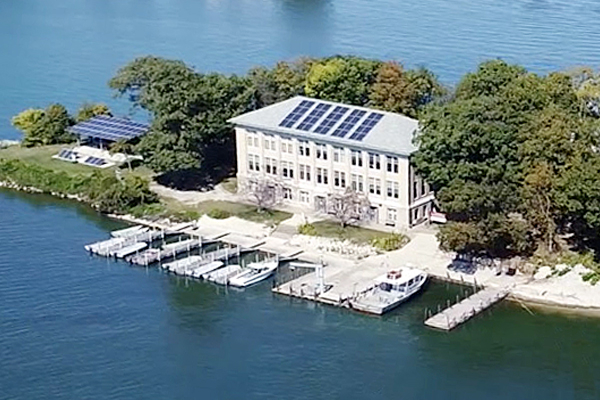 A unique science experience awaits at Ohio State’s Stone Laboratory on Gibraltar Island, South Bass Island Lighthouse and Aquatic Visitors Center in Put-in-Bay. Tours of Gibraltar are on Thursdays through the summer, lighthouse tours are the second Saturday from June through October and the visitors center is open Wednesday through Saturday. At a free open house Sept. 12, visitors can tour Gibraltar Island and Cooke Castle and enjoy fun science activities.

This follows other private projects that include the only downtown hotel, the Hotel Kilbourne, as well as public-private investments leading to a newly relocated City Hall. “They’ve really revived the downtown area,” says Hannah Oeder ’18. “You could go to dinner at one place, you could hop around. It’s a fun place where you can go try new things.”

Within about a four-block radius, other notables Bailey-Bolen mentioned were Barra, a Mexican restaurant with craft cocktails; Boomtown Coffee and Hot Dog Tony’s, whose names say it all; and the Landmark Kitchen and Bar, which hosts the Alumni Club of Erie County’s game-day festivities. Foster is part owner of Landmark Kitchen and Bar and another downtown restaurant, Shore House.

For fresh Lake Erie perch, the alumni club’s present and past presidents — John Schlessman ’74 and Frederick — recommend New Sandusky Fish Company. You’ll find it across the street from the club’s contribution to Sandusky history, Facer Park, dedicated to the Underground Railroad. Volunteers with the club have helped maintain the park for several years.

Sandusky Bay is just a stone’s skip away from all of these establishments. “With the water being right there, there’s always something going on downtown,” Bailey-Bolen says.

For years it seemed Sandusky was synonymous with Cedar Point, a fun day trip from almost anywhere in the region. Now, Frederick says, it’s not uncommon for people to spend a day at the amusement park and the rest of a week’s vacation exploring Sandusky and the surrounding area.

Downtown’s Jackson Street Pier provides a great jumping off point for adventures beyond the Erie County seat. That’s where you can grab a Jet Express ferry to Put-in-Bay and Kelleys Island.

“There’s something on both islands for everybody, I have to say. We prefer Kelleys; it’s much quieter,” Foster says, noting Put-in-Bay is always hopping near DeRivera Park and Delaware Avenue. Both islands are easily toured with rented bikes or golf carts.

“There’s nothing like Sandusky and being on the water and enjoying life,” says Jimm Corso ’67, who loves to cruise around the islands in his family’s boat.

If you’d rather enjoy the water without venturing onto it, there’s the Huron Harbor Lighthouse. It sits on a pier that juts 900 feet into the lake from the mouth of the Huron River, about 10 miles east of Sandusky. For a bite to eat nearby, Foster recommends Old Fish House and The Pier Pub.

A lighthouse flanking Sandusky on the west can be found at Marblehead Lighthouse State Park. “It’s just a beautiful spot to visit,” Frederick says. 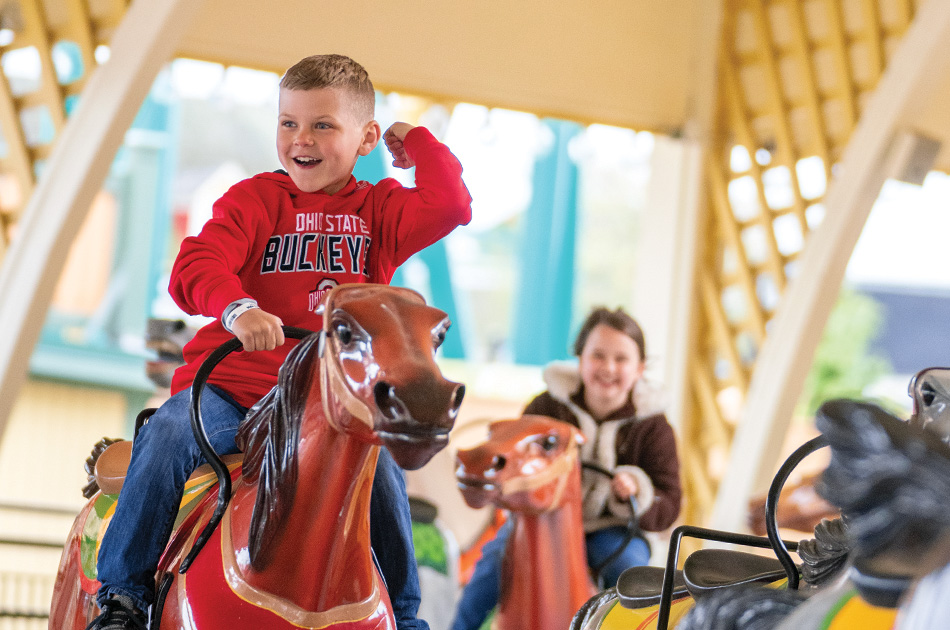 Young Buckeyes compete for first place on the Cedar Downs Racing Derby at Cedar Point. At Ohio State Day, there are lots of choices for youngsters and the young at heart.

Observe a pair of sesquicentennials

In 1870, while legislators were working on the act that created Ohio State, entrepreneurs launched the first bathhouse and beer garden at Cedar Point. You can celebrate both institutions’ 150th anniversaries at Ohio State Day at Cedar Point on May 8.

This is the eighth year The Ohio State University Alumni Association is partnering with Cedar Point to open the park a day before the start of the regular season just for Buckeyes and their friends. And while you won’t have the park all to yourself, if past attendance averages are any indication, you’ll be sharing the fun with a mere 7,000 or so of your new best friends.

“That’s a great opportunity for people associated with Ohio State to enjoy the park with a smaller crowd than you’ll normally have over the summer, along with Brutus,” says Dan Frederick, scholarship chair and past president of the Alumni Club of Erie County. It’s common, he says, for the band, athletes and other Ohio State notables to turn out. “Everybody’s wearing red; it’s a good day to be there.”

The alumni club hosts its annual banquet the evening before the Cedar Point outing. “We get some really good speakers who come in because they want to spend the night and go to Cedar Point Day,” says Julie Barnes Foster, the club’s treasurer.

The club raises money for Ohio State scholarships for area high school students and a new program exposing them to the university’s Stone Laboratory on nearby Gibraltar Island.