A story in the spring 2018 edition about Ohio State research into biomarkers drew one reader to send a letter about his own fond recollections of undergraduate research.

Reflections on early research in exercise physiology, an appreciation for radio host John Corby and more

Finding strength in our body of research

Your story on the biomarker research Ohio State doctors and athletic trainers are doing in collaboration with the U.S. Air Force (“Winning Numbers,” winter 2017), sent me back more than six decades.

I graduated in 1966 with my master’s in physical education, and at the time, exercise physiology was in its infancy. There was a small lab in the physical education building where Professors Don Mathews and Edward Fox did their research. The lab was minimally equipped compared to the one described in your story (a good thing, considering the time that has passed).

But I thought you and maybe other readers of the magazine might be interested in a very early — but, I believe, very meaningful — research study done by Drs. Mathews and Fox while I was in the master’s program. I was a graduate assistant, and so I was “encouraged” to participate as a subject in ongoing research projects. I signed up for what I later learned was groundbreaking research on the effects of heat and humidity on human physiology. My understanding was the Army was interested in the effect of these conditions on troops in basic training.

The protocol required us to run on a treadmill with three different workloads — once in a medical scrub suit, once with a loaded backpack and once wearing a full football uniform. Each time, we wore a face mask to measure max VO2 (oxygen consumption), sensors to gauge perspiration and a rectal thermometer to track core temperature. Oh, what we did for science!

It was my understanding that the data collected provided information to the Army to establish what were called “red flag events,” when heat and humidity were at such a level as to be dangerous for heavy physical activity during training. The results also proved helpful in setting limits for heavy activity during football practices, which I believe are still in use today, although I am sure the findings have been added to and improved over the years.

Ohio State was doing cutting-edge research 60-plus years ago, and Justin Moss’ article indicates it is still taking place. Having spent 40 years in higher education, I am well aware that such research is always going on, and I am proud it is part of our tradition at Ohio State.

In response to your question about favorite summer jobs (The Ask, spring 2018), I’d have to say being a member the greenskeeping staff at Ohio State’s famed Scarlet and Gray golf courses in the mid-1950s was mine. I had already caddied there beginning at age 9 (under the tutelage of head professional Bob Kepler and his wife, Gert, who were wonderful, caring people). Bob also was the university’s head golf coach for decades.

The natural progression for those of us who loved the game and these beautiful courses was to “graduate” to being a member of the greenskeeping crew and from there to have a chance to study and play golf at Ohio State.

The morning I began on the crew, the superintendent said, “Son, your job will be to set the pins and tee markers and change the ball washers every day. There’s the Jeep.” He walked away before I could tell him I wasn’t 16 yet and had no driver’s license. With 36 holes to service (and necessary equipment to lug), a vehicle was imperative, even if it was a WWII hand-me-down with a balky stick shift.

And so, I began, and I stayed and loved the job for the next three-and-a-half years, at which time I entered Ohio State, where I was on the golf team for four years and lettered in 1960.

Only in high school and at this wonderful university can one retrospectively appreciate a summer job that turned into a lifetime joy.

I was a student from 1959 to 1963 and worked many, many jobs. The best clearly was the last one of my senior year — at Don Scott Field, the university airport. I grew up with a fascination and love for aviation and, thanks to the Air Force ROTC program at Ohio State, I learned to fly at Don Scott Field — so to also work there was a special bonus. This experience led to a spectacular 30-year career in U.S. Air Force and memories that will last generations. Thanks to Ohio State for all those opportunities and the many great memories.

Hats off to the team

The spring 2018 edition of Ohio State Alumni Magazine jumps off the page with its new format, improved photography, range of content and general “curb appeal.” I have been reading the alumni magazine for almost exactly 40 years, and it has never been better. Hats off to the team for its writing, editing, photography, art direction and design.

Such good times with this gentleman

Your article “Special land links us in time” (The Legacy, spring 2017) explains how “the artistic touch of two legends is always in view” at The Ohio State University Golf Club. For the Rogers family, there is a third legend, who these days is in view only in our memories and hearts: my grandfather Gene F. Rogers.

A beloved father, grandfather and decorated World War II veteran, “Papa” passed away on January 15, 2016, at the age of 92. Shortly thereafter, when our family discussed how we could honor our beloved Papa, a donation to the golf club was the obvious choice.

Aside from family, there was nothing Papa loved more than golf. He spent almost every day at the club for 40 years, spreading his infectious love for the sport. Papa was admired not only for his dedication to golf (he continued to play into his nineties), but he also was known for bringing smiles and laughter to fellow patrons.

Our donation was a 15-foot-tall clock, unveiled on July 4, 2017, on the driving range between the first tees of the Scarlet and Gray golf courses. The dedication reads:

“The family of Gene F. Rogers, 1923–2017, dedicates this clock to honor his life, commitment to the game of golf and beloved OSU family. A familiar face around the course, Gene was legendary for his litany of golf-related quips. After sinking a long putt, he would comment, ‘I’d rather be lucky than good!’ But we were the lucky ones to have had him in our lives for so many years. Make Gene happy, be lucky rather than good, and sink a long putt today. July 4, 2017”

With more than 20 Ohio State alumni in the Rogers family, I speak for all of us when I express how honored we were to donate this memorial to a university that has given us world-class education and, particularly for Papa, so much joy. Now when we visit the golf club or drive down Tremont Road, we are reminded of the man we cherish and miss tremendously.

Afternoons with John Corby ’78 saw me through some of the most difficult days of my life.

I had listened to John’s “Big (fill in the weekday) Radio Program” on 610 WTVN for years when I could. But family life, to a great extent, often kept me away from his 3 to 7 p.m. show. Like many people, I spent those hours after work with my wife, catching up and making dinner. Then, in late 2016, I lost my wife of 41 years to cancer. I was retired by then, and one of my kids was living on her own and the other was on campus at Ohio State (much to her father’s delight). 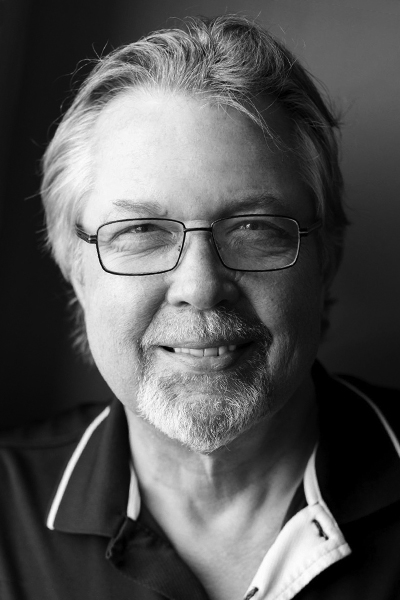 Much to her father’s chagrin, though, these developments left me alone — with no companionship, interactions or way to process the information my wife and I discussed daily. After a short time, I started listening to John’s program, and the results were spectacular. To a large degree, John’s show filled a huge emotional void in my life.

His droll, easygoing, southern Ohio style was appealing and appreciated. John was so human, warm and comfortable to listen to that he made a difficult job seem easy. Typical of John’s unpretentious nature, he once told a colleague that he worked very hard to “not suck” while on the air.

When John died from complications from the flu earlier this year, his station colleague Sterling hosted an emotion-filled call-in show. Not usually one to tear up, I cried through the whole thing. The outpouring of love and fondness for John was overwhelming, not just for me, but for hundreds who responded. I learned that as listeners and fans, we were all a family — John’s extended family. I found that the humanity that others displayed also was my humanity. John brought this out in us. Thousands of people with very diverse backgrounds were able to relate to each other through John, even though we didn’t know one another.

His call-in topics, The Big Bass Brothers restaurant review and on-air shticks such as the Birthday Challenge and Big Deal, No Big Deal were truly legendary for their inventiveness and deeply human, self-effacing humor. John was an outstanding broadcast professional. Through his philanthropy, humanity, humility and humor, he used his Ohio State degree to make thousands of Buckeye alums and others in central Ohio proud to call him their friend.

For me, John helped fill a void left by the loss of my beloved wife, giving me a chance to heal. I will always be grateful.