Earle Bruce raises his signature fedora to the crowd at Ohio Stadium on Oct. 1, 2016, when he dotted the "i" during the Ohio State-Rutgers Homecoming game.

Loyal all his days

Those words were never really a question when spoken by Earle Bruce ’53. They were a point of emphasis as he leaned into you, eyes ablaze, his finger jabbing your chest.

If you listened — really heard him — you learned something.

You learned about love.

Oh, the details of a Bruce message of yore might be lost, in the same way plays blurred together across years into the precise measurement of a career that landed him in the College Football Hall of Fame and Ohio State Athletics Hall of Fame.

Yet his death spurred a more impassioned recounting of his values than the dutiful recitation of statistics. 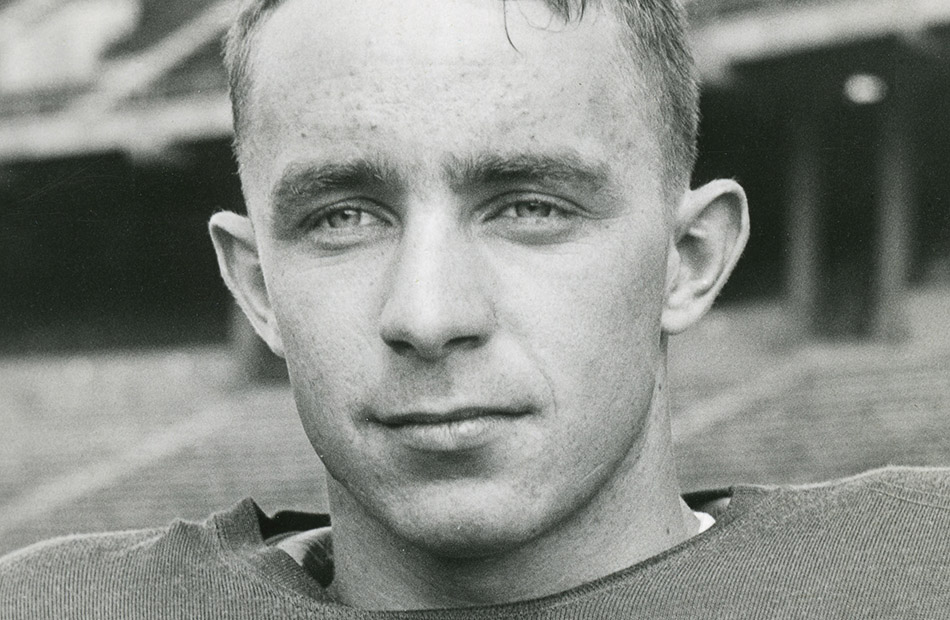 Earle Bruce as a freshman at Ohio State in 1950. A knee injury ended his playing career the following year. Courtesy of University Archives 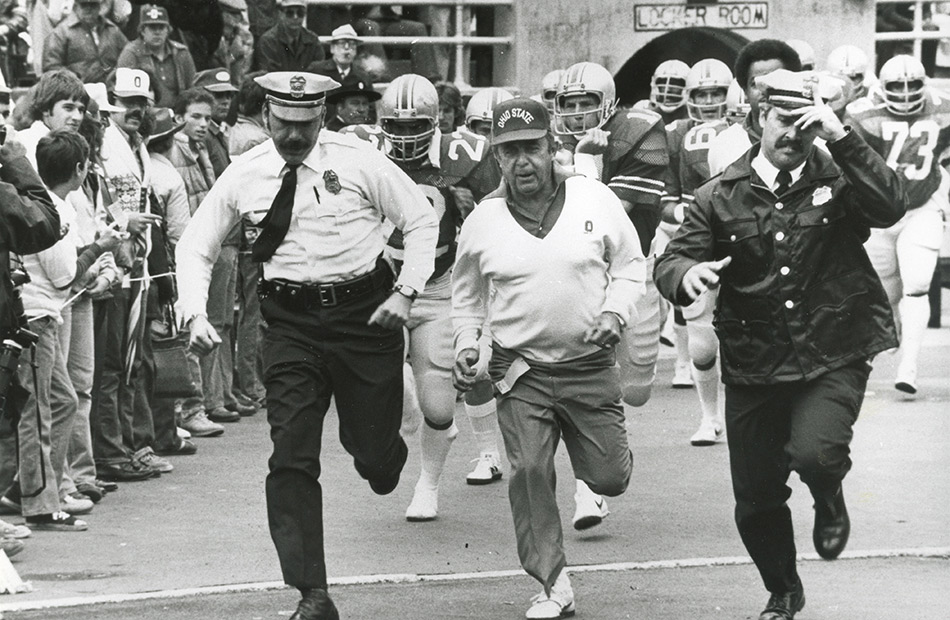 The Buckeyes are led onto the Ohio Stadium field by Earle Bruce. He replaced Woody Hayes in 1979 and led Ohio State to the Rose Bowl in his first season. Courtesy of University Archives 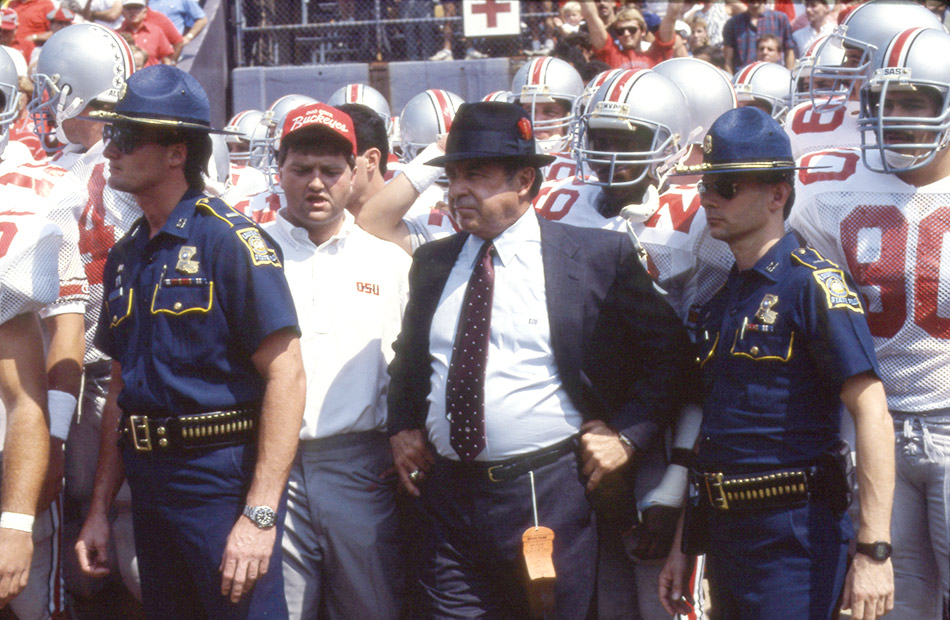 Earle Bruce’s fedora became part of his legend while he went 81-26-1 in nine seasons as Buckeyes head coach from 1979 to 1987. Courtesy of University Archives 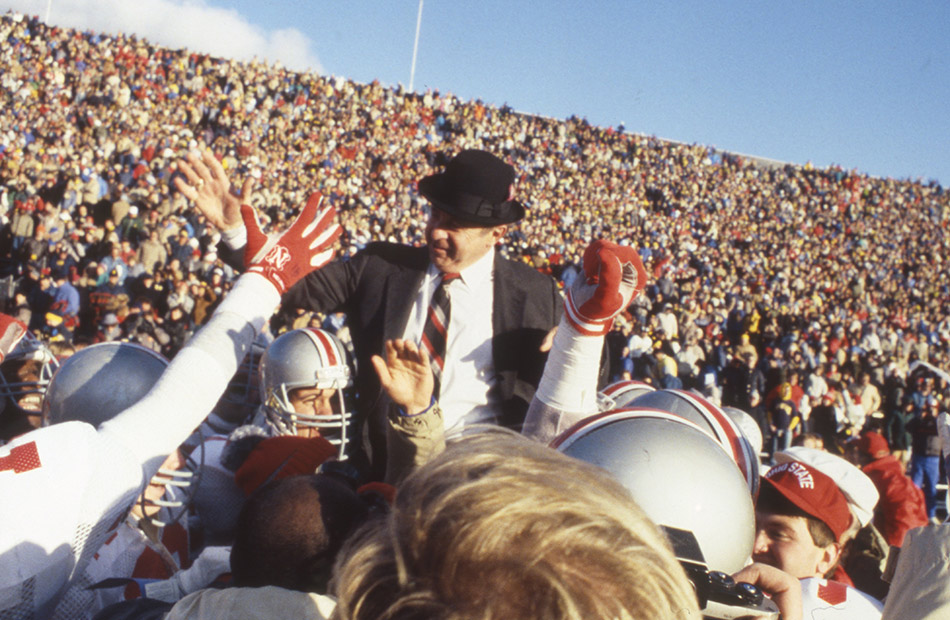 The Buckeyes carry Earle Bruce off the field at Michigan after a 23-20 win in his final game as Ohio State coach. He went 5-4-1 against the Wolverines. Courtesy of University Archives 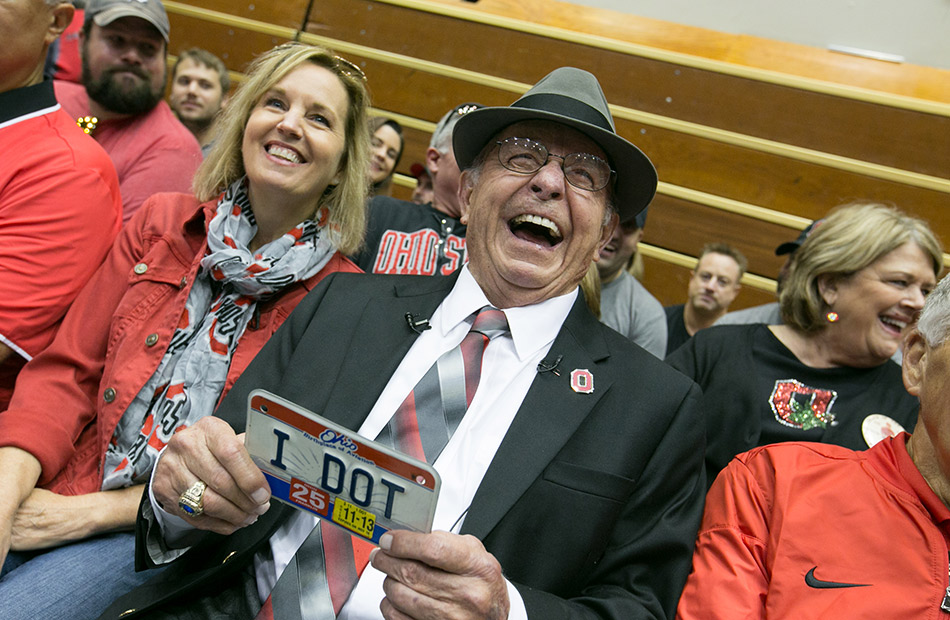 Earle Bruce enjoys a laugh at a Skull Session on Oct. 1, 2016. Later that day he dotted the “i” during halftime of Ohio State’s victory over Rutgers. Jo McCulty
Previous Next

“Loyalty was his greatest asset, at times to a fault,” says grandson Zach Smith, Ohio State receivers coach. “If he had your back, he had it forever.”

Bruce was married to his late wife, Jean, for 56 years, and their love shines through their four daughters and nine grandchildren, each of whom he treasured dearly, even in the grips of Alzheimer’s.

“He kissed a grandkid on his final day, recognizing the voice even when he couldn’t remember that an apple was his favorite fruit,” Smith says.

Bruce’s love for Ohio State was equally durable, even when his coaching path took him miles from campus to stints at the University of Tampa, Iowa State, Northern Iowa and Colorado State. “He was a Buckeye. That’s what Earle always said, ‘I’m a Buckeye,’” says Jim Lachey, a star offensive lineman for Bruce at Ohio State.

The coach professed that loyalty despite moments of pain, heartache and disappointment at Ohio State, dating to a knee injury that ended his playing career in 1951. “He did not have a path that was clear,” says Jim Tressel, the former head coach who served as an assistant for Bruce.

Sometimes Bruce was left muttering under his breath while toiling as an assistant for the relentless Woody Hayes, the beloved icon he eventually replaced. “Pushed beyond his limits at times only made his love stronger,” says Urban Meyer, the Buckeyes’ current coach and a former Bruce assistant.

Love is why acrimony didn’t linger after that ugly week in November 1987 when Ohio State fired Bruce, but allowed him to coach the season’s final game. The Buckeyes carried their mentor off Michigan turf following that 23–20 upset, a day after Bruce had quietly filed suit against then-President Edward Jennings and the university.

The man in the fedora didn’t fade away in bitterness.

Instead, Bruce evolved into a tough yet tender grandfather figure for Ohio State during 23 years as a Columbus sports radio analyst. He was a fixture around the football program, always finding time for coaches, players and fans.

“That’s what an alum is supposed to be, just what he turned out to be,” Tressel says. “He came here and ended here. That’s the definition of an alum.”

Bruce will live on in his work for the Earle and Jean Bruce Alzheimer’s Research Fund in Neurology at Ohio State, which in the past decade has raised $1.2 million to combat the cognitive disease that afflicted several members of his family.

Such a legacy is worth a fist pump, the type Bruce gave at midfield Oct. 1, 2016, while dotting the “i” for The Ohio State University Marching Band at halftime of the Buckeyes’ victory over Rutgers.

In the end, love triumphs.

All Buckeyes heard you, Coach Bruce.

Donations to the Earle and Jean Bruce Alzheimer’s Research Fund in Neurology support research into the disease, which affects an estimated 5.7 million Americans. Bruce revealed he had Alzheimer’s in 2017. 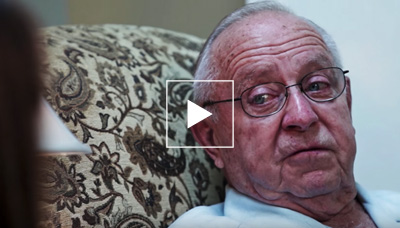