Drew McCartt '88 MS has become a champion of heart research.

Near and dear to his heart

Tucked securely in Drew McCartt’s pocket nearly every time he leaves home is the same type of artificial valve implanted in his heart.

The circular device is about an inch in diameter and has two half-moon flaps that open and close, allowing it to push blood from his heart to the rest of his body.

“It’s one of my most of prized possessions,” he says with all sincerity. Then he jokes, “Plus, it’s always nice to have a backup.”

McCartt ’88 MS uses the device to show most everyone he meets how medical research can lead to life-saving inventions. This one, he points out, has been keeping him alive for 30 years.

In 1988, the newly married Ohio State graduate student was working on a research project when his cardiologist called. McCartt pauses at this point in the story, noting it was not a member of the doctor’s staff calling, but rather the physician. McCartt knew the call was important.

Dr. Samuel Kaplan was a pioneer in congenital heart disease research and treatment, and at the time was based at Cincinnati Children’s Hospital, near McCartt’s hometown of Monroe, Ohio. He told his patient the heart valve replacement surgery they had been delaying for a decade needed to happen. And soon.

The surgery would be June 10, 1988. McCartt had other plans for that day: He was to march in commencement at Ohio Stadium to accept his master’s degree in fresh water aquatic management. McCartt would have to postpone the pomp and circumstance.

“It’s the news I’d been waiting for,” he recalls, “but not waiting for.”

The wait started in 1977 when McCartt was 15 years old. During a routine sports physical, his physician heard something unusual when listening to his heart. The doctor diagnosed him with aortic regurgitation, meaning the aortic valve didn’t close tightly and allowed some of the blood being pumped out of his heart to leak back in.

The teen wasn’t in immediate danger, so doctors decided to delay surgery and wait for science and technology to catch up to the procedure McCartt needed. He carried on as he had before, running track and cross country in high school and later as an undergrad at the University of Tennessee. He even tackled marathons and triathlons.

But an annual checkup in 1988 revealed McCartt’s heart was getting too large, a result of the faulty valve. It was time for the wait to end. So rather than walk in commencement, McCartt was wheeled into an operating room for surgeons to implant a bileaflet valve produced by Abbott Laboratories. 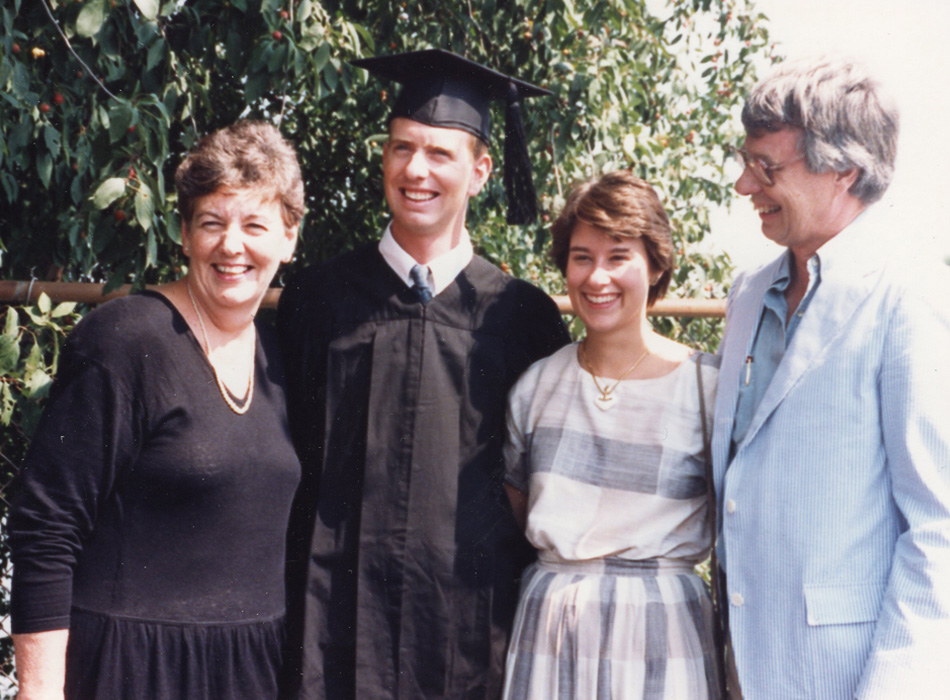 Drew McCartt, second from left, with family and friends on graduation day

His initial role on the education and programming committee evolved to service as a board member, which he’s been providing for almost 25 years, including two years as president. He’s also been active in the organization’s many premier events, including the Central Ohio Heart Walk, the annual Heart Ball and the Go Red luncheon to bring attention to heart disease among women.

McCartt soon realized he had a knack for fundraising. He’s helped generate more than $1 million for the organization, including about $76,000 during campaigns marking the 20th and 25th anniversaries of his surgery.

“Drew’s passion and dedication are priceless to the organization,” says Brenda Houston of the association’s Great Rivers Affiliate. “It’s hard to put a dollar amount on what he has raised for the American Heart Association, because he has been involved indirectly in so many aspects.”

To observe the 30-year mark, McCartt has raised more than $104,000 for the organization through his Give and Let Thrive campaign. The money will help fund cardiac research at Ohio State and Nationwide Children’s Hospital.

“Research and advancement really saved his life,” notes Krista Barber, who works in communications for the local affiliate. “He can say: Listen, you can hear my valve click. That story really drives people, because he’s there, he’s alive.”

Maybe it’s that audible evidence of the valve in his chest that has clicked more than 800 million times since 1988. Or the “backup” in his pocket that he allows people to hold, an incredible invention so marvelous in its simplicity. Or the passion in his voice. Or the business (slash campaign) cards he hands out to most everyone he meets.

Whatever the hook, McCartt has an ability to connect in a way that brings friends and strangers to a decision to donate. 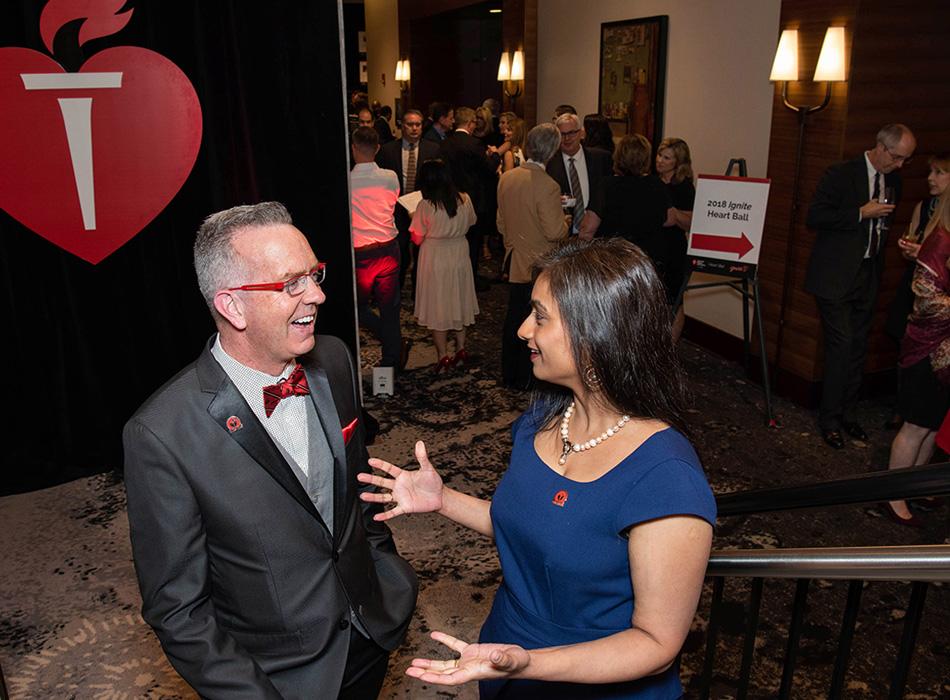 Drew McCartt and Dr. Laxmi Mehta catch up at April's Heart Ball for the American Heart Association. Mehta is a professor of medicine and section director of preventive cardiology and women’s cardiovascular health. 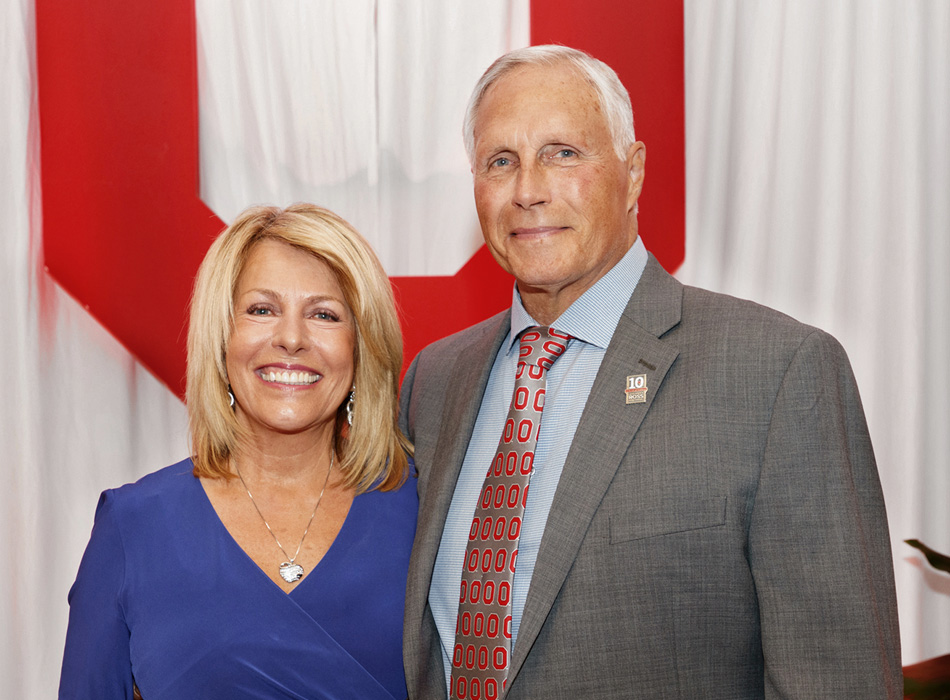 Heart disease has shadowed Bob Frick’s family for generations. Both of his parents, two brothers, his daughter, three uncles and an aunt all have faced it. He had a heart attack at age 40 and underwent triple bypass surgery at 51.

Bob and his wife, Corrine, want better for other families. That motivated them to support the establishment of an Ohio State center that will be the first in the nation focused on treating patients experiencing both heart failure and arrhythmia.

Housed within the Ohio State Wexner Medical Center’s Heart and Vascular Center, the Bob and Corrine Frick Center for Heart Failure and Arrhythmia will provide an integrated experience in which patients can see heart failure and arrhythmia teams in one location, treatment decisions are coordinated, and research and learning about the two diseases are connected with patient care.

“I wouldn’t be here without the expert care from my cardiology team at the Ross Heart Hospital,” says Bob Frick, who has had several ablations for two types of irregular heart rhythms and now has an implanted defibrillator. “Maybe someday they can find a cure, and in the meantime, we can support them as they find new ways to help patients live well.”

The couple's $18 million gift will provide support for leadership of the center and life-changing research and education about the connection between heart failure and arrhythmia.

Staff of the Frick Center will begin seeing patients later this year. 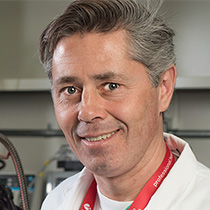 From lab bench to bedside

An Ohio State research team’s discoveries are creating solutions for patients today and hope for the millions of people who will follow.