James Thurber, photographed in 1916 during his time at Ohio State, is framed here by an unpublished cover design he created for My Life and Hard Times, one of his most famous books. Both the art and the photo are held in Ohio State’s Rare Books and Manuscripts Library.

A pair of exhibitions honor the legacy of James Thurber.

It’s been 125 years since author, humorist and cartoonist James Thurber was born in Columbus, so younger generations can be forgiven for not immediately recognizing his as a household name. Yet the author of The Secret Life of Walter Mitty and New Yorker writer and artist was widely considered the most influential and singular comedic voice of his time.

Anne Touvell, deputy director of Thurber House (a nonprofit literary arts center and museum in Thurber’s former home on the Near East Side of Columbus), explains that the yearlong Thurber 125 celebration is designed in part to reinvigorate his legacy. “He’s credited with changing the face of modern cartooning to the ‘quick drawing with one-liners’ style. He perfectly captured the follies of human nature — and the stoic wisdom of animals. He’s timeless; there’s something in his work for everybody.”

Thurber attended Ohio State for five years, though his poor eyesight kept him from completing an ROTC component and graduating. The university posthumously dedicated Thurber Theatre in Drake Performance and Event Center in 1972 and awarded him a Doctor of Humane Letters degree in 1995.

This year, Columbus will pay homage with a yearlong celebration featuring a pair of exhibitions: Thurber’s Columbus, through August 18 at Thompson Library Gallery at Ohio State (which possesses the world’s largest collection of Thurber materials), followed by A Mile and a Half of Lines: The Art of James Thurber, August 24 through March 15, 2020, at the Columbus Museum of Art, with a companion book from The Ohio State University Press.

Jolie Braun, University Libraries’ curator of modern literature and manuscripts, muses, “My starting point was thinking about his relationship with the city, how invested he was in writing about Columbus. I think in some ways the idea of people depicting the Midwest and writing about it is still not a common thing — we often get left out. But it was a lifelong inspiration for him.”

Braun shared a sneak peek of (and insights into) five bits of the Ohio State exhibition’s ephemera. 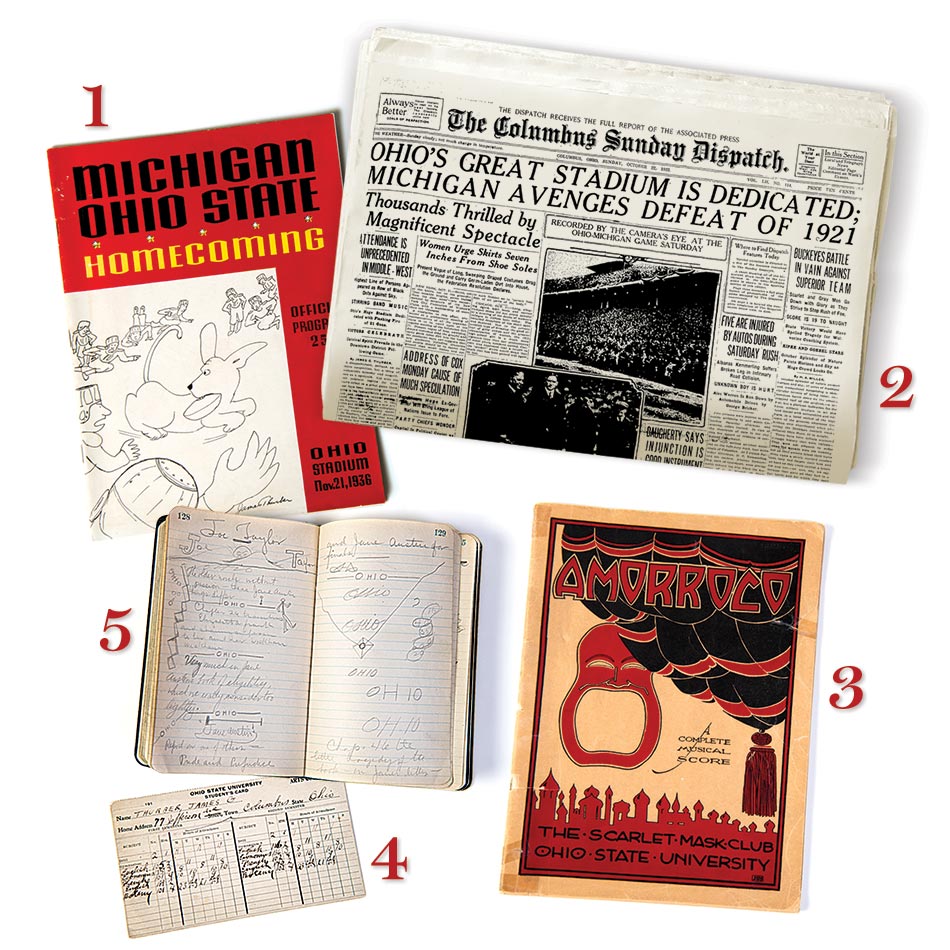 “Thurber was not a football fan, so I find this to be funny. The Henry Fonda character [in the 1942 film version of Thurber’s play ‘Male Animal’] is probably based on Thurber — a lone figure in a sea of football maniacs.”

2. An article he penned for the Dispatch about Ohio Stadium

“It’s so cool that he had written about the opening of the stadium. He can’t get away from it!”

“After he left Ohio State, he worked at The Columbus Dispatch, but was still involved with the university’s Scarlet Mask Club comedy musical troupe. He supplemented his income writing these plays. It speaks to his love of comedy and theater.”

“He’s enrolled in English (and botany, which is a disaster), as told in ‘University Days,’ a fantastic story of his foibles during his time at Ohio State. The problem was his eyesight, after being blinded in one eye as a child. He’s having to look into a microscope, so he struggled.”

5. A notebook Thurber kept as an Ohio State student

“We’ll exhibit the page featuring his schedule, where he’s listed his classes and extracurricular activities; you can see he’s involved with The Lantern, Phi Kappa Psi fraternity and The Sundial [humor magazine].”

Brooke Preston is a lifestyle, culture and comedy writer based in Columbus.