Andrew Thomas is chief clinical officer of Wexner Medical Center and a faculty member in the College of Medicine.

Leading the way from a pivotal role

Chief Clinical Officer Andrew Thomas shares insights on the preparations of his university, city and state.

Responding to massive challenges such as the coronavirus pandemic requires the ability to skillfully perform as part of an ensemble cast. It’s hard to imagine anyone better suited for the role than Andrew Thomas ’95 MD, ’00 MBA.

As chief clinical officer of The Ohio State University Wexner Medical Center, Thomas already had close relationships with many of Ohio’s key players, both inside and outside the university. It’s a network he has helped cultivate in his 29 years at Ohio State.

Thomas honed his expertise in patient care in more than two decades of work in internal medicine. A master’s in business administration gave him crucial insights into leadership as well as a deeper understanding of the supply chain challenges the pandemic would present. And the value he has long placed on people and relationships enabled him to expedite decisions in collaboration with trusted partners.

This Buckeye’s path to that broad base of experience began with an early appreciation for doctors and their work. Growing up in the northeast Ohio village of Louisville, Thomas recalls the admiration his grandparents had for their physicians, and it influenced him to begin weighing a career in medicine as a young boy. After earning his undergraduate degree at Harvard, where he studied science and history, he pursued his medical degree and residency at Ohio State.

When talking about Ohio’s COVID-19 response, which began in January, Thomas speaks of his own role only to illuminate the rapid, synergistic work of a greater team. In a recent interview, he spoke about how the university and medical center approached preparations, how early decisions helped Ohio flatten the curve and how he came to occasionally share time with Gov. Mike DeWine and Dr. Amy Acton ’96 MPH during the daily coronavirus news briefings that became a focal point for many Ohioans. 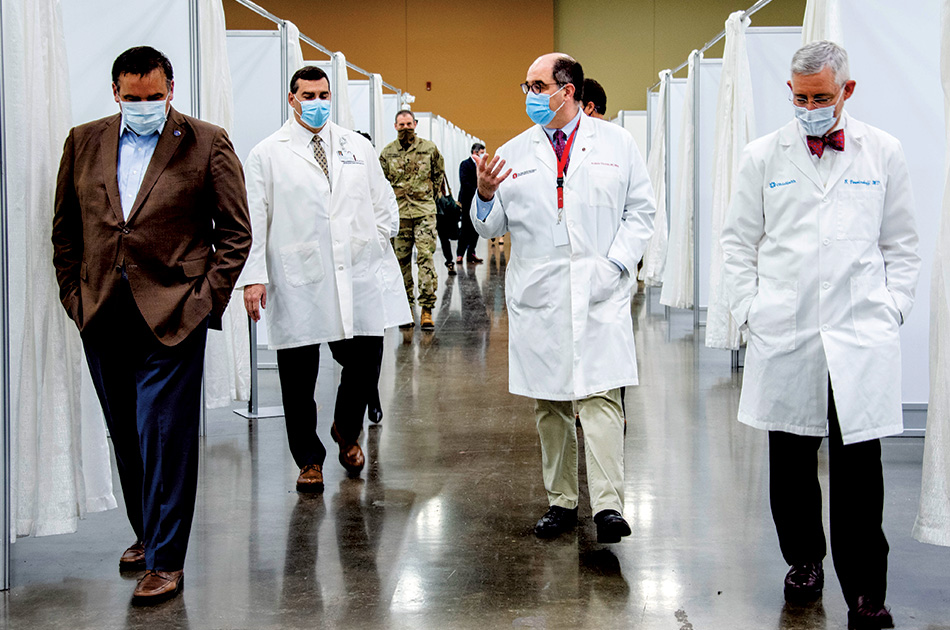 Courtesy of the City of Columbus

How did the university and medical center conceptualize their response to the pandemic?

We knew that we needed to prepare in three separate ways, and all of them needed to be aligned.

One is as a health care institution. Obviously, we take care of patients from across the state, across the region. Another is as an employer, one of the largest employers in Ohio. And third is as a community. We provide housing to students, so we have an infrastructure here for everything from how people learn to how they get their meals to how they exercise. We needed to prepare just like any city might prepare.

When the first case was announced in the United States, we had a conference call the following day with about 80 people who really spanned the entire university. We were looking at a global pandemic that would put a different set of stresses and strains on the system. When we think about the three big buckets of preparedness, they’re known as the three S’s — staff, space and supply chain.

What were some of the serious problems you ran into early?

One of the weird variables of this outbreak was our supply chain disruption, since China was the first country where the infection became evident. But there are other pieces and parts of our supply chain that come from Italy or other countries that have also been affected.

And that’s just on the supply side. When you think about the demand side, it’s not just hospitals in central Ohio or Ohio that needed more personal protective equipment. Hospitals across the country and the world were all trying to buy the same stuff. So the supply side was down and the demand side was up, which you can imagine makes for a lot of complexity.

From a staff perspective, one of our big contingencies was based on the fact that our staff is just as much at risk of becoming ill as anyone in the community. We needed to be prepared for staff absences due to illness.

And then from a space perspective, really it was a relatively quick assessment of how we could handle what are called level one, two and three surges. With a level one surge, you open up kind of routine care spaces but use them for different purposes. A level two surge is when you start taking other sorts of care spaces inside your walls and using them for COVID-19 care. And then a level three surge is when you break outside your walls and look for an option in the community to provide care.

Looking back, what do you see as some of the central decisions that helped Ohio address the pandemic?

One of the first difficult decisions was to limit the scope of the Arnold Classic and fitness expo. That decision was made at a time when we had zero cases announced in Ohio.

I was at the table with a number of other people for that discussion, and I’m just grateful that the mayor and governor made the really tough decision to forego what was a huge economic boon to our community. I think it was clear that the disease was already in our area, in our state, at that time — we just hadn’t found the right person to test yet to prove it was here.

And then I think the university’s decision to close campus was another saving grace for this community, when you think about the thousands of people who would have been living in close quarters.

How did your business education factor into the role you have played in the response?

Fisher College of Business was a great learning experience for me. It was incredibly valuable as an adult to study outside of medicine after seven years of medical school and residency and for two years be surrounded by people who thought differently, who saw the world differently than I did.

When I think about the ability to break up a complex problem into its component parts, come up with ranges of solutions for each one of those parts and then kind of marry it back into a solution that fits the whole problem — that’s a really important thing I learned in my strategy classes and other business classes.

So I think it gave me a different perspective on how to see the business of medicine and the world in front of me that has really benefited me over the years.

In this medical center setting, managing complexity is a really important part of taking care of a large organization. That’s all part of the way that business school helps you think in a different way about how that complexity works, and how you can push a button here or pull a lever there and make sure you get the ultimate outcome that serves the organization.

Beyond your work in hospital administration, you teach in the College of Medicine and also see patients, correct?

Yes, that’s true. During spring semester, I taught a course in the biomedical sciences honors program for undergraduate seniors who are mainly going on to medical school. I’ve taught that course for 10 or 11 years. So we met every Tuesday and Thursday using Zoom. And I still see patients, which is very important to me. Most of us in primary care and even a lot of specialties transitioned to do more by phone and video with our patients.

How did you come to play such a central role in the response outside of the university?

That’s part of the benefit of having been at Ohio State for 29 years. I have a lot of longstanding and deep-seated relationships in the community, such as with other chief medical officers in town or the CEO of the Central Ohio Trauma System.

A lot of that comes from building strong relationships and a good network of people. I don’t need to stop and explain myself every minute because people know me and they know how I work and communicate. So when I say, “Please do this,” there’s a lot of trust there.

When it comes to advising folks at the Ohio Department of Health or through state government, I also had pre-existing relationships with a number of the people. So I kind of start out with a level of credibility, which is helpful.